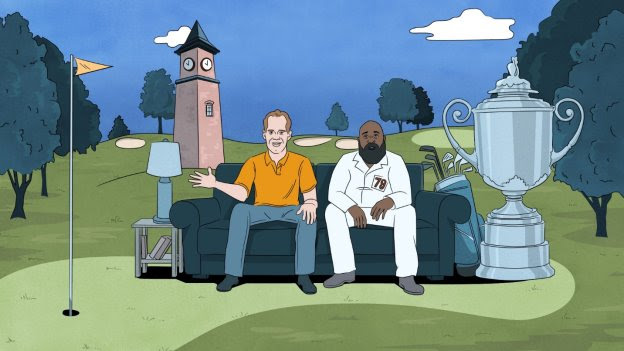 The new telecast, produced by ESPN in collaboration with Peyton Manning’s Omaha Productions, follows the success of the innovative and critically acclaimed Monday Night Football with Peyton and Eli alternate telecast this past NFL season.

The alternate telecast will be hosted by Joe Buck, who recently joined ESPN to anchor Monday Night Football next season, and ESPN senior golf analyst Michael Collins, the host of the ESPN+ program America’s Caddie. Buck will be making the first ESPN appearance of his new deal.

PGA Championship with Joe Buck & Michael Collins will air during all four days of competition in the May 19-22 tournament and feature an array of guests to offer running commentary and conversation as live play in golf’s second major of the season unfolds at Southern Hills Country Club in Tulsa, Okla.

Peyton and Eli Manning will be among the guests on the telecast during the tournament. Other guests who will appear across the four days of coverage will include Troy Aikman, Josh Allen, Charles Barkley, Fred Couples, Jon Hamm and ESPN’s Doris Burke with more guests to be announced later.

“Working with Omaha Productions, we are producing a telecast that is designed to reach a new and different audience and elevate the appeal of the PGA Championship even more,” says Lee Fitting, ESPN senior vice president, production. “We feel that this will ultimately help grow our viewership and provide fans with another fun and creative way that they can enjoy sports.”

“We loved doing Monday Night Football with ESPN and the entire Omaha team has been looking forward to producing alternate telecasts that celebrate other sports,” says Peyton Manning. “As one of golf’s majors, the PGA Championship is a perfect place to do our first one for golf and we look forward to working with Joe, Michael and everyone in ESPN’s golf team.”

In the third year of an 11-year deal with the PGA of America, ESPN and ESPN+ will present more some 230 hours of live coverage of the PGA Championship including traditional coverage as well as Featured Holes and Featured Groups.