A new cultural center in the historic Galician city of Lugo has been equipped with a AV solution by systems integrator, Chemtrol. At the heart of this installation and ensuring flawless communication across the Auditorio de Lugo’s two performing arts halls is a 32-port ODIN OMNEO digital intercom matrix by RTS.

Auditorio de Lugo is a large cultural complex, covering more than 15,000 square meters. It has been built to host a variety of events, from concerts, ballets and theatrical productions to conferences and presentations. As such, the venue is divided into a variety of spaces, including two performing arts halls (an auditorium with 900 seats and a theater with a 300-person capacity), an exhibition and congress area, a music school, a media library, a projection room, eight training rooms, a commercial area, a restaurant, an office area and underground parking. 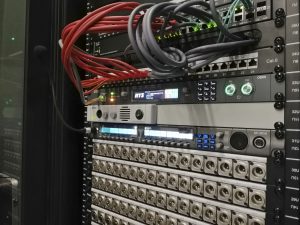 Providing crystal-clear communication between the 20 intercom stations in the various spaces is an ODIN intercom matrix. Chemtrol opted for the 32-port option which also provided the ability to expand the system up to 128 ports within the single 1RU device. With the audio system for the whole venue running over a Dante network, it made sense for Chemtrol to use ODIN’s ability to seamlessly communicate with Dante audio via the built-in OMNEO IP architecture to connect the intercom system to the wider network. This allows simple communication between the front-of-house gallery position in either hall with their RTS DKP-3016 desktop keypanels and the wings which have a rack-mounted KP-3016 keypanel for both performance spaces.

Complementing the solution is a classic partyline intercom installation which has been deployed in both halls. RTS takes pride in the backwards compatibility of its products, which meant the partyline system was able seamlessly connect to the main ODIN intercom. A PS-20 two-wire intercom power supply drives the partyline solution, while BP-4000 single-channel universal beltpack headset stations are called on by the users. 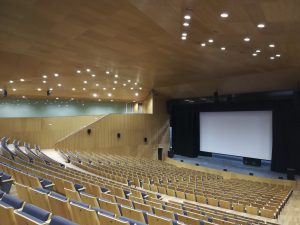 In addition to these fixed points, the venue also invested in a ROAMEO DECT-based wireless intercom system for mobile users, including AP-1800 access points and TR-1800 beltpacks. The venue has six wireless stations which connect back into the digital audio network and allow clear communications between many users across the whole venue.

As well as its flexible connectivity options, the ability of ODIN’s OMNEO networking to seamlessly communicate with Dante audio devices formed another vital element of its selection. In addition to this, ODIN’s four-wire connectivity will allow integration with more traditional broadcast intercom systems while its RVON IP connectivity will be a powerful solution for connectivity over greater distances if required.

The integration project itself presented several challenges. With the construction of the building completed long before any decision was made on the AV equipment to be installed, Chemtrol worked to retrofit its design without damaging the finished look of the venue. The integrator also wanted to create a very powerful infrastructure that used the latest technology and could adapt to future innovations. This led to the creation of a dense network of Cat-6 data cabling and OM3 fiber optics. ODIN perfectly fitted with this concept thanks to its versatile connectivity options and its future-proof design for evolving systems.

The result is a powerful solution that exactly meets the needs of Auditorio de Lugo. Thanks to its flexible and scalable intercom system, the venue will be able to meet the needs of productions of any scale, while always delivering flawless audio.