Iron Chef: Quest for an Iron Legend pits five Iron Chefs against Challenger Chefs in the show’s reimagined ‘Kitchen Stadium.’ The most successful Challenger returns in a finale for the chance to become the first-ever ‘Iron Legend’. 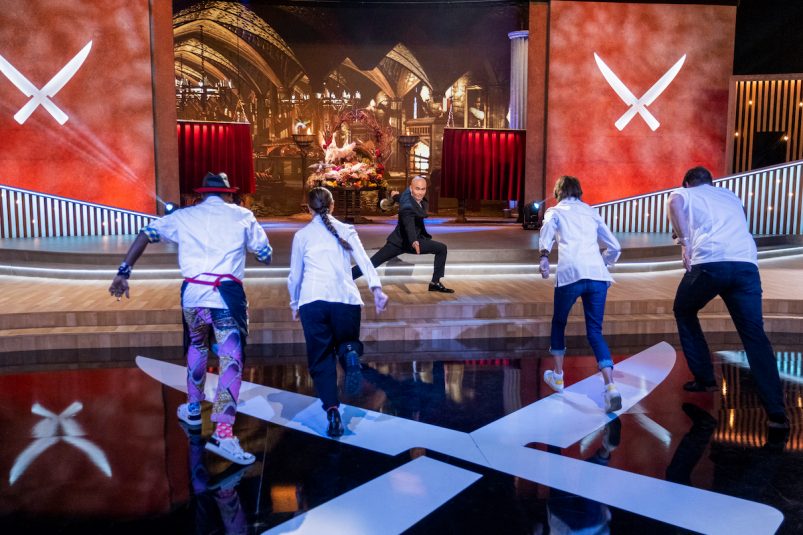 The competition’s unique culinary tasks take the contestants around the world and through different cuisines, with each episode featuring a Secret Ingredient. To elevate visual engagement, Silver Spoon managed the installation and operation of a large-scale LED volume inside the “Secret Ingredient Chamber,” extending the practical set into vast, virtual worlds.With a challenging timeline, the team prepared eight unique 3D environments in Unreal Engine, ranging from underwater scenes and chili fields to a street food market and a medieval feast.

Throughout the three-week, eight-episode shooting schedule, Silver Spoon provided AR & XR operation, with real-time compositing via Pixotope and camera tracking via Stype for four tracked cameras. Silver Spoon’s key challenge was to seamlessly integrate AR and XR workflows during shooting. Pre-production planning and collaboration among all departments proved to be the key to successfully incorporating virtual production technologies into the classic Iron Chef format.

Laura Herzing, Executive Producer at Silver Spoon, said: “Executed 100% live and in camera, AR and XR can really push the visual boundaries of unscripted television. We are proud to have created something totally unique for Iron Chef, a show that has such a well-established past. I’m excited to see virtual production continue to push further into the mainstream of media production, and explore what this means for the future of TV.”

Eytan Keller, Executive Producer & Director of Iron Chef, said: “To help reimagine Iron Chef and introduce it to a new generation, we proactively chose to integrate the dynamic cinematic look and feel that is made possible by AR and XR graphics and technology. This transformative visual impact has elevated the format into something modern and fresh, while staying true to what makes Iron Chef great. Kitchen Stadium has never been more spectacular. The seamless integration of the real-world and the virtual world is the future of television production and we’re thrilled that it has been such a success as we revitalize this classic franchise.”