The 2022 Men’s College World Series (MCWS) has been defined by two themes: programs that fulfilled the public’s preseason hopes by clinching a spot as a ranked team and those that have shocked the college-baseball world as an unranked squad. With the final best-of-three series between Ole Miss and Oklahoma this weekend, ESPN will showcase the National Championship matchup with a handful of top-tier technologies, including Corner Cams, UmpCam, an aerial drone, and Technocrane. 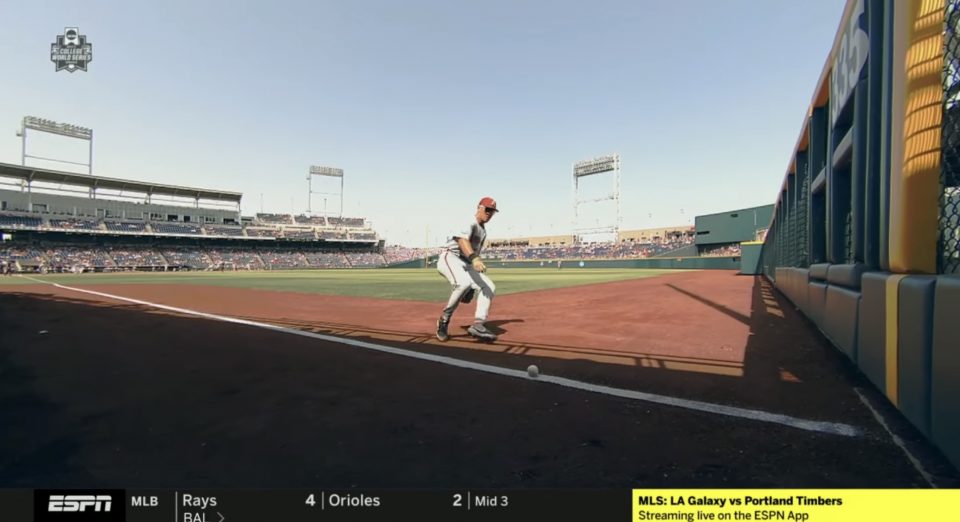 Covering the Field: Corner Cams, UmpCam, Drone Seek Out the Nooks and Crannies

Baseball fields come in all shapes and sizes, and, for any production, it’s sometimes difficult to track balls hit into the odd nooks and crannies of a ballpark. Balls hit to dead center field and the power alleys in left center-field and right center-field gaps are easier to follow, but those shot into the corners are a much harder task. 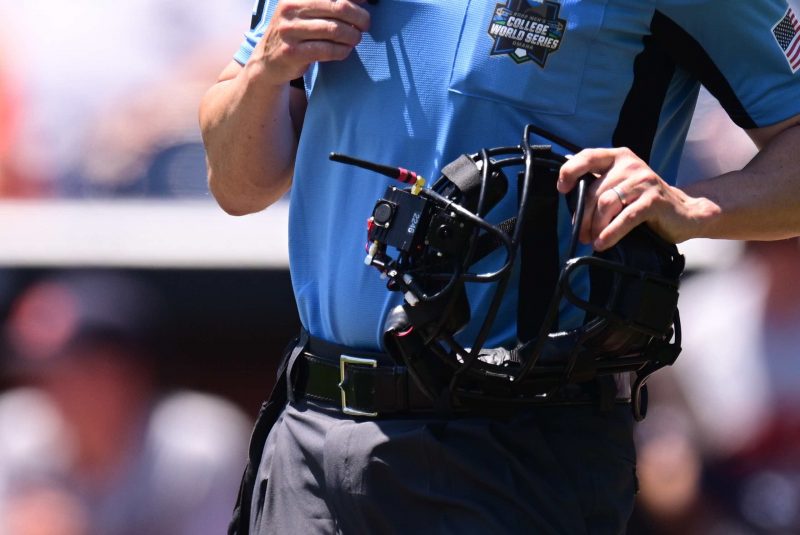 With this in mind, ESPN has deployed a pair of Corner Cams: two C360 cameras positioned at where the outfield and foul-line walls meet. These cameras can capture balls that are hit down the line and rattle up against either wall, leaping catches made at the fence, and plays that go into foul territory. A third C360 camera, similar to the two Corner Cams, has been installed at a position 8-10 ft. high on the third-base side with a direct shot of the first-base line.

“They have a really good view of the entire field,” says Phil Orlins, VP, production, ESPN. “The upside of these cameras is the ability to get the exact framing and composition that we want after a play is over.” 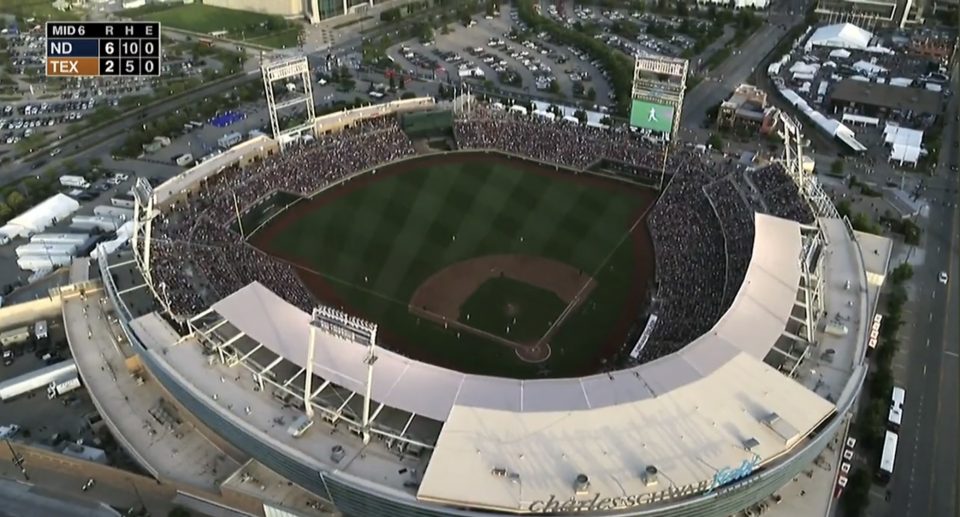 A DJI Inspire 2 drone with a DJI Zenmuse X7 camera is flying overhead in Omaha.

Mounted on the helmet of each home-plate umpire, UmpCam will take viewers behind the dish and into the shoes of the officials making the crucial calls during each nine-inning game. A staple at previous Men’s College World Series, the device comprises a DreamChip Technologies camera and RF connectivity through 3G Wireless. Although incapable of withstanding blunt force created by a foul ball from close range, the UmpCam is designed to handle inclement weather and remain in its desired position even with the umpire’s head movement. Offering unique angles for the main linear broadcast and an alternative viewing option for the ESPN app, UmpCam is built to last for the drawn-out nature of baseball.

“We have a close receive site that allows us to ride on low power and gives us more than two hours of life on a single battery,” adds Orlins. “It also eliminates the heat [emanating from the camera], which is significant with the summer weather that we have here.” 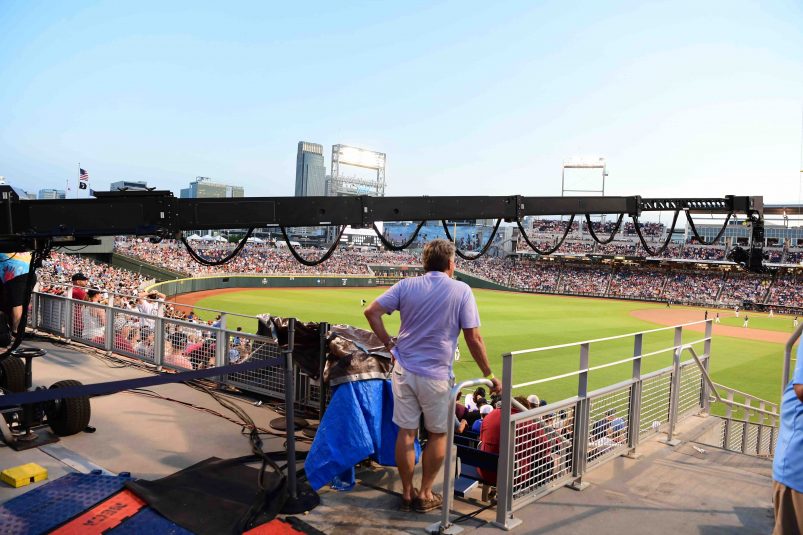 A Technocrane is positioned in the left-field concourse. (Photo: Bob Flanagan/ESPN Images)

In the air, the broadcaster will once again fly a drone during certain moments of the game. Piloted by camera operator Mike Shea, a DJI Inspire 2 drone equipped with a DJI Zenmuse X7 camera and connected to the compound via TVU will be flown from three specific locations: rooftops of surrounding hotels, in and around the parking lot of the stadium, and next to the exterior rim of the ballpark. This ESPN-owned and -operated drone will be used live coming in and out of commercials for beauty shots of downtown Omaha.

Best of the Rest: Technocrane, Onfield Mics Round Out the Onsite Tech

Corner Cams, UmpCam, and a drone may be stealing the technological headlines, but ESPN will highlight the activity at Charles Schwab Field in a big way. Stationed in the left-field concourse, a Technocrane will add another angle to each matchup. In a deployment similar to its use for the Women’s College World Series (WCWS) in Oklahoma City, the ultra-extended jib will showcase slow-moving and sweeping views of the field and the energy of each game near the left-field foul pole. 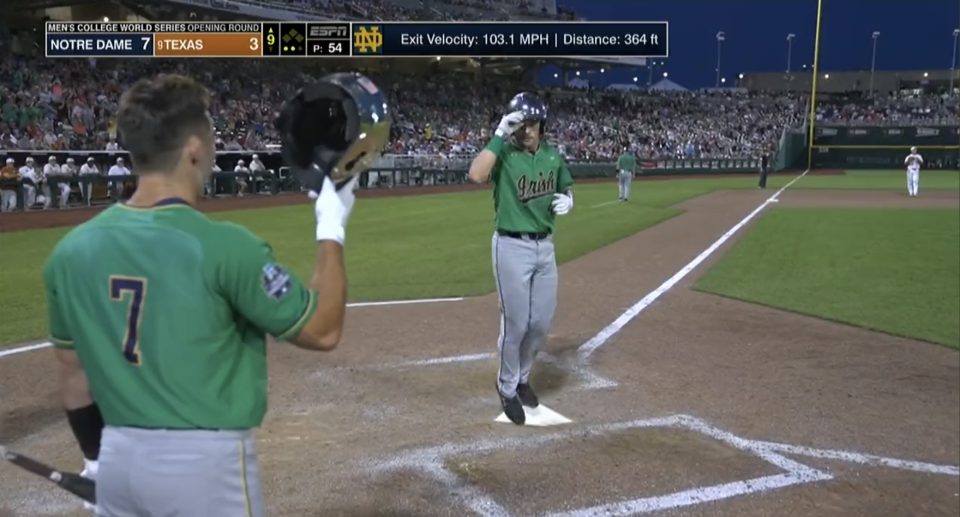 Two RF handhelds are in use, including one shallow–depth-of-field camera.

Aside from these high-profile cameras, the production team will tap other notable tech for the series. Rounding out the 20-camera show are four super-slo-mos, two RF handhelds (including one shallow–depth-of-field), three active robos, and various Marshall POVs dispersed throughout the playing field and behind-the-scenes areas.

On the audio side, ESPN’s presentation of the MCWS final will include nearly 100 microphones. The complement of 75 effects mics will be deployed on umpires, on bases, and in the dirt near critical areas, such as the pitcher’s mound and home plate.

Near the Technocrane in the left-field concourse, the SEC Network has a presence to represent its schools in the tournament. During the earlier rounds of the MCWS, SEC Now with Alyssa Lang, Peter Burns, and Todd Walker set up shop in an onsite studio. Following the elimination of No. 14 Auburn, Arkansas, and No. 5 Texas A&M, Ole Miss is the last SEC team in the competition, which means that SEC Now with Dari Nowkhah, David Dellucci, and Walker will be in Omaha for pre/postgame coverage.

“We’ll also be using [the set] for our preview show before the finals on Friday,” says Orlins.

The compound in Omaha houses a full onsite crew. For the main production, NEP Supershooter 6, Supershooter 22B, Supershooter 16, and ST6 are on hand. Because of logistics and Supershooter 6’s proximity to the main stage in Omaha, the first of the quartet made the 450-mile drive north from the WCWS to the MCWS. 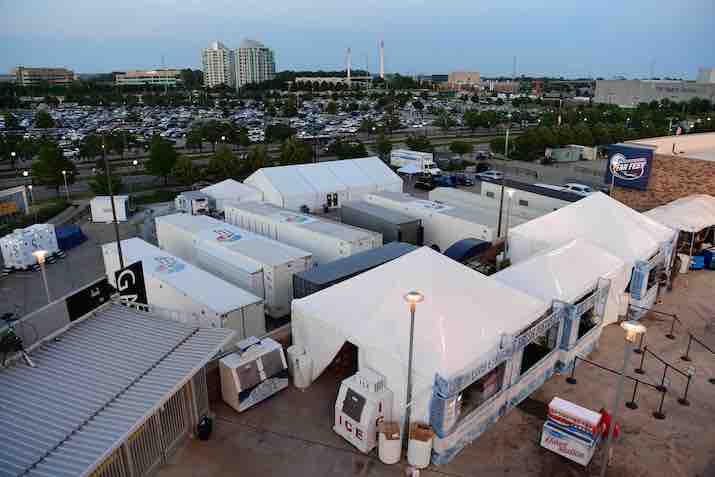 The broadcaster will rely on a handful of remote workflows as well. Three EVS replay servers will be deployed in ESPN’s Bristol, CT, headquarters. For its REMCO (remote-controlled) production model, offsite Viz graphics operators will be located in Charlotte, NC, as well as in Bristol.

Orlin is responsible for guiding the productions of not only the MCWS but also Sunday Night Baseball and the Little League World Series (LLWS). Having spent the past nine days in Omaha, he’s also preoccupied with making sure his two other projects are still on the rails. With the help of producer Andy Jacobsen on Sunday Night Baseball, producer Scott Gustafson during the college-baseball regular season, and producer Eric Mosely on the Little League World Series, Orlins is able to focus on the current productions in Nebraska. 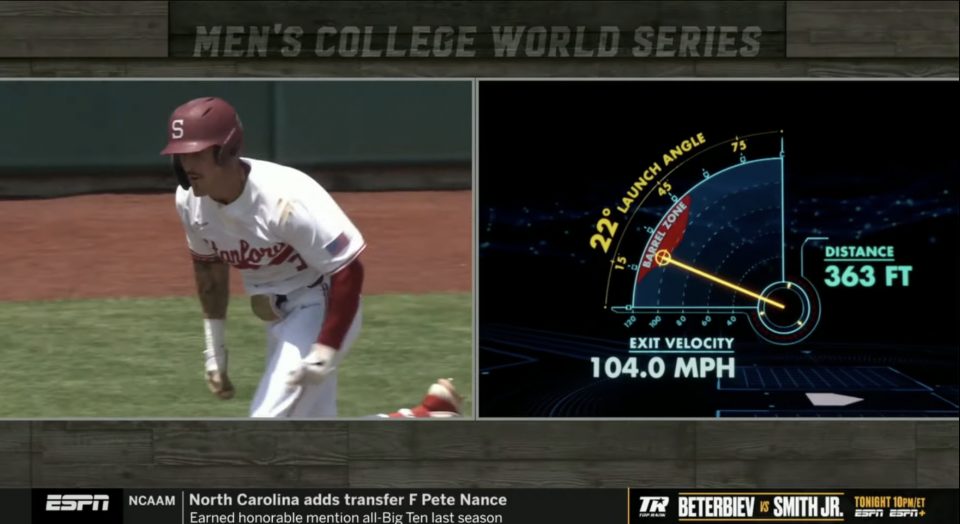 “I ask a lot of our producers to run these projects,” he acknowledges. “I try to delegate but also provide strategic guidance and technical expertise.”

As the summer moves along, the schedule will intensify. ESPN will continue its weekly Sunday Night showcase, but the broadcaster also needs to worry about the 2022 MLB Home Run Derby in Los Angeles on Monday, July 18 and the 2022 edition of the LLWS in August in Williamsport, PA. To pull off these efforts, the success of each event is achieved during the planning stages that take place months in advance. Balancing all these responsibilities while finding time to rest and recharge during these busy months is a high-wire act, but it’s necessary to producing high-quality telecasts.

“We produced every regional game this postseason,” says Orlins. “We’ll take a little bit of a breath once this event is over.”

All Roads Lead to Omaha: ESPN Accentuates Some Surprise Storylines

With all of this technology at its disposal, ESPN can adequately tell the intriguing stories of the Men’s College World Series. Beginning in March, all eight teams made their way through their respective regular-season schedules before embarking on the run to Omaha. This weekend’s final is shaping up to be a clash of two hot programs: the Sooners can become the first Division I institution to win the WCWS and MCWS in the same year, and the Rebels can go from being the 64th and final team allowed in this year’s postseason to celebrating the program’s first national title. 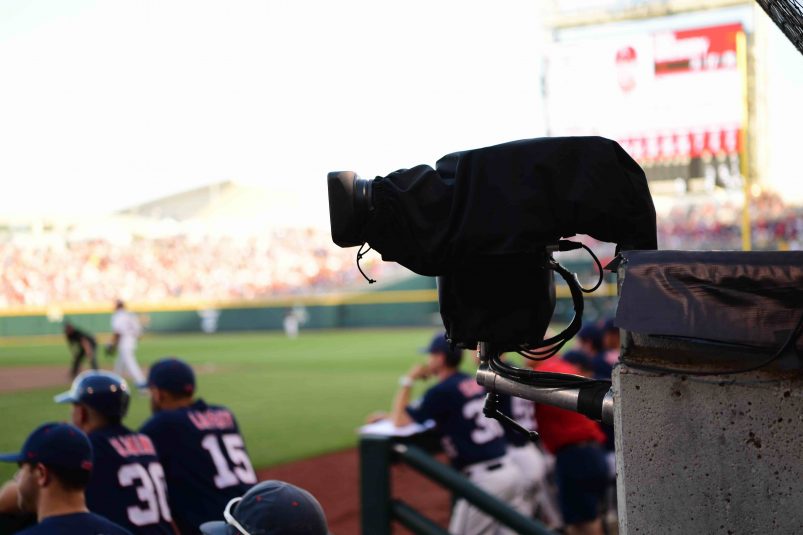 “Storylines make themselves on the field, and we’ve had a lot of diverse teams this year,” notes Orlins. “We’ve felt really good about having a ton of interest heading into the final series.”