The Stanley Cup will be in the building tonight as the Colorado Avalanche take a three games to one series lead into Game 5 of the 2022 Stanley Cup Final against the Tampa Bay Lightning tonight at Ball Arena in Denver (8 p.m. ET, ABC, ESPN+).

SVG sat down with the lead producer of the NHL on ESPN Jeff Dufine to discuss the season that was, his take on new enhancements like Skate Cam and enhanced graphics, and how this Cup Final is a special milestone in his career. 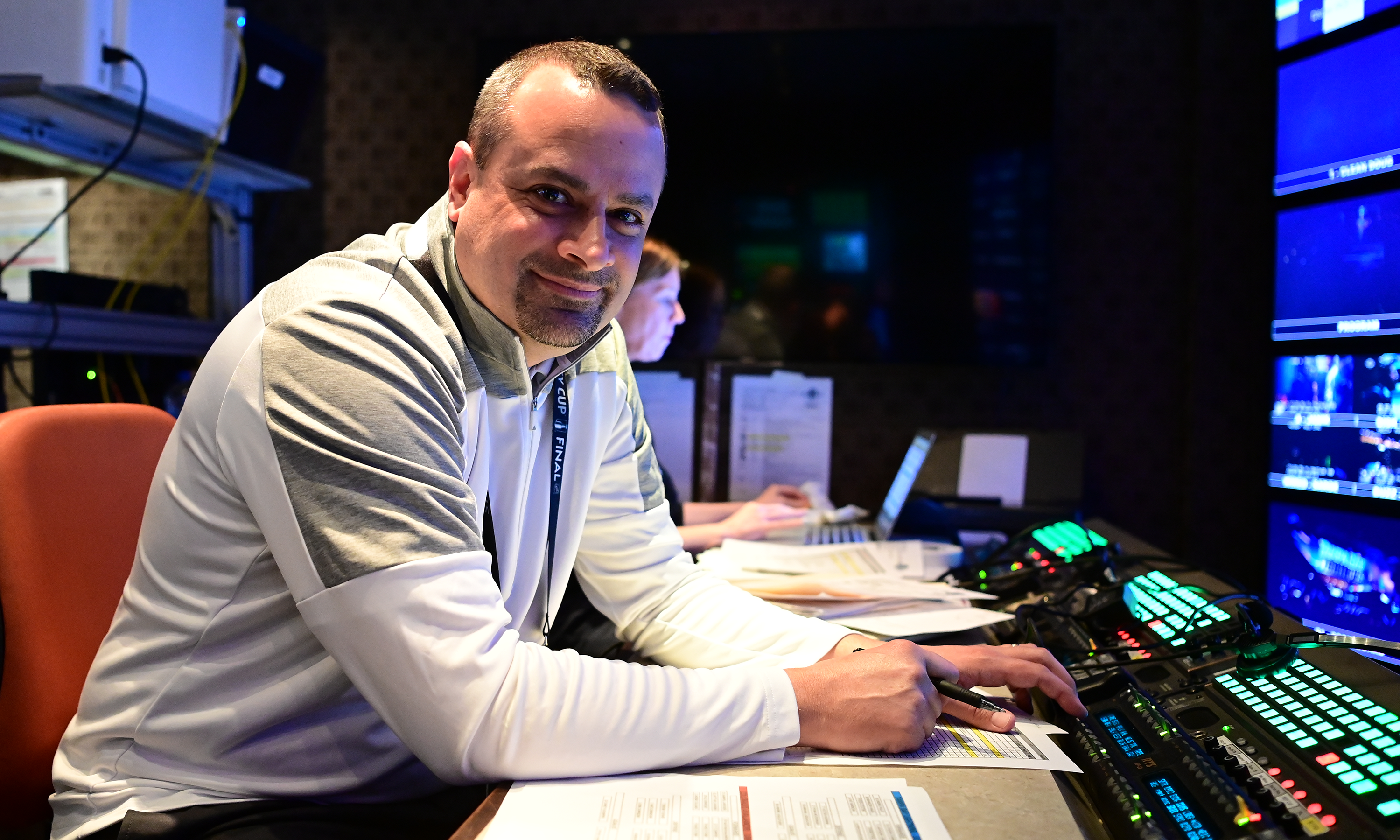 Let’s start with the historical significance of this Stanley Cup Final. We are nearing the end of the first year of this new seven -year rights deal with the NHL that has brought the Stanley Cup Playoffs and the Stanley Cup Final back to the ESPN family for the first time in nearly two decades. What’s it been like for to be such a big part of the NHL’s return to ESPN?

I remember the day [VP, Production] Mike McQuade called me [about a year ago] and said I want you to run our top crew and do the Stanley Cup [Final]. I was ecstatic about it. It was something that he and I talked about for probably a month or so prior.

A lot of people within [ESPN] are hockey fanatics. I’m sure you’ve heard that from several folks: the amount of people that approached [SVP, Production and Remote Events] Mark Gross, Mike McQuade. So many wanted to be a part of the NHL, which was pretty amazing. We were able to really collaborate with a lot of departments and put together a team that we’re really proud of.

Since Mike gave me this responsibility, it has pretty much been nonstop. It’s been an amazing adventure and we always circled Game 1 of the Stanley Cup Final as the big moment.

What goes through your mind when you think how quickly this all came together?

It’s been a pretty crazy journey. We started this thing with nothing. Well, we had one thing: we had the music.

On this Stanley Cup Final, what new tools and technology do you have at your disposal and how has your arsenal increased with each round of these Playoffs?
When we started in the First Round, that’s a unique time as we are sharing the building with the RSNs [regional sports networks] and [Canadian broadcaster] Sportsnet. My crew, specifically, did a few of the Boston-Carolina games and Pittsburgh-Rangers games. As big as those games were, there’s limited camera positions because you’re sharing the building. You work with each other and everybody worked well together and shared as much as we could, but that’s the obstacle you’re up against in the first round.

As we moved forward in the second round, we did the Carolina-Rangers series and added some additional cameras that were exclusive. We worked with the NHL around the buildings to basically extend our camera and tape plan, grant us some more access.

When we got to the [Eastern] Conference Final, we were pretty similar to what we were doing on ABC Saturdays [during the season]. We added our aerial cam, we added Skate Cam, ankle cameras, some additional Super-Mos on the cameras that we already had existing in the arena. There’s the Libero telestrator – which we used a lot on our games – especially during the regular season.

Now, at the Final, we’ve added a second Skate Cam on the ice, ankle cameras, additional Super-Mos, all that. We have studio onsite, including the tech crew, the announcers, everything. We actually have a side set, as well, with Brian Boucher and a separate producer and technical tape room dedicated to him so we can break down more stuff in our intermissions. We’ve added the blimp, we’ve added virtual graphics, and we’ve added mic’d up players working with the league and NHL Studios. We have up to four players and both coaches every game mic’ed up.

Regarding the Skate Cam, what do you think about it as a resource to go to? How do you feel that has gone over the course of the entire season and how do you feel it looks?
It has been a huge effort and I applaud the league for giving us the ability to do that. That camera operator is on skates; he’s moving around with this camera. He has a designated area where the league lets us go and he has somebody in his ear making sure he’s aware if, say, there’s a player to his left or there’s an official to his right. We don’t want him hitting anybody. We’re being cautious with it.

It does allow us to get some really unique shots. I would say we do a good job in production of utilizing those shots out of commercial breaks. The really impactful shots that [director] Doug Holmes has been been able to get are during the National Anthem, during warmup, stuff during pregame, and anything around commercial breaks. It’s pretty unique.

We feel good about it but, I would say, I still think that those cameras have a time and place. They’ve got to be used correctly to be impactful. Somebody I really respect and I worked for years a little far back said, ‘I like my shots in focus.’ I agree. You have to have that subject in the forefront and they really have to stand out. When you have a crazy moment, whether it’s fans or there’s a lot of players in and out of the shot, it just doesn’t quite look right to me and I’d like to stay away from it. If it’s used correctly, it could be impactful.

What’s your take on the state of live graphics – both yours and what the league is providing in terms of tracking and everything that comes from the AWS and SMT partnerships. What’s it been like for you adapting to how much live graphics have evolved and become such an increasing part of broadcasting the game?
I think the NHL was a sport that you wouldn’t see a lot of graphics on the screen because there’s nonstop action going on. That was a real focus of ours last summer coming into this season: how did we want to portray that? I think we really succeeded in that area as our score bug has become vital to us. While the game is going on, there’s some pertinent information that we’re able to show relatively quickly and talent on-air can reference it or not. It’s just there for the fan.

To your point though, NHL EDGE and the player and puck tracking, has been a really good collaboration. [NHL’s VP, Engineering and IT] Mark Hayden has been a great asset to helping us understand what’s available. There’s a lot out there. For me, whether you’re showing a package or a replay on how far a pass went or how fast a player is going, you’re enhancing the replay and hopefully giving the viewer at home a little bit more perspective. That, to me, is first and foremost how we want to enhance the broadcast from a graphics perspective.

I think working with AWS, there’s a lot of information out there, and I compare it very similarly to Statcast with MLB, which I have a background with. There’s a lot of data. It’s just a matter of how we want to use it. I think we’ve done a good job with that.

In a game, as the whistle happens, you’re lucky to have 15 seconds. When you put a graphic on the air and the announcers are going to reference it, it needs to be easy to digest. If I have to look at a graphic and five seconds later, I’m not quite sure what I’m reading, then I’m not going to put it on. In that way, some of the AWS-specific deep-dive information, I think, is a bit more helpful in a studio atmosphere. Maybe you show a graphic and then show a package off of it that helps enhance it and really explain to the viewer what we’re talking about. I just don’t have that time in a game. So, I think it’s a great asset to us and it’s just finding what works best in the game.

To shift to the storylines of these two teams and this series, what storylines are you at the front bench really trying to spotlight?
We’re fortunate: these, I think, are the two best teams in hockey. When it boils down to it ,Colorado’s been that team the entire regular season and we all know that Tampa’s going for three in a row. However, when you look at it, both of these coaches are super insightful. They’re a walking soundbite. You can’t go wrong. They’re both phenomenal when we meet with them and they’re really bright people and bright NHL minds.

You look at these teams and there’s Hall of Famers everywhere you look. Steven Stamkos is going to the Hall of Fame. Nathan MacKinnon will one day as well. You look at the star power, they have an amazing supporting cast. The Colorado offense is so driven by their defense: Devon Toews and Cale Makar. On the other side, Tampa plays such phenomenal defense led by Victor Hedman, a former Norris winner and still many believe to be the best defenseman in the game. They shrink that area around the goal to help Andrei Vasilevskiy be the best goalie in the world.

This interview has been edited for length and clarity. It was conducted prior to Game 2 of the 2022 Stanley Cup Final.