Nearly 50 hours of coverage relies on the world feed

NBC Sports is on hand in force for the 150th Open Championship at the Old Course in St. Andrews, Scotland. Once again, it has a large presence in a broadcast center comprising a main production gallery, audio area, EVS replay room, and graphics. Housed in the center, producer Tommy Roy and his team have some new toys at their disposal, including a 550-yard CamCat-System deployed for the F1 British Grand Prix on July 3 and, this week, along “The Loop,” one of the most notable spots on a golf course. 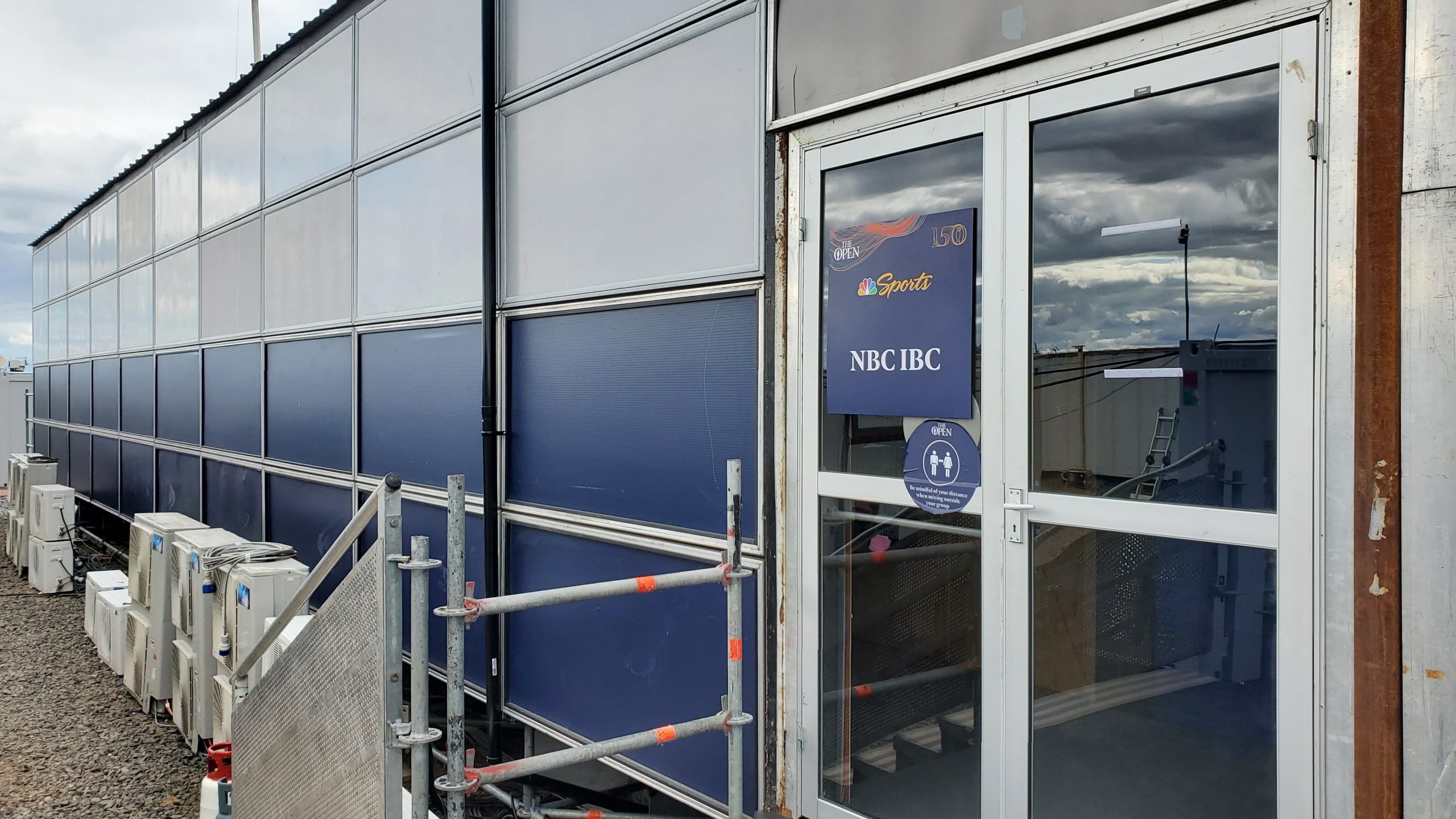 NBC’s home for The Open Championship is a large IBC-style building in the center of the compound.

“That will give the viewers a new perspective of Holes 7, 8, 9, 10, and 11,” says Roy. “Additionally, there will be a hightop tracer at the 17th tee mounted on a 30-ft. pole, and an incoming tracer out beyond the 17th fairway to show the drives flying over the shed of the Old Course Hotel.”

The production team will take advantage of the wall along the 17th hole, says Roy. “There will be a rail cam mounted just above the wall next to the road itself.”

NBC’s main announce location is also on the 17th hole (near the tee box), and pre- and post-round coverage will be handled from a set near the 17th grandstand and looking into the 18th green and first tee. Host Mike Tirico will have a third location near the practice range.

Adds Roy, “The main announce booth is situated to the right of the 17th green with views in the background of the 17th green, the 18th tee, the Swilken Bridge, the 18th green and first tees, and the R&A Clubhouse back there as well. The Mike Tirico booth is situated beyond the putting green beyond the first tee, with the first tee and the R&A Clubhouse in its background.”

For The Open coverage, unlike for the U.S. Open production, Roy and the NBC team will rely heavily on the world feed, which is produced by David Mould and directed by Jim Storey of European Tour Productions. Earlier this year, Storey and Mould got some experience at the Old Course, producing the Dunhill Links event, which is held there.

“Jim Storey, who is the director, has done that event for years,” notes Roy, “and so those guys have a plan of the best locations for the cameras to show what the golfers are trying to do, what they’re trying to attack and to take on that golf course. I think it was very helpful for them to have all that experience. Everyone is talking about experience for the players. I would say the experience for the broadcasters is just as critical as dealing with those shared greens, where [the players are] trying to figure out who is going to hit first, who is away, who is going to play first even though they’re not away? That’s very helpful to [broadcasters].”

Roy adds that working with a world feed is different because the shot-by-shot action is being decided for the NBC team.

“The good news is, those guys are very good at what they do,” he says. “David Mould is the primary producer and Storey the primary director, and they’ve done a heck of a job. Last year was the first year utilizing this format, and it was a good learning experience for us to have a pattern for the best time to go to commercial with them. We know, when there’s a big moment, what their replay pattern is, so we can help supplement that with our own replays, et cetera, et cetera. We know what they do. I think we’ll be able to make our broadcast even better.”

Today, NBC Sports began what will be nearly 50 hours of live championship coverage through Sunday (and well over 100 hours of live coverage from St. Andrews, including Featured Groups and Featured Holes). First- and second-round coverage begins before each day’s first tee shot on Peacock and will conclude after the final putt drops. In addition, Golf Channel has surrounded tournament coverage with nearly 75 hours of live pre- and post-event coverage on GOLF Central Live From The Open. Over the course of the week, more than 30 on-air commentators will provide live coverage, including Featured Groups, studio, and news across NBC, USA Network, Golf Channel, and Peacock.