Sky Sports is onsite at The Open Championship with a team of 150 that has worked closely with a team at Sky headquarters (working primarily in Galleries 4 and 34) in Osterley, UK, to deliver a wealth of content for the avid golf fan as well as the newcomer.

According to Sky Sports Golf Executive Producer Jason Wessely, Sky Sports is doing more hours than ever onsite, with such programming as The Open Zone, Live From The Open, live golf coverage, and shoulder pre- and post-round coverage.

Sky Senior Producer Dave Randall is leading the efforts of the remote team, a team that has been busy delivering content to golf fans in the UK since 9 a.m. Monday.

He says the challenge working from a gallery in Osterley was obviously to create an environment that would be familiar and very similar to what the team would have if they were onsite. The editorial goal is to take all the video and audio sources available and tailor the story for British golf fans.

“Golf’s a very interesting sport in terms of producing it,” Randall points out. “It’s a question of what you leave out, not necessarily what you put in, because it’s a nonlinear sport forced into a linear production. We tailor the coverage for our audience and try to follow our stories. Success [in remote production] is when the audience doesn’t notice the difference on screen.” 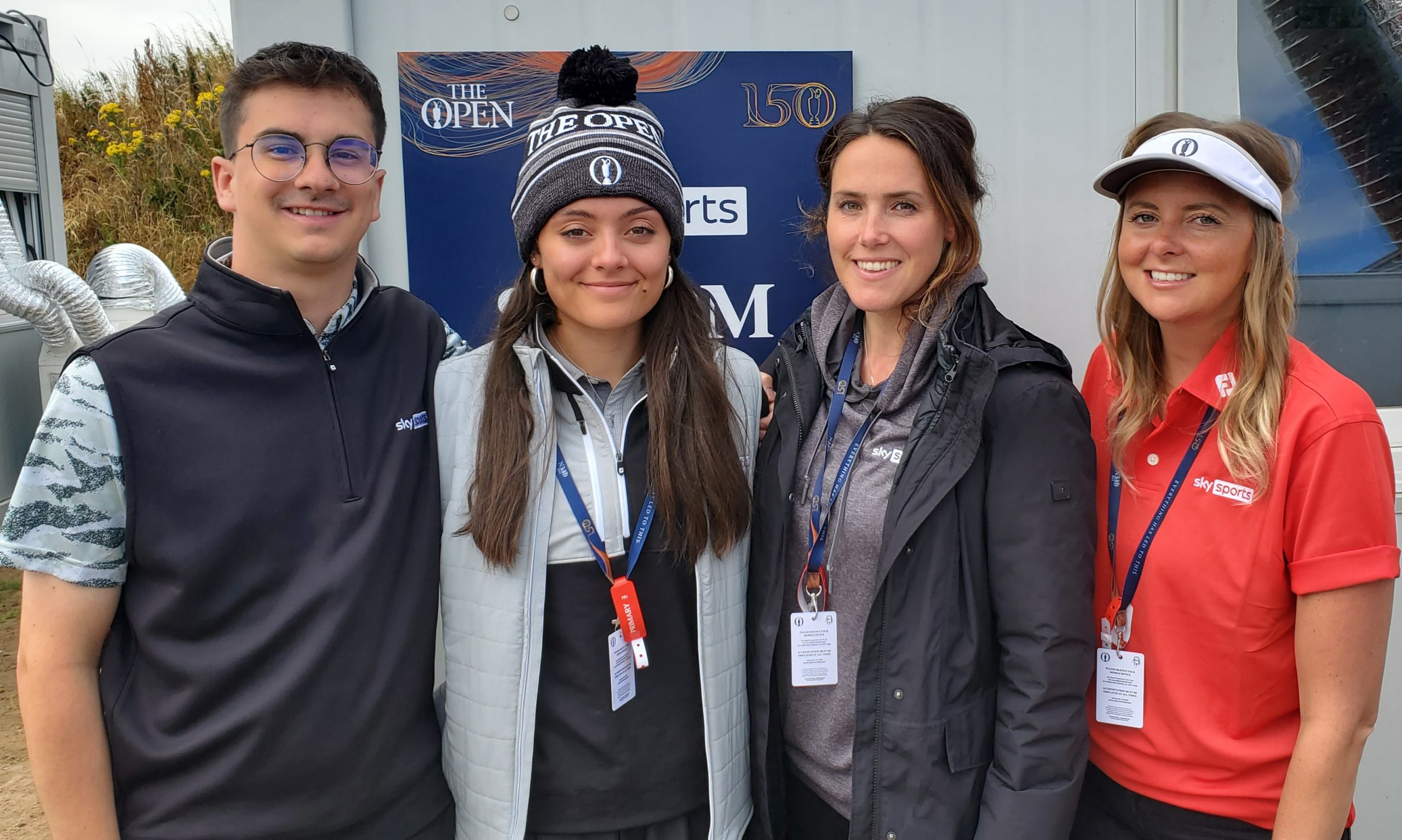 Sky Golf Production Manager Katie Harrison is at the Old Course, ensuring that the onsite team moves in step with the remote-production team.

“It’s a much larger gallery and can take in a lot more feeds than our home golf gallery,” she says. “We’re sending about 60 feeds to Randall, who decides what goes on those feeds. We also have 18 of our own cameras this week, which include different types of presentation cameras, three RF cameras, and [a super-slo-mo] camera.

“Randall and the content team then decide on what else they want to tailor the feed,” she continues. “We’ll sit down and work that out with Randall, and I try to deliver that wish list.”

One of the biggest challenges with remote production is communication with talent: organic conversations over breakfast or a drink simply do not happen. Says Randall, “WhatsApp groups are very much a part of [overcoming that challenge] as that is where organic conversations take place. You also have to force a moment, force a meeting, put things in the diary, or make phone calls. You use all of those means available to you to make that communication successful.”

One way to make the remote team feel more connected is that many of them were sent to the Old Course to get familiar with the venue and create an attachment.

“We wanted them to feel the aura and get to know the course,” says Wessely. “Most people from the production team have been up, like the producers and the APs. We have nine producers and APs at Sky and three here.”

Adds Randall, “I think some remote productions can detach people from the emotion of the event as they aren’t feeling the atmosphere like on the first tee. But we give people everything [offsite] that we’ve ever had onsite. In some instances, as technology has moved on, we’ve actually been able to make it better. We’ve given people more access to more feeds, to more host-broadcaster cameras, and they are able to record them all at once. We’ve actually made a facility that’s probably better technically than a truck onsite. It’s also a more comfortable working environment for longer hours as it’s a massive space for us.”

In Osterley, there is also a replay room with seven EVS servers, each of which can handle 10 sources at once.

” Sky Studios, our production HQ, gives us so much more ability to handle complex productions,” says Randall. “It’s not just a building; it houses huge technical infrastructure with more capacity than OB trucks. Our HQ plays a big part in this remote production along with the technical support we receive from various departments.” 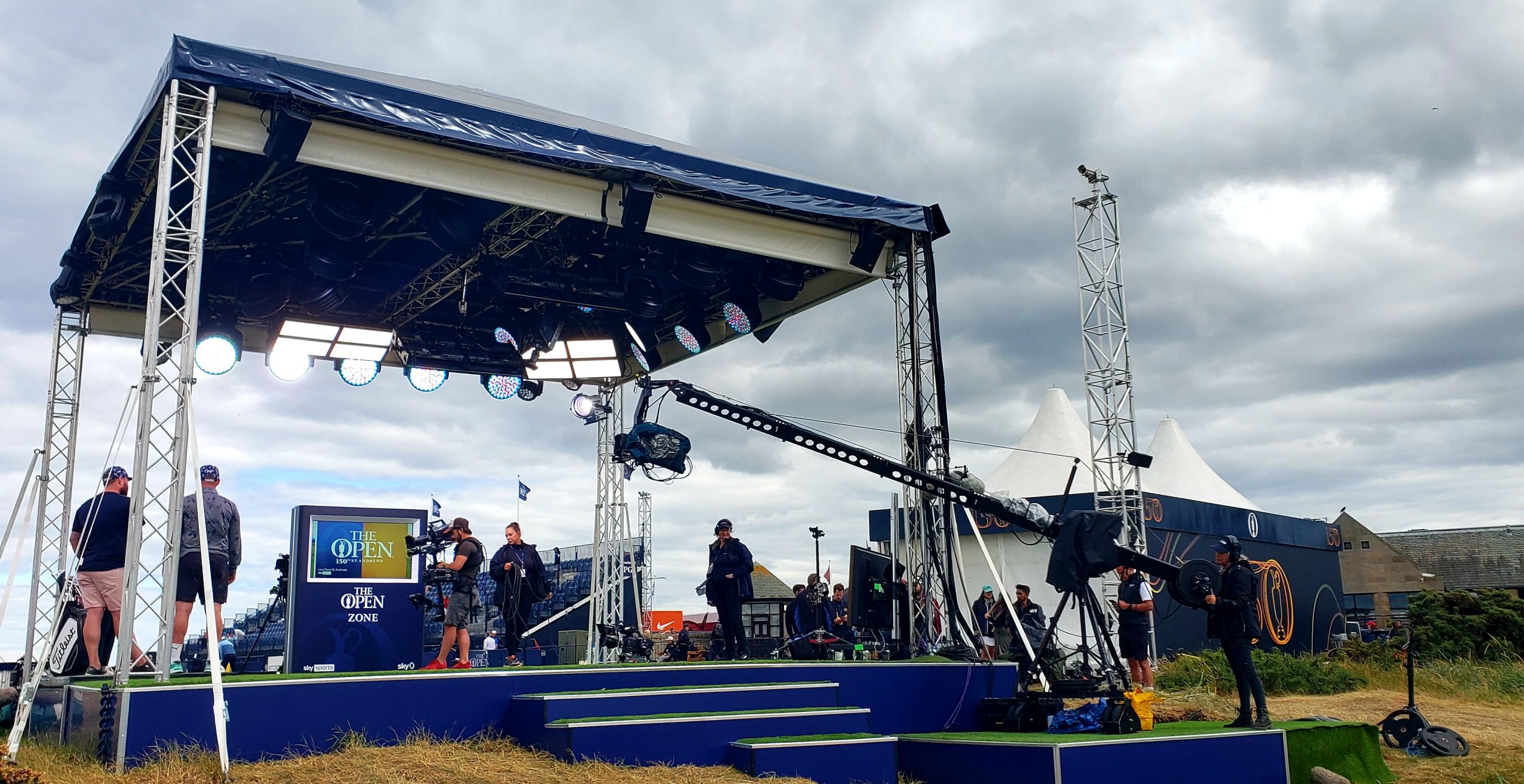 The Sky Open Zone studio at the Open Championship practice range is home to live demos, interviews, and analysis.

Sky also has two studio locations and an interview area this year, and all those signals return as part of the 60 vision paths. The two studios onsite handle for the Open Zone, which has been a staple at The Open practice range since 2016, and the Verdict show, which airs before and after live coverage concludes.

“The Verdict studio is on the Himalayas next to the first hole just by the burn and looking at the R&A Clubhouse,” says Harrison. “We also have the Sky interview with a monitor on a stand where we do post-round interviews, and we have three RF presentation cameras that Randall can have go where he wants, within the range of the RF.”

One innovation for golf coverage is the Strike Meter, a new Toptracer version that crunches shot data — launch angle, ball speed, spin rate — through an algorithm to create a score of 1-100 (60 is average). The higher the score, the better the strike.

“We are a day and a half into using it, and it is very clever,” says Randall. “It’s a next-generation Toptracer and has captured data in various golf tournaments over the course of this year. This is the first time it has been deployed. It measures not only ball speed and club speed but side spin, and that unlocks future possibilities. There are four on the golf course: at the fourth, fifth, 13th, and 14th tee boxes.”

Open Mic is also making a return, capturing the audio from a specific group in a more considered way than simply relying on effects mics or camera mics.

“It’s a directional mic that is focused on player and caddie interaction before a shot,” says Randall. “We’ll have somebody monitoring it and capturing moments around the course. Today is Padraic Harrington and his group, and the little snippets of commentary are fantastic.”

Sky Sports provided a lot of coverage from the practice rounds this week, with live reports from around the course, interviews, and more.

“I think it promotes the event first and foremost,” Wessely says of the practice-round coverage. “The Open is a weeklong event and a festival and celebration like Wimbledon or the World Cup. I want to reflect that a fan can come on a Monday morning and see players practicing, see the stands out and the merchandise opening and the town kicking off. There are people out at bars, and it is a fantastic thing. I wanted to reflect that on TV.”