Known as the town where dreamers come to achieve their wildest aspirations, Hollywood is a fitting city to host those fortunate enough to hear their name called during the 2022 MLB Draft. MLB Network (MLBN) is airing their coverage of Day 1 on Sunday, July 17 in a big way: a large stage in front of L.A. Live in Downtown Los Angeles.

“We’ve been in good hands working alongside the crew at L.A. Live, and this show has been well thought out and planned,” says Susan Stone, SVP, operations and engineering, MLB Network. “A lot has gone into making this production successful.”

Despite this being a one-day broadcast, the work that has been done on this show dates back to the early months of 2022. Prior to the start of the regular season, the network’s production staff starts to think about potential ideas. As it gets closer to the first game of the year, Coordinating Producer Marc Weiner and the rest of the department kick it into overdrive. The crew is focused on other tasks during the year, like daily programming emanating from their Secaucus, NJ studios, but as prognosticators and experts in Major League Baseball write their draft projections or make amendments to previous mock drafts, the production is always changing to cater to these new storylines. 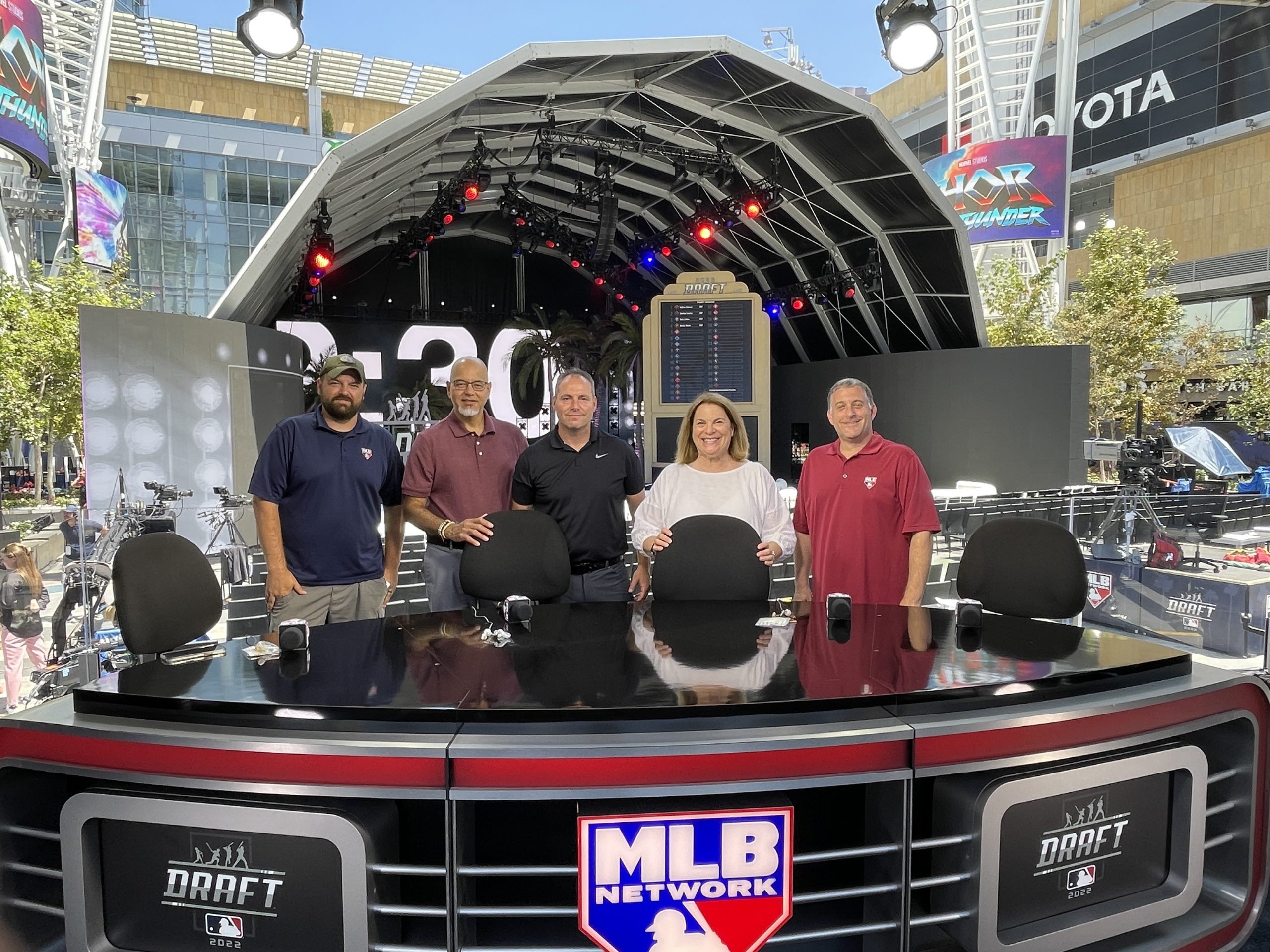 “Every time new rankings are published, I’m updating our spreadsheet and sending it around to our team,” says Weiner. “We’re ready to discuss over 500 players, so I can’t say enough about how much our research, graphics, and edit teams prepared [for this show].”

Operationally, Stone, VP, Remote Operations Tom Guidice, Production Managers Emma Roberts and David Beun, and the crew began outlining their plan in Los Angeles in March. After a total of three onsite visits, the team had a general idea of how much real estate they were receiving and how they could fit their footprint within those parameters. Tapping into the year-round sunny weather, MLB Network opted to bring this show outside of L.A. Live on Xbox Plaza. After taking the MLB Draft Combine from the U.S. Baseball National Training Complex in Cary, NC in 2021 to Petco Park in San Diego last month, the network wanted to partner with the league to elevate the significance of this year’s first-player Draft. Working closely with MLB’s VP, Events Jeremiah Yolkut to devise a stunning and covered structure, the Draft will be housed on the biggest stage to date. The roofed section features a large-scale Draft Board to help attendees keep track of first round picks in the, a runway for players to walk down and shake hands with MLB Commissioner Rob Manfred, and iconography of Los Angeles, including palms trees, hills, rocks, and a Draft billboard in the spirit of the Hollywood Sign.

“The league’s operations and events team helped us push this event to the next level,” says Marc Caiafa, SVP, production, MLB Network. “It was a collective effort between the both of us.”

Down in Downtown: Mobile Units Park Two Blocks Away at Crypto.com Arena

The A and B unit of Game Creek Video’s Gridiron will be leading the onsite responsibilities, but since Los Angeles is an extremely congested metropolitan city, the crew isn’t able to have their mobile units parked right next to the Draft stage. Utilizing the surroundings that are situated around this entertainment district, the trucks will be parked at Crypto.com Arena — a quick three-minute walk from the stage. Tasked with hosting home games of four professional franchises — the NBA’s Los Angeles Lakers and Los Angeles Clippers, the NHL’s Los Angeles Kings, and the WNBA’s Los Angeles Sparks — the venue is more than able to provide reliable connectivity. 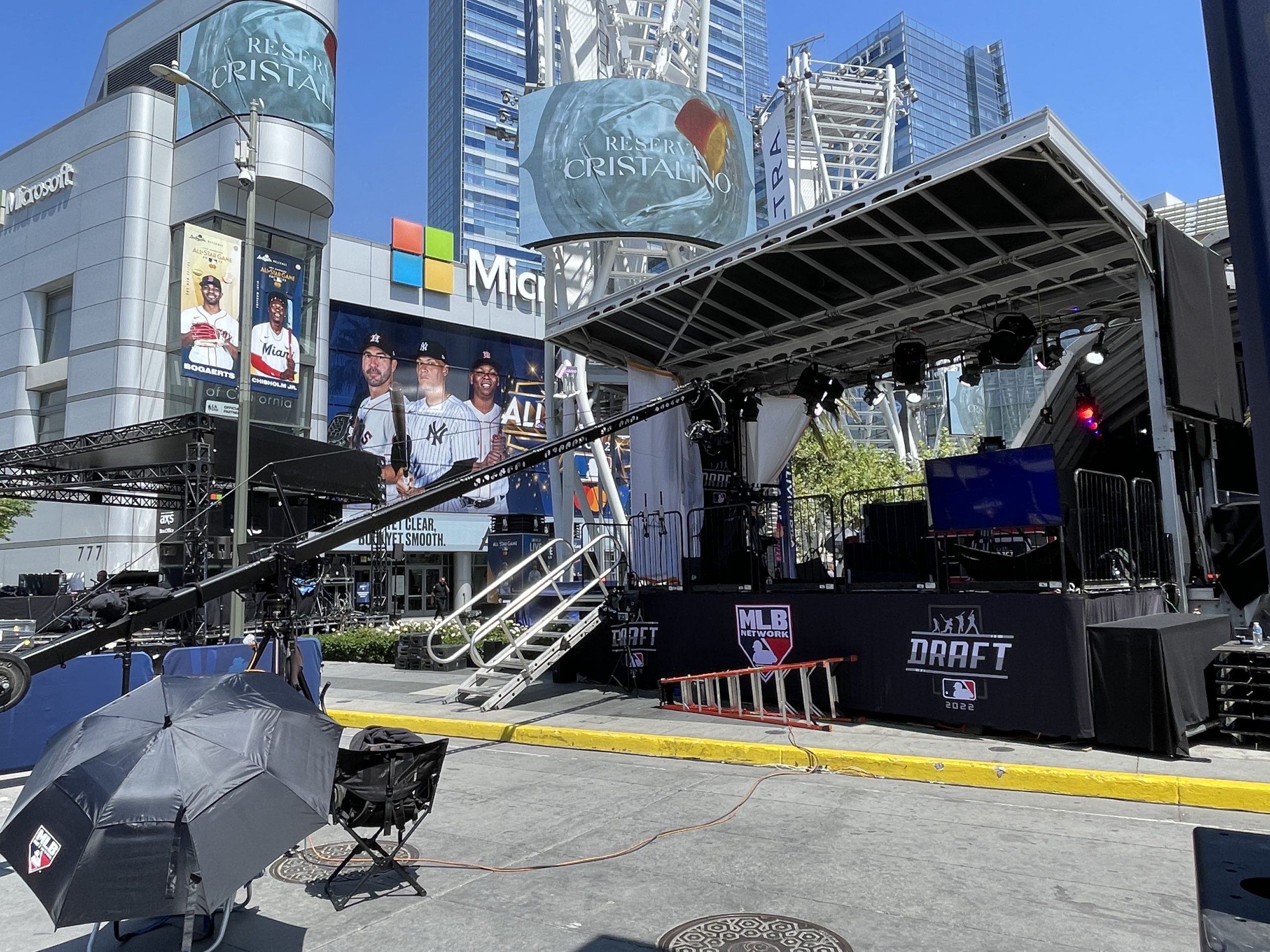 The studio set is leveraging a jib camera.

“L.A. Live has been accommodating with all of the fiber that we have running from here to the arena,” says Zaac Christopher, remote technical manager, MLB Network. “We’re able to have the trucks two blocks down the street and still have a seamless production.”

MLB Network is preparing redundancies for every need possible in the broadcast compound. Alongside the Game Creek truck, the network’s Saunders Electric UPS system will be fed by house power and will flip to a generator in case of an emergency.

Within the limits of L.A. Live, MLBN will flood the area with high-quality hardware. The broadcast will be centralized around the primary hard camera focused on the Commissioner’s podium. Additional hard cameras will cover two slash positions of the main stage area. Two jibs will cover both angles of the Draft setup: one facing toward the main studio set and another on the opposite side that’s covering the crowd, seating area for families, and the stage. Two RF handhelds, provided by CP Communications, will rove throughout the environment as well as another handheld camera dedicated to the reporter’s position near the stairs leading to the stage. Other cameras also include a robotic camera, provided by Fletcher, at the top of Crypto.com Arena to establish beauty shots of Sunday’s atmosphere. Similar to previous Drafts, MLBN will provide feeds to ESPN for their first-round Draft broadcast.

“Aside from their three cameras for their set, a handheld, and reporter position, we’re sharing a lot of resources with ESPN,” adds Stone. “That has continued to be a great partnership.” 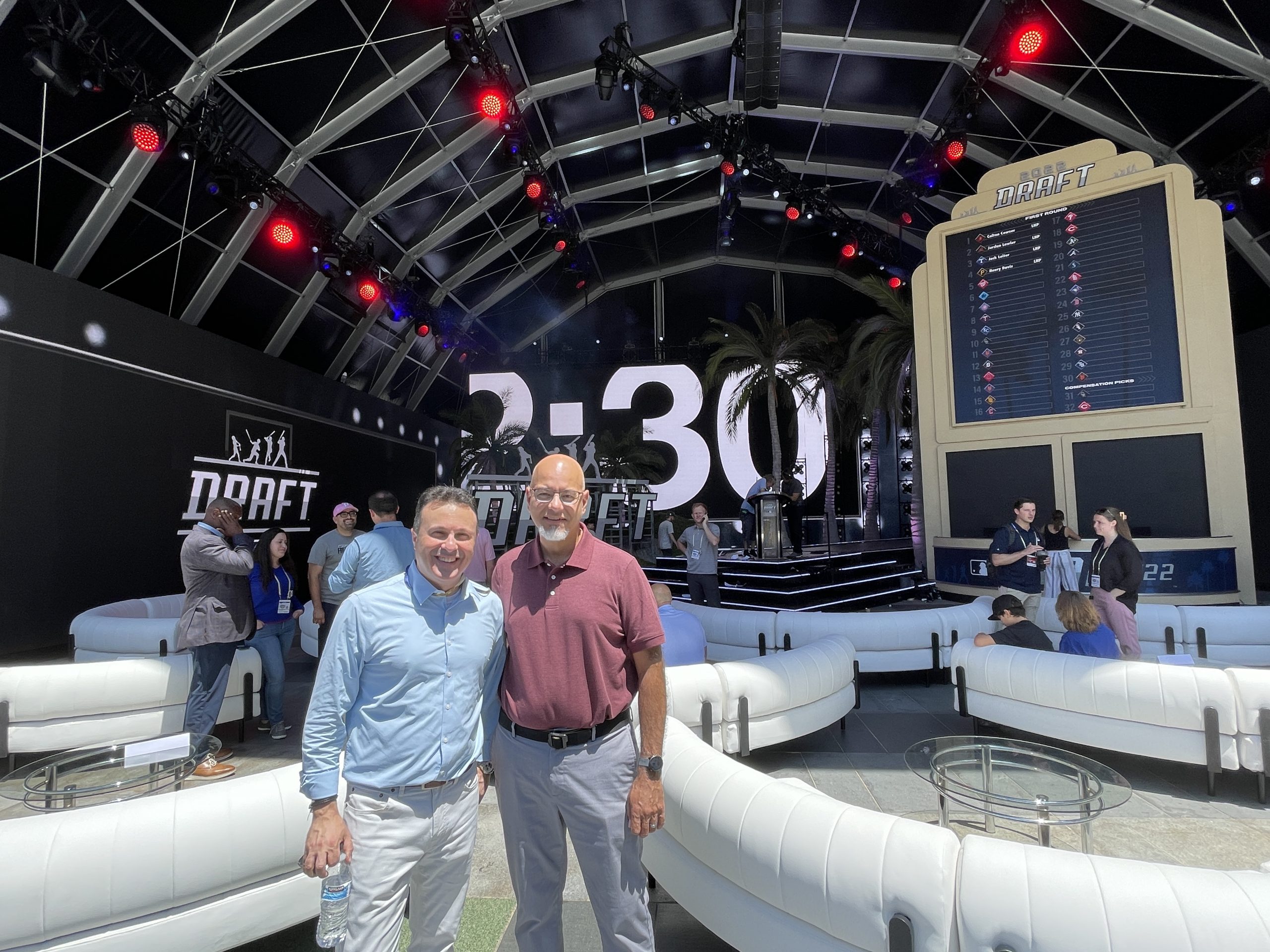 Marc Caiafa and Soto in front of the stage in Downtown Los Angeles.

To further their coverage of the event, MLB Network will have two separate studio sets in Xbox Plaza. The main desk, located closely to the setup of ESPN, was constructed by Filmwerks and will be the center of Draft analysis and predictions for Day 1. A full cast of talent will be seated at the table, including hosts Greg Amsinger and Scott Braun, analysts Dan O’Dowd and Harold Reynolds, and Tennessee Head Coach Tony Vitello, as reporter Lauren Gardner conducts player interviews. Atop a balcony from across the street, another small-scale set will be present hard-hitting information about the way the Draft picks are unfolding. MLB Pipeline’s Jim Callis and Jonathan Mayo, Baseball America’s Carlos Collazo, and UCLA Head Coach John Savage will be manning this position. Hall of Famers Trevor Hoffman and Greg Maddux, 2002 World Series-winning manager Mike Scioscia, Georgia Tech Head Coach Danny Hall, Louisville Head Coach Dan McDonnell, TCU Head Coach Kirk Saarloos have also taped player breakdowns, which MLB Network will roll into its coverage on Day One. Rounds 3-10 on Day 2 and Rounds 11-20 will be broken down from a studio set in the lobby of the JW Marriott next to the footprint of the original Draft stage.

Along with the onsite technology, fans in the crowd will add another layer to the broadcast. First experienced during the 2021 MLB Draft at Bellco Theatre within the Colorado Convention Center in Denver, fans can react in real-time to their favorite organization’s picks and bring further authenticity to the event.

“Having our fans [in person] has definitely added a new vibe,” says Weiner. “There was a natural energy in the building [in Denver last year], which is what you want in productions like these.”

Playing a critical role in the last two MLB Drafts, remote workflows will once again take center stage. In a relationship that began with the 2020 NHL Draft in Secaucus, BitFire will be leveraging a majority of the remote feeds seen during Sunday’s broadcast. These will include prospects enjoying the day with their respective families at home and 29 clubs allowing access to their Draft rooms. To coordinate this wrinkle, two control rooms will be in play back at headquarters: one will monitor the incoming feeds and another will execute the live show. The biggest hurdle to overcome is the reliability issues that come with a standard residential internet connection.

“There are so many moving parts [to this show],” says Jacob Soto, VP, engineering and IT, MLB Network. “The players that get picked want to tell everybody on social media at the same time we’re going to their at-home setup, so we sometimes lose their feed because their bandwidth goes down. The control room knows it’s a possibility, so they switch to a camera that has a generic graphic.” 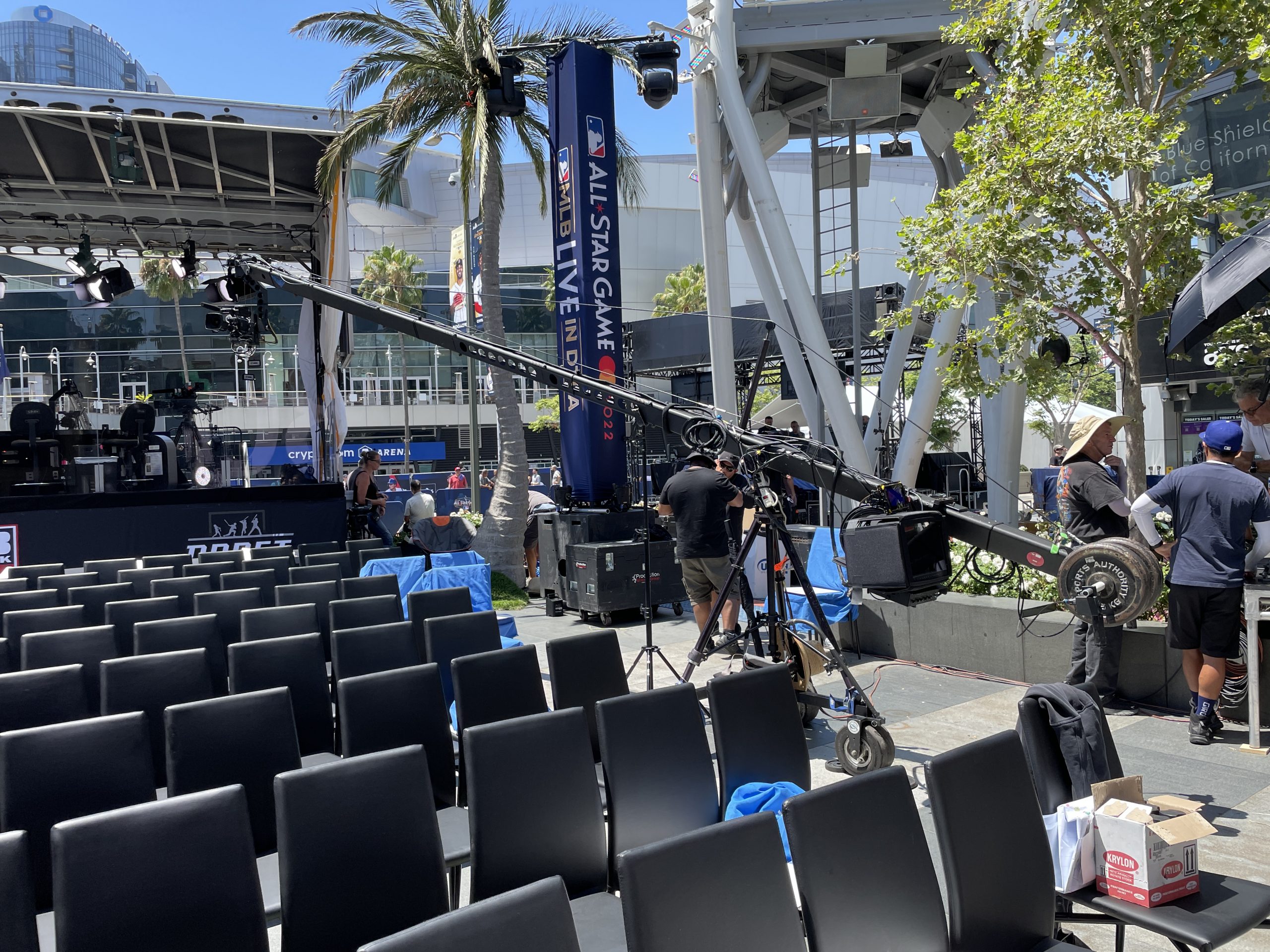 Another jib is capturing the opposite side of the studio set and the stage.

A lot of that experience has been gained from the past two incarnations of the Draft. This process is two-fold. The first aspect has to do with the players and their families. During the times of increases measure of social distancing and other safety regulations, MLBN’s production team needed to trust that these individuals would set up the equipment properly and present a shot that’s suitable to take to air.

“We had to send cameras to all these families without being able to fly a technician to their homes,” says Caiafa. “Jacob and his team were sending manuals out, but that set the stage for how we’re doing it now.”

The other side of the process has allowed the technical team to master their skills.

“We’ve had a lot of practice over the last couple of years,” continues Soto. “We have a very good team that’s developed a script to working with these families. This includes how to set up their cameras, how to get ready for their shot, letting them know when to stand by, cueing them when they’re on the air, and talking them through the whole process.”

As the proceedings shift to Days 2 and 3, Secaucus will be the main hub as the network’s efforts shift to a full remote production on Monday, July 18 and Tuesday, July 19.

From its humble beginnings during their first televised MLB Draft in Secaucus in 2009 to the heavy-lift that is presenting a second-consecutive MLB Draft during MLB All-Star, MLB Network has continued to push the envelope. Although technologies have changed over the last 13 years, each Draft has had one thing in common: the ability to attract the league’s next wave of star power to their setup. In the city based on hopes and dreams, MLB Network is banking on another year of success.

“We’ve had the likes of Mike Trout, Tim Anderson, Aaron Judge, and Carlos Correa at our televised Drafts,” concludes Caiafa. “I’m pretty proud of that fact.”