The club’s production department works closely with MLB, 29 other franchises

From Friday, July 15 until the evening of Tuesday, July 19, MLB All-Star has called Los Angeles home, but, inside venerable Dodger Stadium, the entertainment experienced by fans is supplied solely by the Los Angeles Dodgers. DodgerVision, the club’s in-venue production department, was tasked with devising a script and pushing out content to multiple LED displays for nine separate events over the five-day span.

“We’ve put in 95-100 hours of work this week,” says Tom Darin, senior director, broadcast engineering, Los Angeles Dodgers, “but it’s always exciting to do something new and different. It has been a grind, but it’s an honor to be hosting one of the biggest events on the MLB calendar.”

Two years ago, Major League Baseball and the Dodgers were preparing for the 2020 Midsummer Classic in Los Angeles: the league had begun working on production plans and graphics for the game, and Darin went to Cleveland’s Progressive Field for the 2019 MLB All-Star Game to get a better idea of what to expect. Despite the arduous process of planning the massive event, the festivities were scrapped after COVID arrived. And the 2022 show is quite different from what was originally planned.

“The overall concept is the same as what it was in 2020,” says Darin, “but the minute details have constantly changed. It continues to evolve, but we always adjust to get through what we need to get through.” 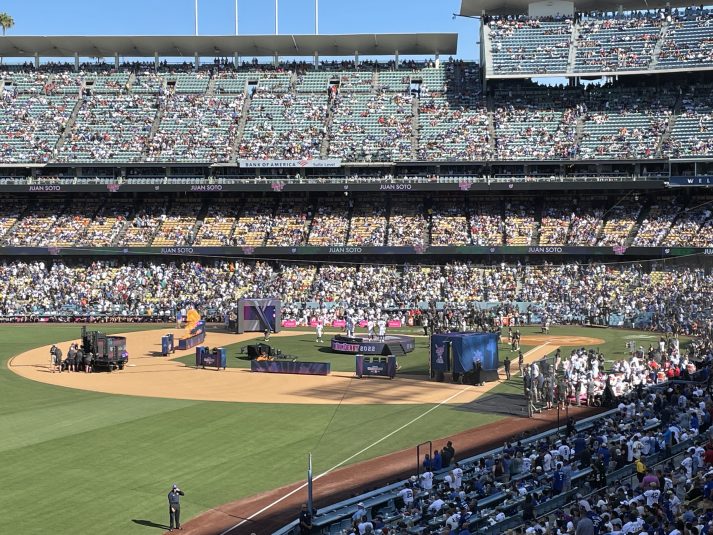 The DodgerVision crew was at the center of in-venue entertainment for the 2022 MLB Home Run Derby on Monday.

Although Darin and his team will execute Tuesday night’s showcase from their control room, the club has been supported by the league’s events and operations team. Led by MLB VP, Events and Game Presentation, Brian O’Gara and VP, Global Events, Jeremiah Yolkut, the league and the club developed the script to inject the flair of Los Angeles while also catering to fans of other teams.

“It’s an MLB show,” says Darin, “but there are [pieces of] Los Angeles and Dodger Stadium within it. We worked with their designer to come up with scoreboard looks that aren’t exactly the same as what we do here but are very similar.”

Aside from stylistic changes, DodgerVision is also altering the process from an operational perspective. During a regular-season game, the videoboard in left field is dedicated to player headshots and live video, and the videoboard in right field is reserved for more-static information. For marquee events, the feeds are flipped so that video comes from the right-field display. After years of operating in the same way, there’s a bit of an adjustment to get into this new routine. 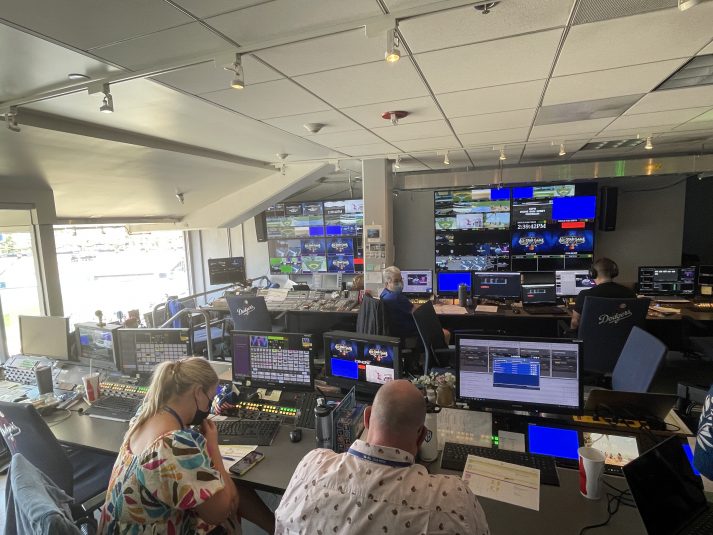 Inside the DodgerVision control room at Dodger Stadium

“It was hard to get my head around it since I’m used to seeing video in the left-field side,” adds Darin, “but [Major League Baseball and we] came to this decision because it’s what made the most sense. Events like the MLB Futures Game and All-Star Game are familiar to us because it’s what we do every home game, but the Home Run Derby has different camera positions, video feeds, and angles.”

From a production standpoint, MLB All-Star is unrelenting, with shows done one after another. It’s a treat for the fans in attendance, but it’s a logistical hurdle for Darin and company to overcome. Mixing in production duties as well as rehearsals for other events, it has been a marathon for the staff over the past five days. 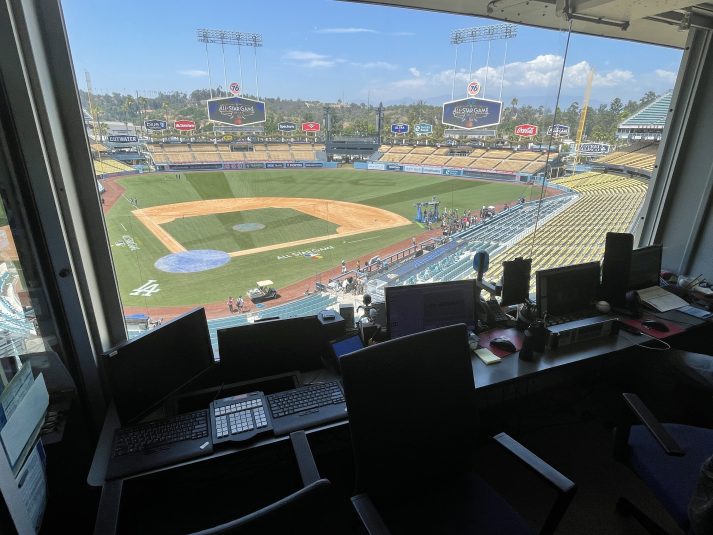 The production team has a perfect view of the playing field from the upper levels of the venue.

“It was pretty constant the entire day, without much downtime,” says Darin. “We had about a half hour between events to change sets, but we still had to do a production for the fans that stayed in the stadium.”

Working 14½ hours in one day is extremely difficult, so Darin increased his staff from a normal game day’s 32 to 56 to give individuals time to recharge and refuel. 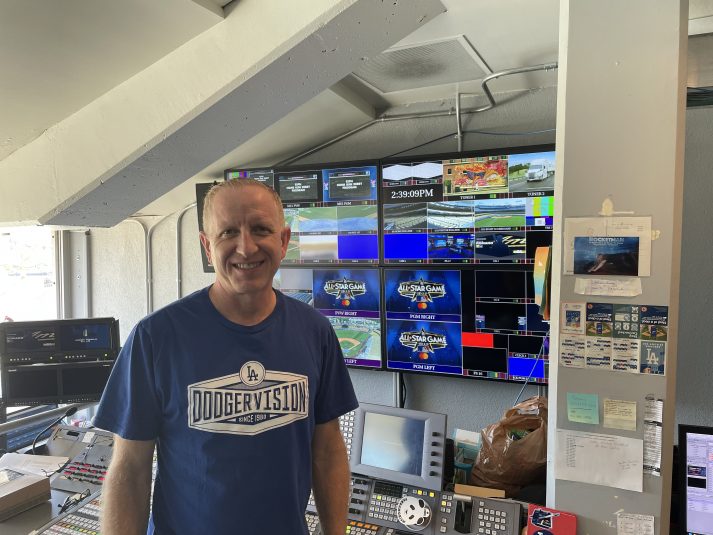 Los Angeles Dodgers’ Tom Darin will work his first MLB All-Star Game in his 25th season with the club.

After a dark day on Sunday to rehearse for the Derby, the crew was back for live entertainment of the Derby on Monday.  For tonight’s exhibition matchup, the in-venue show will leverage a total of 26 cameras, including 18 from the Dodgers (three hards, two handhelds, nine robos in the lower bowl and four in the centerfield plaza), eight camera feeds from Game Creek Video Encore mobile unit, and both the clean and dirty broadcast feed from Fox Sports. For last night’s Home Run Derby and tonight’s All-Star Game, four crew members were added, bringing the game-day number to 36. 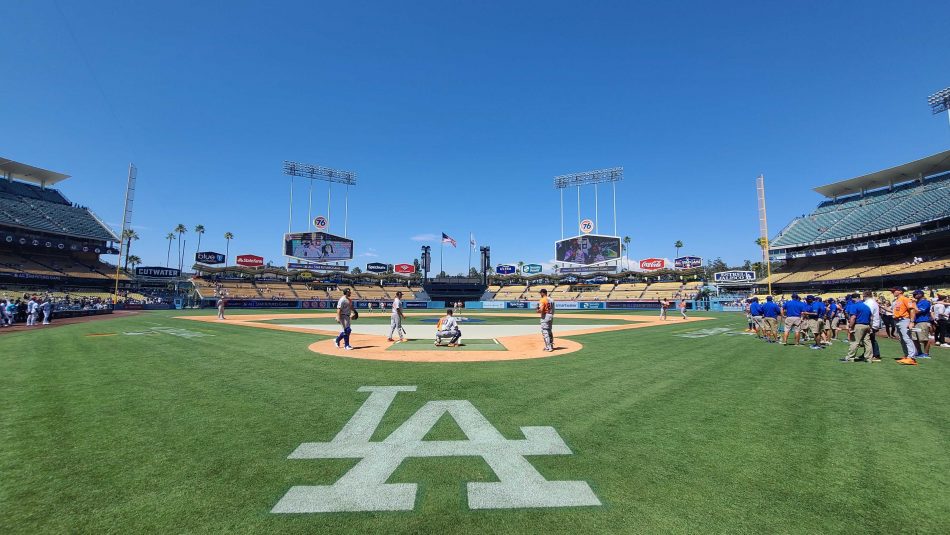 The MLB Futures Game was one of nine All-Star events produced in five days at Dodger Stadium.

After the All-Star festivities conclude, the production crew would like to kick back and reflect on the accomplishment, but, given the Dodgers schedule, the in-venue team will be back in the control room for seven straight home games. This includes a four-game series vs. the San Francisco Giants July 21-24 and a three-game series with the Washington Nationals July 25-27.

DodgerVision may be in the driver’s seat of MLB All-Star, but game-presentation departments of the other 29 franchises play a vital role in the success of the show. Darin and his crew are able to grab footage and photos of their own players, but elements of other team’s superstars aren’t as easy to access. Tapping the services of O’Gara and MLB Manager, Ballpark Experience and Game Presentation, Caylor Escalante, the DodgerVision team set up a Google Drive to bring together the necessary assets, including player headshots and walkup music. After receiving the photos, L.A. Dodgers Senior Director, Graphic Design, Ross Yoshida is tasked with ensuring that the headshots conform to MLB’s creative direction and fit the dimensions of each LED display. The original deadline for submission was July 1, but, with injuries and sudden additions to the American League and National League rosters, the crew has to remain nimble.

“Some [franchises] were proactive and gave us a bunch of headshots of guys that they thought were going to make [the roster] and ultimately didn’t,” says Darin, “which is fine because I’d rather have [extra] files than scramble to find [the necessary ones] later. MLB and its teams are still producing content, so we came up with a plan to show [the content] live through the production switcher if we receive something last minute.” 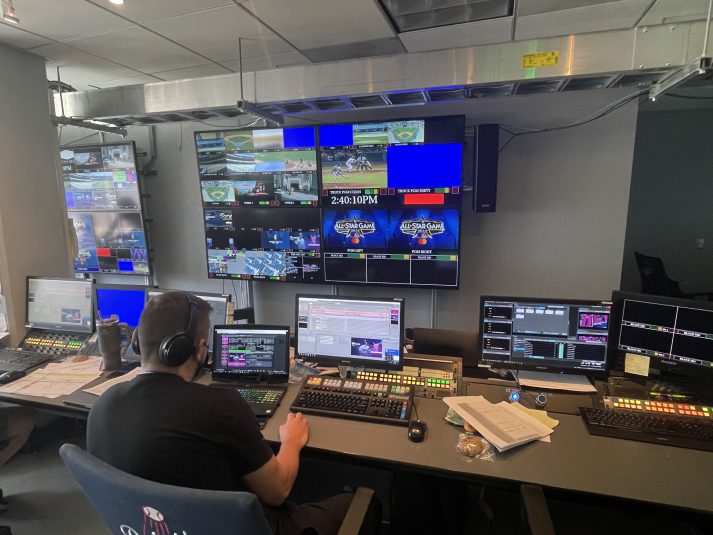 Along with ingesting all the material from the franchises, DodgerVision has tweaked the way the content will be shown on the videoboards. To make the content more dynamic, LED operator Willie Rodriguez is working closely with Ross Video to iron out a new workflow based on XPression graphics and a Tessera system. Normally operating a single system that pushes visuals to all video displays, an onsite technician loads the files as Rodriguez uses Ross Video’s Dashboard control solution to execute the show in real time.

Party in the Hills: DodgerVision Embraces Long Hours To Pull Off Impressive Run of Shows

When it comes to throwing lavish parties with a stunning backdrop, it’s hard to top Los Angeles. Darin has been one of the curators of the fun at Dodger Stadium for a quarter of a century, working with crews ranging from newbies to the industry’s most skilled veterans. In addition to Rodriguez, key members of his current team include Executive Producer, LAD Productions, Greg Taylor; Game Day Producer Jessica Rae; Technical Director Daniel Valdivia; Engineer Shane Shanahan; A1 Mixer Patrick Sweeney; and Scoreboard Operator Deanna Taylor. Despite his tenure over the past 25 seasons and his experience with assisting in numerous World Series games over the past six years, this will be his first MLB All-Star Game production.

“I’ve seen these events somewhere else,” he says, “but I’ve never been the one to produce them at my home ballpark. I look forward to what Tuesday night will bring and how the show’s going to go since I’ve never experienced this before.”