Think of it as a Summer League for the Olympics. The World Games 2022, the international multi-sport event that ended on Sunday after a 10-day run in Birmingham, AL, is a proving ground for possible tweaks to Olympics-production workflows as well as a parade for potential new Olympic sports. 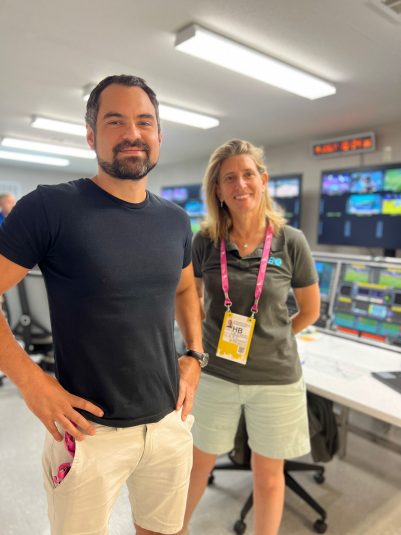 Like an Olympics, The World Games are usually held every four years (one year after a Summer Olympics), but it offers a cavalcade of largely unfamiliar sports: for example, fistball, floorball and korfball, lifesaving, orienteering, and Muay Thai. It’s worth noting, however that several sports or disciplines featured at past World Games are now part of the Olympic Games. All told, more than 30 sports were included in the TWG 2022 official program, and around 3,500 participants from nearly 100 nations took part.

Other than the somewhat exotic sports lineup, though, The World Games’ workflow would be familiar to many who work the Olympics. That’s largely because the overarching federation, the International World Games Association (IWGA), is under the aegis of the International Olympics Committee. Its International Broadcast Center (IBC) is heavily populated by Olympics-broadcast veterans: it’s led by Ursula Romero, managing director, International Sports Broadcasting (ISB), the Olympics’ longtime broadcast-technology vendor, and includes ISB Head of Engineering Jorge Pickering and Head of Production David Taunton. The World Games events are viewed through Olympics.com as well as various rightsholders like ESPN Latin America and CCTV.

“The workflow is pretty much the same, though on a smaller scale,” Romero said during the event. “We have production OB vans deployed at eight sports [venues] every day, and these mobile units get moved around from sport to sport as needed. Our aim is to cover as many semifinals and finals as possible, and, on some occasions, we’ve managed to also do all the preliminaries: for example, with gymnastics and lifesaving. But, with the eight mobile units, provided by F&F Productions, we’ve been basically driving all over Birmingham, going from venue to venue rigging and de-rigging, then packing up and going to the next venue. In an ideal world, we would’ve had more OB vans to be able to cover more and not have to move around so much. But that’s what the budget allowed for.”

(A significant difference between The World Games and the Olympics is that host cities are not required to construct dedicated venues for events. Say the World Games website, “Ideally, the event is to be staged at existing venues, in appropriately sized facilities that have been planned or built regardless of the candidate host bidding for the event.”) 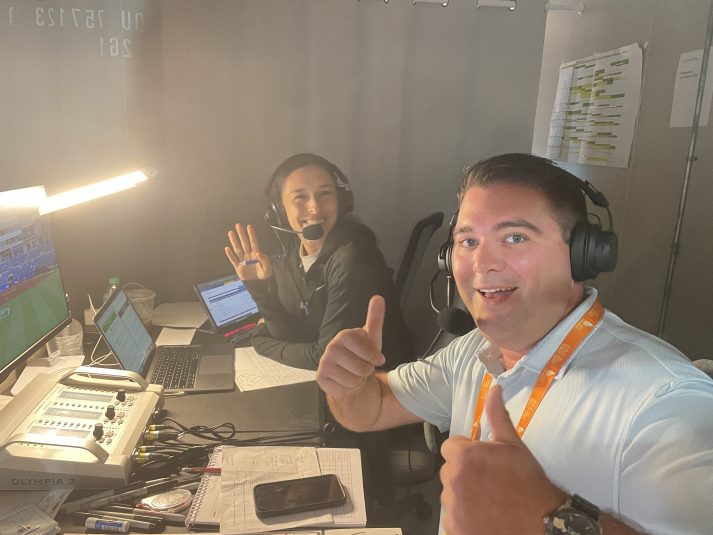 A total of 23 competition venues in and around Birmingham were used for TWG 2022. The signal was backhauled from the production vans, over either IP or fiber, to the International Broadcast Center (IBC), located at the Birmingham–Jefferson Convention Complex (BJCC), also the site of the dancesport and gymnastics competitions.

“ISB is set up at the BJCC South Hall of the IBC, where we receive all feeds from the venues,” explained Pickering, who served as project coordinator. “Here, the signal is verified and distributed internally for the production of The World Games Channel, which was offered to broadcasters around the world 24/7 with English commentary.”

ISB also established a master-control room to receive and distribute the signal internally to the logging and server facilities used for editing and integration at the dispatch station of The World Games Channels. The transmission was offered on audio Channels 1 and 2 for international sound; Channels 3 and 4 had English commentary with a mixdown of the international-feed audio.

“From there,” said Romero, “we package the World Games Channel, which is a 24/7, ready-to-air channel similar to what OBS does during the Olympics with the Olympics News Channel: a mix of live sports, delayed sports, and two daily highlight packages. That includes sport that is covered with ENG, which is edited here in the IBC as well, plus little feature-type pieces about Birmingham.”

(For Birmingham, The World Games is its second significant sports coup this year: the state’s third-most-populous city was also the site of the entire second season of the USFL, which took place at Protective Stadium. Located at the BJCC, the city’s new $180 million stadium hosted the TWG 2022 official introduction and grand-finale entertainment event.)

“The IWGA’s partnership with [ISB] put the Birmingham Organizing Committee in experienced hands to showcase the city, the competitions, and the athletes to the world,” said Hammond Reynolds, executive producer, broadcast, The World Games 2022. “The sights and sounds from these games have been spectacular. The beautiful video has showcased our beautiful city and the 34 sports. The sounds, the interviews, and ISB’s commitment to the highest quality of audio has allowed viewers to feel like they were there.”

Local broadband was provided by Unity, under the auspices of the Birmingham-based WG Organizing Committee. Broadband for streaming to rightsholders was provided by Haivision, using the Secure Reliable Transport (SRT) open-source video-transport protocol. According to Romero, the use of SRT allowed the team to avoid using satellites for content distribution to rightsholders globally. 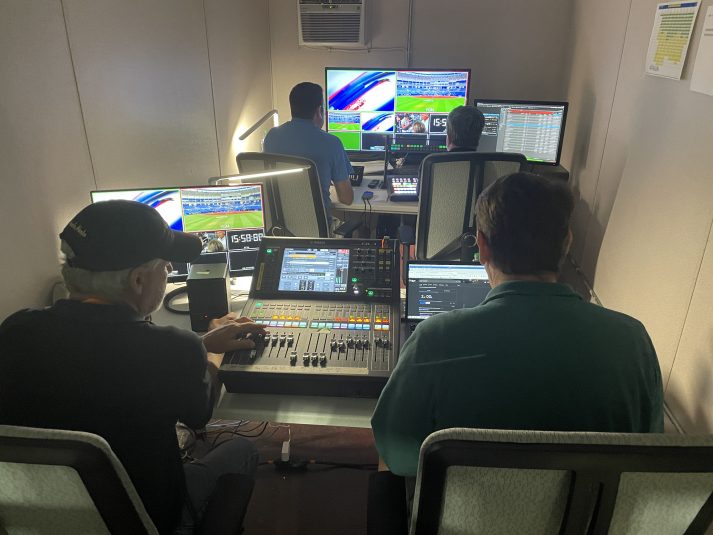 Softball was fed live from a dispatch room to CBS Sports Network.

“The good thing about that is that you can be in direct contact with the [rightsholders] and you don’t need to have a control room somewhere else to control the satellite,” she said. “You don’t have to book satellite [time]; it just goes automatically. And you can transmit 24 hours, super stable. We haven’t had any issues with any broadcasters so far.”

Added Pickering, “The feeds were carried to the IBC via dark fiber provided by the Organizing Committee, except for four venues where they provided internet connectivity with SRT. International distribution of The World Games Channel was done using IP-SRT encoding, for which ISB chose Haivision encoders with the Haivision Hub as the platform to distribute the feed of the channel, plus the eight feeds we receive from our OB vans. The distribution was done in 1080i/59.94. The video codec was H.264, with a bitrate of 18 Mbps. The audio codec AAC-LC with a bitrate of 256 kHz with a frequency of 48 kbps.”

Some REMI workflow was deployed during the Games, with cameras at the lacrosse venue operated remotely. Otherwise, said Romero, “it was a classic OB-van scenario.”

That was also the case for audio, which was done in stereo and with no athletes wired for sound. The majority of effects sound came from the camera-mounted shotgun mics and shotguns placed around the periphery of the fields of play. One variation attached PCC transducers to the sumo-wrestling mat to catch the thump of an average 325-lb. contestant hitting it. ISB used its own AEQ wireless intercom system in the IBC.

Many of the same AV platforms used for the Olympics were brought over from Spain by ISB for deployment at TWG 2022: a Spidercam for Opening Ceremony, high-speed video cameras, jibs, mini POC cameras, drones. 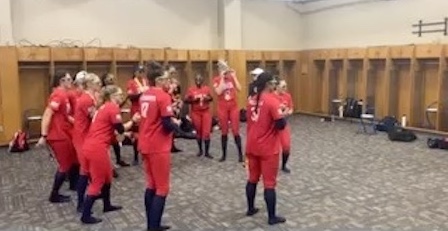 In the locker room with softball gold-medalist Team USA

Romero believes that The World Games provide viewers with a wide range of alternative sports, some of which will find their way into the mainstream at some point. But she also contends that they serve another important purpose in advancing sports-broadcast technology and techniques, which will have positive implications for the Olympics and beyond.

“In comparison to The World Games before,” she said, “we’ve tried to cover more sports live this time. That’s an improvement from last time. It has been a task, but we’ve managed. Even though there were some connectivity issues from the Organizing Committee side, we managed to pull through. The fact that we haven’t used satellite and, instead, used cloud-based systems — that’s the future. It’s proven that it works and that it’s stable.”