After an impressive first half of the 2022 MLB regular season, the New York Mets are primed for a second half that should end with a trip to the postseason. At Citi Field in Flushing, NY, this season, fans have experienced an improved in-venue environment courtesy of numerous technological enhancements made during the offseason, including new LED displays, high-speed 4K cameras, a new communications workflows based on Riedel’s Intercom system, a super-slow-motion replay system, and a revamped control room.

“The big focus for us was how we can refresh the fan experience at Citi Field,” says Oscar Fernandez, VP, technology solutions, New York Mets. “We found that using technology is a perfect way to bring these fans closer to the game, [help them] enjoy their time at the park, and bring an emphasis to our team and brand.”

Working Against the Clock: Franchise Pushes To Finish Before Opening Day

The Mets faithful are currently taking in a reimagined experience, but, last December, the project was far from the finish line when the organization began taking its initial steps toward its goal. The deadline was set for Thursday, March 31 — more than two weeks before the home opener vs. the Arizona Diamondbacks on Friday, April 15. During a normal year, this game would be penciled in on the schedule months in advance, but, with the pandemic continuing during the winter, it was uncertain when fans would be back inside Citi Field.

“[The lockdown] was certainly challenging, but we decided to take advantage of that,” Fernandez explains. “It gave us more commissioning and training time, and, from a content perspective, we added things that we hadn’t planned on being able to have for Opening Day.” 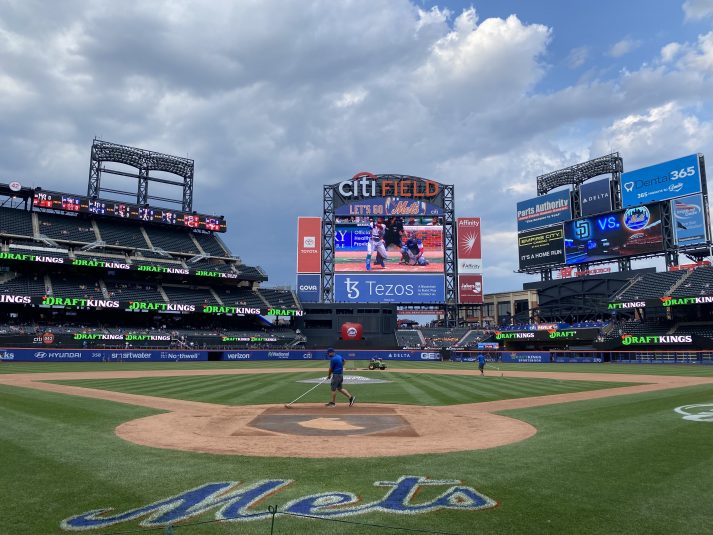 The New York Mets have made significant upgrades to Citi Field LED video displays this year. All photos: Kimia Zehtab/SNY

The extra time also allowed Fernandez to tap into his industry experience as well as to visit other facilities around the country. As VP, analytics and insights, at Legends Hospitality for three years, he was in Los Angeles when SoFi Stadium was built. Combining his knowledge with tours of the Texas Rangers’ Globe Life Field and the Dallas Cowboys’ AT&T Stadium in Arlington, TX, gave his team a good idea of what the project could look like.

“We also reached out to the league,” Fernandez says, “especially about the vinyl-plate LEDs since that was new for them and for us. [MLB] was still writing their policies and procedures about brightness, color palette, and what’s allowed or not allowed between and during innings, so we wanted to make sure we could get it done in the right way.”

From Control Room to Lower Bowl: Inside the Tech Enhancements

Transforming multiple aspects of a 13-year-old stadium is a huge task. Through a partnership with Samsung, the club recruited a handful of companies — BeckTV, WJHW, Ross Video — for their specific expertise. With a third-party team assembled, one of the biggest items on the to-do list was retooling the production-control room located in the upper level of the stadium. With the previous equipment removed, the control-room overhaul featured 4K- and IP-capable workflows that would catapult productions to the next level. Besides an entirely new data center as its infrastructure, other enhancements included 4K cameras around the lower bowl, a brand-new communications system driven by Riedel’s Intercom solution, and a super-slow-motion replay system for varied looks on the main videoboard in centerfield.

“From a replay standpoint,” adds Fernandez, “we added about twice the capability that we previously had. We’re also future-proofed for 4K content moving forward.” 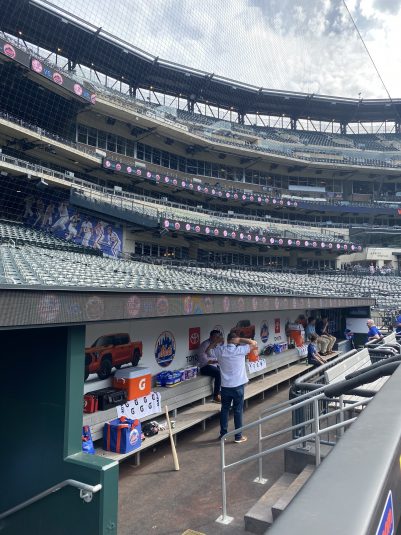 The club has added LED displays on the top of the dugout.

With a technological backbone in place, new LED video displays could be installed. Fans are greeted by one of the new displays at the top of the escalator in the Jackie Robinson Rotunda. Previously composed of static Topps baseball cards, the Mets starting lineup is now shown in a 3D video display and can be easily altered in case of a last-minute substitution. Replacing outdated technology on the venue’s ribbon boards was a main priority, including the existing displays on the fascia of the lower bowl. Ribbon boards were added to other areas of the ballpark: four in right field, on the upper section of the dugout, and behind home plate. Unlike the ribbon board at Globe Life Field, which is elevated and behind the protective netting, the displays at Citi Field are directly on the backstop wall, replacing static rotational boards. Throughout the concourse, 25 75-in. displays were installed to promote dynamic messaging. Lastly, a new IPTV system directs game feeds to 4K television screens and digital menu signage throughout the stadium.

In another heavy lift during the offseason, the crew focused on getting these physical structures installed and working in time for Opening Day. For future seasons, the plan is to eventually have the LED video displays handling HDR content.

The project was a massive achievement for a franchise with an illustrious history. It’s an accomplishment worth applauding, and patrons at Citi Field have appreciated hard work, dedication, and commitment of Fernandez and his team.

During the first week of the regular season, Fernandez had the chance to sit in the lower bowl and experience the completed upgrades from a fan’s perspective. He discovered that fans around him were in awe of the crew’s achievement: “A father and his two sons were looking out at the field and talking about all of the upgrades that we did during the offseason. We’ve continued to get those reactions from fans, and we’ve gotten a lot of great feedback from our partners, who love seeing their logos and messages displayed in this new way.” 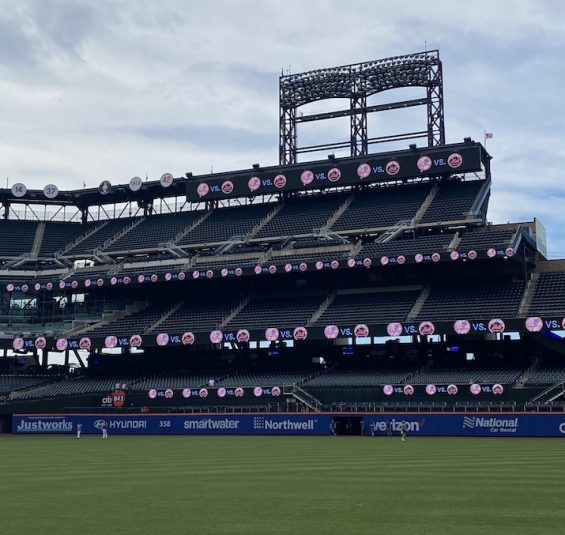 The First Step of Many: New York Mets Set Sights on Further Improvements

Nearly 36 years ago, Fernandez was a fifth grader celebrating the New York Mets’ victory in Game 7 over the Boston Red Sox in the 1986 World Series. Not many people get to return to where it all started, but Fernandez has done so after 25 years in sports-video production.

“Coming back home means a lot to me,” he says. “I’ve been part of a lot of projects, but I’ve never seen something like this come together so quickly and executed so successfully.”

Although this endeavor required long hours of negotiation, preparation, and execution, it’s only the first phase of a multi-step plan to bring Citi Field to the forefront of technological innovation and in-venue amenities. The entire organization is hoping to raise the World Series trophy for the third time in its history, but the conclusion of this season will usher in even more exciting developments at Citi Field.

“This is just the beginning,” says Fernandez. “I’m proud of what we were able to accomplish, and knowing we are able to do this [phase] makes us feel confident that we can do more leading up to Opening Day next year.”

The New York Mets have 34 home games remaining on the 2022 MLB regular-season schedule. Notable matchups include a five-game series vs. defending champion Atlanta Braves (Aug. 4-7), a three-game series vs. the Los Angeles Dodgers (Aug. 30-Sept. 1), and a three-game finale vs. the Washington Nationals (Oct. 3-5).