The DTV Audio Group held its fourth meeting focused primarily on front-line A1 audio mixers. The event, held July 21 in Detroit, was the first since 2019, when COVID changed pretty much everything, including broadcast sports and its sound.

In opening remarks, DTVAG Executive Director Roger Charlesworth pointed out that the COVID shutdown left the industry in a kind of cliffhanger, with the imminent promise of broader implementation of Dolby Atmos and of both cloud-based workflows and digital microphones. 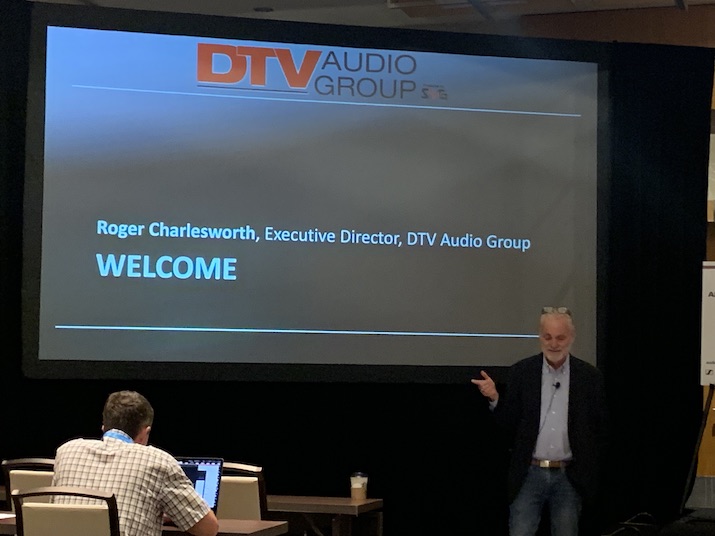 “It’s an incredible moment in audio,” he told a highly focused audience of 70-plus attendees, mostly veteran A1s or audio supervisors, managers, or executives from broadcast sports. “[The cloud] is further virtualizing remote production, and streaming has made distribution more fungible and adaptable.” Expect, he added, “radical change going forward.”

In fact, Charlesworth noted in a subsequent interview, Atmos was part of what prompted the DTV conclaves in the first place, when he and key audio/technology executives at television networks sought more-direct communication with the A1 community, which in the U.S. comprises freelancers almost exclusively, just as Dolby was preparing to introduce Atmos to the broadcast sector.

“It would be a great way to get everyone together and be able to talk through things, as much about production management as mixing,” he said.

In 2017, the first of A1-focus meeting was produced under the aegis of SVG.

“At the first one, we had three of the four Super Bowl mixers attending. This year, we also have more distribution-focused attendees,” Charlesworth said, noting the presence of representatives from Comcast/Peacock, Netflix, and HBO Max/Warner Media.

“SVG’s DTVAG meetings are fantastic opportunities for the sharing of ideas between A1s as well as with manufacturers and vendors,” said NBC Sports and Olympics Senior Director, Audio Engineering, Karl Malone. “It is rare that A1s get to discuss the practice of mixing sports with other A1s, and the DTVAG seminar is a wonderful opportunity for learning and sharing.”

Accordingly, Dolby Labs commenced the conference with a look at how deeply Atmos has become integrated into broadcast sports, citing its applications for the Olympics (including 180 hours of immersive sound from Beijing in 2021), the World Cup, its testing for NBC Sports’ coverage of Notre Dame football home games, and its use on an estimated 120 events a year on Fox Sports. Broadcast sports is now at home with Atmos, said Cherylene McKinney, director, commercial partnerships, Dolby. 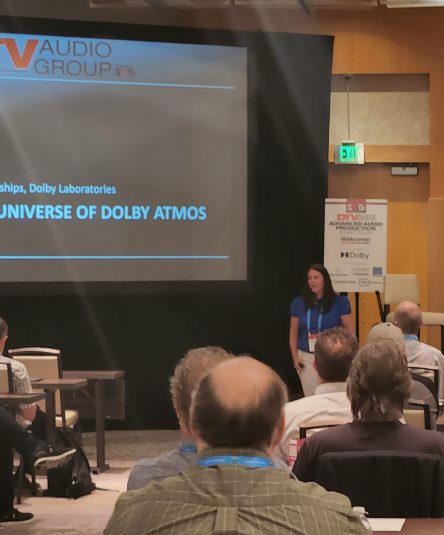 In a presentation on Atmos, Dolby’s Cherylene McKinney noted that broadcast sports is at home with the format and that “now it’s all about educating the consumer about how and where to get it.”

“Now it’s all about educating the consumer about how and where to get [Atmos],” she added, noting that major consumer-electronics brands have incorporated Atmos into such products as soundbars.

One of those is Sky TV’s Sky Glass, the UK-based (and Comcast-owned) network’s first foray into consumer television sets. A demo of the television — which integrates 4K, UHD, HDR, Atmos, and other platforms, as well as upward-firing speakers for Atmos’s overhead channels — was available in an adjacent room throughout the conference.

Speaking of how Atmos is changing broadcast-sports production, Malone explained how Atmos mixes had created “a dome overhead” of golf production, in the form of the format’s four channels of overhead speakers. He further noted how music production using immersive sound enhances the format’s market penetration on television with sports increasingly incorporating music.

(Malone also emphasized a semantic distinction in terminology. “We are mixing in ‘immersive’ when we are in the truck and control rooms,” he said. “The Atmos encode/decode is heard only in the homes, and the result is not as ‘immersive’ as what is being produced upstream, due to encode/decode limitations in Dolby DD+JOC. There is a push by A1s to ensure that Dolby continues with ensuring that the pass-through quality from truck to home is equal. We are not there yet and thus try to temper our use of the term Atmos until it reached the home.”)

Malone also highlighted the use of Audio-Technica’s new 8.0 immersive microphone to add efficiency to productions, calling it “instant immersive audio” and adding that the height-channel speakers have added a new dimension to mixing the crowd sounds for sports on television.

Microphones were on the agenda in other ways. Two presentations looked at how transducers have moved to Dante and other networks, with such benefits as deployment scalability and remote controllability. Future benefits could include beam-forming applications for precision targeting of sources, integrated DSP, and even GPS capability.

(In a presentation on the potential for AI-assisted immersive mixing, using pattern recognition to predict how a mix unfolds during sports, Salsa Sound CEO Rob Oldfield observed about microphones in the digital era that “we need to start viewing microphones as sensors, not just sound collectors.”)

Interestingly, although much of the focus of immersive sound has been from the object-based rather than the channel-based perspective, some voices on the distribution side suggested that staying with a channel-based approach would make Atmos implementation even easier and more efficient, from the network point of view. That, the presenters suggested, would also be a better fit for the at-home types of remote production that the pandemic accelerated.

Training was a theme that surfaced in several presentations. Glenn Stilwell, sound supervisor for MLB’s Friday Night Baseball production (which is also streamed on Apple+), said that facilities for advanced Atmos training at Dolby offices in San Francisco now include a simulated remote-production truck. Online basic courses are also available, without cost.

A panel on immersive audio came to a few conclusions, including that 5.1.4 mixing is rapidly approaching cost parity with standard 5.1 surround and that 5.1.4 upmixes are still a work in progress.

The DTV Audio Group events have developed their own personality, an amalgam of their individual — and highly individualistic, as audio people can be — participants as onlookers, panelists, or voices shouting out questions or observations from the audience. The events have become opportunities to vent, to imagine, to collaborate, to opine.

It’s hard to find one quote that encapsulates the discussions, but the closest last week might have been from Tom Sahara, who led Turner Sports’ technical operations for more than three decades and served as chairman of SVG’s Advisory Board and the DTV Audio Group.

“We’ve gone to the cloud, and we’re never coming back,” he told the audience during a panel titled “Evolving Virtualized Production Models.” “So we can always have our best people on every show, day after day.”

Live From MLB at Field of Dreams: The Game May Look Old, But It Sounds NewCrossFit Games 2022: Networked Sound Is Everywhere It’s Needed