Flowics today announced that Flowics Middleware will support Flowics Data Connectors, which act as a real-time bridge that integrates cloud-based data sources with on-premises equipment and vice versa. As a result, broadcasters that subscribe to Flowics Middleware and any of the available Flowics Data Connectors will be able to integrate live data from any of the 20-plus already natively integrated data providers into any third-party graphics engine they choose. Flowics customers will now have many more options when using the connectors to create data-driven broadcast graphics.

Flowics Data Connectors are native integrations of external third-party data providers originally built into the Flowics Graphics platform. They make it possible to integrate live external data — such as live sports statistics; gaming statistics; or betting, weather, finance, and cryptocurrency data — into broadcast graphics without the time and expense of custom development or manual data entry. Before this update, Data Connectors were only available as add-ons for the Flowics Graphics cloud-based graphics engine. Now, they will also be available for customers of Flowics Middleware for production workflows using on-premises character generators. 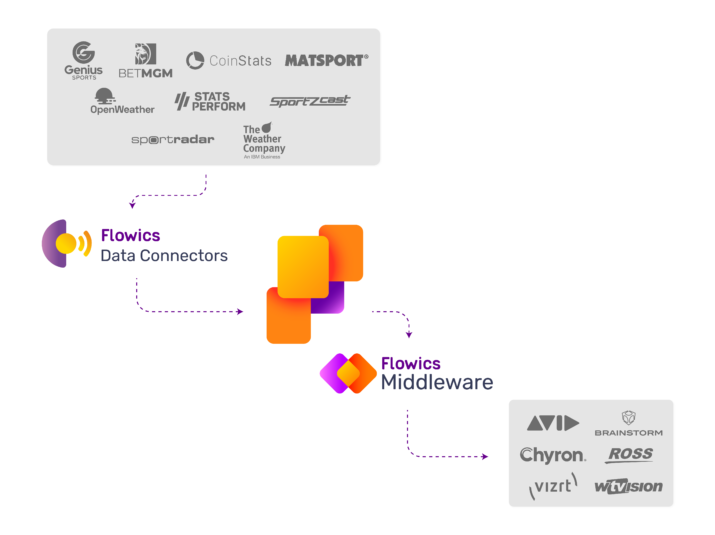 This update will answer the demand from Flowics customers that want the option to use their traditional graphics systems for certain production workflows, such as 3D graphics or augmented reality. Through this plug-and-play solution, certain Flowics Data Connectors will be available for integration with on-premises graphics engines from third-party vendors such as Chyron, Ross, and Vizrt. Broadcasters will no longer be forced to use the connectors with only Flowics Graphics. They will have the flexibility to choose the graphics engine that best fits their production workflows or to reuse existing graphics scenes without having to import them to Flowics Graphics.

It will be especially useful for news, sports, and esports broadcasters, who regularly pull in live third-party data to populate their on-air graphics.

“With this new offering, Flowics is bringing even more options to broadcasters for simplifying live data integration into on-air graphics, said Flowics CEO and founder Gabriel Baños. “We have a growing catalog of native integrations in the Flowics platform with many different data providers. The connectors reduce time and effort for broadcast engineering and graphics teams, while the new support for Flowics Middleware will bring more flexibility to production workflows. So it’s a mix of more flexibility with time and cost savings.”