Situated in southern Poland is Cavatina Hall – a multifunctional building that celebrates the  musical experience. The venue itself is owned by leading Polish development company Cavatina and is the first privately owned and funded concert hall in Poland. Officially opening its doors in March of this year, the six-story building counts over 9,000 square meters of top-tier office space, a cutting-edge recording studio, a chamber music room and finally, a majestic 1,000 capacity concert hall. Boasting a state-of-the-art stage with a comprehensive installation including an L-ISA immersive sound system and extensive digital intercoms by RTS, the performance hall is considered the crown jewel of Cavatina and a milestone in concert sound in the country and region.

Coordinated, co-designed and installed by local RTS partner Audio Plus, the branches of stage technology include immersive sound, cinema technology, audio signal network and intercoms to name a few. Relying on a digital intercom solution from RTS, the stage managers have full communication in the whole venue with various KP-Series keypanels and ROAMEO DECT-based wireless intercom systems with an ODIN digital matrix at the center. 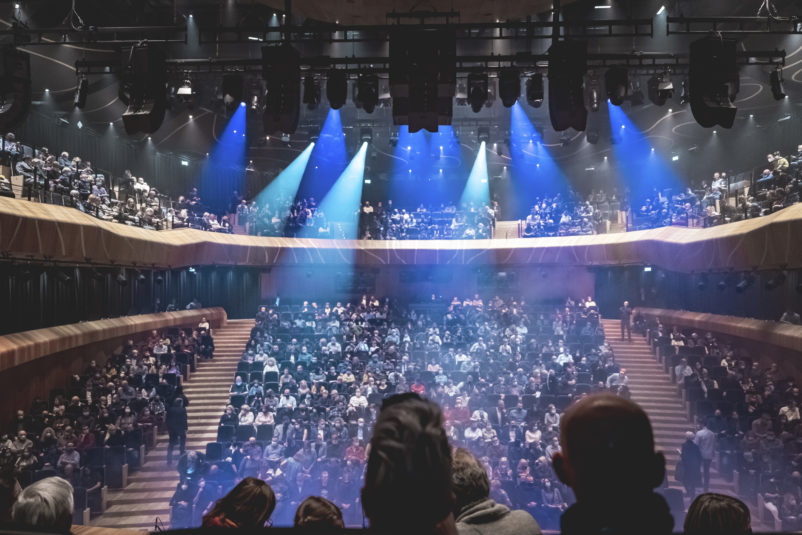 “RTS’s broad intercom portfolio allowed us to choose the models to suit all needs of the users in different locations for Cavatina Hall,” says Tomasz Ibrom, Project and Installation Engineer, Audio Plus, who was responsible for system integration at Cavatina Hall. “Cavatina Hall is a big building made out of concrete, steel and glass, with lots of separate halls and rooms with thick concrete walls between them. Despite this there is wireless intercom communication provided in almost every place of the building. We selected every place where users might need to communicate with co-workers in other rooms and provided wireless transmission there – it works fantastically.”

Being a coherent, innovative building with a very effective audio signal network, all the systems in Cavatina Hall had to be adaptable enough to work within the concert space. “The client had a very uncompromising approach to all the systems working in Cavatina Hall, not only the acoustics elements or PA, but also all the supporting systems like intercom, scene action preview system, digital signage system, public address system,” adds Stanisław Mielczarek, Tech Support Engineer, Audio Plus. “The most important aspect was flexibility and that is exactly why the ODIN matrix was chosen. Its ability to connect with different systems in various audio formats was perfect for this type of project. The KP-Series key panels were chosen to exactly match the needs of the user in certain locations. The breadth of the RTS portfolio allowed us to make the right choice in every situation.”

Taking three years to construct and fully equip, the venue now boasts the largest ROAMEO wireless intercom system in Poland with its AP-1800 access points and TR-1800 beltpacks being put into practice across the multifunctional space. “It did take lot of resources, work and time,” adds Ibrom. “But in the end, it was worth it, because we could propose absolutely uncompromising solutions and it is now a reference for us – which will be valid for years to come.”

Cavatina Hall now boasts a versatile and flexible signal distribution system – virtually transforming any type of signal into any other type of signal, regardless of analog or digital. “Cavatina Hall is a concert hall first of all, but also a whole complex, with the chamber music hall and the recording studio being a valuable complement to the concert hall,” concludes Katarzyna Pytlarczyk, CEO, Fiducia Foundation, administrator of Cavatina Hall. “It is quite an honor to be able to participate in this project. I feel pride and a surge of energy. I feel that something unique is happening before our eyes.”