The X Games established the model for sprawling extreme-sports events. The Mercedes-Benz UCI Mountain Bike World Cup event has been among those refining that model for the past decade or so. Most recently, the event played out July 29-31 at the Snowshoe Mountain Resort in Snowshoe, WV. Spanning the resort’s 11,000 acres in the Allegheny Mountains, the internationally viewed series of races, broadcast over Apple+ and Red Bull streaming networks, among other outlets, encompassed downhill, cross-country, and short-track bike racing.

Gathering the audio for the event, which features announcers along the race courses and at music stages at the start and finish lines, was a Herculean task.

A massive fiber network, owned by the resort and used for connectivity for such locations as ski lifts, took care of most of that, and Dante endpoints, such as loudspeakers for announcers and music, rode on a strand of the network dedicated to the event.

“It wasn’t a full 6 square miles that were covered but rather zones within that area, such as the cross-country racecourse and the downhill racecourse, which were the base courses for the event,” explains Austin Addair, production manager, Midway Production Services, which provided the event’s audio systems. “We were able to add a speaker or a video wall wherever we needed to along those courses and in the other networked zones. We had a broadcast-type control room set up in one of the buildings as the command center for the distributed audio around the mountain, handling all of the routing and mixing of audio as well as the comms, which were all on the network.” 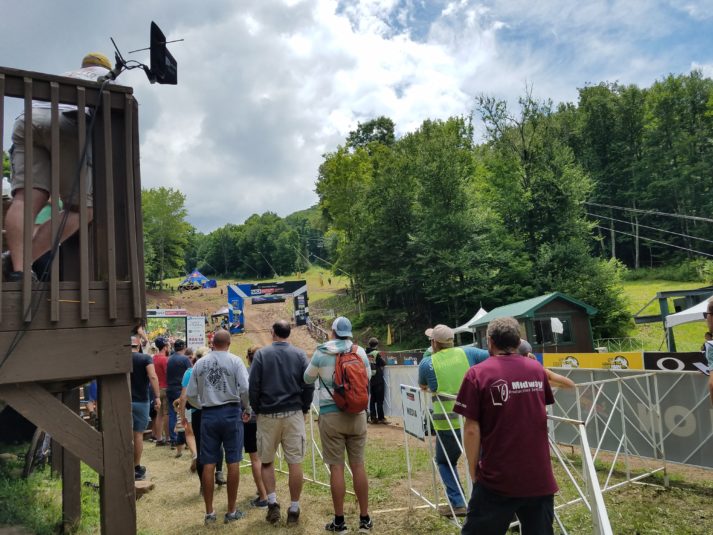 Because both events and spectators were widely dispersed, he adds, in some instances, announcers were on stages, calling the races from video displays. That was enabled by the fact that the network had extremely low latency, with no shared resort traffic during non-skiing months.

For example, for announcers at the starting line for the cross-country race, a cable would have been restrictive. There, Midway Production Services deployed an RF Venue Diversity-Fin antenna. “This was a pretty traditional setup — a wireless microphone transmitter to a receiver — but the distances and movement had to be considered,” says Addair. “The announcer would be roaming the area so we had to make sure we maintained constant connectivity.” He notes that Midway’s Greg Fairbanks worked on the network and Dante switching and routing and Mike Snow supervised network operations. 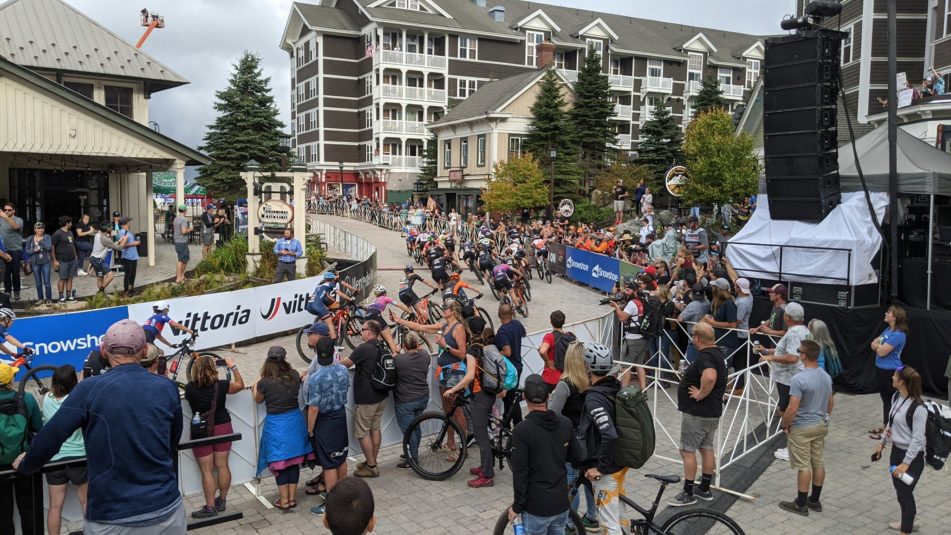 Another problematic area was at the downhill-race finish line, where the audio from the Stageline SL100 mobile music and announcements stage had to reach back up the hill. To facilitate that, JBL delay speakers were deployed upwards from the stage, using the fiber network. However, given the topography in certain areas, a cabled solution would have required having wires crisscross the track several times. So the team combined a Shure in-ear ULXD transmitter and a high-gain RF Venue CP Beam helical antenna, transmitting from the PA system at the stage to a D-Fin antenna connected to the delay speaker and ULXD receiver. (The handheld wireless microphones were also Dante-enabled ULXD’s.)

“We were able to reach more than 500 ft. using this arrangement,” says Addair, noting that the trick has been a lifesaver in other challenging wireless situations. “It’s something we’ve used before, and [it] reliably gets us well past 500 ft. this way.”

The Mercedes-Benz UCI Mountain Bike World Cup event is notable in a number of ways, not least of which is its wireless operations. Although the event takes place within the exclusion zone of the Greenbank radio astronomy observatory — putting it in one of the least-dense RF environments on earth — the races take place as thousands of cellphone-toting spectators, racers, and others roam the area, creating their own RF challenges.

“This is one of the least RF-polluted environments on earth,” says Addair, “but you never know how the crowds and other things at the event can affect that.”