It may be a holiday weekend for most Americans, but Labor Day Weekend at ESPN? It’s time to get down to work.

Week 1 of the college football season begins tonight, and the broadcaster is poised to produce and deliver more than 60 games over the next five days across its various linear channels and streaming platforms. 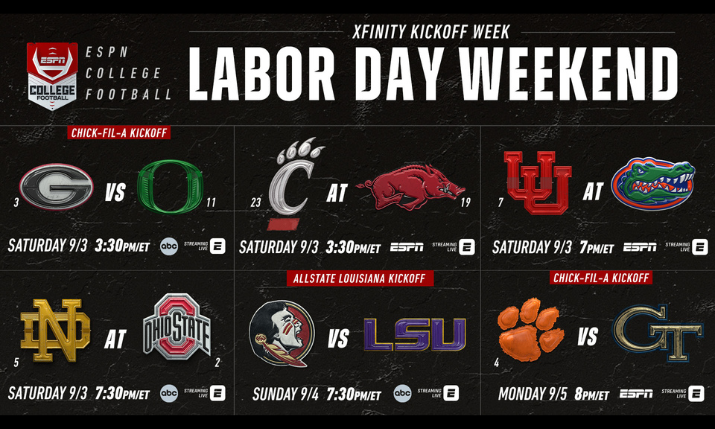 All in all, the schedule features nine of the Top 10 teams in the preseason AP poll and 20 of the Top 25.

“This is the best Week 1 that I can remember since I’ve been on the [ESPN] college-football team,” says Tommy Mitchell, senior operations manager, ESPN. “We always have a good game, but this series of Week 1 games is the best, top to bottom. The challenge is that we’re used to an ABC primetime show and the ESPN primetime show being the big circus and getting all the toys. There are so many good games this weekend that crews are not used to getting all the extras that we are giving them because the games warrant it.”

Toys for the Top

College football is an operational and logistical feat all its own, but, at the top of the programming schedule, ESPN crews are bringing some new wrinkles and resources to the most elite games. The weekly ABC Saturday Primetime game — which is returning its top production team of producer Bill Bonnell and director Derek Mobley — has upgraded its collection of PylonCams with new Dream Chip cameras to further boost image quality.

The new NEP Supershooter 6 is the major facilities upgrade for “G Crew” (as it’s called internally), the show that typically features Joe Tessitore at play-by-play. Rolled out in May, the IP-based truck worked both the Women’s College World Series and Men’s College World Series for ESPN in June. It’s the first football deployment for the 1080p-ready and 4K-capable unit, which houses a Grass Valley Kayenne X-Frame switcher, a Calrec Apollo audio console, a collection of Sony HDC-3500 cameras, two 5500 cameras, a Lawo IP router, multiviewer, and EVS XT VIA servers.

In terms of additional toys on marquee linear games, SkyCam is deployed at every ABC and ESPN Saturday primetime game. According to Mitchell, a shallow–depth-of-field camera rig will be added to selected shows throughout the season. This Saturday, there will be one at the Notre Dame–Ohio State game.

As was the practice last year, all SEC “home” games will receive a PylonCam package. That includes any neutral-site games where the SEC school is the “home” team. For example, Sunday night’s Florida State–LSU matchup (7:30 p.m., ABC) takes place at the Mercedes-Benz Superdome in New Orleans, but, since LSU is the home team, that show will get the PylonCam complement.

This year, ESPN is again committed to producing one native-4K game per week. The series started last weekend in Week 0 with the dedicated crew producing the Howard–Alabama State matchup. The series is currently the only package of football games (pro or college) to be produced in full native 4K; they don’t feature high dynamic range (HDR). The 4K games are produced out of Lyon 14 mobile unit.

“We love doing [those 4K games],” says Mitchell. “It gives us the opportunity to try some things. It’s tough to do. There’s new technology coming in the 4K realm. When you are doing things natively, it makes our switcher a quarter of the size. But the new boards that are coming out will be able to accommodate that so we’ll be able to do more. We’re limited at the top level [on the number of] sources we can put into the switcher because it’s 4K. So we’ve used that show to find out what we can do currently, what the limitations are, and [how to push] the boundaries: let’s see what we can break and still fix on the backend. That show has been a lot of fun.”

Then there’s the long tail and the vast digital inventory of the college football season. ESPN+ will live-stream more than 500 games this season. They will be produced via workflows ranging from all-out onsite truck productions to hybrid REMI models, to packagers, to games produced by schools from their own control rooms. In fact, some games will be produced by athletic department-run crews from campus control rooms built to support the ACC Network and SEC Network. Also, some Big 12 and American Athletic Conference schools have the resources capable of supporting football production for ESPN+ and ESPN3.

According to Mitchell, school-produced games have been high-quality, and the model helps the broadcaster handle the heavy operational load it faces each weekend of the season.

“It was never the intention to have college football produced that way,” he notes, “especially as quickly as we ended up having to do it. COVID drove that. From where we were in the process three or four years ago to where we are today with full-fledged big-time college football games [produced by the schools] on linear networks, that’s incredible. The quality has increased exponentially over the years. [The schools] have been great partners. It’s a big priority for the company to get those [operations] up and running.

“Will football always be there?” he continues. “I don’t know. As more sports get broadcast and as the calendar grows, those schools are [tasked with a lot]. Having that many partners who can produce such high-quality broadcasts has been a boon to us because it [means] far less logistics for us at a time when the logistics have become so much more challenging.”