Northwestern-Nebraska matchup in Ireland was produced from L.A.

As the calendar flips to fall, Fox Sports kicks into high gear with a full slate of college-football broadcasts. Beginning with the broadcast of Nebraska vs. Northwestern in the Aer Lingus College Football Classic at Dublin’s Aviva Stadium on Aug. 27 and the start of the Big Noon Saturday schedule with tonight’s Penn State–Purdue matchup (8 p.m. ET, Fox), the broadcaster will combine on-premises and remote workflows for the main game production and new elements in its heavy onsite presence for the Big Noon Kickoff pregame show.

“Whether it be from [our facilities] in Los Angeles or Charlotte, NC, HRPs [Home Run Productions] have become a huge part of our business,” says Dave Jones, director, technical and field operations, Fox Sports. “It’s a fun challenge, but it’s important that every game gets the same amount of attention.”

For the first time in five years — Boston College and Georgia Tech faced off in Dublin on Sept. 3, 2016 — college football was broadcast from Ireland. For the season opener for both Northwestern and Nebraska, the broadcaster deployed its Home Run Production workflow and 10 cameras, including four at 6X super-slow-motion and one RF handheld. Because only four days separated that game from tonight’s Big Ten nightcap in West Lafayette, IN — plus the uncertainties of circumstances of international travel when the game was announced in the spring — producing the Dublin show via HRP was the logical solution. 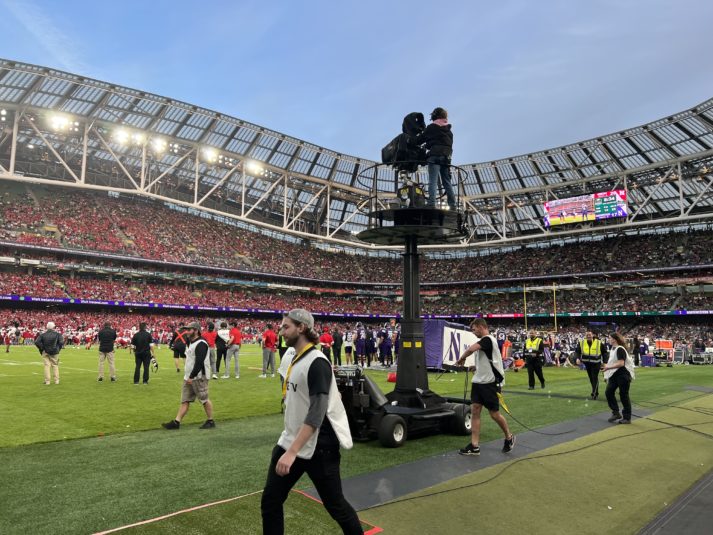 Fox Sports kicked off its 2022 college-football schedule with Northwestern vs. Nebraska in Dublin’s Aviva Stadium on Aug. 27.

Operationally, Fox Sports’ Pico facility in Los Angeles drove the bulk of the production with a small contingent of employees working from Dublin. Fox Sports VP, Field Operations and Engineering, Brad Cheney and Technical Producers Bill Moore and Tom Lynch led the onsite crew at Aviva Stadium. Tapping into the local workforce for close to 90% of the onsite staffers, the broadcaster worked closely with NEP Ireland on this broadcast.

“A lot of [the workers] live in Ireland,” notes Jones, “but a couple people that are traveling from England have done some other work with us for NFL Europe and MLB games in London. NEP Ireland has been fantastic to work with, and the decision to do this game as a Home Run was the right one for this year.”

Stateside, Big Noon Kickoff and Big Noon Saturday officially begin tonight but really get moving and grooving with No. 1 Alabama at. Texas in Austin on Saturday, Sept. 10. As one of the numerous headliners on Fox Sports’ package of A games, this game will have Game Creek Video Gridiron mobile unit outside Darrell K Royal–Texas Memorial Stadium and housing the three EVS operators. Inside the lower bowl of the stadium, the 16-camera complement will include end-zone pylon cams, an RF Steadicam, an additional handheld, and, potentially, other devices. For these high-profile games, all hard cameras will be Sony HDC-5500’s at 6X speed. 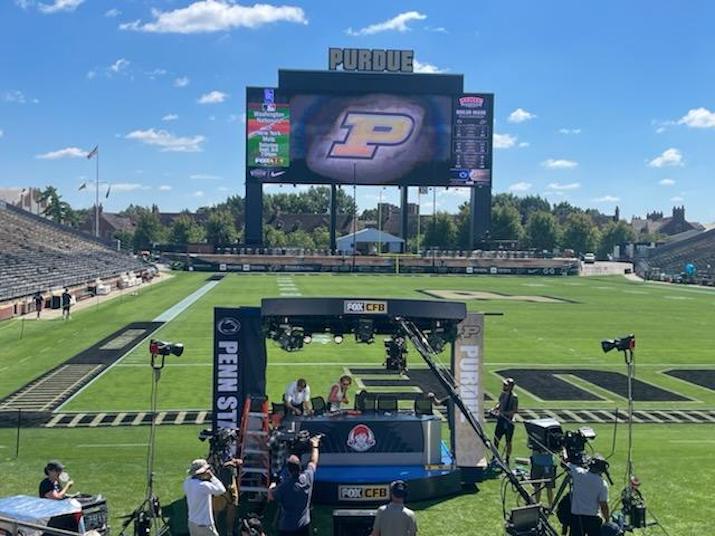 From a hardware standpoint, the traveling show that is Big Noon Saturday has to abide by the space available in each stadium. “The challenge is finding real estate to put all of our gear,” says Jones. “There are some other cameras that we would like to use, but available space can be hard to come by.”

Outside of the onsite production and operations teams, a handful of remote workflows will be deployed for this bout in the Lone Star State. Fox Box operation and additional statistical implementation, for example, will be done from the Pico facility.

On the talent side, Big Noon Saturday contests will once again be called by electric play-by-play commentator Gus Johnson, analyst Joel Klatt, and reporter Jenny Taft for the sixth consecutive year. New Fox Sports play-by-play commentator Jason Benetti was alongside analyst Brock Huard and reporter Allison Williams for the game in Dublin. Other personalities featured on college-football packages include Tim Brando and Spencer Tillman for University of Illinois vs. University of Indiana on Friday, Sept. 2; Noah Eagle and Mark Helfrich for South Dakota State vs. University of Iowa on Saturday, Sept. 3; Alex Faust and Petros Papadakis, who called UConn vs. Utah State on Saturday, Aug. 27; and Devin Gardner and Eric Collins for Cal Poly vs. Fresno State on Thursday, Sept. 1.

One of the more fun aspects of Fox Sports’ involvement with college football, Big Noon Kickoff will broadcast from a new campus each week of the season, joining the passionate fanbase of each institution for the first time. With host Rob Stone and analysts Brady Quinn, Reggie Bush, Matt Leinart, and Urban Meyer, the show will also feature the likes of Tom Rinaldi, Bruce Feldman, Clay Travis, Emmanuel Acho, Chris Petersen, and Mike Hill throughout the season. 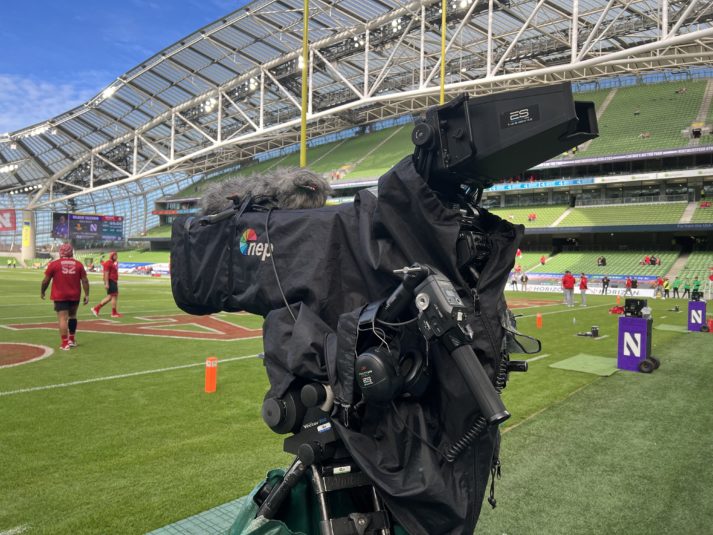 Besides camera gear, NEP Ireland supplied the bulk of the onsite staffers in Dublin.

Creatively, the pregame show is adding a handful of toys to augment the viewing experience. Supported by Fletcher, the show will have new robotic-camera positions to show off the crowds in attendance. The crew for each telecast will be led by SVP, Production, Ken Camera; VP, Production, Bardia Shah-Rais; Coordinating Producer Jonathan Kaplan; Senior Producer Scott Riddell; and Director David Faller.

Logistically, putting this year’s shows together took a ton of preparation and planning. Because each campus has its own layout, site surveys began in May to discover any physical barriers and how to work with each university to get the most out of the campus.

“We take a look at everything from egresses to where the students will be located,” says Rob Mikulicka, director, remote studio operations, Fox Sports. “Since our show splits between our outside set and inside on either the field or the concourse, we have to be in close proximity [between outside and inside] to get to the new desk by the time we come back on-air.” 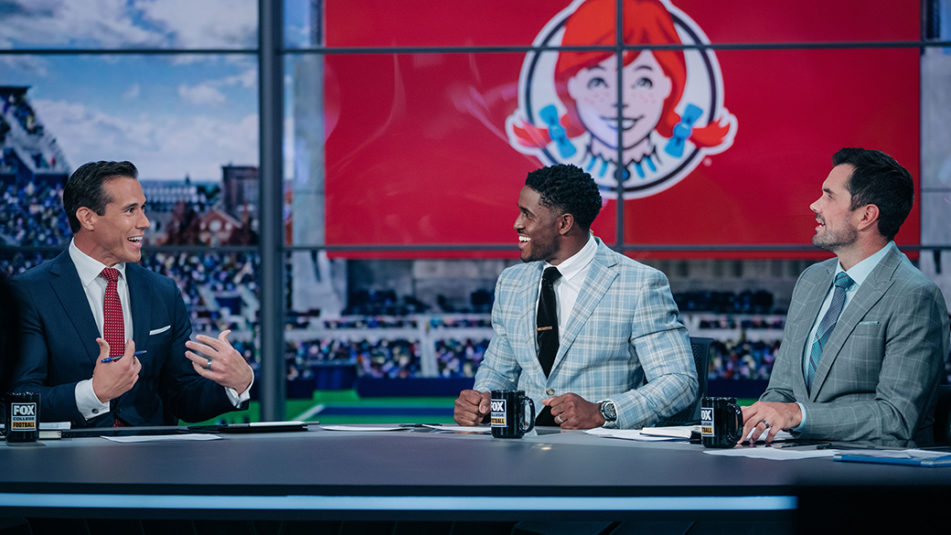 Developed by Filmwerks, the desk situated outside the stadium combines multiple designs from previous sets that prioritize efficiency for a quick setup. According to VP, Remote Studio Operations, Rod Conti, the main set also needed to be flexible, durable, and mobile to withstand any environment as well as any type of terrain. With the Big Noon Kickoff schedule comprising locations across the country at different times of the year — for example, No. 9 Oklahoma at Nebraska in Lincoln, NE, on Saturday, Sept. 17; No. 8 Michigan at No. 2 Ohio State in Columbus, OH, on Saturday, Nov. 26 — the structure will be put to the test.

“One of the biggest challenges is tying [our set] to the game truck in the compound because we share cameras and, at times, transmission,” says Mikulicka. “Adding a layer on top of that, if I’m going to a school that I’ve never I’ve been to before, I need to forge a relationship with them and make sure that they trust what we’re doing.”

Busy Stretch Ahead: College Football Will Give Way to FIFA Men’s World Cup in Qatar

Fox Sports’ busy year will get even busier toward year’s end. The upcoming college-football slate can be seen as a jumping-off point for the broadcaster, which will also have to handle games on the NFL schedule and the massive production of the 2022 FIFA Men’s World Cup on the other side of the world in Qatar. To execute that 28-day-long international soccer competition while also providing high-quality college-football productions, Jones and his crew — Technical Producer Carlos Gonzalez and Brian Obert; Technical Managers Mike Vaughn and Kory Scudder; and Senior Operations Manager Lindsay Waine — have focused on planning. 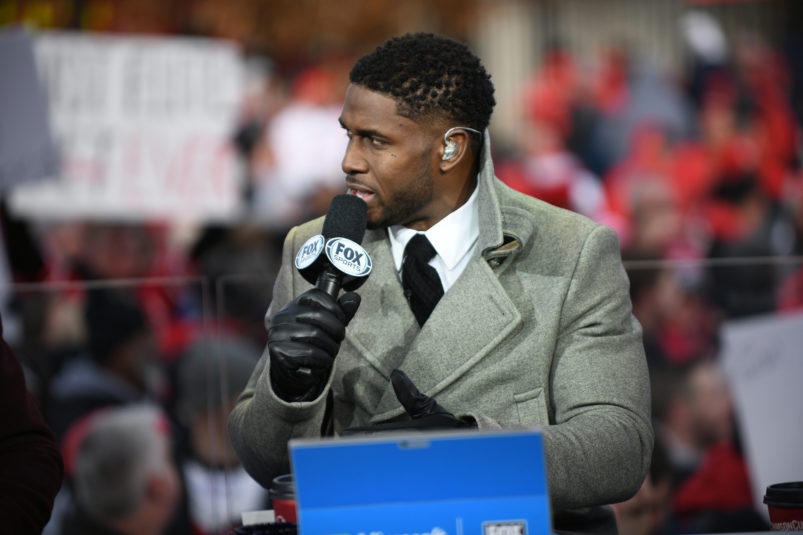 Former USC running back Reggie Bush returns this season as an analyst on Big Noon Kickoff.

“We’ve had meetings upon meetings and even had a retreat a few weeks ago to talk about [this time of the year],” Jones says.

Mikulicka and his crew are divvying up tasks on both the studio-operations and the game-operations fronts. For example, Mikulicka will remain in the U.S. as the lead for Big Noon Kickoff, and Conti will lead the charge in Qatar. Despite the gauntlet that is fall and winter on Fox Sports, teamwork and collaboration will be the guiding light.

“It was a lot of going back to the drawing board and seeing how we can support each other on our respective shows,” says Mikulicka. “Qatar has definitely thrown a wrench into our scheduling plans, but we’ll be able to pull through this. What we’ve done has worked so far, so now it’s about just managing our time and setting our teams up for success.