Partners like Van Wagner, Creative Technology, SMT are key to the process

The lights of Broadway don’t shine any brighter than those at USTA Billie Jean King National Tennis Center during the US Open. For fans attending the two-week spectacle in Flushing, NY, the United States Tennis Association is at the controls of a thrilling in-venue experience with the support of top-of-the-line technology and key partners.

“We’ve been trying to push [the envelope] as far as we can,” says Nicole Munroe, director, pro tennis marketing and content, USTA. “We want to create content that elevates the experience for our fans not only in the stadium but also at home.”

The USTA Billie Jean King National Tennis Center is an expansive complex covering 46.5 acres of prime space in the NYC borough of Queens. Headlined by two premier venues — Arthur Ashe Stadium and Louis Armstrong Stadium — the grounds also feature the smaller Grandstand and standalone courts where men’s, women’s and doubles action takes place. Outside these venues are concession stands, fan activations, and other points of interest for fans milling about. 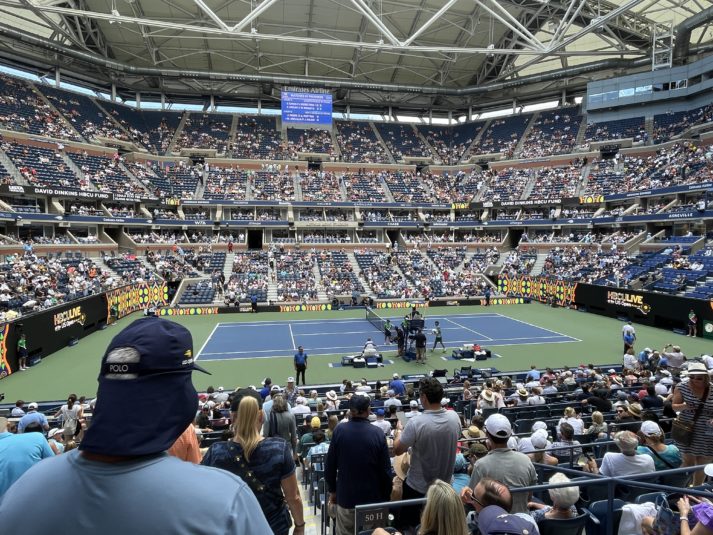 Each of the primary venues has its own set of LED displays. Louis Armstrong has two main videoboards to display content to the spectators. Within Arthur Ashe, videoboards are located in the north, south, east, and west sections. Closer to the court, the USTA has installed smaller screens perpendicular to the net for critical timing information, such as the serve clock and medical timeouts. The Grandstand features two LED videoboards.

In both Louis Armstrong and Arthur Ashe are multiple fascia boards for sponsorship messaging and dynamic displays to introduce the players and set the stage with dramatic images of New York City. Arthur Ashe is equipped with four separate fascia displays: the two smaller ones are dedicated to closed captioning and positioned along the length of the court; positioned behind each player, the main displays drive the creative elements being played. The systems comprise 14 million pixels and are powered by an eight dual-channel Ross XPression Tessera SE, two XPression Tessera Master Systems, and a Ross Ultrix 64×64 router with quad link to 12G GearBoxing. Louis Armstrong features a similar fascia display behind each baseline. 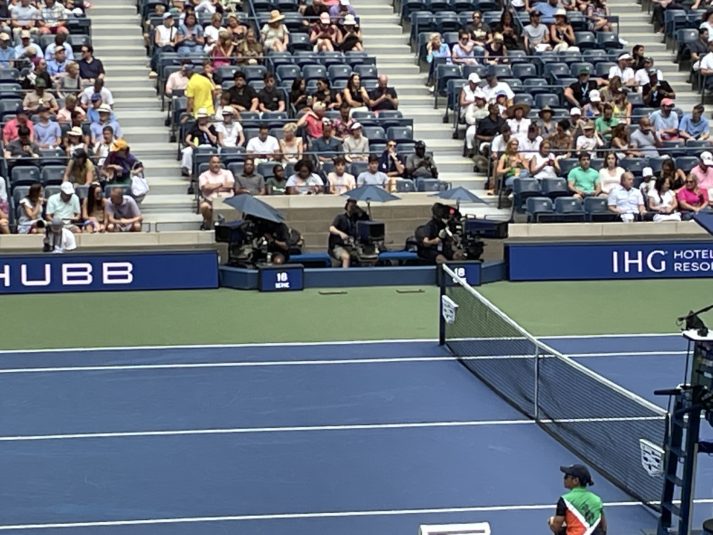 Creative Technology has supplied smaller screens for information like the serve clock and medical timeouts.

From a video perspective, the three main stadiums — Louis Armstrong, Arthur Ashe, and Grandstand — are covered by two main hard cameras and wireless RF cameras. The videoboard content is also supplemented by footage from the ESPN world feed.

Outside the venues, fans are kept up to date on the day’s results through video displays at certain points around the grounds. The main fixtures are the LED display in the South Plaza, an octagonal ribbon board over the gift shop between Louis Armstrong and Arthur Ashe, and a screen in both the food court and the building reserved for Cadillac, the tournament’s title sponsor.

The LED displays wow the spectators in Queens every day, but, when something goes wrong, the crew of Creative Technology is on hand to fix any problem. The main provider of the videoboards and fascia displays has a team onsite to troubleshoot and reconfigure visible issues. 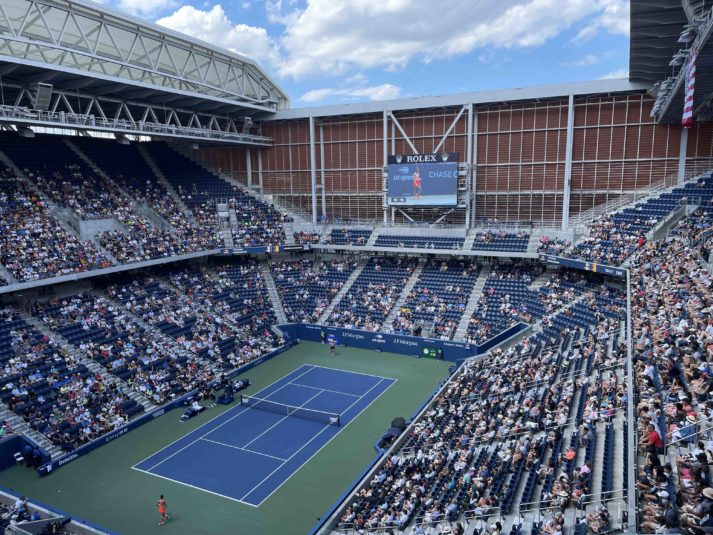 The Van Wagner productions team runs the operation from the three-year-old control room at Louis Armstrong Stadium, which houses a Ross Carbonite Black switcher for Louis Armstrong, a Ross Carbonite Plus switcher for Grandstand, a 12-channel EVS replay server, RTS intercom for in-house comms, and a 180×216 Miranda NVision router. Led by Van Wagner’s Director, Technical Operations, Nate McCoart and working closely with Munroe, the team implements content for the main videoboards and visuals on the fascia displays.

Having debuted in 2019, the fascias are run with a strict protocol on timing. “During our first year,” says Munroe, “we limited our animations to when we were off the air. We started out with a 15-second buffer on each side [of the break] to make sure that nothing was getting shown [on the broadcast].” 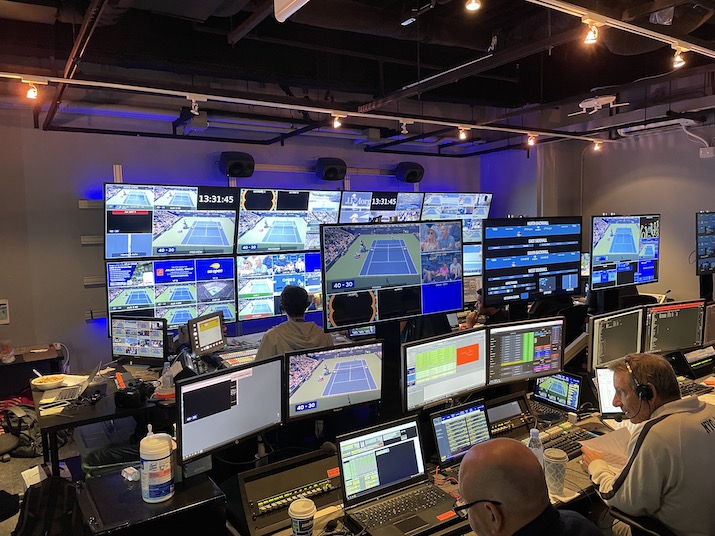 Now, after several years of testing, the production team is using the boards to fulfill sponsorship needs during the tournament. “During changeovers,” she adds, “we’re meeting all of our contractual obligations with partner signage. We also have brand messaging that we’re running not only for the US Open but for USTA.”

If this is Serena Williams’s last dance on the main stage in the Big Apple, the 23-time Grand Slam winner is adding to the memories with more highlights and a stellar upset of No. 2 Anett Kontaveit in primetime on Wednesday night. During Williams’s first two scheduled matches, the USTA and ESPN teamed up to push out a pair of features to honor her legacy to the sport and her dominance of the US Open. Planning for the two spots began less than three weeks before the beginning of the competition. 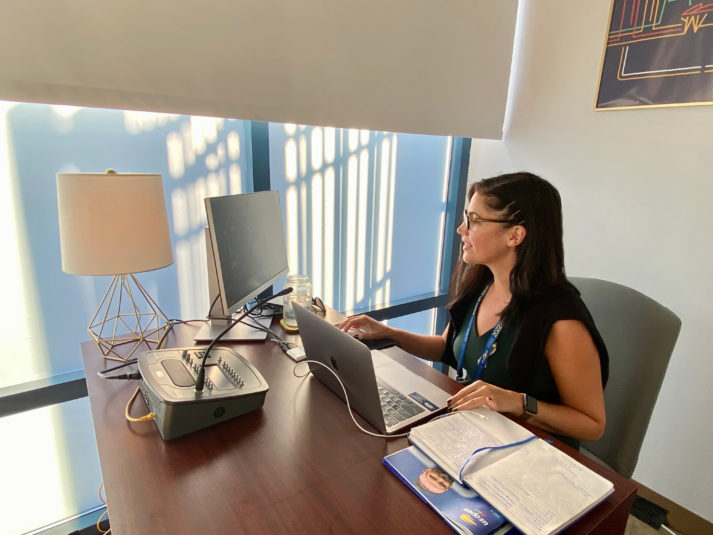 USTA’s Nicole Munroe communicates with the control room from her office via RTS intercom.

“Once her Vogue article came out,” says Munroe, “it was all hands on deck, and we needed to figure out how we were going to approach it. There’s an agency that I work with, Boomshot Productions, and they were able to deliver a script that captured the tone that we wanted for two of our pieces.”

The first piece aired prior to Serena’s entrance to the court. Titled “The Queen of Queens,” the feature is narrated by Queen Latifah and recognizes Williams’s six US Open Championships and her impact on this tournament. Led by Boomshot Productions Creative Directors Brendan Gillen and Thomas LaGrega and Executive Producer Kim Daniels, the project was assembled by Editor Mark Grassia, Assistant Editor Kemp Taylor, Sound Designer Rick Van Benschoten, and Color Refinery Senior Colorist Rob Bessette.

Run at the conclusion of her matches, the second feature offers a thank-you to Serena for all that she has done for tennis. Titled “Dear Serena,” the piece is narrated by Oprah Winfrey and features footage of her first US Open victory, in 1999.

Operationally, USTA, VSWE, and ESPN combined their efforts to show this content both in the venue and on the broadcast. Delivered in four channels of split-track audio — two in stereo for the broadcast, the others for voiceover and in-venue music — the videos were done with the help of ESPN’s onsite mobile unit.

“We sometimes struggle with the audio in our venues,” Munroe notes, “so we wanted to troubleshoot [our audio] in advance to make it a good experience for the fans and Serena. We ended up delivering both of those pieces of content to ESPN, and our in-venue audio producer was able to dial in what we needed. To me, the music was the least important element because we wanted the script to rise to the top.” 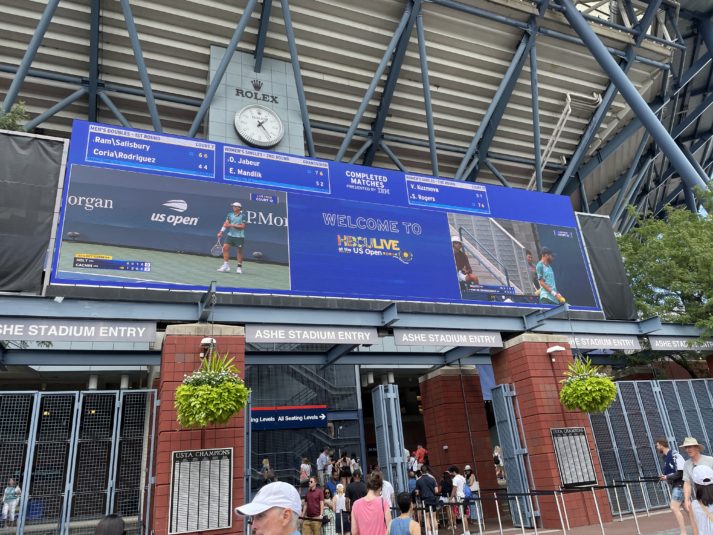 Arthur Ashe Stadium has an LED display on its exterior.

In addition, Boomshot Productions will continue to update the US Open brand manifesto — the sizzle reel that runs at the beginning of each session and turns into an overall recap near the tournament’s conclusion — with new highlights and moments as the Open progresses.

Along with stunning visuals, replays and coverage have been augmented with a new graphics package. Seen mostly on the ESPN world feed, the videoboards and fascia displays have a refreshed look and, as always, real-time data and scoring provided by SMT. In a sport that relies heavily on statistics and percentages to explain the back-and-forth nature of a match, it’s extremely important for fans to remain up to date.

“SMT is independently operating the fascias, which are the prime source of scoring,” says Munroe. “Their data is running our head-to-head graphics during player walk-ons. They have operators onsite in the control room and are collaborating with the team at Van Wagner.” 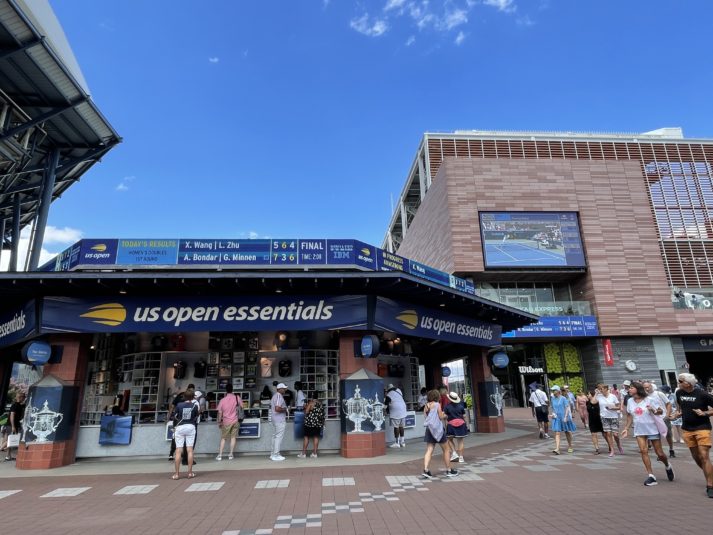 Fans are kept up to date by multiple screens in the grounds, including this octagonal display with data and scoring from SMT.

As for the new creative direction of the onscreen graphics, the rebrand has helped with presentation of the matches seen from the grounds, she adds. “We made sure that there was a cohesive thread throughout the different visualizations that we use.”

16-Year Evolution: Munroe Reflects on How In-Venue Entertainment Has Changed

In her 16th consecutive US Open, Munroe is at the forefront of workflows and technologies that weren’t in existence during her first tournament, in 2007. First deployed for the COVID-impacted tournament in 2020, integration of social media and fan-generated material is still evident, along with the ability to create an engaging environment with available resources.

Says Munroe, “[2020] showed me that our in-venue show and the broadcast need to be looked at in a way that allows the fans at home, who can’t otherwise be there with us, to feel like they’re a part of [the action]. With the addition of the LED screens that we have now, it’s incredible to see how dynamic they can be.”