IBC, in its first live and in-person iteration in nearly three years, attracted 37,071 visitors from 170 countries to Amsterdam’s RAI to visit more than 1,000 exhibitors and celebrate innovation, learning, and collaboration.

Speaking about the success of the event, IBC CEO Michael Crimp said, “It was great to see, feel, and hear the buzz of a live IBC once more. The quality of visitors has been outstanding and there was a real sense of positivity. We are stronger together.”

SVG was on the ground at IBC 2022, as were many of its audio sponsors. Here’s what they were talking about. 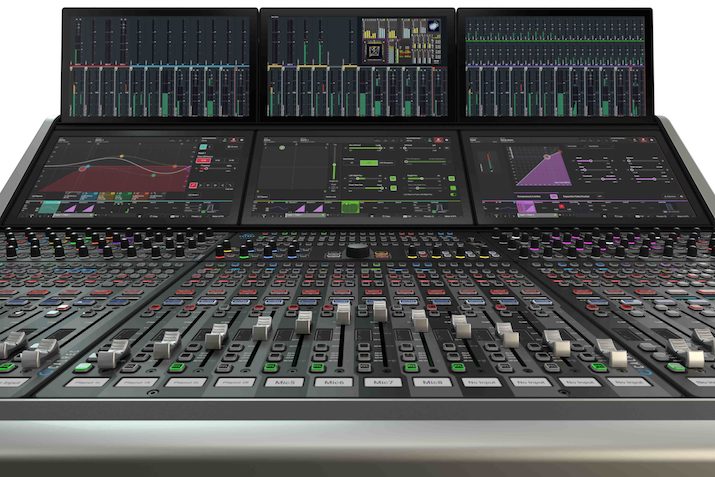 Calrec also introduced a comprehensive system of user templates to instantly change the hardware user interface to meet changing requirements or user preferences. Argo is built around an expanded version of Calrec’s popular ImPulse IP core and can power four independent mix environments, including headless mixers accessed on the public internet, with each mixer able to access more than 2,350 processing paths on a single console. This provides enough power to deal with the biggest immersive and NGA mixing demands. New operational features include Key Inputs and Ducker; full EQ and Dynamics on Auxes and Tracks; Flexible Spill; Inserts on Auxes; Variable slopes on EQ shelves and filters; Flexible panel layouts (Wilds). Argo has an increased DSP engine providing 2,496 channels on a single console, along with physical flexibility up to eight sections to provide up to 96 faders.

Lawo showcased the latest additions to its IP video infrastructure offerings. In its European debut was .edge, an SDI-to-IP interface that includes a JPEG XS compression module for Lawo’s V_matrix platform. The company also exhibited new features, such as health monitoring, for its Home IP-management platform. Noting what it feels like to be back at IBC, Lawo CMO Andreas Hilmer said, “This show is about meeting people, and it’s so good to finally be able to do that again in immersive 3D! We’ve been completely blasted on the stand since the show opened; it’s going brilliantly.”

Pliant exhibited new hardware to serve the audio sector of sports-video production. Making its IBC debut, CCU-08 CrewCom Control Unit is the latest addition to the CrewCom family. Offering features seen on the CCU-22 and CCU-44 product, this new iteration gives clients the chance to use up to eight 4-wire ports. The CCU-08 CrewCom Control Unit is capable of monitoring and maintaining any device across CrewNet regardless of radio-frequency bands in use. In addition, according to Pliant VP, Global Sales, Gary Rosen, new challenges confronting the company in the current age of production include the need to monitor individual frequencies so as not to interfere with other RF activations.

For Q5X, IBC 2022 was the first time it had been able to demonstrate digital player microphones in Europe, according to CEO Paul Johnson. “It’s a result of our collaboration with Shure, and it has been very popular with the NBA, which adopted it for their coaching microphones,” he said, “It’s attractive for two reasons: it allows encryption, which is important, but also, with the density of signals in the spectrum, we can put in more frequencies and channels.” The company also exhibited a new clip that makes it easier to quickly connect miniature mics. 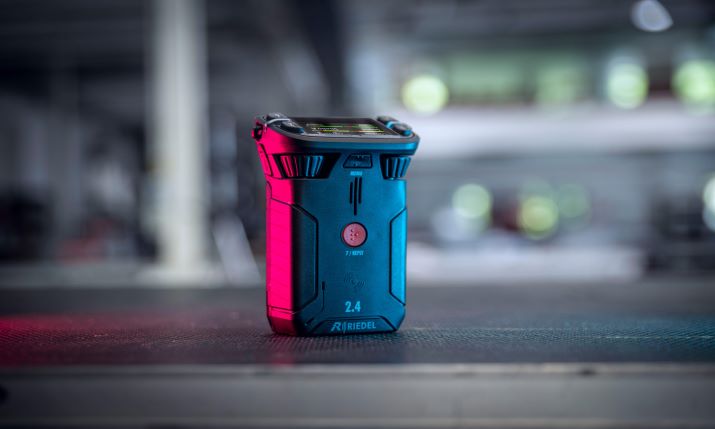 Celebrating the fifth anniversary of the state-of-the-art wireless intercom system Bolero, Riedel Communications exhibited its new Bolero 2.4 wireless intercom system. Although Bolero has been successful in taking intercoms from the often congested 2.4 GHz spectrum to the 1.9 GHz DECT band, the company is combining technologies to make 2.4 GHz a possibility for sports broadcasters: RF diversity, provided by a real-time processing DSP engine for multi-path reflection suppression for 2.4 GHz, with a multi-retransmit mechanism on top.

“Bolero 2.4 GHz allows OBs to move across regions, unconstrained by DECT frequencies,” said Riedel Executive Director, Product Management Jake Dodson. “While DECT 1.9 GHz is a global standard, you can’t use it in places like China or South Korea. Before, 2.4 GHz never had the stability; you’d have congestion problems in stadiums or other close environments with more interference as it’s close to Wi-Fi. Not now.” Riedel also launched the new Audio Monitoring App (AMA) for its 1200 Series SmartPanels. With the AMA — combined with Riedel’s Intercom App and Control Panel App — the RSP-1216HL and RSP-1232HL SmartPanels offer users audio-streaming monitoring, intercom, and control capabilities in a single keypanel, saving valuable rack space.

RTS Intercom Systems used IBC 2022 to promote its work in multiple facets of the industry: efforts in IP, the cloud, and wireless capabilities and providing a digital interface for all clients. On the IP front, the company is creating SMPTE ST 2110-enabled products that offer channel-by-channel selectivity, backwards compatibility, simplified native implementation, and OMNEO media-network architecture. Other solutions on hand at the RAI addressed glitch-free communications, redundancy, VLINK Lite, and more.

Salsa Sound highlighted three demos. One is a world-first automated MPEG-H production showcasing true object-based audio. In partnership with Fraunhofer, Salsa Sound has implemented the MPEG-H authoring tool with MixAir, its AI-driven automatic–audio-mixing solution allowing automated MPEG-H production for live sports coverage. Said Salsa Sound co-founder Rob Oldfield, “You can interact with the audio to create audio personalization, and it’s all done automatically in MixAir. We’ve been talking about personalization for years, and it’s amazing to be able to show this for the first time.” Salsa Sound also showcased 360 immersive football in partnership with BT Research and Innovation and BT Sport, based on part of the 5G Edge-XR project. “We’re doing adaptive immersive audio so the audio matches the video,” said Oldfield, “so you can experience sound in different parts of the stadium: as you move, the audio follows. This is important because, without the audio matching the visual perspective, it’s just not as compelling. If the visuals are interactive, the audio needs to adapt accordingly so the viewer buys into it. This is volumetric audio.” In addition, MixAir was demonstrated with an as-live sports production showing AI auto mixing stems and multiple output formats.

Along with plenty of microphones and other gear, Sennheiser showed off its efforts in transforming immersive audio. The big offering was AMBEO, a two-channel Spatial Audio unit that translates an original immersive mix into a two-channel mix. “We’ve licensed it to Netflix,” said Renato Pellegrini, AMBEO project leader, Sennheiser, “and they use it to take Dolby Atmos mixes and bring it to two channels for people that listen to content via their TV speakers, laptop, or tablet. This can also be useful for sports and be a big game-changer because it brings the work done for an immersive production to everybody rather than just those who have an Apple Spatial Audio system.” Also exhibited was a workflow for mixing audio for VR while wearing a VR headset, ensuring that the audio mix best meets the viewer’s experience. Added Pellegrini, “It’s a very easy way to do the mix properly where there are moving sources and other things.”

The Telos Alliance co-located with Grass Valley and AWS exhibits, where the Telos Infinity virtual intercom platform was demonstrated, respectively, on the Grass Valley Agile Media Processing Platform (AMPP) and on AWS. The Telos Alliance exhibit featured a team of audio and broadcast experts ready to collaborate with visitors on projects and concepts, as well as providing insights into how hardware, software, or a hybrid combination allows them to enhance capabilities or solve problems in their facilities. “As we continue to provide more solutions to the industry,” said Marty Sacks, EVP, sales, marketing and strategy, Telos Alliance, “IBC 2022 is the perfect event at which to showcase our continued work across a wide range of file-based and real-time media workflows, including virtualization to empower our customers to broadcast without limits.”