Tonight’s a historic night for the NFL, which kicks off its first-ever broadcast package carried exclusively on a streaming platform with Amazon Prime’s Video’s Thursday Night Football. However, that’s not the only historic debut taking place during tonight’s Chiefs-Chargers matchup. The broadcast also marks the launch of arguably the most state-of-the-art set of mobile units ever built: Amazon’s Prime One and Prime Two native-IP fleet from Game Creek Video. 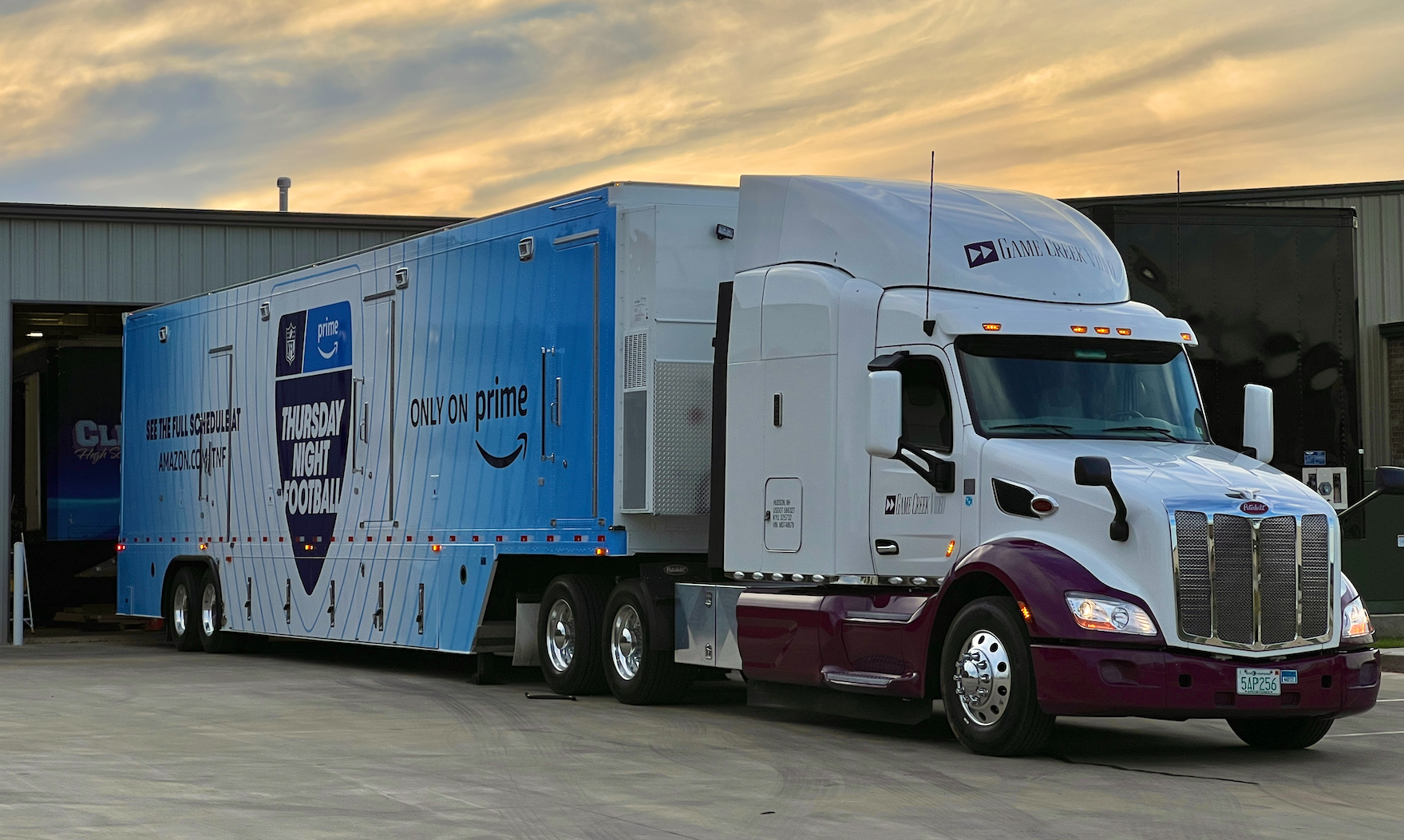 “From a tool-set standpoint,” says JP Palmer, senior manager, live production technical operations, Prime Video, “we are bringing a Super Bowl-level show out every week, and we needed a facility that could support that. We didn’t approach this [thinking about] what [other broadcasters] had done in the past. Instead, we asked, “How can we provide the best customer experience humanly possible?’

“We started with a clean slate and looked at every single element of the production from that lens,” he continues. “We ended up taking many new approaches with this [mobile unit] so that we could provide our production team with the tools and the core technology to produce the most amazing game possible.”

A Truck Unlike Any Other Is Built on a Tight Timeline

Prime One, the main game truck, is composed of five units (A, B, C, D, and E), and Prime Two is a standalone truck that will serve TNF’s traveling pre/postgame and halftime studio show over the next 15 weeks. In addition, Prime Three is a custom-built, fully loaded office trailer that one Prime Video staffer described as “an office palace.” 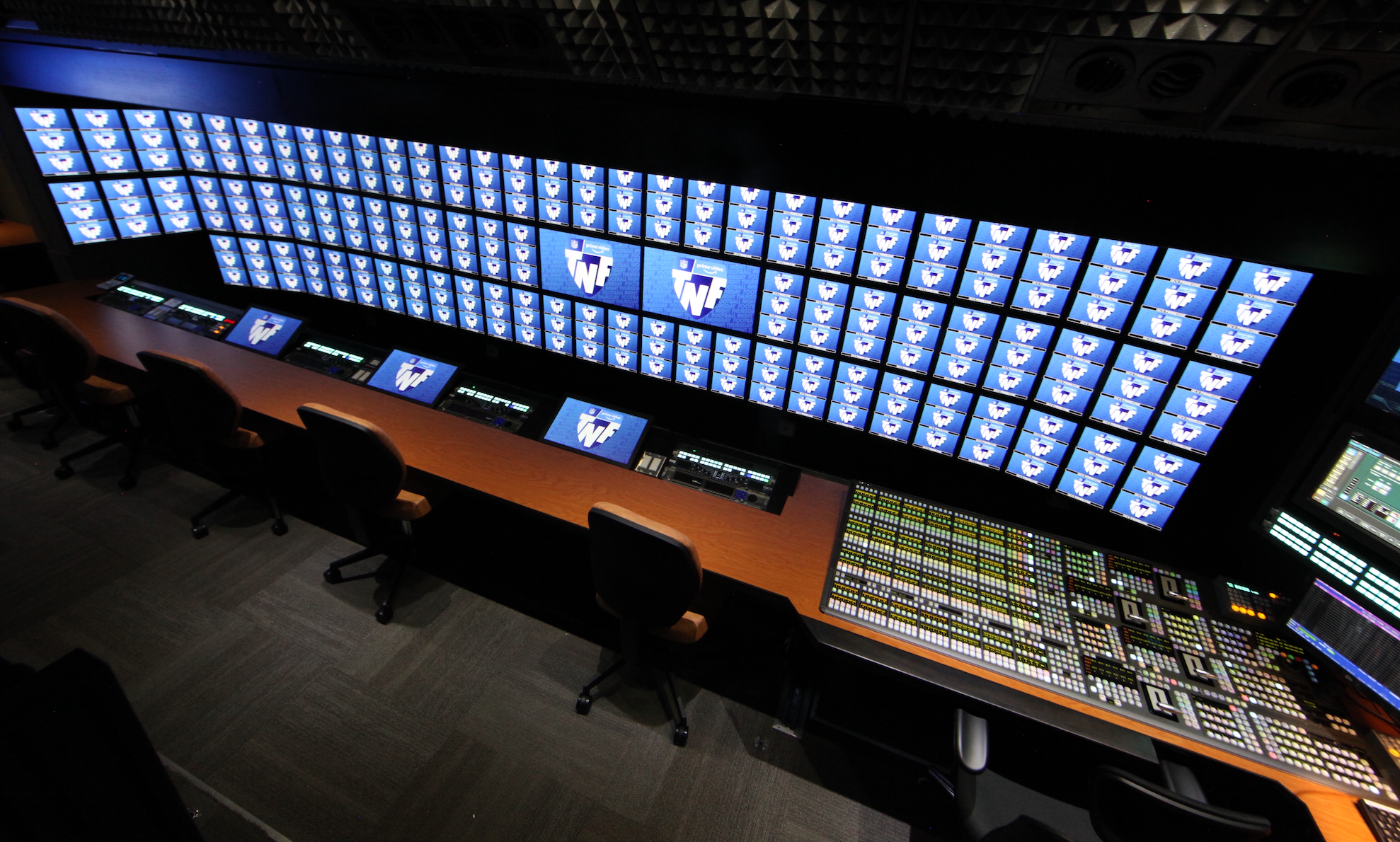 Prime One’s B unit houses the largest production gallery ever in a mobile unit, as well as the largest monitor wall in a truck

Prime One is 4K HDR-ready today (although 2022 games will be produced in 1080p SDR) with top-of-the-line hardware across the board, including a Grass Valley Kayenne K-Frame XP switcher, Calrec Apollo audio consoles, 18 12-channel EVS XT-VIA replay systems, and 20+ Sony HDC-5500 cameras (more than 50 cameras will be deployed). In addition, the Prime One infrastructure offers plenty of extra rack space for future expansion.

The production-control room (PCR) where Executive Producer Fred Gaudelli and Lead Director Pierre Moossa will run the show is unlike any truck-based PCR ever built. Not only is it the largest production gallery in a mobile unit, but it also features the largest monitor wall in a truck (10 three-monitor columns of Boland 32.5 OLED monitors). Also, the PCR has two rows instead of the traditional three, creating more space for the production team, and has significantly more headroom than a traditional truck; Gaudelli often likes to stand and move around the front bench during production.

“Our primary goal with [the layout] was to make everyone feel as comfortable as possible,” says Palmer. “Our production-control room is configured in a way that has never been done before, with things like more headroom, two rows instead of three, and rotating back benches so everyone has line of sight to the monitor wall. Every little detail you could imagine has been taken into account, and, even though it’s a big space, it feels very intimate since you don’t have so many people crammed in.”

A mobile unit like Prime One is no easy build under normal circumstances. Add in an ultra-aggressive timeframe of less than a year (because Amazon took over the TNF rights a year earlier than expected) and constant supply-chain issues, and the immensity of the undertaking is obvious.

“The scale and magnitude of this project is pretty much unprecedented,” notes Palmer, “and we were trying to get it done on a very aggressive timeline as well as dealing with unprecedented supply-chain issues. It’s definitely the wildest build I’ve ever been a part of. We were building a plane while it was already in the air, and we were trying to build it for opening week. That couldn’t have been done without the hard work of our team and our amazing partners.”

Primed for Success: Cutting-Edge Tech Across the Board

Built around a SMPTE ST 2022-7 IP routing core, Prime One is fully redundant in every facet. That redundancy starts with a pair of Evertz EXE 3.0 high-capacity IP routing cores, which are configured in a spine/leaf red/blue architecture across all five trucks. The core is managed by Evertz Magnum software, and all edge routing is handled by the Evertz NATX switch fabric. A separate purple network has been installed to ensure that even ancillary devices on the production are fully redundant and resilient. 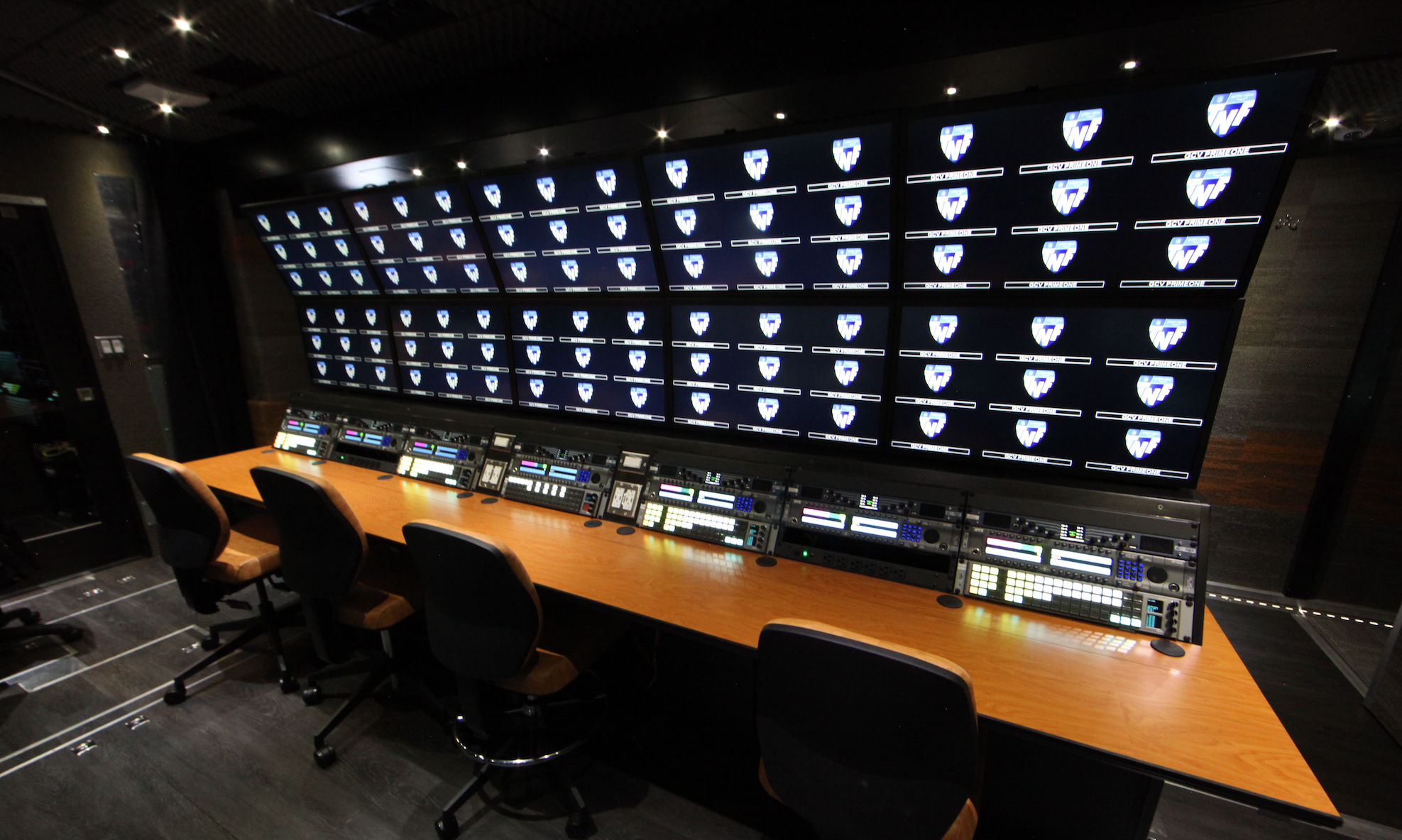 While Prime One rolls out of the gate as one of the most powerful mobile units in history, it also has plenty of room to grow due to the robust IP infrastructure already in place.

“Bullet point number one from [Prime Video] was that everything had to be fully redundant,” explains Jason Taubman, SVP, technology, Game Creek Video. “Amazon paid a great deal of attention to redundancy and wanted to make sure that every possible disaster-recovery scenario was accounted for.”

Prime Two (which gets its DNA from Game Creek’s recent Bravo, Columbia, Gridiron, and Celtic builds) is built around a redundant Arista/Lawo IP routing core for the studio-show productions.

Although Prime One currently rolls with 18 EVS XT VIA replay systems, the fleet has core infrastructure to accommodate more than double that number in the future. Prime One uses XHub-VIA systems to aggregate the 10-Gbps connections from the XT-VIA server into 100-Gbps IP links so the replay system can be integrated with the 100-Gbps routing core. In addition, the Prime One trucks are equipped with EVS IPDirector, XTAccess, XFile, and other features typical of a large EVS environment.

TNF will deploy an army of Sony HDC-5500 broadcast cameras outfitted with Canon UJ122x lenses and linked to HDCU 5500 CCUs connected via IP. All primary game-coverage positions will be Sony HDC-5500’s, except for specialty cameras, such as HDC-4800’s running in 4K, Atom One POVs, C360 Pylon Cams, etc. The Prime trucks will arrive onsite each week with plenty of spare equipment — camera heads, CCUs, lenses — to meet Amazon’s strict redundancy protocols.

“Everything [on the capture side] has to be stellar quality,” says Palmer, “because we are delivering that quality all the way to our customers’ end devices using the lowest compression to create the best picture possible. You will be able to see those details — the blades of grass and the lettering on the ball — like never before. Everything had to be pristine.” 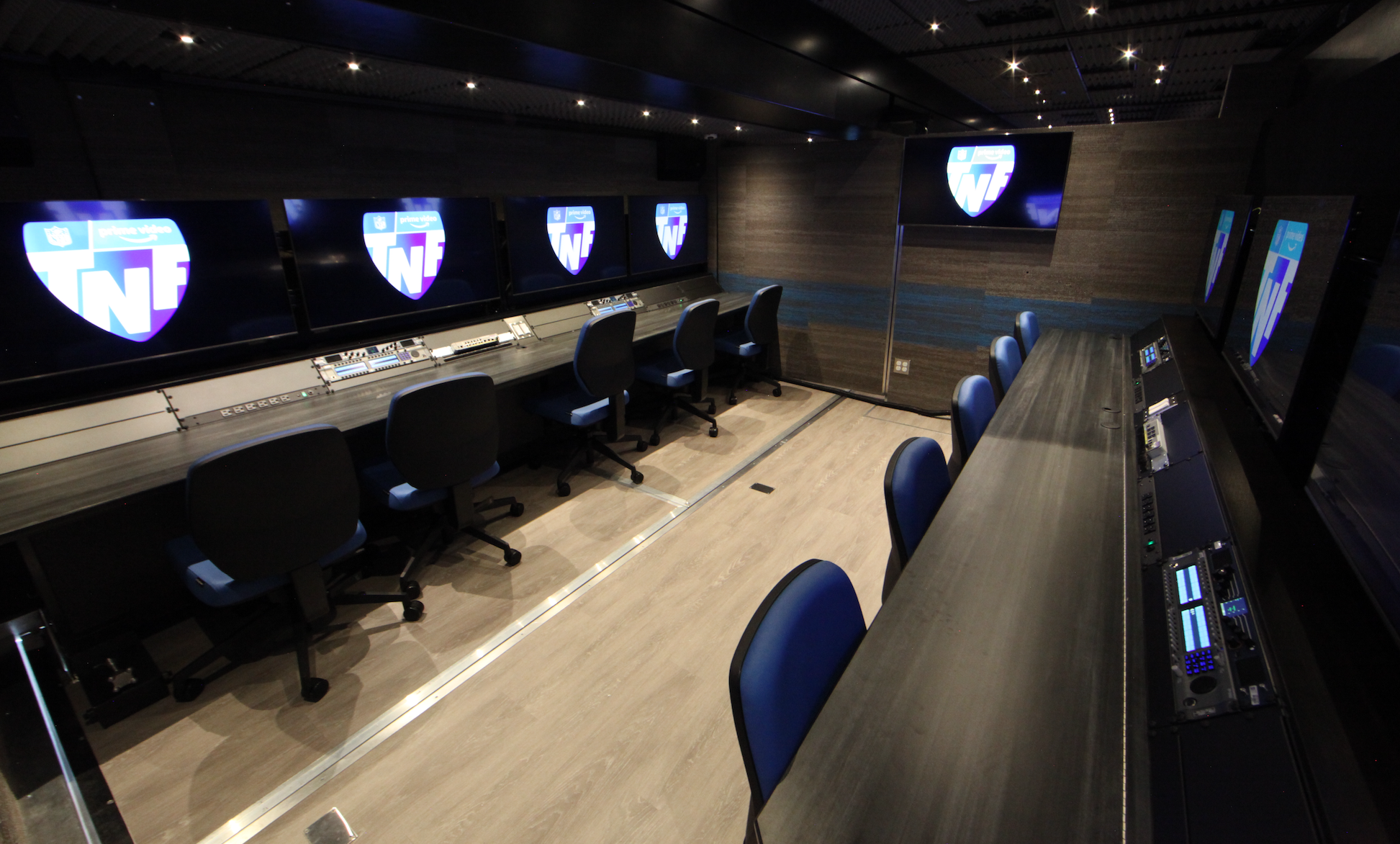 Prime One features several “sandbox” with flexible workstation area for the TNF production team to serve a variety of roles, including replay and graphics.

Communications run on a two-frame RTS 880-port system built on OMI ONMEO matrix interface cards. All external comms to the booth and on the field are connected via Dante, and the TNF crew will be using RTS digital DBP beltpacks, Studio Technologies IFP, and PL beltpacks. In addition, the announce booth is outfitted with Glensound Inferno commentary boxes.

“I think it’s safe to say that this is the biggest and most technologically [advanced] mobile unit we have ever done,” says Taubman. “With a [mobile-unit fleet] of this size and scope, it’s easy to lose track of the fact that everything is being handled at 12 Gbps and is 4K-capable out of the gate, which is pretty amazing. It’s a tribute to our great partners and all the people who gave their time, effort, blood, sweat, and tears to get this done on time.”

Layout and Storage: Plenty of Flexibility Onsite and in the Cloud

In terms of layout, Prime One’s A unit houses the main technology core for the entire fleet, as well as video shading (room for six operators) and two audio rooms (one for the primary mix, the other for the submix). The B unit features the massive PCR, graphics and scorebug operations, and a small engineering core that interconnects with the A unit to distribute audio and video. 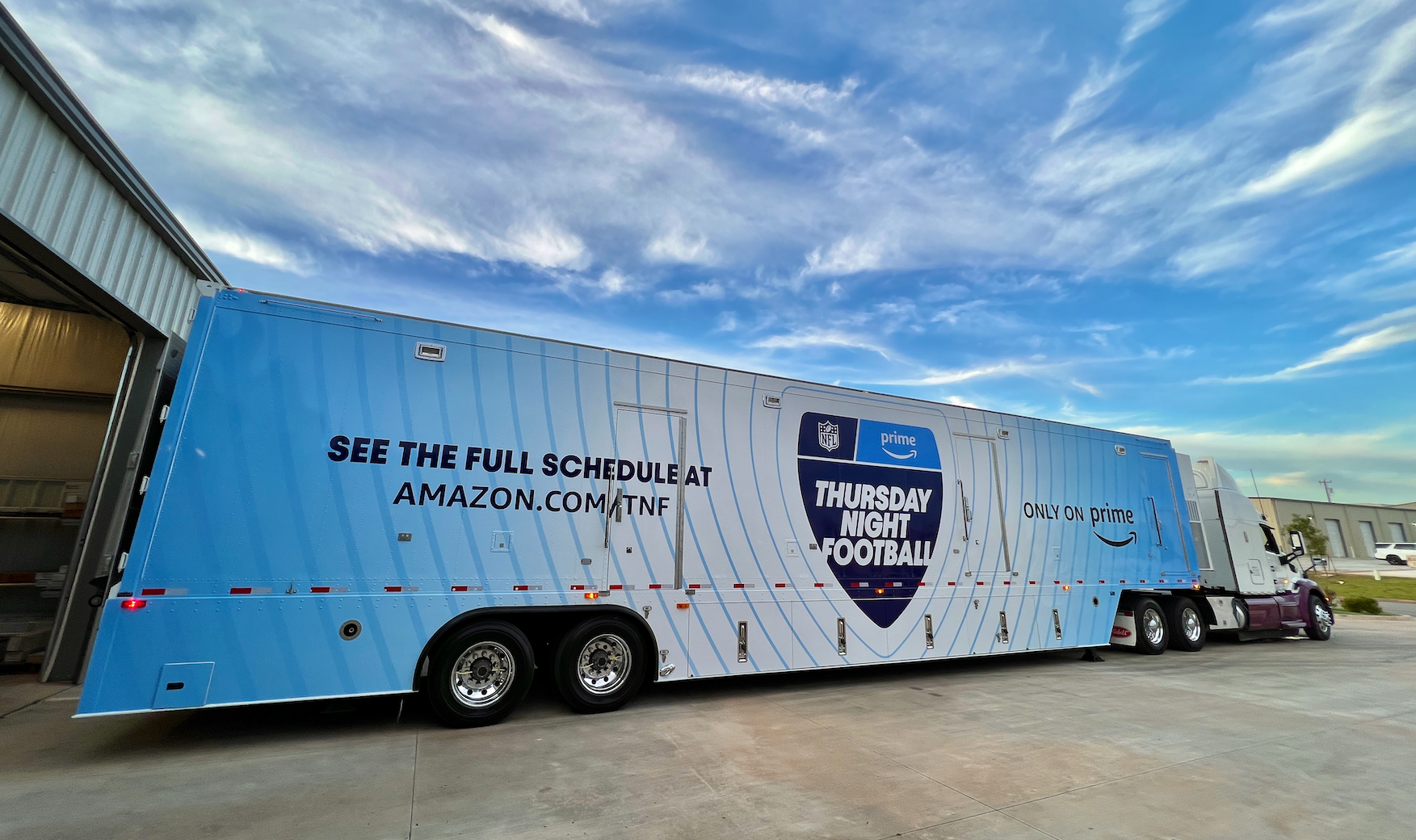 Prime One features five mobile units – A, B, C, D, and E and is joined by Prime Two for the studio show and the Prime Three office trailer.

The C unit is home to a massive replay room and space for a handful of third-party technologies, such as SMT 1st-and-Ten Line graphic. The D unit is a cargo hauler for equipment storage, houses robotic-camera operations, and provides additional engineering rack space for future growth. Game Creek repurposed one of its existing Edit 3 trucks as the E unit, which serves a variety of utilities and provides additional cargo storage for the Prime Video team.

In addition to backing up all media to a Dell EMC Isilon storage system onsite, TNF is sending all 137 record feeds in real time to AWS S3 Cloud Object Storage and is syncing the feeds to NBC Sports Group’s Stamford, CT, broadcast center and Amazon Studios’ edit facility in Los Angeles.

“We are using every possible resource from Amazon to ensure we deliver the best product to fans,” says Palmer. “We are very fortunate to have the full power of AWS behind us, and we’re excited to see what that will enable us to do in the future.”

After a rehearsal game production last month, Prime One, Two, and Three officially debuted for the 49ers-Texans preseason game on Aug. 25. Palmer says that the trucks’ debut went well but he’s fully aware that the rubber will truly hit the road tonight when Prime Video kicks off its first-ever TNF regular-season game at Arrowhead Stadium.

“It was definitely a nerve-wracking experience,” Palmer says of the preseason game. “But it was also very exciting to see all this hard work from all the teams involved culminate with the launch of a property of this scale and magnitude. It has been the biggest highlight of my career for sure, and I’m just so proud of how hard everyone has worked to get this done. Now we’re just excited to get the season kicked off.”