Thursday Night Football Kickoff: Prime Video’s Jared Stacy Says TNF Is Focused More on Being ‘Great’ Than on Being ‘Different’

When the Chargers and Chiefs kick off in Kansas City tonight, it will mark a new era in how fans watch the NFL. Amazon Prime Video’s Thursday Night Football debut will be the first in a 15-week slate of games carried exclusively on a streaming service.

The TNF production team, led by Executive Producer Fred Gaudelli and Lead Director Pierre Moossa, will be working out of a brand-new fleet of Game Creek Video mobile units. In addition, Gaudelli and Moossa will have a robust production arsenal of 50+ cameras (more than 25 of them manned), including robos, dual Skycams (standard and high), an army of 4X and 6X super-slo-mos (on both goal lines and sidelines), RF Steadicams, and C360 Pylon Cams and 3G line-to-gain cameras.

In the booth, the much-hyped duo of Al Michaels and Kirk Herbstreit will make their regular-season debut joined by sideline reporter Kaylee Hartung. The Thursday Night Kickoff studio show, which will also be on the road all 15 weeks this season, will be hosted by Charissa Thompson and feature analysts Tony Gonzalez, Richard Sherman, and Ryan Fitzpatrick, among others. Amazon will also produce alternative TNF streams hosted by viral–sports-sensation Dude Perfect, featuring Hannah Storm and Andrea Kremer, and in Spanish with TNF en Español. 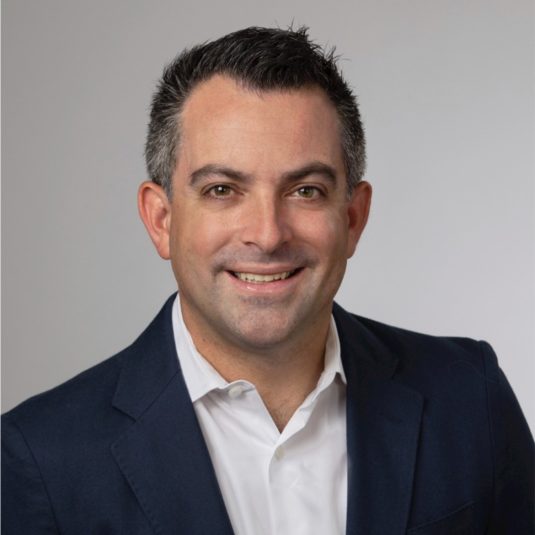 Prime Video’s Jared Stacy: “We’re going to bring in all the [technology] bells and whistles — both from a production perspective and with the Prime Video OTT platform itself.”

SVG sat down with Jared Stacy, director, global live sports production, Prime Video, to discuss TNF’s key production philosophies, how Amazon built a star-studded TNF team in front of and behind the camera, how TNF is focused more on being “great” than on being “different” with its coverage, the support role NBC Sports Group is playing this season, and how he sees TNF evolving throughout its inaugural season.

When Amazon secured the TNF rights and you started to think about what the TNF package would look like, what were some of the key philosophical pillars you put in place?

The most important thing for us from the very start was how we could make Thursday nights special for fans and provide that big-game ritual for fans and families for a long time. That was our north star as we started looking at how we produce the game, how we deliver that game, and who calls that game.

And our leadership from [Prime Video, VP, Global Sports Video,] Maria Donoghue all the way down has been extremely supportive from the beginning. And I have to mention Le An Hinh, [global head of production operations, Prime Video Live Sports, Amazon], who has been an absolute rock star and played a huge role in building out our phenomenal ops team here.

Once you had a vision in place, what were the key moves you made to build the team?

We knew [the producer] was one of the first pieces we needed to put in place. And we were lucky enough to bring in Fred Gaudelli. Fred is not only the best person to ever produce NFL football but also a great leader. We started working with him to build this team together. And we will also have Pierre Moossa, one of the most accomplished directors in the business, sitting next to Fred.

We were able to bring in Al and Kirk, who are both phenomenal and true icons in this business. Then we brought Kaylee over from Good Morning America to offer both a news and a sports background. We know we’re going to be able to produce the game at a very high level in terms of the faces and voices you were going to see in the broadcast. 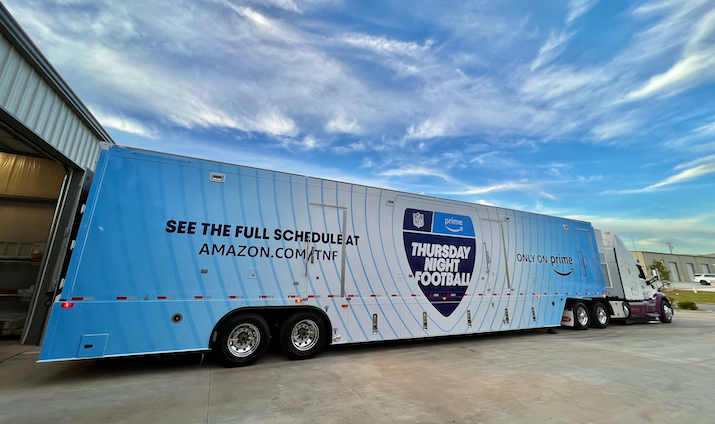 The new Prime One mobile units will serve as home to the Thursday Night Football production this year.

Behind the scenes, you can’t do any of this without an incredible operations team, great technical people, and mobile units that can accommodate a show of our size.

Can you dive a little deeper into the Prime One mobile units and how the trucks are going to serve the sprawling TNF production each week?
That was definitely one of the most daunting things we had to do. [We had to] build a first-of-its-kind mobile unit to put on a massive show like this every Thursday night and do it in less than a year’s time. Our letter of intent with Game Creek Video was on Aug. 21, 2021, and they delivered a state-of-the-art, five-truck facility for the game, another incredible [standalone] unit for the pregame, and an absolutely beautiful office trailer on Aug. 1, 2022 — less than one year later.

It has redundant IP infrastructure that is wired for 44 broadcast cameras. We will deploy more than 50 cameras on the show, with 32 operated cameras and 18 EVS units. It’s 4K HDR-ready, and we’re producing a native 1080p HDR.

On top of that, we have all the bells and whistles: Pylon Cam, Skycam, and everything else you would expect to see on a big show.

For example, Al and Kirk are two legendary broadcasters, but you’ve never heard them work together. We think that is going be unique. We also think the cast of characters we’ve got on the pregame show will be very big differentiator for us.

How are you looking to create a unique pre/postgame and halftime experience with the Thursday Night Kickoff show?
We knew right away that we wanted to take the show on the road every Thursday for 15 cities in 15 weeks. We want the city to feel like a character of the show. We want to showcase local flavor, local fan culture. We’re looking to get closer to the players, closer to the action, and bring the amazing environment at the stadium home to fans every Thursday night.

Once we decided on that, we started looking to hire some analysts for our pregame show that were fresh off the field so they could really connect with the players and the coaches. We’re going have a desk right next to the field and get those great moments of people walking over to be part of the show.

What role has NBC Sports Group played in the development of TNF on Prime Video, and how will its operations and production teams contribute this season?
It’s a partnership in every sense of the word. That starts with Fred, who obviously has a long history at NBC, and their amazing operations team. We have been building up our own operations team. We’re utilizing a lot of the backbone of NBC’s infrastructure at 30 Rock and Stamford for delivering the signal, commercial insertion, and overall master control. From both a creative and operational standpoint, it’s a strong partnership. 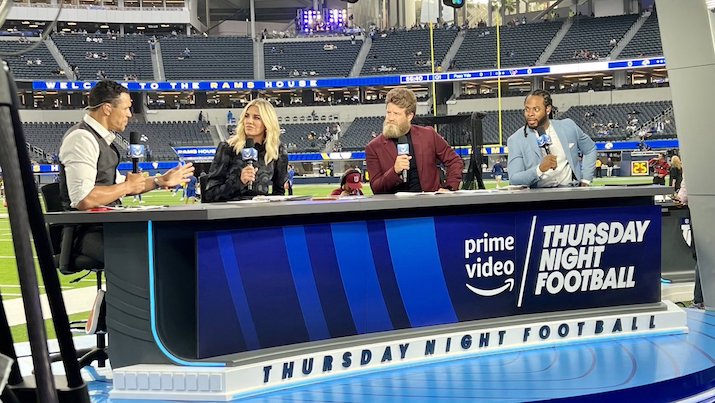 The Thursday Night Kickoff show will be onsite for every game, traveling to 15 cities in 15 weeks.

How did your team go about building an entire graphics package for an entirely new brand like TNF on Prime Video?
We worked with NBC Sports Group and drive|studio to build this graphics package from scratch, and we are happy with the way that turned out. I’m especially proud of the scorebug, which I think really pops. We’re also leaning heavily into AR graphics, and that is going to be a big part of the broadcast. We’ve got some great opening title sequences and animations that are going to add a dramatic element to every game.

We wanted to think big about every single element of the production because, at the end of the day, you want fans to walk away from Thursday night and say, “Wow! that was a really fun night of football.” Obviously, it all starts with the game, but we want the entire experience to feel like something special, and that includes the graphics and [supporting elements].

Speaking of optionality, what is Prime Video’s thinking behind offering alternative-presentation streams for TNF games?
One of the biggest things we want do is grow the game and broaden the tent of who watches it. We are providing alternate streams like TNF With Dude Perfect and lots more to come.

Younger audiences love Dude Perfect, and it’s great family entertainment. While a lot of kids may not want to watch a full game, they’ll watch a game with Dude Perfect just to hang out with those guys for a few hours. That is where we are taking some big swings [in order to] establish who we are and what Thursday Night Football on Prime Video feels like.

How did the first preseason-game production go, and how do you see TNF evolving as the season progresses?
We wanted to be really strong on day one, and, for a first game, we were pleased and know it’s only going to get better.

From an [aesthetic] point of view, the graphics package looks great, and the music from Pinar Toprak is going to be iconic and instantly identifiable with Thursday Night Football. Also, Al and Kirk are already gelling, and, for me as a football fan, hearing them call [that preseason] game was really special, and I know I’m not going to be the only one that feels that way.

What are you most excited for TNF’s first broadcast tonight?
There are plenty of behind-the-scenes things I’m excited about, but, honestly, when I take a step back, I’m most excited to watch [Chiefs and Chargers, respectively, QB] Patrick Mahomes and Justin Herbert just try to break the scoreboard. There’s going to be tons of action just like there is every time these teams meet. We’re going to bring in all the [technology] bells and whistles — both from a production perspective and with the Prime Video OTT platform itself. It’s going to be a really exciting night of football for fans.