This is the club’s newest scoreboard since 2005, newest control room since 2011

In the home stretch of the 2022 MLB regular season, the Toronto Blue Jays are one of three Wild Card teams in the American League. With half of their remaining 12 games to be played at Rogers Centre, the club expects an extra boost of adrenaline not only from the home crowd but also from an in-venue show driven by a brand-new 1080p HDR-capable control room and centerfield videoboard. 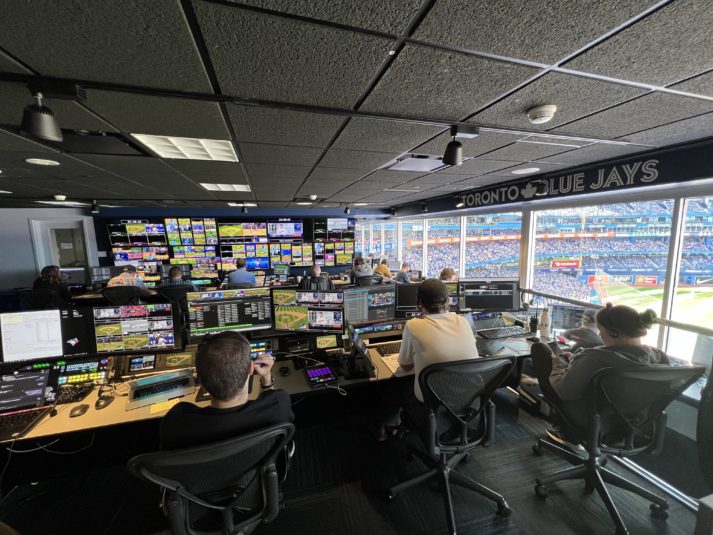 The Toronto Blue Jays have upgraded their control room at Rogers Centre for the first time since 2011.

“I’m really happy with how everything turned out,” says Mike Christiansen, director, technical production and broadcast services, Toronto Blue Jays. “I’m proud of the way that our crew adapted to going from half of an HD frame to this gigantic display.”

The project implementing the franchise’s newest scoreboard in 17 years and the newest control room in more than a decade has been three years in the making. After the contract was awarded to Alpha Video in 2019, the process was brought to a screeching halt in 2020 by the COVID-19 pandemic. And the plan ended up being transformed: originally calling for an IP-centric control room, it transitioned to a 1080p, HDR-capable baseband facility.

During the pandemic upheaval, the organization was in and out of Rogers Centre: in the shortened 2020 season, playing 21 games at TD Ballpark, its Spring Training home, in Dunedin, FL, and, in 2020 and 2021, 49 total games at Sahlen Field, home of the Triple A Buffalo Bison. In the offseason prior to the 2022 season, the Blue Jays and the crew at Alpha Video completed the project to wow fans with a new look in Toronto. 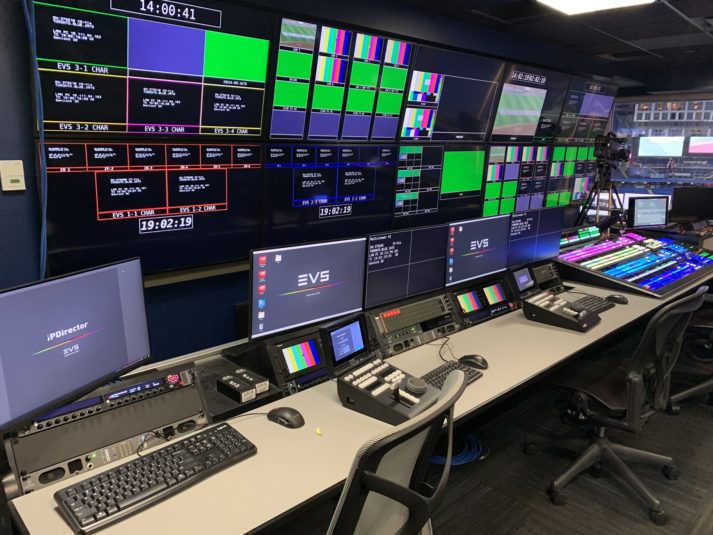 EVS is driving the replays to the new LED displays.

“Our design team worked with [Anthony James Partners Director, Broadcast,] Mike Martin to put together a baseband equivalent to what we had planned on doing in IP,” says Jeff Volk, VP, Alpha Video. “After two years of starts, stops, and multiple redesigns and other things, the goal was to be ready for Opening Day.”

The lockout at the beginning of the regular season brought no new challenges to the project, but Christiansen, Volk, and the rest of the crew working on the control-room integration still needed to overcome the lingering effects of the pandemic. Health and safety restrictions imposed by the Canadian government made it a bit difficult for an American company to go back and forth across the U.S.-Canada border.

To avoid increased supply-chain issues or other delays, Alpha Video partnered with Unity SI — a trusted company located 35 miles north of Rogers Centre in Newmarket, Ontario  — which served as its conduit in Canada. The partnership was fruitful, with the Canadian company helping Alpha fulfill multiple tasks: the heavy lift of revamping the control room, installing the Ross Video XPression-based LED used for the video displays, refurbishing the infrastructure of the new mobile unit docking bay, and upgrading broadcast cabling in numerous positions. 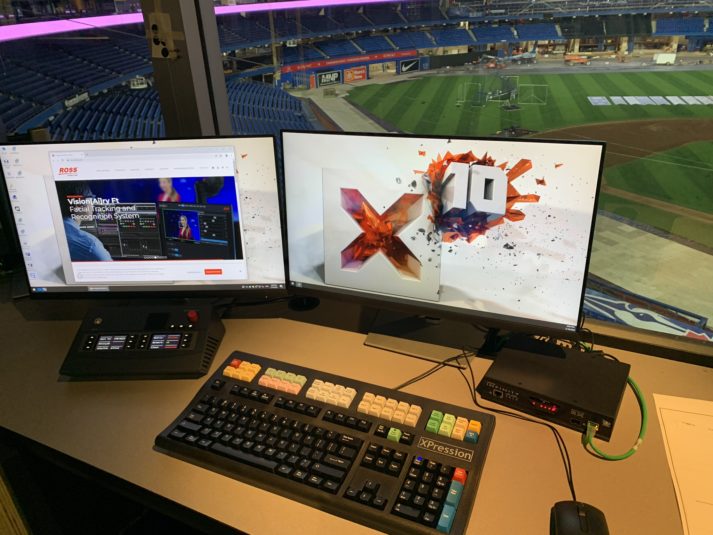 “We leaned heavily on [Unity] to be our boots on the ground,” notes Volk. “I can’t stress enough what a great job [President/CEO] Doug Waldron and the team at Unity did as our partner.”

For Christiansen, it was extremely important to work with a systems integrator that was reliable and committed to the project: “We knew that [COVID-19] might be a challenge, but we went with Alpha based on their work in other control rooms. I think it was important that I had a personal connection with them as well.”

Behind the Scenes: A Peek Into the New Broadcast-Control Room

Heading into this endeavor, Christiansen and his crew of Senior Manager, Technical Production, Christina Gunn and Broadcast Engineer Steph Gagnon were specific on the vendors and products they wanted for this new space. Whether from experience or the need for surefire solutions and services that elevate the game presentation, Volk was more than willing to help bring this equipment to the control room or lower bowl.

“Mike and his team had very strong ideas about who they wanted their partners to be,” he adds. “They wanted Sony as their camera manufacturer. They wanted to continue being EVS users, so they have one of the more advanced EVS replay environments that we’ve installed on the baseband side.” 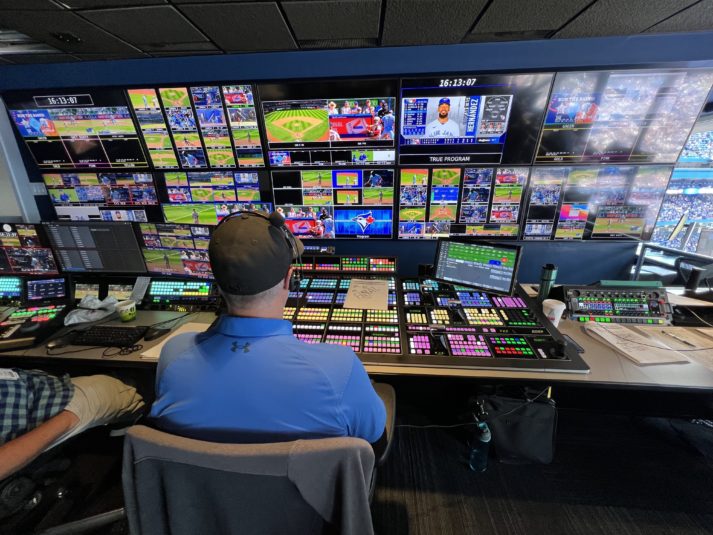 Ross Video’s Acuity production switcher is at the center of in-venue shows.

The show is run with 11 cameras: five Sony HDC-3500’s, five Sony BRC-H800 robos (one for home bullpen, one for away bullpen, one high home, one on the roof, and one in the ress conference room) controlled by Sony’s RM-IP500 PTZ camera remote controller, and a Sony PMW300 with DTC Solo7 Broadcast Nano COFDM Tx and Pro-RX receiver. All cameras are outfitted with various Fujinon lenses.

Fueling the Playoff Push: Enhanced Displays for Fans in Toronto

Baseball fans fully embraced the Blue Jays when they returned to Toronto on July 30, 2021 — 670 days after their previous home game. Since the 2022 home opener, fans have been impressed by the overall experience at the ballpark. From a new lighting system coordinated with the revamped sound system and animations on the videoboard to full displays dedicated to players like closer Jordan Romano, Director, Game Entertainment and Production, Stefanie Wright and her production staff have a new set of tools to work with. 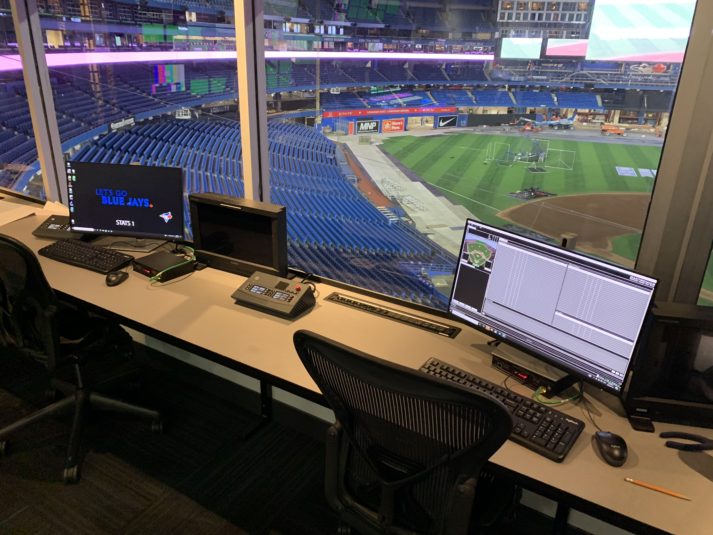 Through a partnership with Daktronics, the 10 new LED displays offer a total real estate of 14,000+ sq. ft., combine for more than 11 million pixels, and come in at 10-mm pixel spacing. The centerpiece is the main videoboard in centerfield. Measuring 49 ft. high by 110.5 ft. wide, the display features variable-content zoning to show one large image or multiple areas of content, including combinations of live video, instant replays, up-to-the-minute statistics and game info, graphics and animations, and sponsorship messages. Surrounding this behemoth are four additional LED displays: two 15.5-ft.-high by 75.5-ft.-wide fixtures next to the bottom of the main screen and two 5- by 75.5-ft. ribbons near the middle.

In addition, Rogers Centre is upping the production with a handful of other video displays: a 3.5-ft.-high by 1,324-ft.-wide ribbon board along the seating fascia with 16-mm pixel spacing, two 6- by 32.5-ft. screens near the foul poles, and two 9.5- by 65-ft. structures along the outfield wall at 10-mm pixel spacing.

“Since we’re constrained by the hotel windows surrounding the display,” says Christiansen, “the whole intent was to do a bigger scoreboard that incorporated all available space in the outfield. With a 10-mm videoboard, we wanted to utilize everything we could and keep our [control-room] technology up to date.”

Getting Up to Speed: Team Navigates Challenges To Adapt to HDR Workflows

The crowds may be ecstatic about the changes, but, for Christiansen and the technicians in the control room, it has been a time filled with challenges. Any production crew making the jump to HDR encounters a steep learning curve to accommodate changes in color, brightness, and other stylistic and technical factors. Adding new equipment to the mix, the crew needed to get accustomed to the new workflows. 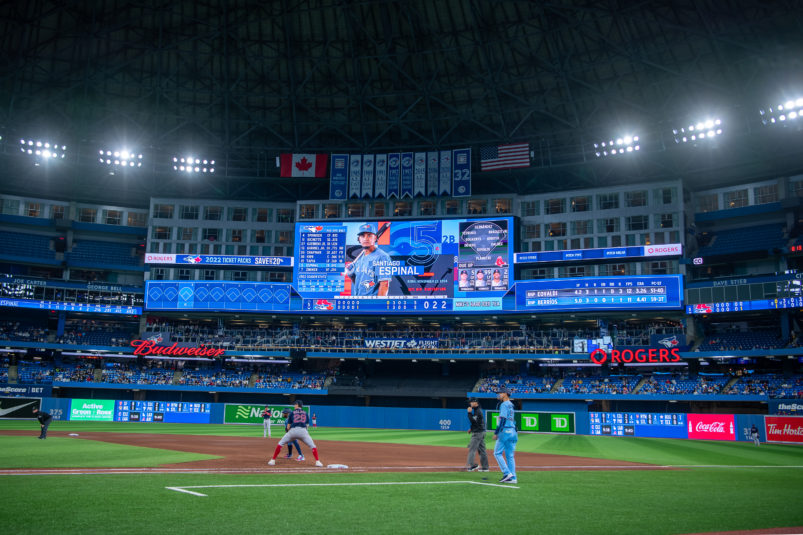 “The hardest part was not doing everything that we‘re used to doing,” says Christiansen. “We promised ourselves that, by the All-Star break, we’d have this ironed out, and we feel like we’re in a good place.”

Ultimately, to ensure that fans would have a pleasurable experience and see visuals the way they were intended to be seen, in-venue shows in 2022 are still in SDR. When the crew is comfortable with the workflow, and other renovations allow it, the show will make the leap to HDR.

“We didn’t want to jump right into [HDR] because we’ve heard about some of the challenges in matching colors,” he says. “We’re doing a lot of testing with different cameras and different ways that our content team is shooting footage. We also have great support from our partners to help with any issues.”

Christiansen has been a club employee for two decades: control room operator, 2002-04; technical producer, 2005-08; manager, technical production and broadcast services, 2009-18; and his current role since 2018. In that time, he has seen how technologies constantly change and has become an integral part of the club’s technological decision-making. As the tech pushes toward the next era of game-day production and in-venue entertainment, the show will continue to improve. 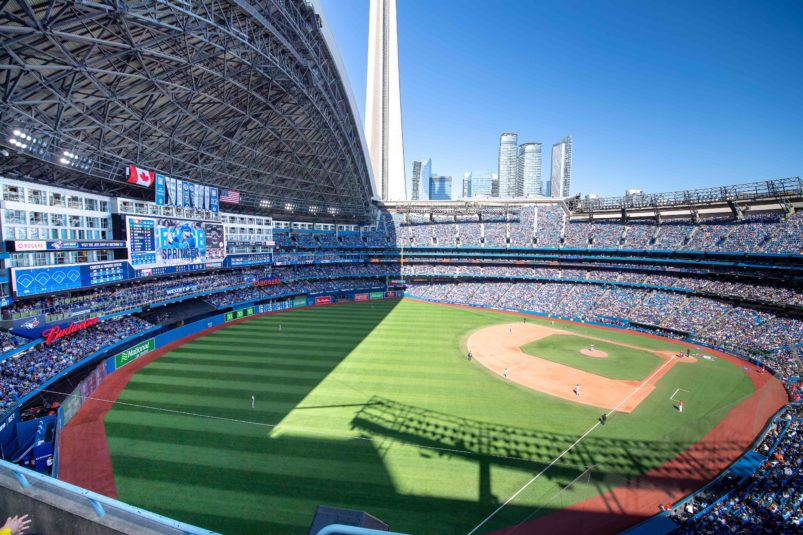 All 10 LED displays are visible at Roger Centre during Blue Jays–Yankees on June 18, 2022.

“Every year, there’s more and more,” says Christiansen. “We’re embarking on a multiyear renovation this offseason as well. We’re moving forward to make an older building as good for the fans as we can.”