HRP Live co-founders Charlie Dube and Mike “Rothy” Roth had worked for the CrossFit broadcast team for years. When management decided it wanted to change direction and hire an outside company to produce broadcasts of its events, the two created HRP Live. In almost two years, the new company has successfully produced several CrossFit broadcasts. 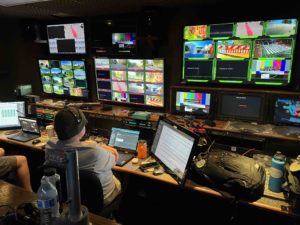 “What differentiates us from most production companies is our standing in the fitness space,” explains Roth, who directed all the individual competitions for the broadcast. “We’ve essentially invented how you cover the sport, and that’s been really helpful to us.”

For the CrossFit Games, HRP Live managed six NEP mobile units and a crew of about 250 people, including 17 announcers. The company was responsible for coverage of the competition for CrossFit’s live streams, as well as a two-hour live broadcast on CBS.

“All of our RF came from CP Communications,” says Roth. “The field of play is not just one or two fields of play – every inch of the Alliant Energy Center is in play, so we needed somebody who could be flexible. They also provided a bunch of bonded cellular work as well, because we had events that were downtown.”

Most of the CrossFit Games were staged at the Alliant Energy Center’s indoor Coliseum and outdoor North Park Stadium. This year’s off-site activities included an event at the University of Wisconsin pool and another that required coverage from the stadium to the Wisconsin State Capitol in Madison, which is more than three miles away from the stadium. That event coverage used 32 cameras, including two drones. 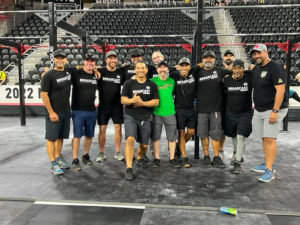 “We went from the stadium at North Park, which is where the athletes started and where we have standard RF,” recalls Roth. “Then they left the campus and we switched to bonded cellular. It was a testament to a lot of people – CP chief among them – to make that work in real time when a bunch of people decide to go live on Instagram at the same time and your bandwidth gets cut in half.”

CP Communications, which maintained a crew of 12-15 people during the production, also handled all off-site communications and field reporter RF using a Unity intercom system. “When you’re talking to people miles away, things can go bad. None of this works if you can’t talk to your people out there,” says Roth. “And to be able to talk to everybody in real time, which the Unity system allowed us to do, was spectacular.” 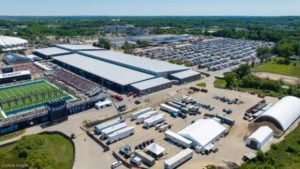 Originally, the CrossFit Games coverage was limited to two streams, but a deal late in the process added more streams for international audiences and CP’s subsidiary, Red House Streaming, provided the encoding and distribution.

“We ran a lot of that through CP and RHS, where they were the last step out the door,” explains Roth. “I think CP and Red House Streaming will be more heavily involved in our transmission and distribution down the road, because I think there’s going to be more and more of it – and they’re well set up for handling multiple streams to multiple places.

“We’re trying to build a company, and you want partners you can rely on. CP Communications and Red House Streaming has the flexibility to do a lot of different things,” adds Roth. “No matter how big or how small we need to do something, they’re capable of doing that.”