“Gaming on campus is no longer something that just exists as a hobby. Today, universities value esports programs as recruiting tools, enhancing student life on campus and creating post-graduate career paths,” says Angela Bernhard Thomas, EVP of ESPORTSU at CSMG. “Similar to the Collegiate Esports Commissioner’s Cup we held earlier in the year, this show will bring competitive talent to the forefront on a global platform, and feature the fast changing landscape of collegiate esports. This pioneering show is reminiscent of an important moment in time when ESPN brought traditional sports into homes across the country more than 40 years ago.” 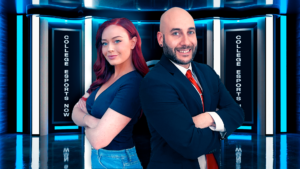 “As the collegiate space continues to expand, brands look for consistent, high quality programming to align with,” says Eric S. Yoon, Founder and CEO of ESTV. “College Esports Now provides a perfect starting point for both endemic and non-endemic brands to ease into a space that resembles traditional sports programming.”

“We’re excited to showcase our outstanding community of collegiate players that compete with us in the NECC,” says Jacob VanRyn, Commissioner of the NECC. “We’re excited to be a part of College Esports Now so that we can continue to tell the stories of the schools, the programs, and most importantly, the players.”

College Esports Now will highlight various collegiate esports programs on all levels, its teams, the origin stories of different players and their journey throughout their career. Additionally, the show will feature a special segment with former NFL players, Ahman Green, Shane Vereen and Brock Vereen alongside professional esports players. The show will compile the largest aggregation of stats and rankings across regular season play from multiple conferences.

“This show is the culmination of years of preparation and planning in anticipation of the perfect timing for its release,” says David Chen, of NACL. “The best-in-class producers of this program will bring collegiate esports to life with high-end broadcast graphics, top-tier talent, celebrity guest segments and world class brands.”