Immersive audio for broadcast sports is already far along in the process of establishing itself as a standard. Dolby Atmos has been used on-air in proof-of-concept stages since 2016, with a growing number of events sending it out for regular broadcast, including the 2022 Beijing Winter Olympics, Premier League, Super Bowl LVI, and, most recently, US Open tennis.

However, immersive sound has also been making inroads into entertainment venues — theaters, performing arts centers — for theatrical performances and music concerts. New and updated venues like Resorts World and Park MGM in Las Vegas, the Beacon Theater in New York, and Broadway musicals have permanently installed so-called spatial sound systems, including Atmos, in the past two years.

Can sports stadiums and arenas be far behind?

Memphis’s 18,000-seat FedEx Forum may be the first to take that step. In July, Germany-based sound system developer d&b audiotechnik installed its immersive Soundscape system in the arena, home to the NBA Grizzlies and the University of Memphis’s NCAA Division I men’s basketball program. A temporary installation used for a non–sports-related event, the system served as a demo of a potential replacement for the venue’s nearly 20-year-old sound system. Several interested parties — among them consultants and integrators in the sports sector — were able to listen to how immersive sound could work in an acoustically challenging environment like a sports arena. NDAs prohibit disclosure of who was there and any outcomes, according to Steve Seable, business development manager, d&b audiotechnik, but the event was positive. 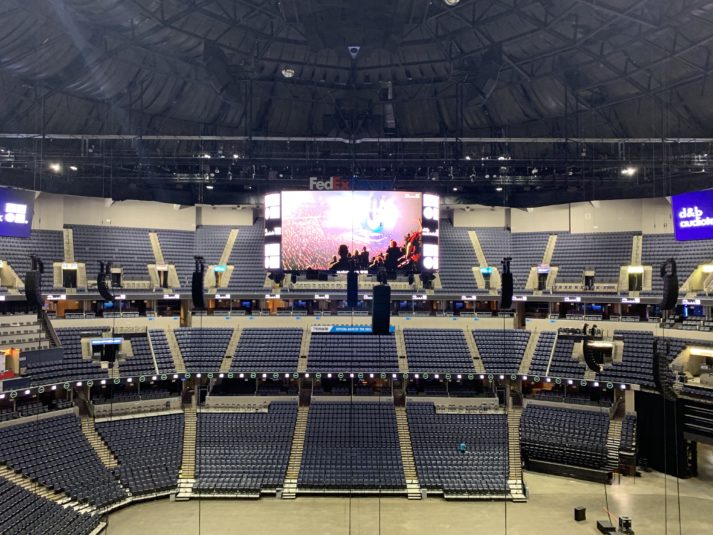 “We had a vocalist in to sing the national anthem, and she began singing without an introduction or a spotlight,” he explains, “but everyone instantly knew where to look to see her, midway on the short end of the court behind the hoop. The sound is that localized.”

Although immersive sound in cinema and television has taken the lead in the burgeoning sector, Seable says, its practical application in venues has depended on development of technology to manage it. Specifically, DSP had to reach a point where it could manage dozens of individual point sources and a matrix of delay speakers as a coherent single entity.

“The technology for moving [live] sound objects around a matrix like that and keeping them all perfectly time-aligned didn’t exist until four or five years ago,” he says, referring to d&b’s DS100 signal processor and R1 remote-control software, which handle those tasks for Soundscape.

Even with the most difficult processing challenges being addressed, sports venues will likely have to develop and evolve content to accommodate an immersive environment.

“Most venue audio, such as sound effects and even music, is mono or at most stereo,” says Seable. “You need multitrack audio stems to best take advantage of immersive.”

Gino Pellicano, application project manager, L-Acoustics, whose L-ISA immersive sound system is in theaters and on concert tours, is generally sanguine about immersive’s prospects in venues, but he wonders if, at least initially, immersive live sound in sports venues might best be reserved for special sections instead of the entire bowl. 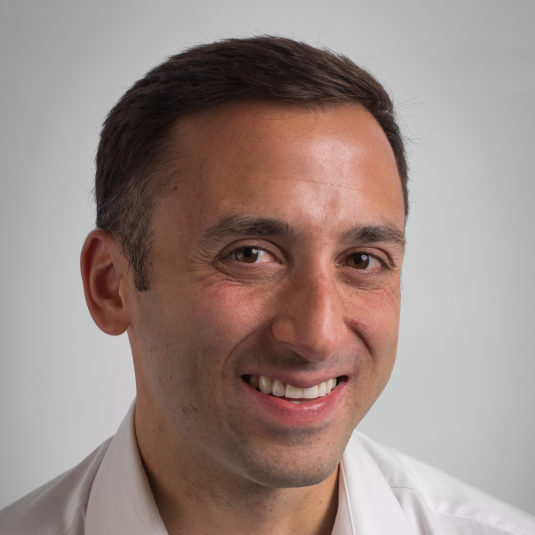 L-Acoustic’s Gino Pellicano: “You want to think carefully about how you might deliver an experience [fans] can’t get at home.”

“Arena-sound reinforcement is inherently challenging given the large volumes, hard surfaces, and corresponding long reverberation times,” he says. “Achieving acceptable speech intelligibility and preserving the impact and fidelity of music playback is a challenge under the best conditions. When you add that sports venues generally have audiences that surround the action on a field or court, adding immersive elements becomes very challenging. You need to consider what impact adding more speakers and sounds into these venues will have on the experience.”

Immersive sound, Pellicano adds, can also be looked at as a pure effects proposition: moving live and prerecorded sound effects around a venue as a means of fan engagement. He also suggests the potential for immersive via hybrid solutions, such as the one offered by Mixhalo, a wireless-networking technology that can deliver high-resolution audio in real time to attendees’ mobile devices at events. (L-Acoustics acquired an equity stake in the company last year.)

Ultimately, he says, immersive audio is feasible in sports venues, but it should be implemented and managed in a thoughtful way that is more than just having music/effects coming from all around the venue all the time.

“You want to think carefully about how you might deliver an experience they can’t get at home,” Pellicano contends. “Having smaller premium experiences in suites, coupled with subtly placed effects throughout the game/match, could elevate the experience, making it unique without becoming too fatiguing or gimmicky.”

Major systems integrators, which have been building much of the new loudspeaker-and-processing infrastructure for immersive broadcast audio, are also watching the sports-venue market develop. Diversified — whose sports-venue portfolio includes SoFi Stadium, Met Life Stadium, and Wells Fargo Center — obliquely entered the field in 2020 with the installation of a separate, parallel PA system in the Texas Rangers’ Globe Life Field in March 2020, part of a larger audio infrastructure that included 2,000 loudspeakers, 200 amplifiers, and roughly 10 miles of audio cabling. The combination JBL VerTec/QSC Q-SYS processor player subsystem was designed to manage and distribute 360 degrees of SFX, such as the sound of horses’ hooves thundering around the venue.

“It was a traditional mono sound system,” says Justo Gutierrez, director, engineering media, Diversified, “but it was completely designed for localization of specific sounds. It’s more challenging to do this in an open-air stadium, but what it can do is bring the sound of the game closer to the people in the stands.”

Satisfying those fans may be key to immersive sound’s penetration of the sports-venue market. Diversified CEO Eric Hutto points out that sports fans can stay home and be wowed by Atmos in their living rooms; live immersive sound can be one of the novelties that prompts them to come to the venue.

“What can be done with LED in the venue helps do that,” he says. “If we can match that LED-type experience when it comes to sound, the team or the facility manager is more likely to make the investment because broadcast sound is raising everyone’s expectations of what sports should sound like anywhere.”

In fact, manufacturers agree, immersive sound could help synergize audio with the ever-larger video displays in venues, providing audio cues to let fans in the stands know where to look during games.

“In a typical mono sound system, the sound comes from whatever speaker is nearest to a particular seat,” Seable notes. “Immersive sound can be focused wherever it needs to be. It works with venue video instead of alongside it.”

That sonic experience can have multiple facets, some of which could be highly practical. For instance, Diversified SVP, Media, Duane Yoslov points out how Meyer Labs’ Constellation system, which can perform some immersive functionality but is used primarily to transform venue acoustical responses, can help a stadium or arena better accommodate music concerts and other arts performances. But it can also zone the sound so that, for instance during a college basketball game, the noise from the visitors’ seating might be somewhat attenuated while the home team hears plenty from their side.

The higher costs of immersive systems factor into their uptake in sports, as do operational considerations: mixing immersive’s objects requires new skills and processing versus mixing conventional audio channels.

But costs are coming down, driven in part by accelerating acceptance in theater and house-of-worship verticals. And other dynamics are in place: immersive may already be experiencing an extension of the “rider-ready” phenomenon, in which venues make technology choices based on demands in touring shows’ contract riders. It’s no coincidence that two of the leading brands of conventional PA systems called for, L-Acoustics and d&b, are also heavily invested in immersive live sound.

“Choosing [PA] brands has become a defensive move, as well as an offensive one, to make sure your venue is more attractive than another in a market,” says Hutto. “That may become the case for implementing immersive sound, too.”

Both the manufacturers of immersive live-sound systems and those who install them are optimistic about the potential for the technology to become part of the future of venue sound.

Seable is confident that immersive sound in the sports venue could start to become a reality as soon as next year. “After our time in FedEx Forum, we saw a lot of interest in leaving the mono PA behind. We are working on several system designs right now. The only question is, who will be the first?”