When the 2022 ESPN NBA preseason schedule tips off this Thursday, Oct. 6, ESPN will unveil a new, global creative brand identity for NBA for its NBA coverage across all screens and platforms. ESPN Creative Studio developed a revitalized brand identity for NBA on ESPN that showcases an artfully crafted future-forward animation and editorial look and sound. From the iridescent chrome brush strokes that are painted across the entire design campaign to the slick animations, the overall look pays homage to the swagger and personality of the NBA.

The new creative brand identity also includes WNBA and G-League, making it the first time the collection of NBA brands will feature a cohesive look across properties.

The new creative brand identity, animation and music debuts this Thursday beginning with NBA Today at 3 p.m. ET, followed by NBA Countdown at 7p ET, and the doubleheader featuring Brooklyn Nets v Miami Heat at 7:30 p.m. and Los Angeles Lakers v Minnesota Timberwolves at 10 p.m. Throughout the season, the new branding will further come to life with innovative augmented reality enhancements that will be showcased across ESPN’s Primetime and Playoff programming, culminating  ABC’s exclusive coverage of The NBA Finals which will feature a new signature style. 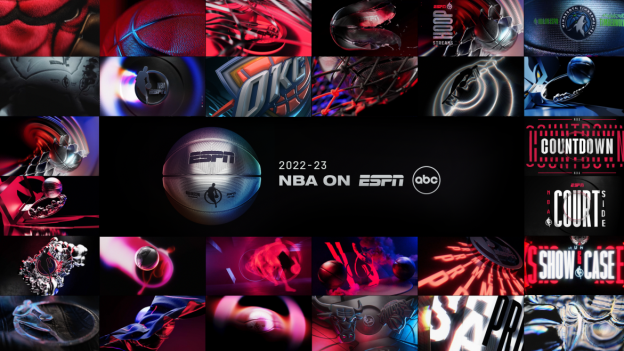 “Leading creative initiatives like this one are exactly what we envisioned when we created ESPN’s groundbreaking in-house Creative Studio almost two years ago,” said Carrie Brzezinski-Hsu, Vice President, ESPN Creative Studio. “We take sports from game to experience. It takes a dynamic collective of creative capabilities and storytellers to make fans feel like they are part of the game.”

“Like everything involving the NBA on ESPN, this has been a total team effort,” said Tim Corrigan, Vice President, Production. “We were thrilled to collaborate with our ESPN Creative Studio group to bring this new look and feel to life. It’s big, bold and contemporary and we can’t wait for fans to see it.”

In the creative, viewers will see the NBA and WNBA’s iconic “logoman” and “logowoman” in a way they’ve never seen before, as the league logos animate on-screen with cross-over dribbles and no-look passes in dynamic fashion. The creative treatment was inspired by the thrill of sitting courtside and the energetic motion of the game. A basketball-centric spherical theme reverberates throughout the new identity.

The team created a unique plethora of assets that provides ESPN Creative Studio and NBA production teams the flexibility to create team-specific versions while also allowing them to continue to build new elements that will ensure the longevity of the new look.

On the Music, ESPN Creative Studio partnered with Made Music Studios to create the next evolution of the ESPN on NBA sound.  The strategy was to find a theme that would complement the energy of the young stars across the NBA and the new package look for NBA on ESPN.  Made Music created a hip hop-based concept with the power and energy synonymous with ESPN’s NBA Productions.

ESPN Creative Studio collaborated with FutureDeluxe and Two Fresh on the campaign.