Compact and busy, the pit area poses a particular challenge

Getting close to the action is the goal of nearly every production team. For NHRA, the pit area has always topped the wish list. The challenge has been that the nature of the NHRA pit area, given its location and the amount of activity, doesn’t leave a lot of room for a camera operator. Enter the Sony BRC-X400 PTZ camera, which can be easily moved from pit to pit as desired.

“Our pits are compact, and you have as many as 25 cars for Top Fuel, 25 for Funny Car, 25 in Pro Stock, and then 25 Pro Stock motorcycles,” says Rob Hedrick, senior director, production, NHRA. “We can’t run fiber to all of those pits. We started experimenting with Unified hardware to put up an LTU antenna originally designed for rural ISPs.”

The antenna, coupled with an LTU subscriber antenna facing the top of the stadium, allows the VLAN traffic to be passed over the network.

“Then,” Hedrick explains, “it’s just tagging out the VLAN for the PTZ network in the pit, plug the Sony camera into that, and, over PoE [Power over Ethernet], it powers the camera and takes the PTZ network back to the compound. There, the Sony RM-IP500 PTZ remote controller controls the camera, and we have a decoder to turn the RTSP stream into SDI so we can get it into the truck. We get full bandwidth and full control of the camera wirelessly from the pit.”

Currently, only one Sony PTZ camera is deployed in the pits, but four units are expected to be in the mix for next season.

“That will give us one in each of the categories: Pro Stock, Pro Stock motorcycle, Funny Car, and Top Fuel,” he says. “It can move around based on how people qualify.”

He adds that pit coverage goes straight to EVS so that the operators can re-cue it when they’re doing thrash or when the cars are leaving or coming into the pits. “We recently had a good look at one of our events where the Tony Schumacher team was having trouble getting the car fixed between rounds. We had the PTZ camera, a drone, and a helicopter shot all working in tandem.” 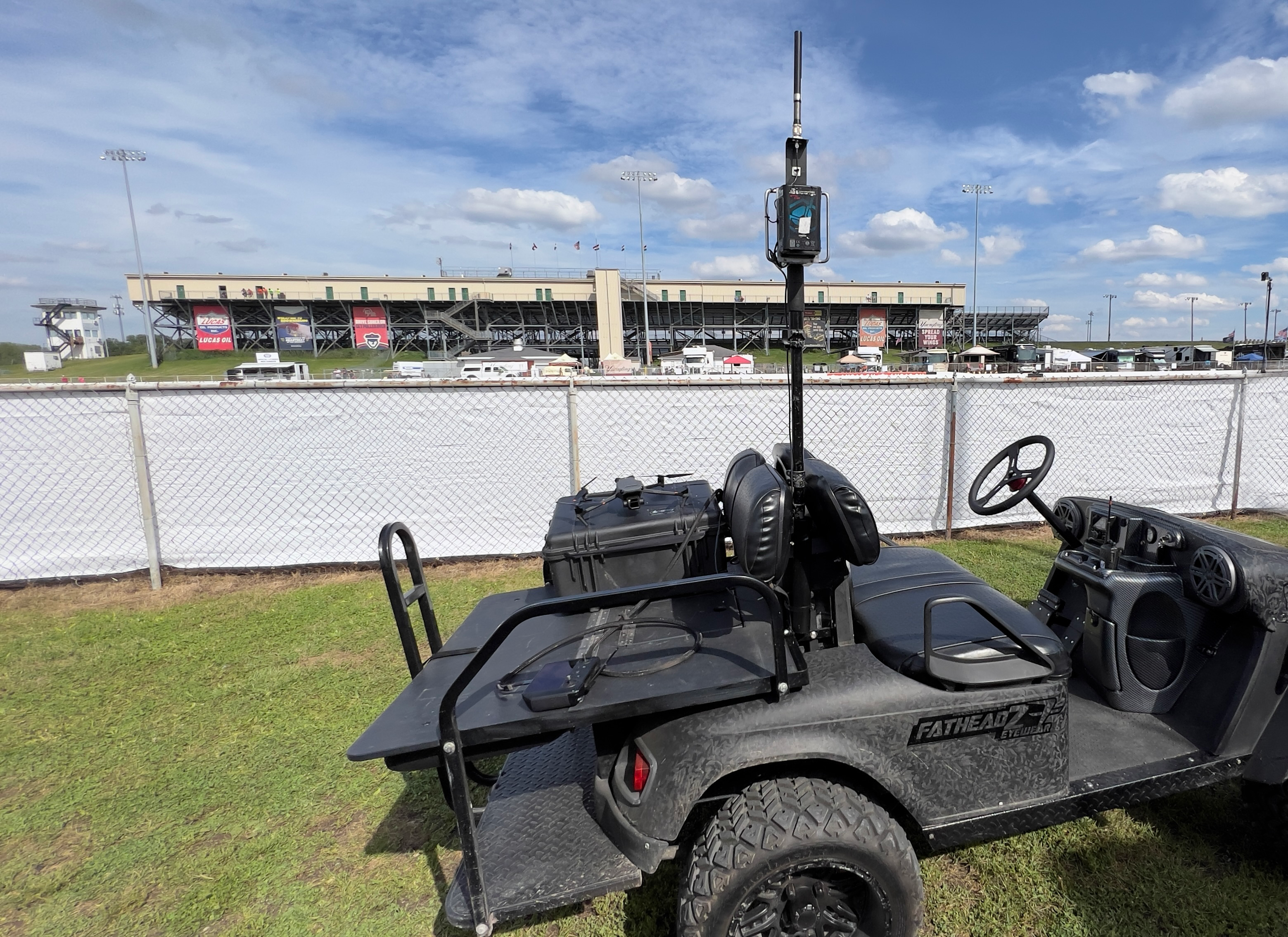 A “drone cart” allows NHRA’s drone operator to keep line of sight with the drone and also quickly get around a racing compound and complex.

NHRA is using a DJI Mavic 3 drone, which is controlled by a new controller and operated by a drone pilot working out of what Hedrick calls a “golf pointer cart.”

“We put the 3G golf pointer in the cart with the pilot Tom Stout,” he says. “He’s flying it sitting in the passenger seat with his controller and [is driven] through the pit chasing cars. It’s like we made our own flying ‘Russian Arm’ camera system.”

The additions, coupled with NFL lead-ins on Fox, have helped give a bump to ratings, which hit 2.8 million and averaged 1.67 million the weekend of Sept. 17, the highest to date (and up 10% over last year’s record).

“We’re back to normal at the track,” says Hedrick, “but it feels really good this year, and the tracks are packed.”

“Game Creek is a great partner and right on top of things,” says Hedrick. “If we have any new ideas or technical issues, their team and engineers are perfect for when we come up with a crazy idea and need to figure out how to get it on the network.”