If you’ve had your ear tuned for the music being played in MLB stadiums lately, you may have noticed this postseason batters’ walk-on music that suggests baseball may be giving basketball a run for the LFE (low-frequency–energy) title. The result is deployment of dedicated sound systems to handle music that is much more muscular, particularly on the low end.

As enumerated by Billboard, ballplayers’ artist choices have skewed heavily toward hip-hop and other urban genres, with an unmistakable Latinx tilt. For instance, Bad Bunny tracks like “Despues de la Playa” and “25/8” are the choices for the New York Yankees’ Gleyber Torres and the Cleveland Guardians’ Gabriel Arias, respectively.

Kanye West’s “Slow Jamz” is preferred by the Houston Astros’ Trey Mancini, and Alec Bohm of the Philadelphia Phillies opts for Ye’s “Famous.” 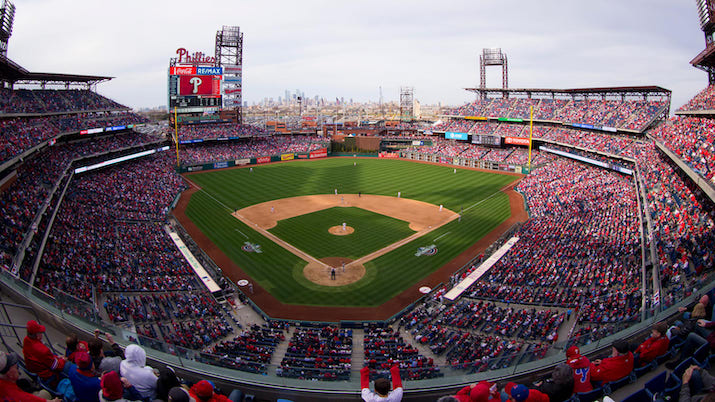 Drake, who topped Billboard’s 2015 list, is the choice for the Atlanta Braves’ power-hitting Matt Olson with 2012’s “Pound Cake/Paris Morton Music 2,” on which Jay-Z joins in.

But there’s plenty to rock out to as well. Spencer Strider of the Atlanta Braves strolls on to the thump of Led Zeppelin’s “Bring It on Home,” and Luke Maile of the Guardians goes for the slow build of Zep’s “Kashmir.”

Georgia-born Gunna and Puerto Rican rappers Anuel AA and Daddy Yankee (no relation to the Bronx Bombers) also figure heavily into a playlist that reflects how sports has been tracking music and the culture at large when it comes to genres. America’s putative pastime has long been a haven for Hispanic ballplayers, who make up nearly 32% of team members. Even though Black players are just 7.7% of the baseball roster, black-oriented walk-up music has come to dominate the playlists, a reflection of hip-hop’s recent ascendance of music charts and culture in general. And the presence of artists like Gunna and the ubiquitous Bad Bunny — would Flamin’ Hot Cheetos and Corona Extra even exist without him? —further reinforces the importance of Latinx influences.

Collectively, it’s bringing a new bottom to baseball sound in the bowl.

According to Justo Gutierrez, director, engineering, media, sports and live events, Diversified, which has designed and installed sound systems for dozens of sports venues, baseball PA systems have historically been just that — public-address systems designed for announcements, sound effects, and background and incidental (i.e. organ) music — and haven’t had much need for subwoofers. However, he says, in recent years, requests for new systems with subs and the addition of subs to existing systems have increased steadily.

That’s certainly part of the overall shift in sports toward both more music in general and more urban-music genres requiring effective LFE reproduction. But it’s also an outgrowth of the walk-up music phenomenon, Gutierrez believes.

“Just in the last year or two,” he says, “we’ve been getting requests to design and install dedicated walk-up systems that cover the area from the dugout to home plate and can reach the pitcher’s mound. Batters are asking for aggressive, high-volume, high-impact music as they approach the plate, and the same for relief pitchers and closers when they come in from the bullpen.”

Diversified has installed three such dedicated walk-up–music systems in that time. At the Philadelphia Phillies’ Citizens Bank Park, for example, a JBL CBT-1000 loudspeaker pumps up approaching batters with music of their choice focused directly on them.

That coverage is important. The dedicated walk-up systems are a subsystem of the main PA and mixed through an aux output on the audio console by the DJ managing the music for the rest of the park. It has to be carefully managed and delay-timed to avoid conflicting with music and other sound elements in the larger PA system. It also has to operate in a mix-minus mode: announcement information such as a batter’s name is left out, leaving the walk-up system with only the music as its sole content.

That need for highly specific area coverage also means that walk-up systems have to be designed uniquely for each stadium. At Citizens Bank Park, a rotating sign behind home plate offered a practical perch for the single walk-up speaker, but, Gutierrez points out, each ballpark is architecturally unique, and anything that edges onto the field of play becomes subject to its ground rules. (The Phillies’ sign is specified in the stadium’s posted ground rules, and, by extension, so is the walk-up system.)

“It’s all a matter of what real estate we can use in each stadium,” he says. “We can find the right full-range speaker to make an impactful walk-up system; the challenge is where to put it.”

The MLB walk-up sound system seems poised to become the must-have item for baseball teams for the near future.

Diversified has already been getting inquiries about building them for several teams during the off-season, Gutierrez says: “It’s definitely a trend at his point.”