With the 2022 Men’s FIFA World Cup just around the corner, the sports world can’t get enough of the game of soccer. ESPN is enhancing its coverage of La Liga, the highest tier in the Spanish soccer pyramid, by producing studio shows and commentary from Spain during a 10-day stretch dubbed “ESPAÑA Week.” 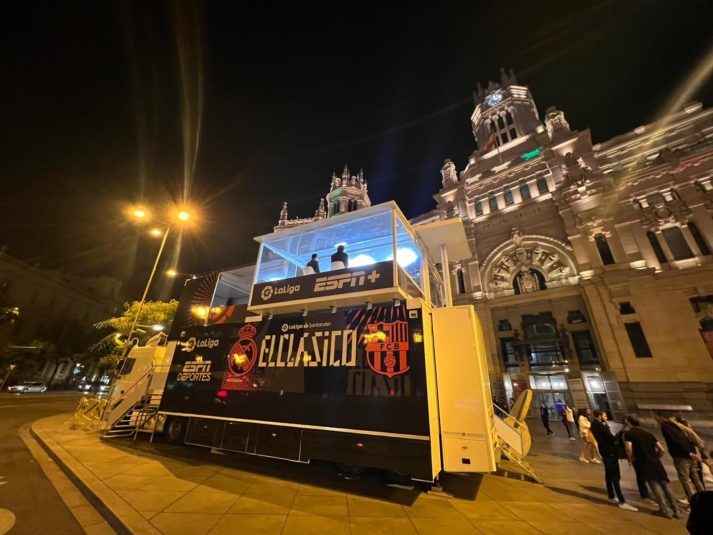 Madrid’s La Plaza de Cibeles is the backdrop of the onsite studio. (All photos: Gisela Leyva)

“The goal was to bring the onsite feeling of La Liga to our different platforms,” says Gisela Leyva, coordinating producer, global event and studio productions, ESPN. “We’re achieving that with specially tailored content and a strong lineup of well-rounded journalists and fútbol legends.”

To shift operations from its typical setup in Bristol, CT, to the Spanish capital, the planning stages required internal communication among different departments and external collaboration with local officials. The multi-day endeavor began five weeks ago, closer to the first few matches of the 2022-23 La Liga schedule. 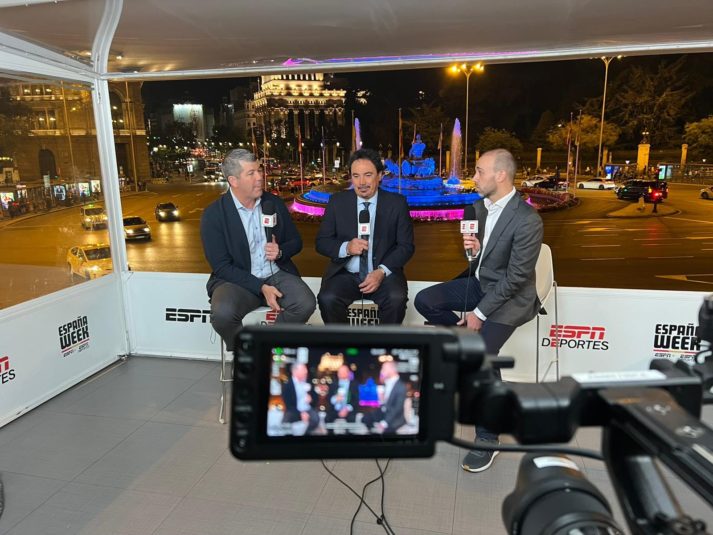 “We were ambitious and considered many locations, but, with large portions of the city currently under a lot of construction, our options were limited,” says Leyva. “We ultimately decided on two iconic locations: La Plaza de Cibeles — which hosts major events, such as Real Madrid’s title celebrations, Cabalgata de Reyes during Christmastime, and the National Pride Parade — and la Plaza de las Ventas.”

As the ESPN crew worked the U.S. side of the effort, Madrid Mayor José Luis Martínez-Almeida played a major role in making the dream into reality before the crew journeyed across the pond. Constantly asking questions about the broadcaster’s vision, understanding the bandwidth needed to pull off their plans, and getting the appropriate clearance to set up shop in a public space, Martínez-Almeida maintained constant contact with the operations team. Leaving the creative freedom to the professionals, the mayor asked only that the broadcast showcase the beauty of his city to U.S. viewers. With Martínez-Almeida on board, de la Vega and Boveda held numerous calls to fine-tune the applications submitted to the government. Ultimately, the project was greenlighted, and, prior to the first production on Oct. 13, a total team of 24 U.S.-based employees (16 production employees and eight on-air talent) made their way to Madrid. 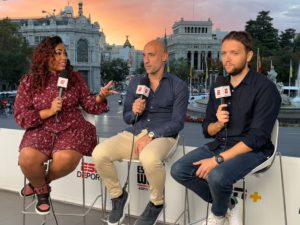 Even though the operation is in its final weekend, the job still requires coordination within the 56-person effort. Besides the Bristol-based crew, there are nine local production-team members and 31 technicians supplied by Mediapro. Inside the compound, Mediapro also provides a mobile production unit. With production crews, familiarity and camaraderie are important, and, luckily, that has been the atmosphere in Madrid. 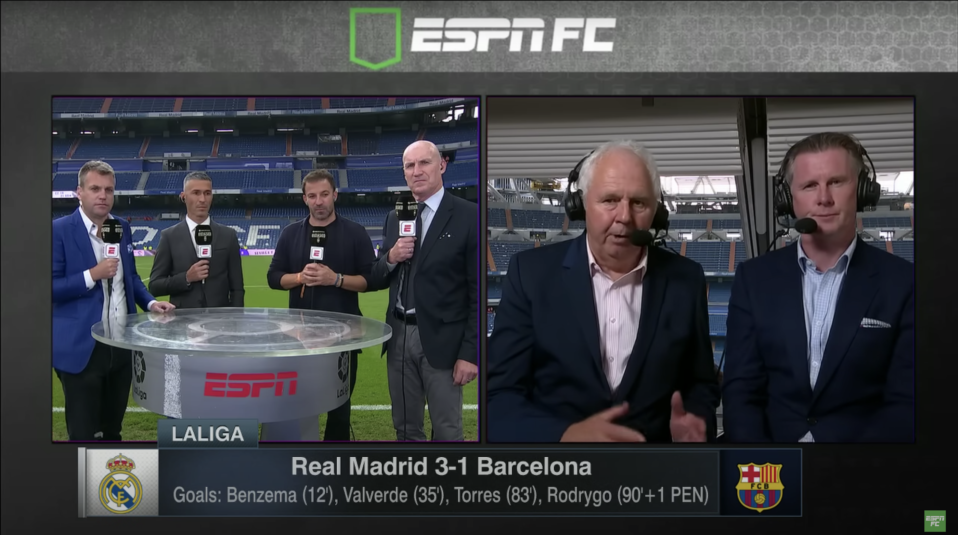 “I have worked with many of these folks for more than a decade,” says Leyva. “In fact, we replicated this scenario at the last UEFA Champions League Final in Paris in May.”

As for technical execution, remote resources have made a difference in distributing content to fans in the States. With crews working 3,505 miles away in Bristol as well as in other locations, such as Mexico, linking employee to employee is key. To that end, five Unity Intercom lines are deployed for audio, and solutions from TVU are used to transmit from the teams stationed in such cities as Madrid, Seville, and Barcelona to the control rooms in Bristol. During shows produced at night, low-latency IFB on top of the same production workflows allows talkback between talent and the production crew in Mexico.

The past week has been a balanced mix of multiple studio shows and onsite commentary deriving from seven stadiums in four cities: Madrid, Seville, Cádiz, and Barcelona. With a total cast of 25 on-air personalities — the U.S.-based team of eight is joined by 11 from Spain, four from the UK, and two from Mexico — fans watching on both ESPN+ and ESPN Deportes have no shortage of entertainment. 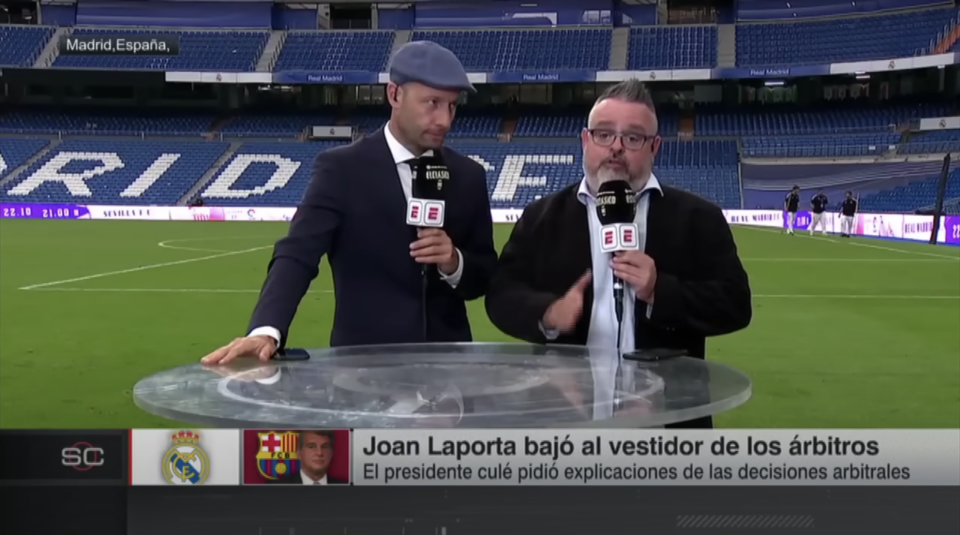 Topping the 70 combined hours of live programming has been live coverage of nine matches in both Spanish and English as well as surround coverage from both plazas. La Liga’s crown-jewel event, the first fixture of El Clásico between Real Madrid and Barcelona at Santiago Bernabéu Stadium, was the most anticipated bout of the 10-day schedule. Taking place on Oct. 16, the 3-1 win by Los Blancos was preceded by pregame editions of ESPN FC and Fuera de Juego. Surrounding the match was a two-hour El Clásico preview special from the popular Jorge Ramos y Su Banda on Oct. 15. In Madrid, the show featured live guests, including Martínez-Almeida.

Other matches covered were Rayo Vallecano vs. Getafe on Oct. 14, Sevilla vs. Valencia and Atlético Madrid vs. Rayo Vallecano on Oct. 18, Cádiz vs. Real Betis on Oct. 19, and Barcelona vs. Villareal at the famed Camp Nou on Oct. 20.

Throughout its history, ESPN has prized its soccer properties. Whether the Men’s and Women’s FIFA World Cups at the beginning of the century or, more recently, UEFA Euro 2020, the game runs deep at the broadcaster. Domestically, ESPN emphasizes coverage of Major League Soccer, but, for matches occurring outside the country, this year’s La Liga coverage may be one of the broadcaster’s most highly invested projects for a European-league competition. 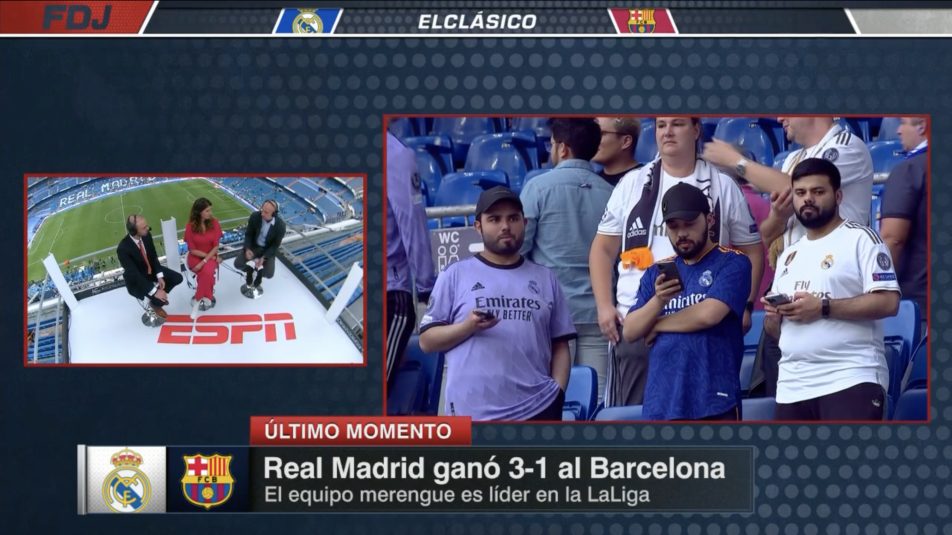 “I cannot be prouder of this team,” says Leyva. “ESPAÑA Week is a collective dream, and the entire team exceeded expectation delivering on our ambition for the project.”