Noise and acoustics management are the big challenges

When the Houston Astros host the Philadelphia Phillies at Minute Maid Park tonight in Game 1 of the World Series, Fox Sports will have NEP EN-2 mobile unit onsite in Houston. Game Creek Yogi truck, with EIC Andrew McManus, will cover the games at Philadelphia’s Citizens Bank Park. And there will be plenty to hear on the broadcast audio from sources in Fox Sports’ bag of baseball tricks.

According to A1 Joe Carpenter, who will be working again with effects mixer Joel Groeblinghoff, those sources will include Sennheiser SK250 transmitters and MK2 lavalieres positioned in the bases, Q5X AquaMics buried around the pitcher’s mound and in the infield, and a Q5X transmitter fitted with a DPA omnidirectional lav on the umpires. Fox’s umpire mics are in addition to the lavalier worn by the officials’ crew chief as mandated by the league this season.

Using a Riedel Bolero RF system, the league’s mic is deployed to explain the results of a challenged call for fans both in the ballpark and watching at home. It uses a signal path similar to that of the NFL’s between the venue PA and the broadcast. 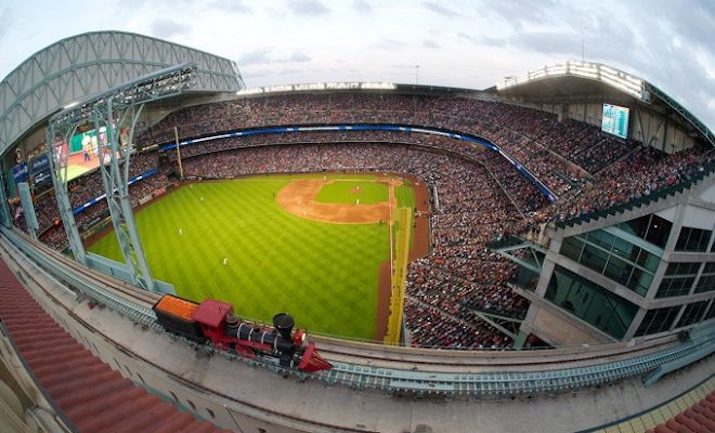 In addition, PitchCom will get its first World Series outing. The proprietary pushbutton, player-wearable transmitter allows players on the field to communicate plays to each other without using physical signs or verbal communication. PitchCom audio isn’t intended to make it to air, although it did sneak in during its first season.

There is the possibility of mics on two players from each team per game, with the potential for wiring them with an IFB earpiece when they are on defense — all at the league’s and teams’ discretion.

The novel fan-address system that MLB umpires began deploying this season will be in place for the World Series. Using Riedel’s Bolero wireless intercom system, it will link the members of seven-person umpire crew to each other and to MLB Advanced Media’s Replay Operations Center, a 900-sq.-ft. studio in New York City. The umpire crew chief’s beltpack — separate from the Q5X transmitters used on the umpires for broadcast audio — also allows wireless connection to stadium PA systems via Riedel’s NSA-002A Network Stream Adapter, which handles bidirectional signal conversion from analog signals to the PA and AES67 data from the beltpack antennas.

“Not every umpire is wearing two beltpacks during the Series,” quips Dan Blanchard, VP, media operations, MLB, “but umpires are wearing a lot more wire than they used to.” 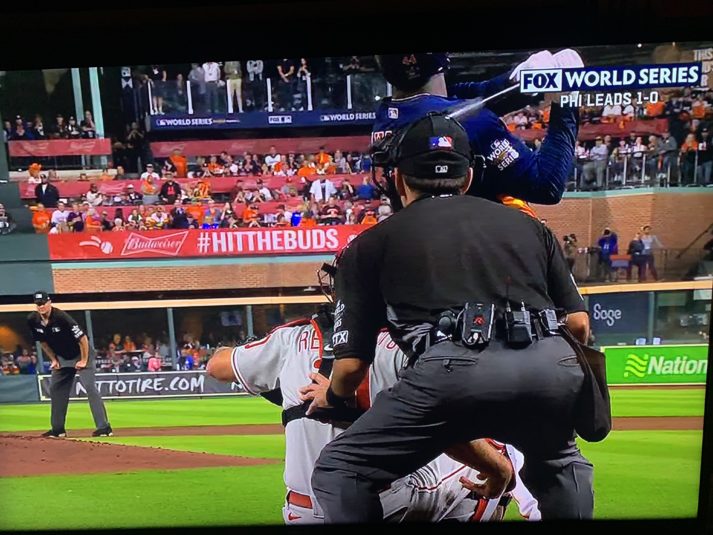 MLB Director, Replay Technology, Brian Richman says the league coordinates, via CP Communications, with the broadcaster and the stadium around RF-spectrum management to ensure that all the growing amount of wireless has the frequencies it needs.

“It hasn’t been an issue for [postseason],” he says, “but, for marquee games like the World Series, it can require additional coordination.”

The main audio challenges are posed by the venues themselves. The movable roof of Minute Maid Park — one of the few installations of the controversial and now-defunct Gilman Sound system a decade ago and home to the Astros’ notorious garbage-pail–banging, sign-stealing scandal in 2017 — will likely be closed: very baseball-like superstitions have arisen around how the roof configuration affects the Astros’ game outcomes. Its closure could create a reverberant acoustical nightmare for Carpenter as he tries to manage crowd sounds, among other sonic effects.

“It’s a different sound indoors with the temperature difference and the reverberation of the roof,” he says. “We’re going to try to minimize all that low-end buildup and all that reverberation and try for a truer sound. The crowd there on TV has never sounded [authentic] to me, like it sounds when you’re in there. We’re going to try to make it a little more realistic.”

The task will be all the more challenging because of the venue’s difficult connectivity infrastructure, Carpenter explains. For the Calrec Hydra network, the crew will have used most of its two days of allotted setup time to run fiber cabling from upper-level camera locations in the stands down through seating areas to the optimal positions for the crowd mics. And the microphones will also be different: he plans to try Audio-Technica AT-4050 large-diaphragm condensers to better accommodate the LFE that builds up in the enclosed venue. 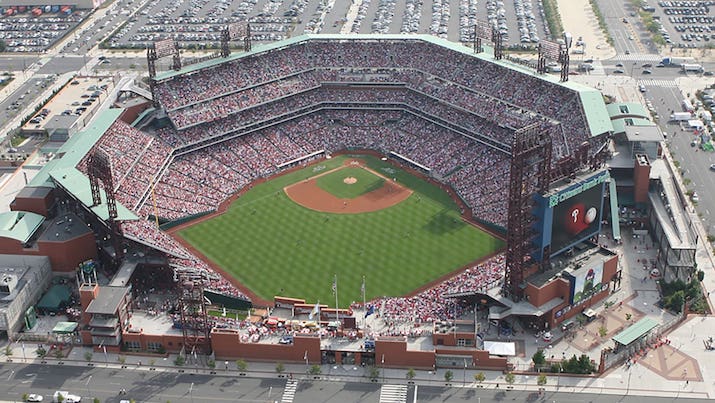 At Citizens Bank Park, wrangling the sound won’t be any picnic either. Fox Sports field reporter Ken Rosenthal was heard — barely — on a video on the network’s Twitter feed trying to talk over a crowd-noise level that reportedly could be heard more than a mile from the stadium during the NLCS games.

“Philadelphia’s the absolute loudest I’ve ever heard; it’s insanely loud in there and just blows right past the OSHA standards,” says Carpenter, referring to the federal agency’s 85-dB recommended limit on sustained noise. (Citizens Bank Park routinely exceeds 100 dB during games.) He further notes that the thinner, chillier outdoor air in Philadelphia combined with the crowd roar caused his console gain structure to creep up as much as 15 dB during the championship series.

“These two stadiums couldn’t be more opposite, night and day: one’s contained, highly reverberant, and reflective, and one’s just really loud. Our approaches to each stadium need to be different.”

Some techniques will remain the same. For example, parabolic reflectors, fitted with DPA lav mics, will be located around home plate for bat-crack and other key sound elements there. Two will be deployed in Houston and three in Philadelphia, the third helping to focus on and isolate that area from the often overwhelming crowd noise. Carpenter says his team has come to rely heavily on the parabolic microphones aimed at the home-plate area to provide a reliable foundation for effects when it’s uncertain whether players or umpires will be wearing lavs for a particular game.

His strategies for them include rolling off the equalization of the crowd and parabolic microphones at about 240 Hz. However, that creates some collateral issues, such as deadening the sound of the bat cracks and mitt pops, so he’ll use a higher Q value, a way of applying very specific EQ in a very narrow bandwidth range.

“I’ll be actively managing the EQ much more than I would otherwise,” he says, “spiking around 660 at 6 dB and a Q of 7 just for those moments. Sometimes, you’re looking at the EQ curves you set up for this [on the screen], and it’s hard to trust it because it just doesn’t look right, but then you hear it, and it sounds fine. It’s pretty intense.”

One new wrinkle this year will be a touch of analog. Carpenter is bringing along an API 2500 stereo compressor — the original hardware version often heard on hit records from the 1980s and ’90s — that he has lately been applying to the announcer-microphone–group fader.

“With the right settings, it adds a nice old-school pop to the sound,” he contends. “With the plug-ins and digital and all, we’d kind of gotten away from what analog sounds like, and I’d forgotten how good it sounded. I put it on the announce bus, and it was great. Now I’m also trying it on the effects. It sounds great. There’s some iron in that box.”