Tolbert’s Restaurant & Chili Parlor in Grapevine, Texas serves up a regular diet of live music for its patrons. Like many restaurants and bars, they took advantage of the recent pandemic to upgrade their sound system. Sound Productions (SoundPro) of neighboring Irving, TX was brought in to realize the vision of Tolbert’s owner, Paul Ryan.

“When we met with Paul Ryan and Steve Tremayne of Tolbert’s, their original vision was to use a line-array approach,” notes Sound Productions account manager, Kris Landrum. “But once we saw the physical space in person, it was clear that a point-source solution would serve them better. It’s a long, narrow room with hard surfaces, which presented a challenge.” 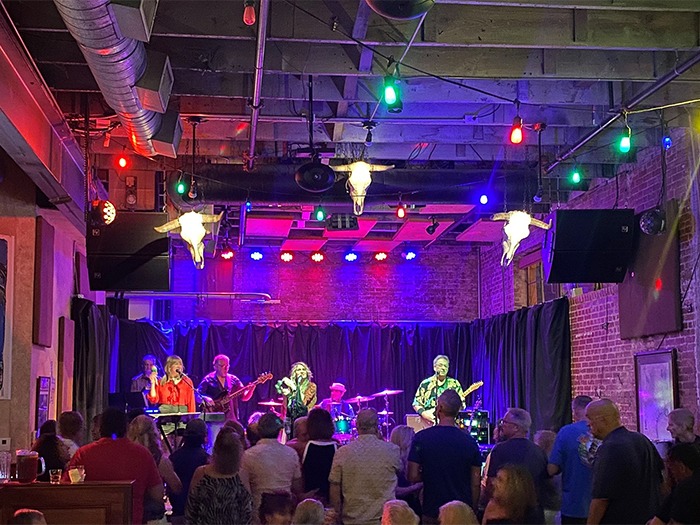 The EVF series from Electro-Voice emerged as a perfect solution. Available in a range of coverage patterns with rotatable horns, front-loaded EVF loudspeakers can be clustered vertically or horizontally to suit the space. At Tolbert’s, the main system features four EVF-1122D 12” two-way models, flown as two-box arrays at stage left and right, each comprising a 60° x 40° model over a 90° x 60° model. The solution offers precise coverage and ample output, yet has a compact, tidy look that keeps sight lines clear. Low-frequency support is provided by an XLCi-215 dual-15” subwoofer beneath the stage. “The EVF series provides the line-array look they wanted with the coverage and control the room requires,” says Landrum.

The entire system is powered by a single Dynacord IPX10:8 DSP amplifier, which proved critical to the installation. “Since Tolbert’s is basically a restaurant, there’s no traditional sound booth, just a small cubby in an awkward location,” notes Landrum. “With so little room to work with, we assembled a rolling rack, which houses their digital mixer and the Dynacord amp, plus drawers for storing cables and such. The IPX10:8 is only two rack units tall, yet it provides 10,000 watts of power across eight channels – enough to power the EVF mains and subwoofer with two channels to spare. The sound cart can be placed almost anywhere on the stage as needed, since the engineer mixes on an iPad. The IPX amps are just great problem-solvers – very powerful, very smart, and very efficient.”

Another key value angle for the install was manufacturer support, as SoundPro worked directly with the EV/Dynacord team on the overall system design. “The support we get from EV/Dynacord is great,” adds Landrum. “They even sent an engineer out to finalize the system. He had a great chili lunch, then took some measurements and fine-tuned the system, which took it from good to great right off the bat. That’s why I love working with those guys.”

Stage monitoring at Tolbert’s is also by Electro-Voice, with six PXM-12MP powered wedges available. In addition to high output relative to their compact footprint, these 12” coaxial models are extremely robust, making them popular with band members and sound engineers alike. For drummers, a powered EKX-15P loudspeaker is available for extra punch. When no bands are playing, such as at lunchtime and during football games, Electro-Voice EVID 6.2 surface-mounted loudspeakers provide the audio.

With the new EVF system in place, Tolbert’s has achieved the look and sound they wanted, improving the musical experience for patrons and artists alike. Paul Ryan is enthused with the results: “We love our new EV equipment. We have live music every night, so we needed a top-notch system, and SoundPro really made it happen. The clarity of individual instruments and vocals is tremendous, and the system is easy to operate. It sounds clear and full at all volumes, and we’ve had numerous compliments from bands, customers, and staff. We couldn’t be happier.”