Sportel Recap: How the Cloud, AI, and Automated Production Are Changing Everything

Three of the big topics of the day — the cloud, AI, and automated production — and how they are coming together and transforming the nature of sports-content creation and distribution were the subject of a panel discussion last week at SPORTEL, the annual event held in Monaco that brings together key rightsholders, technology providers, and decision-makers. 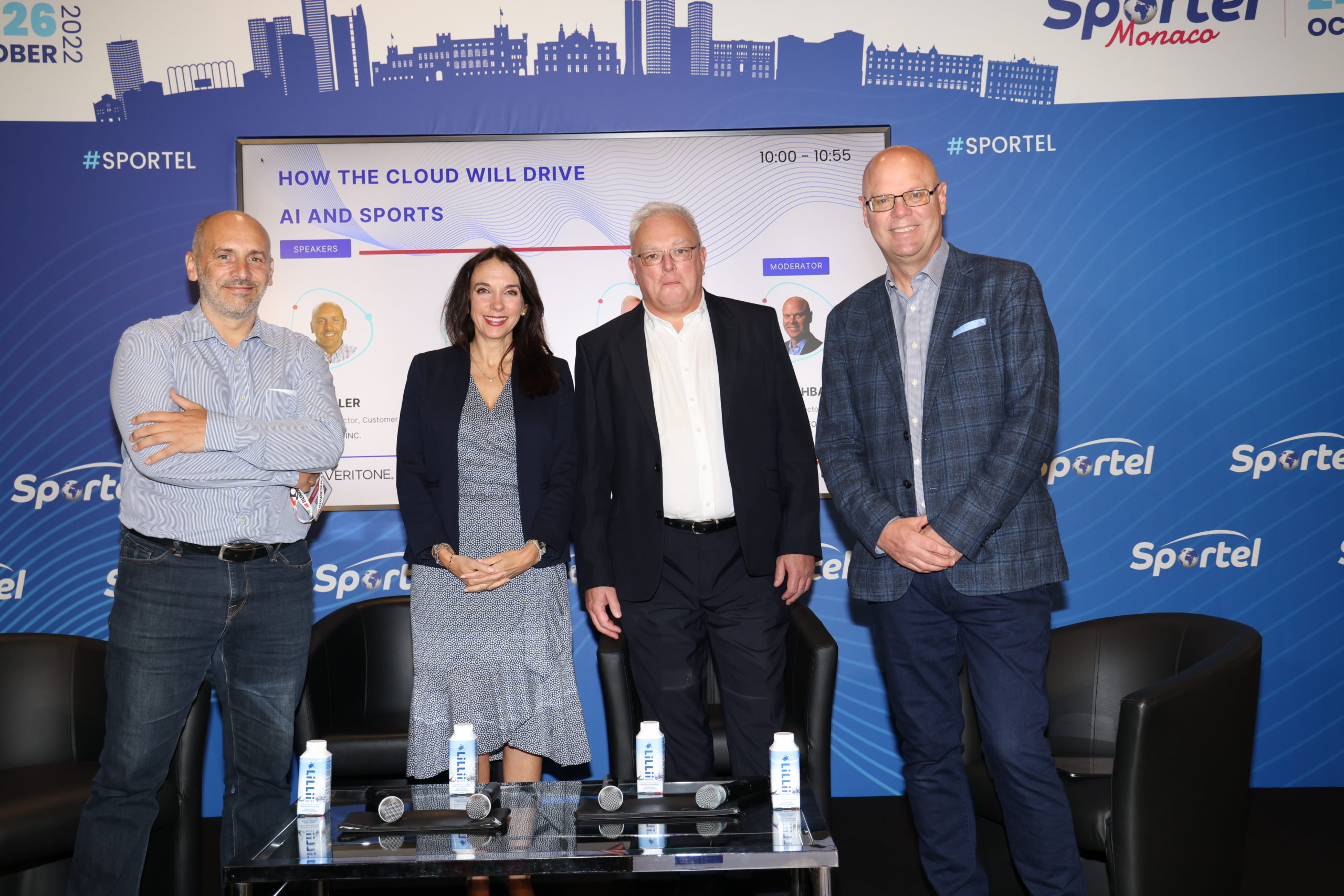 “Nobody calls and says, ‘We want to use the cloud,’” said Julie Souza, head of sports, AWS Professional Services. “It’s ‘Hey, we have a business problem, like trying to get better insight so we can draft better or perform better or make our venues more sustainable.’ At Amazon, we like to work backwards from that and dive into the business use cases. What are you trying to solve? What are we trying to optimize? Then we start thinking about how to do that.

“Often,” she continued, “it’s not just our technologies. We work with our partners and bring those technologies to bear as we’re somewhat agnostic and really focused on delivering business outcomes.”

Souza said AWS is focused on five pillars when it comes to sports organizations: sports data for on-field performance; virtualizing production; smart venues with sustainable connectivity; improving the fan experience; and customer- and fan-data analytics to help with marketing and commercial needs.

“Those are the big ones,” she said, “but we are dabbling in others as well.”

Brian Phillpotts, business development, sport governing bodies, Pixellot, said his company produces 160,000 live matches across 72 countries with 27,000 systems across 18 sports. And many of those events are produced with zero staff once the initial setup is complete.

“Once the cameras are set up,” he said, “there is someone who goes into the content-management system and schedules the time of the event and the type of sport algorithm that needs to be triggered. Our sweet spot is Tier 3 or Tier 4 single-camera productions, and, currently, the workflows are either all automated or all traditional.”

There is, however, growing demand for putting those automated camera outputs into traditional broadcasts. For example, in Italy, both Sky Italia and DAZN are taking output from an automated tactical camera that has been deployed league-wide by Italy’s Serie A.

“It’s a 50-fps camera that is being fed into the main production so automated production is starting to move from here to there,” he added.

That hybrid of automated and non-automated production is being matched on the cloud side with a hybrid world of private and public cloud. From the AWS perspective, the goal is to use public-cloud servers that maximize utilization, ultimately driving down costs.

“All the equipment is being handled and managed by AWS, and the user is on a consumption basis,” explained Souza. “It all goes back to hardware not being utilized and optimizing it on AWS servers in the public cloud. It’s a reality that big shows could be done in the cloud. We’ve been doing a lot of great proof of concepts side by side with a normal production using hardware. And it’s working.”

One important aspect of the move to the cloud is the ability to provision content and give rightsholders (and others) access to content without the need for manual intervention, copying of files, etc. The cloud can bring together video, audio, data, AI engines to identify content and open up a new world of benefits for content owner and rightsholder alike, according to David Candler, senior director, customer solutions, Veritone.

“It’s all about using AI to create operational efficiencies all along the supply chain and, most important, create new monetization revenue avenues,” he said. “We’ve been working with the USTA at the US Open for many years and make the archive accessible during the live event, as well as capturing new content on premises and pushing it to the cloud. We’re using things like EVS IPDirector to capture live content and post it into our Digital Media Hub, which is cloud-native. And there are many global stakeholders who need content from the event, like press associations, broadcasters, sponsor, teams, and so on.”

The cloud is leading to more-creative and -timely content because a rightsholder can access the system and pull out a clip from long ago that may suddenly become relevant — for example, when a player like Serena Williams winds up her career.

“A sponsor like Rolex may want to see all the aces by Rafa Nadal with a Rolex logo in the background,” said Candler, “so we’ll use structured data to find the ace and then use face and logo recognition to complete the picture.”

Veritone also provides Veritone Voice (lifelike AI-powered voice cloning) that can open up new opportunities for advertising, marketing, commentary, or script reads. The system requires three hours of professional-quality audio recordings to be ingested, and then the voice clone can be created. Once it’s created, it can be fed a text script and, within two seconds, “read” the script. Or it can be done speech-to-speech, which means the cloned voice can be mapped over the voice of another person.

“Imagine being able to get highlights with the narrator of your choice and in up to 70 foreign languages,” said Candler. “With his permission, we could make Ronaldo speak German, English, and other languages. This isn’t the future: it’s here now.”

He noted that Randy Hahn, commentator for the San Jose Sharks, uses the system to do all of his ad placement and sponsorship reads. “They’re all automated, and Veritone Voice allows Randy to be in three or four places at the same time.”

The area of AI relies heavily on various cognitive technologies to recognize players through numbers, uniform colors, position on the field, audio, and facial recognition (although the latter can introduce legal issues).

“In the case of sports,” said Souza, “we’re primarily pulling off the name or number on a jersey in order to create a dot [that represents the player] and then following it around the field.”

Veritone’s platform also makes use of various AI engines to drive efficiencies. Candler said the company is constantly evaluating those engines to ensure that the AI is as accurate and timely as possible.

“We’ve built aiWARE [the operating system for AI], and, since 2014, we’ve evaluated and used over 5,000 cognitive engines,” said Candler. “At any one time, we have about 500 live as we use the industry’s best of breed, you name it. We’ve also built benchmarking tools to look at accuracy.”

When Pixellot and Gravity Media partnered with ITV Africa on production of local football matches in Namibia, it was proof of the positive effect that technologies like automated production, AI, and the cloud can have on transforming the fan experience.

“Some of the kids were watching their township team play away from home for the very first time,” said Phillpotts. “Without AI production and without the cloud, that clip doesn’t exist. And those kids don’t get that experience, and that moment isn’t available to them.”

Phillpotts added that, while producing the games is the first step if an organization wants to really connect with fans, it needs a content presence that extends beyond match day.

“There are lots of examples where an organization decide to take control and put up an OTT platform and put up a 90-minute game once a fortnight, and it doesn’t work,” he said. “We’ve been working very hard over a period of time to make sure that what we are doing is not only producing the game but also having the complete end-to-end solution. We have our own OTT platform although we are happy to deliver to somebody else’s.

“We’re working hard inside that OTT platform to make the experience higher,” he continued. “The leagues are looking for what looks like a decent production, there are some good data-driven graphics, and they can add commentary. And you can go in and just click personal highlights. It’s our belief that, going forward, the whole personalization thing will be down to clips of individual players and 30 personalized feeds of one event.”

Added Souza, “Fanbases need feeding and watering, and, to some extent, there’s an insatiable desire to have more. It’s not just practices; behind the scenes, our job in sports is to bring the fan as close to the game action as possible. Using AI and machine learning, you can go back to that archive that we talked about and make content more readily available not just for fans but for distribution partners, too.”

All of this demand for new content (some of it beginning with mining old content) requires more and more automation and AI to make it possible to find the content without investing hours upon hours of research. Candler cited multiple projects like the San Francisco Giants and Inter Milan, for which the archive system was trained to recognize 1,500 faces.

“San Francisco Giants had a huge archive,” he explained, “and we were able to provide deep discovery in a matter of months, which would have previously taken 15 interns a year to tag.”

The panel concluded with a look into the future and where the industry will be with respect to AI, automated production, and the cloud in 2030.

“I think all production will be virtualized and that will be a much leaner, more sustainable way of producing live events,” said Souza. “If you’re a producer of content, it opens up your talent pool of who you can leverage because you don’t have to be onsite in Lincoln, NE. There will still be some things that are probably hardware, and you need the connectivity. But I think there’s so much more flexibility when operating in the cloud.”

Candler opined that it will be important to keep an eye on the Metaverse, cryptocurrency, and NFTs to see if they will become a real factor in the industry. “The voice cloning and the avatars we make will create your sonic identity in the Metaverse, so we are ready to go. But I just think we’re gonna see more and more personalization.”

Philpotts closed things out by focusing on the kind of companies that, coupled with automated production, could truly change the game.

“We would like to be in a position where the content that we produce dovetails with Second Spectrum and is brought to life by MOVE Ai because they’re starting to do stuff at a really cost-effective basis,” he said. “Then you start looking at personalization: when that can be brought to life by companies like Aura, it will be staggering.”