Sunday Night Baseball POC marks first time all feeds from SSMO camera system are transmitted through the cloud, go to air for replay

Over the past decade, the “REMI revolution” has reshaped live sports production, creating new remote-integration workflows that allow broadcasters to not only be more efficient but also enhance the technology available for their coverage. ESPN and Disney Media & Entertainment Distribution (DMED), an early REMI pioneer, are now looking to take that REMI revolution into its next phase: the cloud.

On Oct. 2, ESPN and DMED teamed up to launch a cloud-based workflow for super-slo-mo replay as part of its REMI production of the Mets-Braves Sunday Night Baseball broadcast from Truist Park in Atlanta. Originally intended to be a proof of concept (POC), the cloud-based replay workflow ended up being integrated into the live broadcast, marking the first time replays from a super-slo-mo camera system went through the cloud and made air as replays on a live game broadcast.

“From a REMI perspective, it has been our holy grail to get a super-mo [camera] from onsite either to Bristol or to the cloud to capture and roll replays,” says Chris Strong, director, specialist operations, DMED. “This is the next step in the evolution of REMI.” 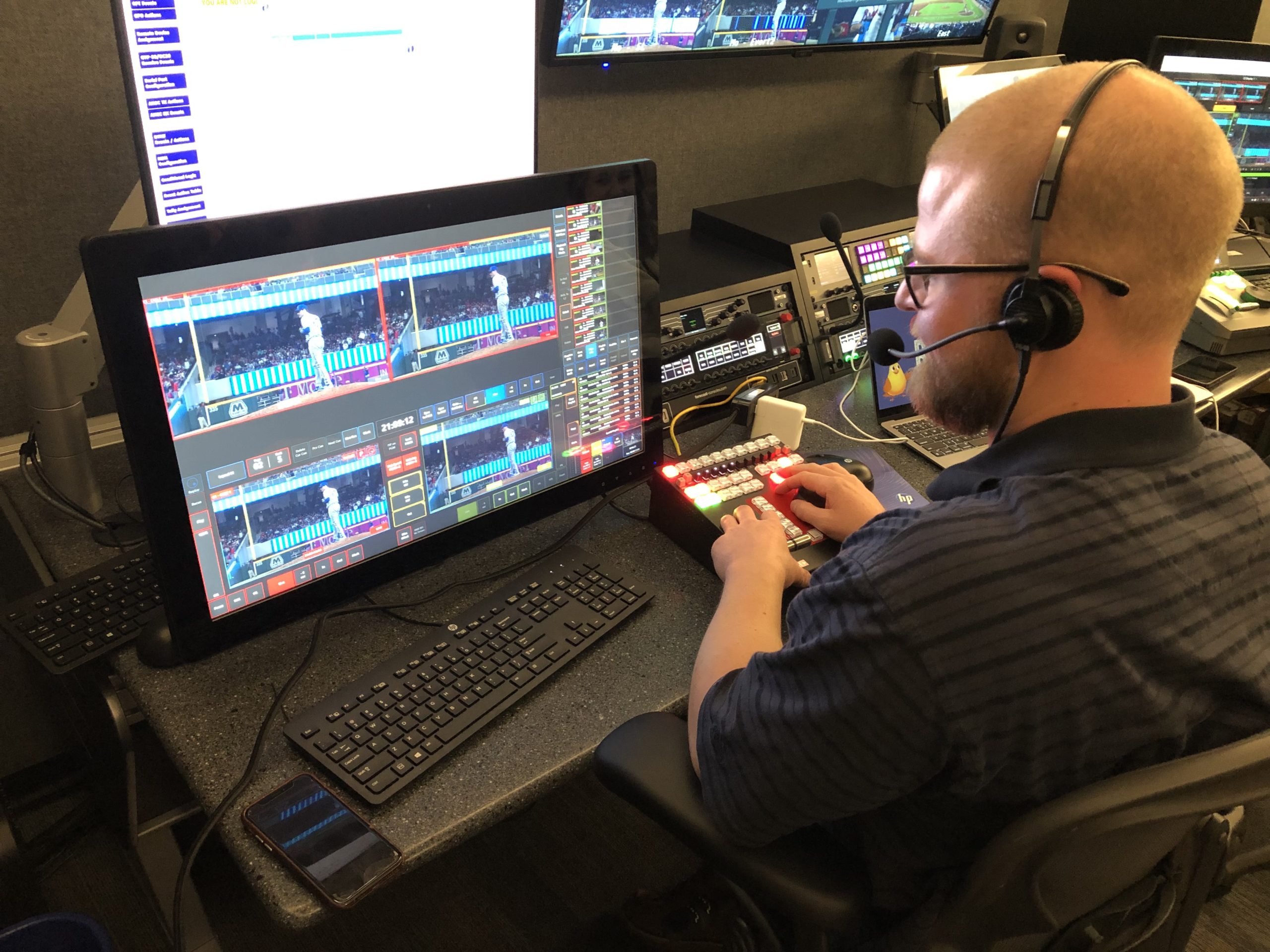 From POC to Live Broadcast: Inside ESPN’s Cloud-Based Super-Mo Replay

ESPN deployed a Sony HDC-4300 camera in 6X-slo-mo mode (positioned at low first) at Truist Park, and all six 720p single-link phases from the camera were encoded onsite and sent into an AWS cloud instance. These were transmitted as a single replay feed to ESPN’s campus in Bristol, CT, where the replay operator was located.

“Sunday Night Baseball typically runs six 6X super-mo cameras,” says Strong. “That’s a lot of resources to do a REMI because it would [require] 36 [transmission] lines if you wanted to bring all those to Bristol to run replay, which is just not feasible in terms of cost and resources. But, when you take those [feeds] into a cloud instance, it becomes much more tangible to bring that back to Bristol.”

The cloud–SSMO–replay POC ran on two different operating systems in Bristol — SimplyLive ViBox SloMo for the first half of the game, Evertz DreamCatcher for the second half — to see how each performed. ESPN’s transmission team checked the replay signal in Bristol prior to the start of the game and cleared it for air, opening the door for it to be integrated into the broadcast. The cloud-based feed was used on the second replay of the game, and the ViBox and DreamCatcher systems were used for a total of roughly 30 replays throughout the broadcast.

“In the REMI world, one of those production enhancements that we haven’t been able to accomplish consistently has been super-mo. And that’s primarily due to the heavy transport needs it requires,” says Dan Lannon, manager, content operations, DMED. “For example, in the past, we’ve always done super-mo within a REMI production like Sunday Night Baseball either by remotely controlling a server that lives locally onsite or with an operator physically onsite in the truck.

“But using the cloud,” he continues, “allows us to do a similar workflow to a REMCO [remote-controlled production] without having to rely on hardware that’s located on the mobile unit. That opens up so many opportunities for us to be more flexible with that gear and ultimately move this into to more productions when possible.”

To keep the latency as low as possible, ESPN strategically selected a data center for the replay server in Virginia — geographically between Atlanta and Bristol — to bring the ping down to a nearly invisible 14 ms. Although this specific POC leveraged AWS, the replay workflow is agnostic when it comes to the cloud provider.

“Long term,” says Lannon, “we can be strategic about the location where your servers are to cut that latency in half. Our cap in a normal REMCO model is Bristol to L.A. because it’s roughly around 120 ms, which is impactful but the operator can still work with it. One of the benefits that we’re anticipating with the cloud is, we can start to be very strategic about where we place operators and where those servers are located in the country so that we can create an optimal working environment for the operator as well as minimal transport time.”

According to Ben Whitmire, a regular on ESPN’s SNB productions who served as the replay operator for both the ViBox and DreamCatcher POCs, the cloud-based replay workflow felt no different from the experience of having the server on-premises.

“[Whitmire] was just in a different room in our facility,” notes Lannon, “but it was completely transparent to the production team. It performed exactly as if we were running a server on-prem, so there was no change at all [for the production team].”

File Transfers and Melts: A True End-to-End Replay Workflow in the Cloud

In addition to capturing and replaying content from the SSMO camera through the cloud, ESPN and DMED also worked together to set up a cloud-based Signiant high-speed file-transfer workflow between Atlanta and Bristol. This included file transfers from Bristol to Atlanta, as well as postgame-melt workflows from onsite replay servers to Bristol.

“Ultimately,” Lannon explains, “we wanted to test end-to-end workflows of everything a replay operator would need, so we re-created our typical file-transfer and melt workflows [in the cloud], working with our DMED media-engineering and technical-services teams. As a result, the replay operator had everything they would normally need from a file-transfer workflow perspective — whether preproduced packages and edits or frontends and interstitials. And our media-operations group was also able to archive and test all the [melt] files and make sure everything lined up.

“We were successful, and it was very easy to set up,” he continues. “Basically, we could take everything that our engineering team had already developed for an on-prem solution and apply it within the cloud-based solution. It was a true end-to-end replay test. There’s nothing that we anticipate that’s still lingering that we need to test before we say, We’re good to go.”

Beyond the Replay: Bringing the Entire Live-Production Ecosystem into the Cloud

The SNB POC was actually the second cloud-production POC undertaken by ESPN and DMED. Earlier this year, the two teams partnered on a larger-scale POC to explore what aspects of the entire live-production ecosystem could potentially be moved into the cloud, including the video switcher, audio console, and audio/video-routing gear.

“We created an ecosystem where Vendor A had to be able to work with Vendor B and Vendor C to see where everybody is,” says Strong. “From that, we were looking to extract different specific workflows for the cloud. That worked really well.”

Adds Chris Calcinari, SVP, production operations, DMED, “This POC had everything — switchers, audio, routing — in the cloud. We realized that, while a couple of those pieces weren’t quite ready for primetime, many of them definitely were. Now we’re trying to figure out which pieces we can use to enhance what we’re already doing for REMI and make us more efficient. It doesn’t have to be an all-or-nothing sort of solution; it could be bits and pieces that help make us better while we figure out the bigger picture.”

Though declining to get into specifics on future tests, Calcinari says additional cloud-production POCs are already in the works at ESPN and DMED.

“This changes the way we think about distributed production as a whole,” he notes. “Long term, we could have people literally anywhere: at their homes, in Bristol, anywhere. That’s the next step. In the meantime, we’re trying to figure it out by using our resources in the building to test all of this out and find efficiencies.”

‘Clearly, Cloud is the Next Iteration of REMI’: The Future of Live Production

Echoing Calcinari’s point, Lannon expects these new workflows to enhance ESPN’s REMI productions as they continue to grow in importance.

“It’s not like REMI is just for the lower-tier events anymore. You’re seeing it on Sunday Night Baseball and big [properties] like that,” he says. “We have to find different ways to enhance these productions and continue to grow their value. This is step one, and it allows us to open the door to a lot of new ideas — whether that’s applying the super-mo replay to another production or applying whatever other production tool we want to utilize in the cloud.”

As for the pace of innovation, Calcinari doesn’t see the move to the cloud slowing down anytime soon. He notes his team’s visit to the NAB Show in April where they met with various cloud providers and were impressed by how quickly their live-production capabilities had evolved. This served as the catalyst for the POCs later in the year, and now, less than seven months later, these tools are already being used in high-profile live ESPN broadcasts.

“Clearly, cloud is the next iteration of REMI,” he says. “We’ve been talking about this for a long time, and it’s finally coming to fruition. Hopefully, in the next year or so, we’ll be doing a lot more of this — whether that’s a full production or just pieces of it on individual productions. Clearly, this is moving really quickly.”