NBC Sports Catches the Sound of the Breeders’ Cup Race

Those were the actual horses you heard, thanks to additional JockeyCam mics

NBC Sports’ coverage of the 2022 Breeders’ Cup kicked off on Nov. 4 with Future Stars Friday on the USA Network and continued with Championship Saturday and the big race on NBC on Nov. 5. In sum, 14 championship races with purses and awards totaling more than $30 million, were run over the weekend at Keeneland Race Course in Lexington, KY, with unbeaten Flightline winning the marquee race by more than eight lengths.

The broadcast-sports tradition of a long weekend to herald a three-minute event was also reflected in the race’s audio: much of the event’s ambient sound and effects were captured by athlete-mounted microphones, underscoring the value of that ongoing trend.

A1 Rick Bernier managed an array of mics across the various sets. The show’s main stage featured four primary DPA headset mics with talkback over a Lance Design networked-audio system, four backup DPA headsets over a Calrec Hydra network, and a pair of stereo effects mics. The betting set, hosted by analyst Steve Kornacki in front of touchscreen to examine betting trends, was miked with four DPA headset mics over Calrec Hydra and one stereo effects mic.

But wait, there’s more. Race announcer Larry Collmus’s set had one primary and one backup announce headset and one steward’s mic, all with talkback over the Lance network; and a stick mic, lav backup, and two stereo (high and low) effects mics over Calrec Hydra. There was also a pair of jib cams with stereo effects. 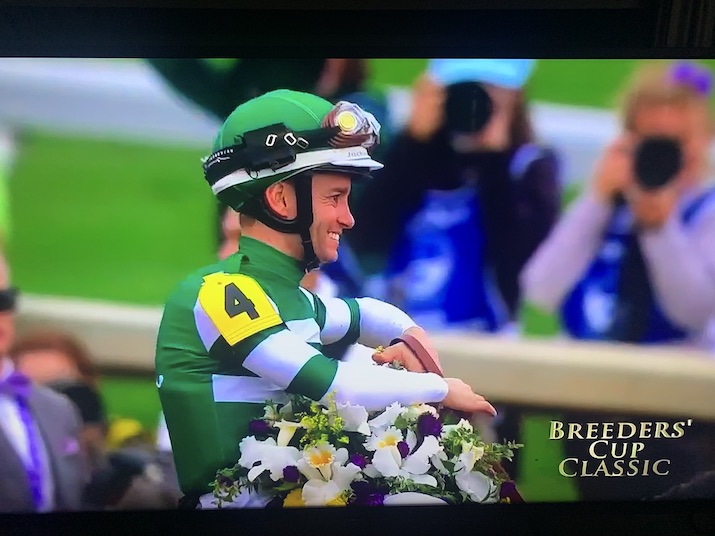 The square lump on the side of the helmet is the JockeyCam transmitter, with the lens visible just under the goggles. For the race, a lavaliere microphone was included in some versions.

A total of 24 partylines for all the sets were managed through a Lance Design system. Comms included 24 IFBs. Twelve EVS playback systems and four music-playback devices also were deployed.

“It’s a massive technical undertaking and a lot of fun to mix, but, more than anything, it’s an opportunity to see the power of teamwork in action,” says Bernier of the race, his second as senior A1 on the Breeders’ Cup Championship. “From collaborating with NBC Sports Senior A1 and Audio Design Engineer Mike DiCrescenzo on the overall plan, to working with my submixer Greg Malenovsky, Joe Beahm on comms, and our team of eight A2s, there are few productions more satisfying when it all comes together and we hit air.”

Audio From the Racecourse

On the track itself, a slew of RF microphones, provided and managed by BSI, included three rear-positioned jockey mics and four jockey head-cam mics, putting viewers in the saddle with the riders and capturing real-time race sound. In addition, there were eight wireless stick mics with talkback — four primary mics for talent, others for outriders, paddock judges, guests, and a spare — plus four gate mics, three trainer mics, a riders-up mic, and five RF cameras with stereo effects.

The huge deployment of microphones near the track, particularly on the jockeys, meant that viewers mainly heard the actual horses as they thundered around the oval. Much of that came from the JockeyCam, some of which had a Røde lavaliere microphone with 1/8-in. connector, placed on the back of the helmet and hidden in the strap, according to A2 Richard Headen, who also managed all BSI rear-mounted MKE-2 jockey mics for all the races.

Although sweetening effects, in the form of prerecorded running horses, are sometimes used to maintain that effect consistently throughout the race, they were “barely used” over the weekend, Bernier says.

“Those [effects] beds are authentic in that they are from previous races,” he explains. “We have different recordings from various dirt, turf, and weather conditions, but we didn’t find ourselves needing them much this year. I’m happy to say it was very low in the mix when used and was most often not needed at all. We have the mics on the back of the jockeys so they’re with us everywhere they go. This year, we had the addition of the head cams with embedded audio to give even more variation, further reducing any need for an FX bed.”

It all came down to the marquee race, where Flightline covered the 1¼ mile in just over two minutes. Every bit of audio from those dozens of microphones contributed to a weekend’s worth of exciting sports television, and it all came together when viewers heard Collmus’s final exclamation as horse and rider flew past the finish line: “Flightline is AWE-some!”