The college basketball season began in earnest this week with more than 200 games tipping off across the NCAA on Monday.

Thus starts a 125-day stretch when ESPN will air at least one college basketball game on its portfolio of distribution networks. By the time the madness of March begins, ESPN will have broadcast more than 1,000 men’s and women’s college basketball games on linear television (the Disney family: ABC, ESPN, ESPN2, ESPNEWS, ESPNU, SEC Network, ACC Network, and Longhorn Network) and streamed another whopping 6,500+ games across ESPN+, ESPN3, SEC Network+, and ACCNX.

“It’s a crazy number,” says David Ceisler, VP, production, ESPN. “We did our launch call last week, and we had an invite of more than 600 people from producers to directors, talent, the on-campus school productions. Some nights — and some Saturdays — we could have upwards of 40 games at once. It’s pretty cool that there isn’t a day off for the season. That gets me excited and scared at the same time.”

How does the ESPN family handle such a massive scale of games over the next four months? By tapping into every flavor of production workflow that the company has in its arsenal. From full onsite truck productions leveraging the top-end gear to full-on REMI productions and games produced wholly by the schools and conferences themselves (as is the case with a healthy chunk of the games streamed to ESPN+). 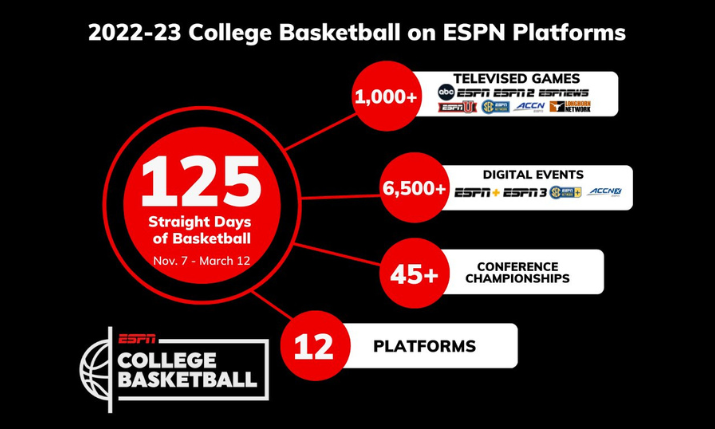 That means, from an operations end, making changes that create better efficiencies and reliable consistencies across a very diverse schedule.

“We ascribe to serving the fans,” notes Shane Smith, operations manager, ESPN. “It’s not necessarily about pulling out all the stops in all of our productions but about doing our best to up our game across the board by coordinating deals with our vendors to increase some of the toys, such as telestrators. Then, of course, operationally for us, it’s a matter of putting big systems in place to tackle the big tasks.”

Atop the collection of production flavors is ESPN’s Saturday primetime game, which officially kicks into action on Jan. 7. The big leap there is that those games will be produced and delivered in UHD with high dynamic range (HDR). Via a truck partnership with Game Creek Video, ESPN deployed a similar workflow at the end of last season when it produced Coach K’s final game at Cameron Indoor Stadium in UHD.

It should be noted that these shows will not be produced purely in UHD HDR; 1080p upconversion will still be used in certain areas of the truck. Says Operations Specialist Michael Sullivan, “the hope is to develop a two- to three-year strategy where we are a 100%-UHD/HDR show.” The final product, however, will be shipped in UHD HDR and even delivered to viewers’ home in 4K where distribution partnerships allow.

Among the other production models on the menu is a new workflow being pioneered across the ESPN family that allows super-slow motion replay to be moved into the cloud. Although it’s still in the early stages, tests are being scheduled in a side-by-side production with existing college basketball games, with the hope of growing its use later in the season and into next year.

“Assuming those go extremely well, I think we’ll start to explore,” says Sullivan. “That continues to be a priority for us because, in the long term, if you’re not bound by hardware that has to bounce around trucks on a show-by-show basis, it gives you a little bit more flexibility in the technical complement of a show. It cuts down on the number of paths that we have to bring back to Bristol, which allows us to also produce a larger number of games when we’re not eating up 10, 12 paths of REMI lines. When we’re doing that all in the cloud, we’re just bringing one path back to Bristol.”

That ability to produce more and more games is certainly an enticing one to both production and programming even though this year’s slate is already loaded at a historic rate.

The women’s side, meanwhile, are also underway and ESPN’s game total is the largest it has ever been. More than 230 games will be televised; a particularly enticing matchup on Nov. 20 pits the top two teams in the preseason polls, South Carolina and Stanford, head-to-head. The list of specialty events early in the season is extensive: the Women’s Battle 4 Atlantis (Nov. 21), the Phil Knight Invitational (Nov. 24-27), the Jimmy V Classic (Dec. 4), the Basketball Hall of Famer Women’s Showcase (Dec. 18), the Jumpman Invitational (Dec. 20-21), and the We Back Pat games (Jan. 19-26). More than 2,000 women’s games will stream on ESPN+.

“We’re going to up our continued growth of the women’s package,” says Catherine Carroon, operations supervisor, ESPN. “Continuing to grow that relationship and grow that momentum into the women’s tournament is really big for us.”

ESPN delivers live coverage of every game of the NCAA Women’s Basketball Tournament. The Women’s Final Four (which is in Dallas this season) airs on ESPN on Friday, March 31 with the National Championship Game on ABC on Sunday, April 2.

Additionally, the ESPN team is excited at the prospect of the first “normal” college basketball season since 2018-19. The completion of the 2019-20 season was, of course, abruptly shut down with the start of the COVID-19 pandemic (leading to the cancelation of both men’s and women’s tournaments). 2020-21 was played almost exclusively in front of empty arenas and with heavy restrictions on how many television crew members could test and be onsite. Even 2021-22 experienced a hiccup last December and January when the Omicron COVID variant led to a slew of cancelations, postponements, and rescheduling.

“I think there’s a really cool feeling going into the season,” says Ceisler. “There’s an energy that is exciting because venues and student sections are going to be packed, and we’ll be happy not to see the schedule get thrown in the blender. It’s going to be big for us getting everybody back to where we were: building so much momentum before COVID forced us to have to create all kinds of alternative workflows. Now it’s about ‘how do we put our best foot forward every game’ and ‘how do we get back to telling great stories and documenting the game properly?’

“That’s a big one for me with talent and production,” he continues. “We’re in the right places, in the right moments of the game, and the operations team — as a partner to production — has given us all the resources we need to succeed.”