Armed Forces Classic: After 11 Years, ESPN Is Again Producing a College Basketball Game on the Flight Deck of an Active Aircraft Carrier

Friday marks 11 years to the day when ESPN pulled off a magical night of sports television.

As dusk settled over San Diego on that Veteran’s Day in 2011, top-ranked North Carolina faced Michigan State in an early-season men’s college hoops matchup played in wildly unique conditions. That Friday night, the Tar Heels rolled to victory playing on an outdoor court spread across the flight deck of the USS Carl Vinson. It was first time a college basketball game was ever played on an active aircraft carrier. 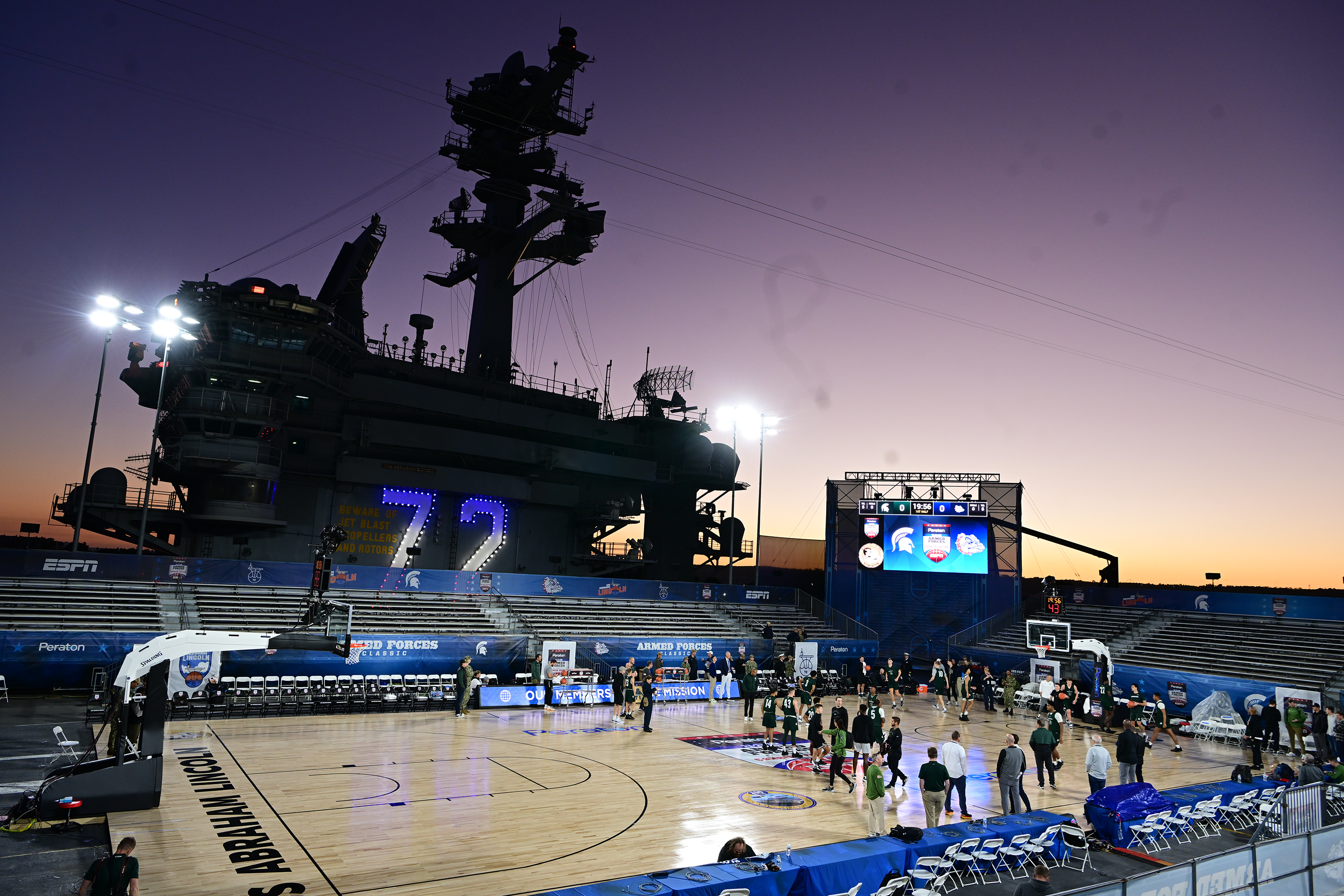 On Friday night, ESPN will broadcast the 2022 Peraton Armed Forces Classic, a college basketball game played on the flight deck of the USS Abraham Lincoln in San Diego. It’s the first time ESPN has broadcast a game like this since the Carrier Classic in 2011. (Photo: Josh Gateley/ESPN Images)

President Barack Obama and First Lady Michelle Obama sat courtside as 8,111 fans — many of them active military in uniform — took in a spectacle that, for viewers at home, was like watching a Norman Rockwell painting of a modern-day USO Show.

The inaugural “Carrier Classic” was a smash hit, and, when multiple games were scheduled the following year to re-create the captivating scene, it seemed that a new specialty-sports-television trend was born. The magic couldn’t be bottled, though, and logistics reared its inevitable head.

In 2012, four similar games were scheduled on vessels at Charleston, SC; Jacksonville, FL; and again San Diego. Only one went off without a hitch: Notre Dame and Ohio State were able to complete a women’s basketball game aboard the USS Yorktown off South Carolina, but the second part of the doubleheader, pitting the Ohio State men against Marquette, was canceled because of an unsafe amount of condensation on the court. The same night, a Georgetown vs. Florida men’s game on the USS Bataan was called in the middle of the first half due to a similar condensation issue. Meanwhile, aboard the USS Midway at San Diego, a game between Syracuse and San Diego State was postponed due to rain and pushed two days later to a Sunday afternoon. The game was completed, but the contest — ultimately won by the Orange — was ravaged by wind.

As abruptly as the concept had started, the aircraft-carrier games became a doomed entity, and there hasn’t been another one.

The network is rolling up “Prime Plus” resources for the event, which brings Michigan State back to the scene of its 2011 date, this time to face Gonzaga. Two production trucks. 25 cameras. More than 20 effects mics. And the promise of another broadcast to remember.

“[This ship] is a living, breathing city, and we’re hoping to show some of that off,” says David Ceisler, VP, production, ESPN. “[This broadcast] is a unique day-in-the-life: what goes on, the people who are on this ship, what they sacrifice. I’m proud to be a part of this coverage, and to have the carrier as a backdrop is pretty remarkable for us.”

One of the key differences from the show 11 years ago is the result of both general technological development and increased adoption of live aerial cameras. ESPN will have a live drone, the Goodyear Blimp, and a two-point cabled aerial camera system (Supracam) stretching an estimated 875 ft. — nearly the entire length of the ship’s deck. All three will prove significant in adding gorgeous imagery from the scene.

ESPN is also bringing in a jib (positioned at left slash and outfitted with a Sony 2500), super slo-mos at midcourt and at the tight Camera 2 location (the main game-camera positions are aboard scissor lifts behind the northside stands), and five Fletcher robos at the above-the-rim and “slam cam” positions. 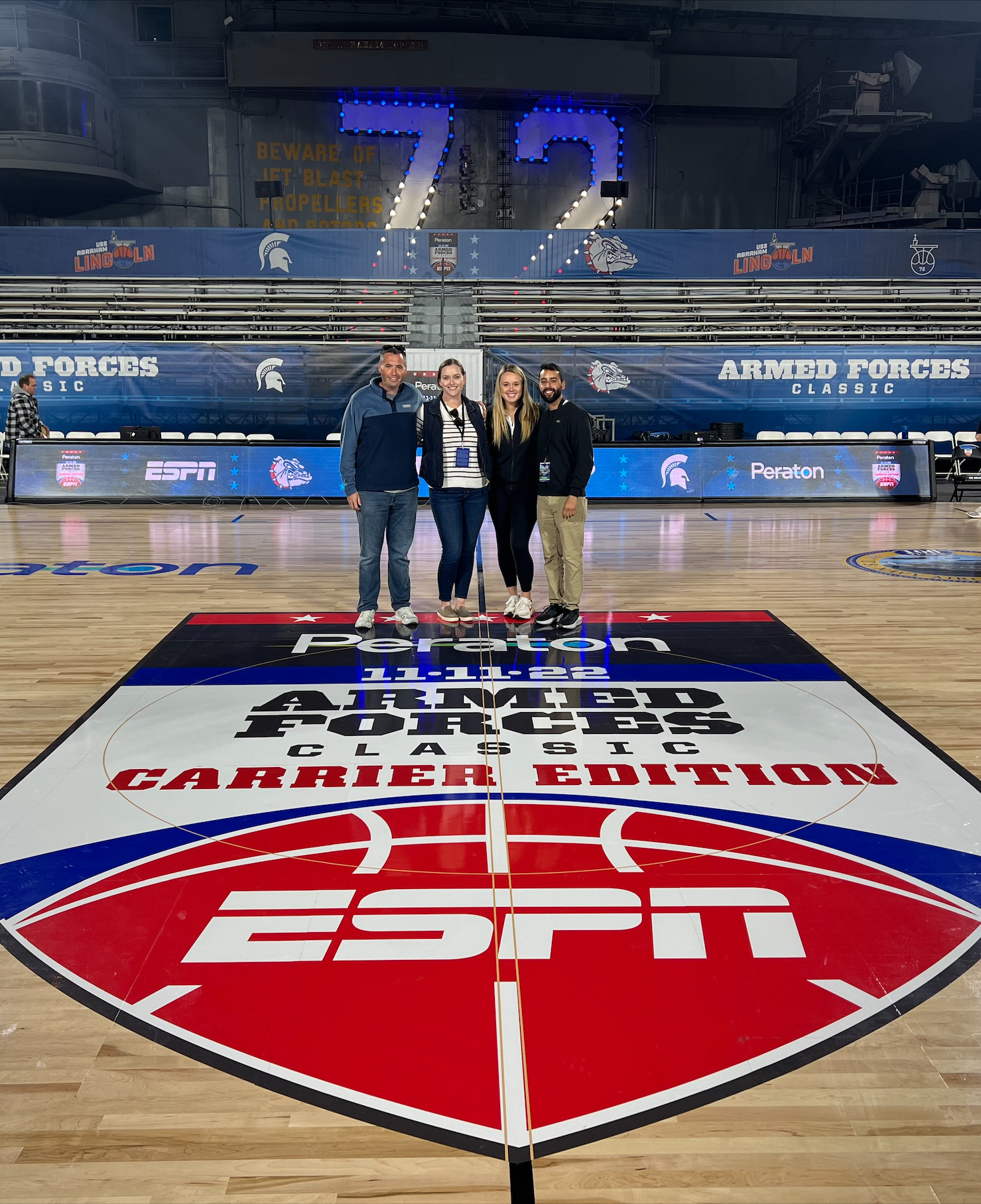 ”Overall, the Navy has never said no,” says Operations Specialist Michael Sullivan. “They’ve been fantastic partners, and they’ve been excited about this event and in helping us do whatever we have asked to do. It should be a pretty cool show.”

That’s not to imply that there aren’t exhaustive approval measures for a show like this in a military environment — especially when it applies to using RF frequency or putting equipment into airspace above an aircraft carrier. “But we’re on the most secure TV compound in history,” laughs Sullivan.

In a fitting touch to this show, Doug Holmes will direct. The current lead director for NHL at ESPN is returning to college hoops, taking the assignment after directing that successful Carrier Classic in 2011. He will be working alongside Producer Scott Gustafson. Also leading the production team are Associate Director Elizabeth Nowinski and Associate Producer Rob Duffy.

Despite all that’s new in this show — and while a lot has changed in the world since the last time ESPN broadcast that Carrier Classic in 2011 — Ciesler notes that there was still plenty to be learned from the old plans.

The production compound for the 2022 Armed Forces Classic is back on land just off the bow of the USS Abraham Lincoln. The show is anchored by NEP EN3 A and B units. (Photo: ESPN)

“A lot of it still applies,” says Ceisler, who notes that he has made four trips to the site since May in preparation for this game. “There are lessons to be learned and a lot of detailed records that we still have. Between the pier, the loading, the building, the protocols, and the partnership with the Navy, a lot that went on the last time it was played still exists. What I think we’re taking advantage of is adding some new toys and doing some different things on the deck that we weren’t allowed or technology wasn’t with us back then.”

Additionally, Sullivan believes that advances in production technology and, perhaps most important, connectivity has made this an easier event to pull off when compared with 2011. That’s not to mention that, the last time ESPN did this event, 3D was a part of the workflow — a welcome addition by subtraction to the anxiety levels at this year’s event.

Not to be overlooked, this event is entirely put on by ESPN, which means the full crew is responsible not just for the television production but for every element of hosting the game. That adds more responsibilities but does allow some multi-purposing of vendors. For example, a single power vendor — Illumination Dynamics — is supplying power to everything from the production trucks to the Musco lighting towers for the court, the scorers table, and the temporary videoboard on the deck.

The 2022 Peraton Armed Forces Classic tips off Friday, Nov. 11 at 6:30 p.m. on ESPN. Live from the flight deck of the USS Abraham Lincoln in San Diego harbor, ESPN will showcase the men’s college basketball matchup between No. 2 Gonzaga and Michigan State. Dan Shulman and analyst Jay Bilas will call the game from the flight deck with reporter Chris Spatola, a decorated U.S. Army captain who was a four-year starting guard at West Point before his 2002-07 active-duty service.