After Years of Planning, FanDuel TV Is Finally Here To Serve the Sports-Betting Fan

TVG Network’s relaunch as FanDuel TV in September was the culmination of years of planning and work that predated the pandemic. As the first 24/7 linear/digital network dedicated entirely to sports-wagering content, FanDuel TV and FanDuel+ extend beyond the horseracing-focused programming of TVG Network with a swath of live studio shows and multi-sport programming. 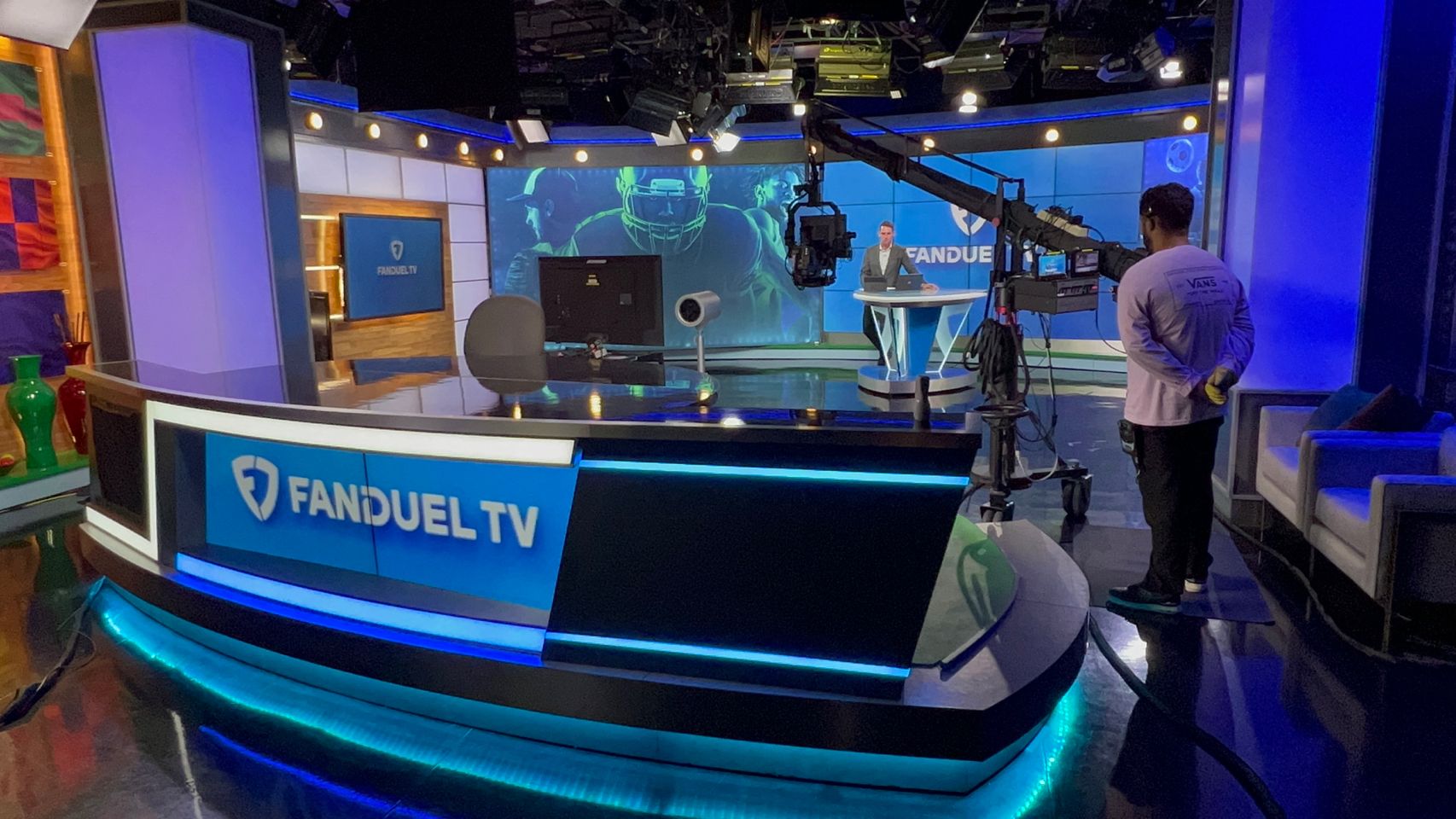 To make this happen, FanDuel TV Executive Producer/SVP, TV, Kevin Grigsby and his team rebuilt the network’s entire graphics package and overall on-air look, expanded the technical infrastructure at its existing Los Angeles studios, and expanded its distribution model beyond linear and into the OTT-verse with FanDuel+.

“We launched FanDuel TV on a very short timeline in a matter of weeks, but we’ve been building up to this and planning for it for years,” says Grigsby. “Whether it was expanding the backend of our [L.A. broadcast facility], diversifying our offering onto non-linear platforms, or looking at new forms of programming, this has been on our radar since 2018.”

Years in the Making: How FanDuel TV Came to Life

Prior to the launch, FanDuel and TVG, both owned by Flutter Entertainment, had collaborated on betting programming with shows like More Ways To Win and The Barstool Sports Advisors. However, the network’s relaunch as FanDuel TV took these efforts to the next level with not only a full on-air rebrand but a dramatically expanded lineup of betting programming.

“We presented this idea [of FanDuel TV] in January 2020 and were ready to move forward,” says Grigsby, “but, a few weeks later, the world turned sideways [because of the pandemic]. With all sports canceled, horseracing was the only thing going, and TVG was staying on the air to televise horseracing events. It just wasn’t the right time to consider a brand pivot. Then, after a year and a half of getting through the pandemic, we dusted off the strategy we had pitched, and here we are today with FanDuel TV living and breathing.” 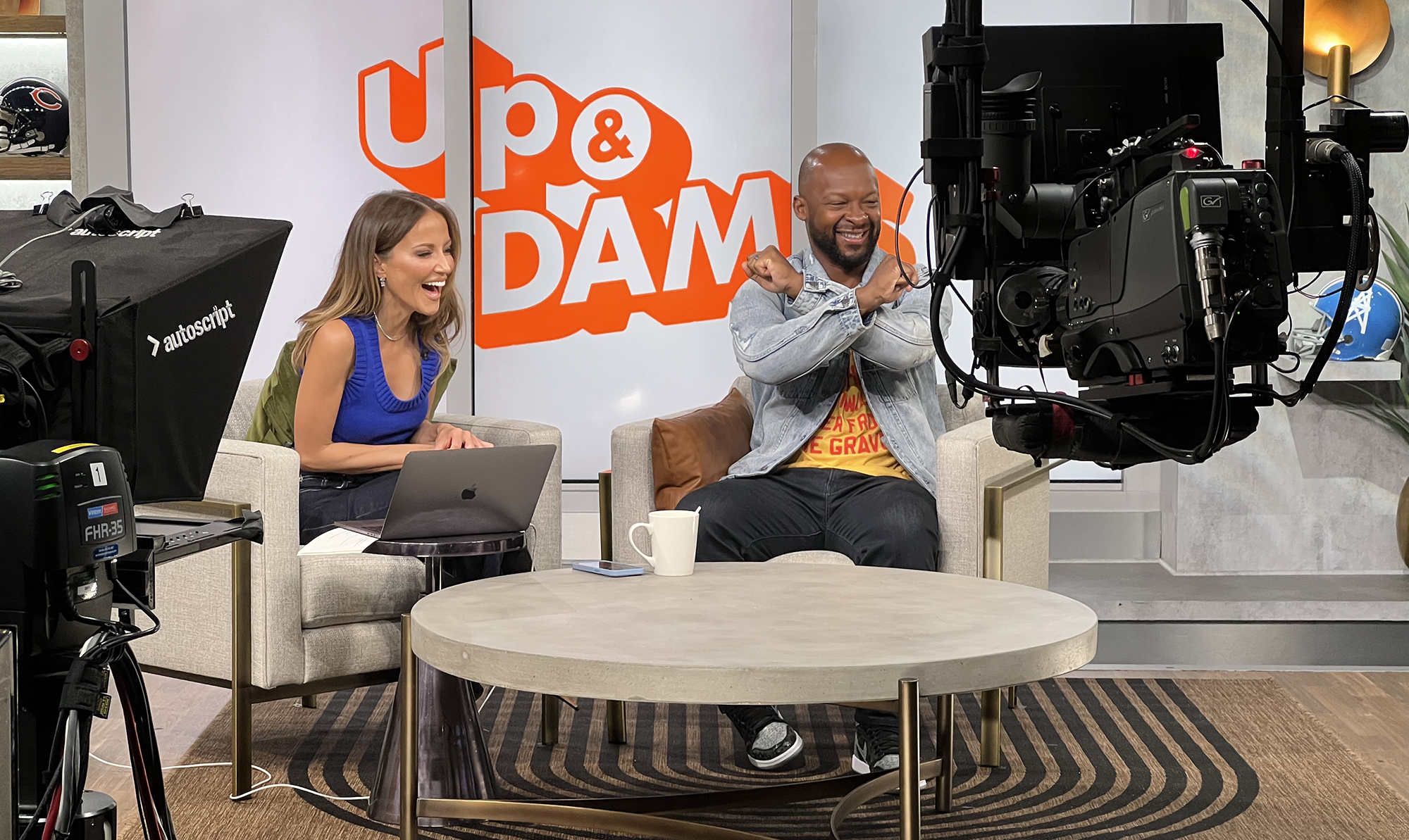 After the pandemic-fueled delay and months of long days and hard work, FanDuel TV has a full slate of daily programming on-air. Headlining the lineup is Up & Adams, starring former host of NFL Network’s Good Morning Football Kay Adams, and the NBA-focused Run It Back, hosted by Michelle Beadle, Chandler Parsons, and Shams Charania. Horseracing coverage and More Ways To Win With Lisa Kerney remain key cogs in the programming lineup, and content from The Ringer and Pat McAfee also is prominently featured.

In addition to the new talent in front of the camera, Fan Duel TV has brought on Jason Cahill (formerly of Fox Sports) and Richard Isakow (formerly of NFL Network) to oversee its sports programming and content department (as senior producer and producer, respectively), along with several other veterans of live-sports-studio programming.

FanDuel TV enlisted Devlin Design Group to help design and build an entirely new look for its studio shows. Prior to the network’s launch, Devlin worked on FanDuel TV’s large presence on Radio Row at Super Bowl LVI in L.A., and the partnership proved to be a winner. When FanDuel TV was looking to create the sets for its first new show, Up & Adams, Devlin was brought in. 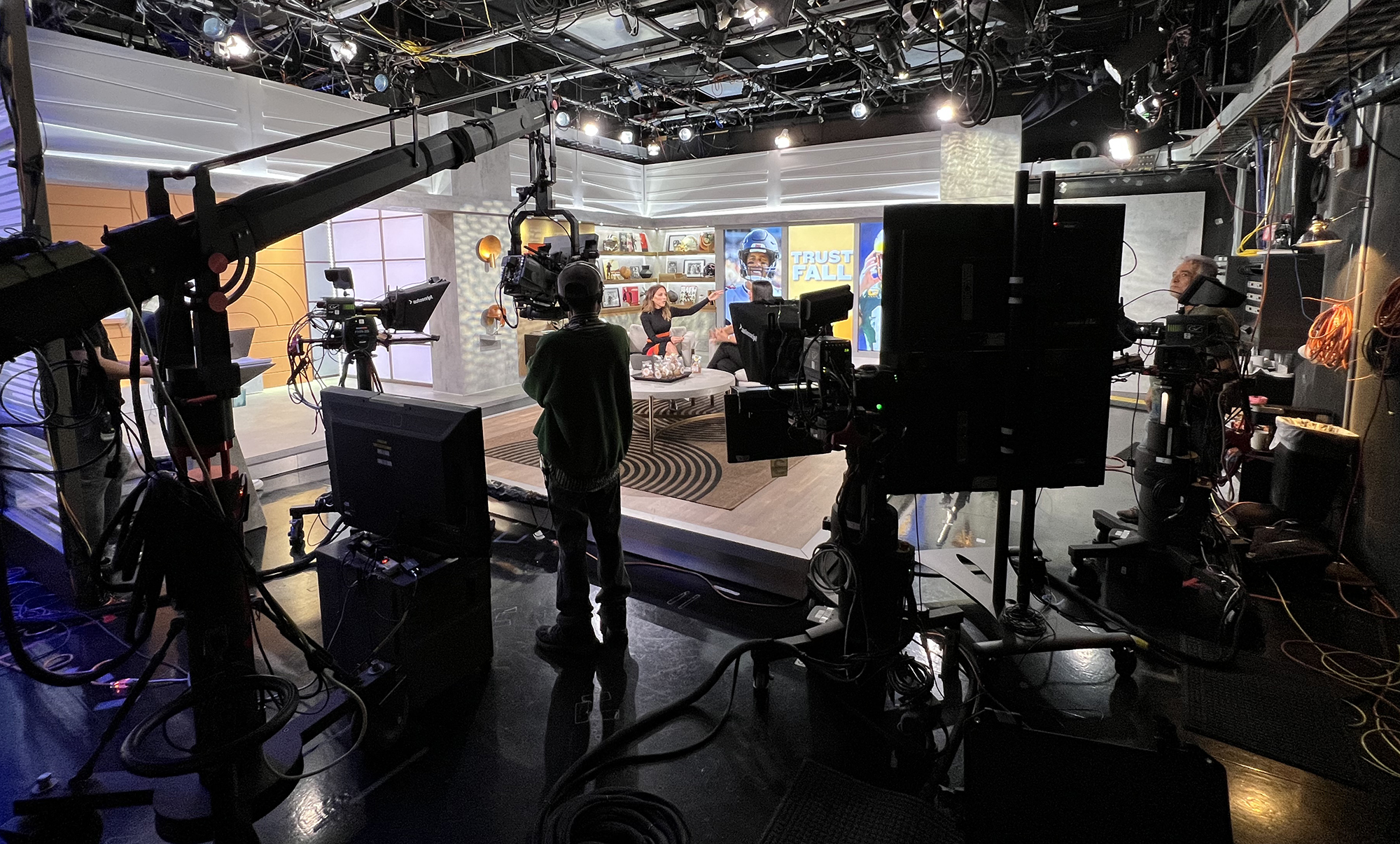 “First and foremost,” says Grigsby, “our set design was very horseracing-centric. For 23 years, we were the horseracing network, and now we’re FanDuel TV. Even though we still have a lot of horseracing, we want to be able to pivot to whatever [sport] we might be talking about at any given moment. When you tune in to our studio programming, we don’t want you to say, ‘Well, that’s the horseracing network talking about football.’ And Devlin has been a phenomenal partner in creating that [multi-sport] feel in the studio.”

A much more significant in-studio redesign — Grigsby estimates about 75% of the studio footprint — will take place following Super Bowl LVII in February and will include both aesthetic and equipment enhancements. 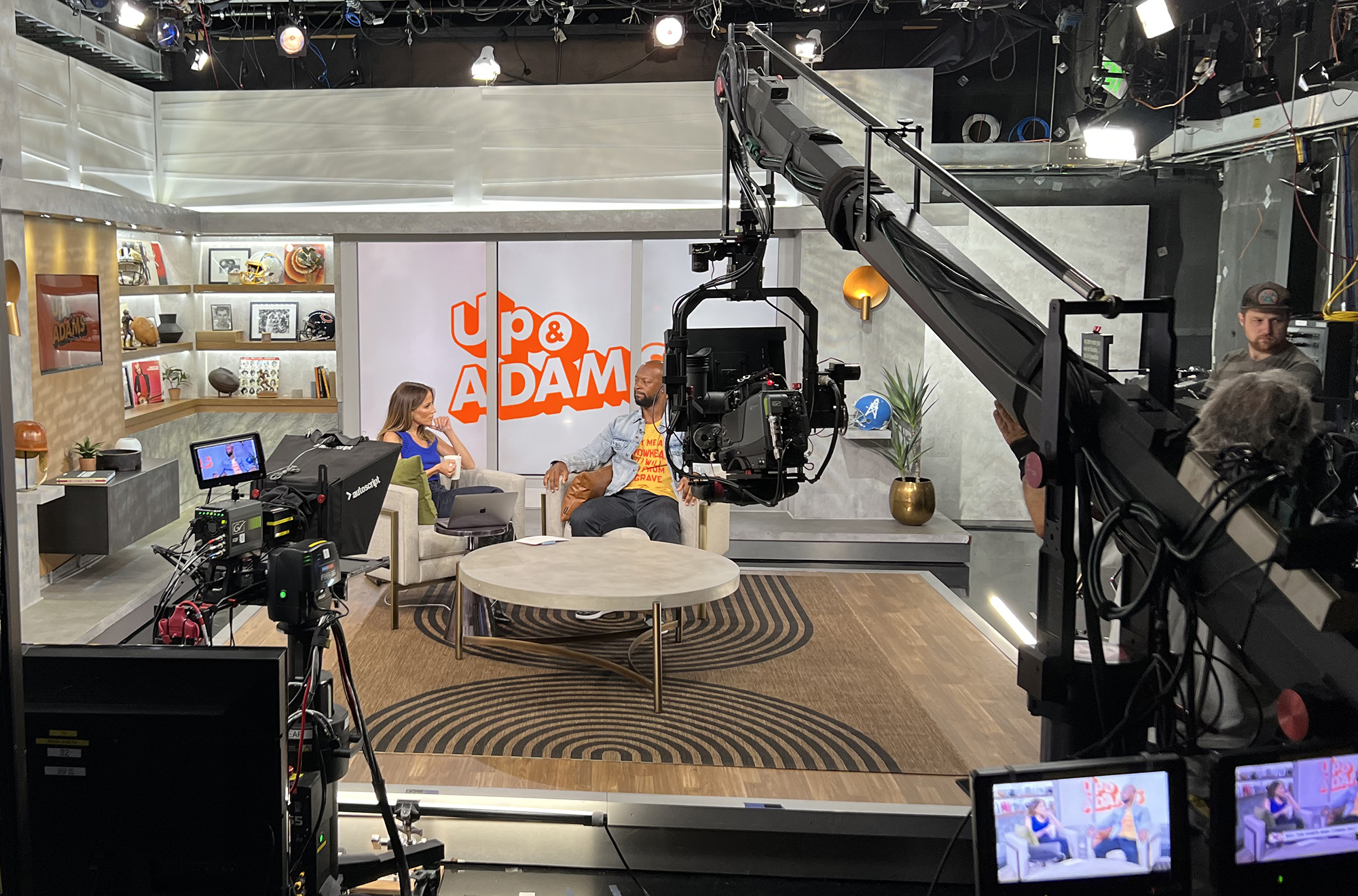 In addition to the current Up & Adams studio, FanDuel TV plans a studio renovation for the rest of the space following Super Bowl LVII next year.

In terms of the new FanDuel TV graphics package, Grigsby brought in Senior Art Director Belca Bedoya-Pedyna from ESPN to lead the design effort along with brand consultant Interbrand. On the operational side, FanDuel TV tapped Bannister Lake to develop a broadcast-image–management system with integrated data.

“Belca came in and worked with our FanDuel-brand team and Interbrand to upgrade the entire FanDuel brand, which included our television graphics,” says Grigsby. “We partnered with a company called Banister Lake to develop FanDuel’s first broadcast-image–management system with integrated data.

“It was quite a heavy lift,” he continues. “We had about 5,000 graphics that we had to change from TVG to FanDuel TV, including a lower-third crawl with sports-betting data integrated into it. It was one of the hardest parts of the rebrand that we had to endure, but it was all phenomenal work by the entire team.”

As FanDuel looked to expand beyond horseracing coverage, the in-house engineering team was tasked with expanding the broadcast facility’s technical infrastructure, diversifying programming, and gravitating away from 100% horse racing.

“I knew,” says Grigsby, “if we were going to scale up this television network and expand our content offering beyond horseracing, we were going to need to scale out the backend. From an operational perspective, we had to expand our router to be able to get additional feeds into our studios in Los Angeles, and we had to diversify the way that we were taking in signals.

“We also knew we would be rolling out production trucks everywhere,” he continues, “so we began investing in more IP-based solutions. Today, we’re continuing to look into new forms of transmission and diversifying the partners that we use to send those pictures back and forth.” 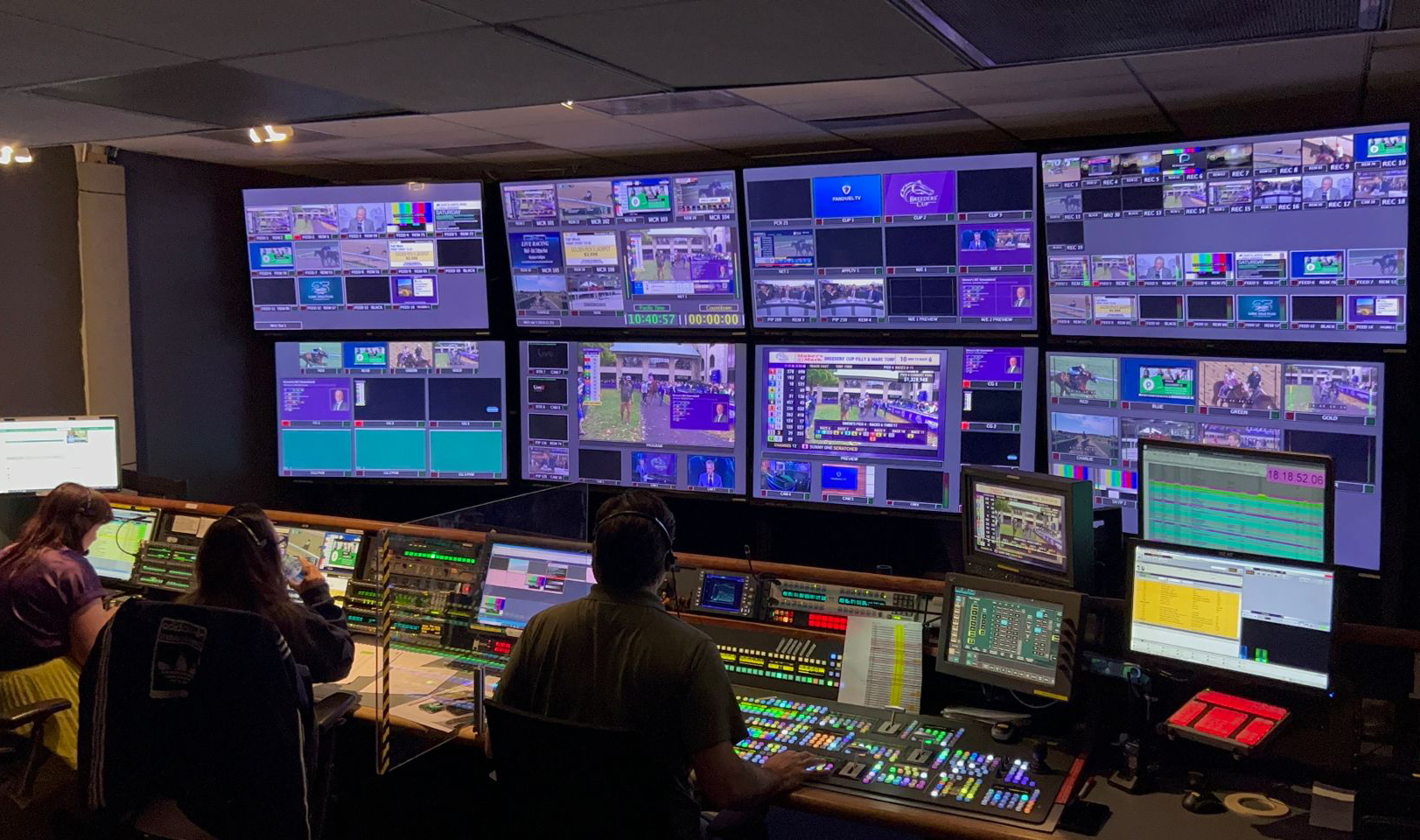 In addition, FanDuel TV continues to maintain TVG’s existing connectivity to all the racetracks in the country, as well as racetracks around the globe using several transmission vendors.

“What’s really important to us,” says Grigsby, “is that the latency is as low as possible, given how much is bet at the last second and betting stops the second a race starts. You can’t have those pictures 10, 20, 30 seconds behind real life. We’re always demanding the lowest possible latency from our transmission partners, and we’ll continue to innovate on that.

“Picture quality is also key,” he continues, “because you don’t necessarily get the best out of some of these racetracks. Now that we are FanDuel TV and have all these phenomenal and graphics [on-air], we want to make sure the quality of the picture matches the quality of the content. So we’re always pushing for better [picture] quality as well.” 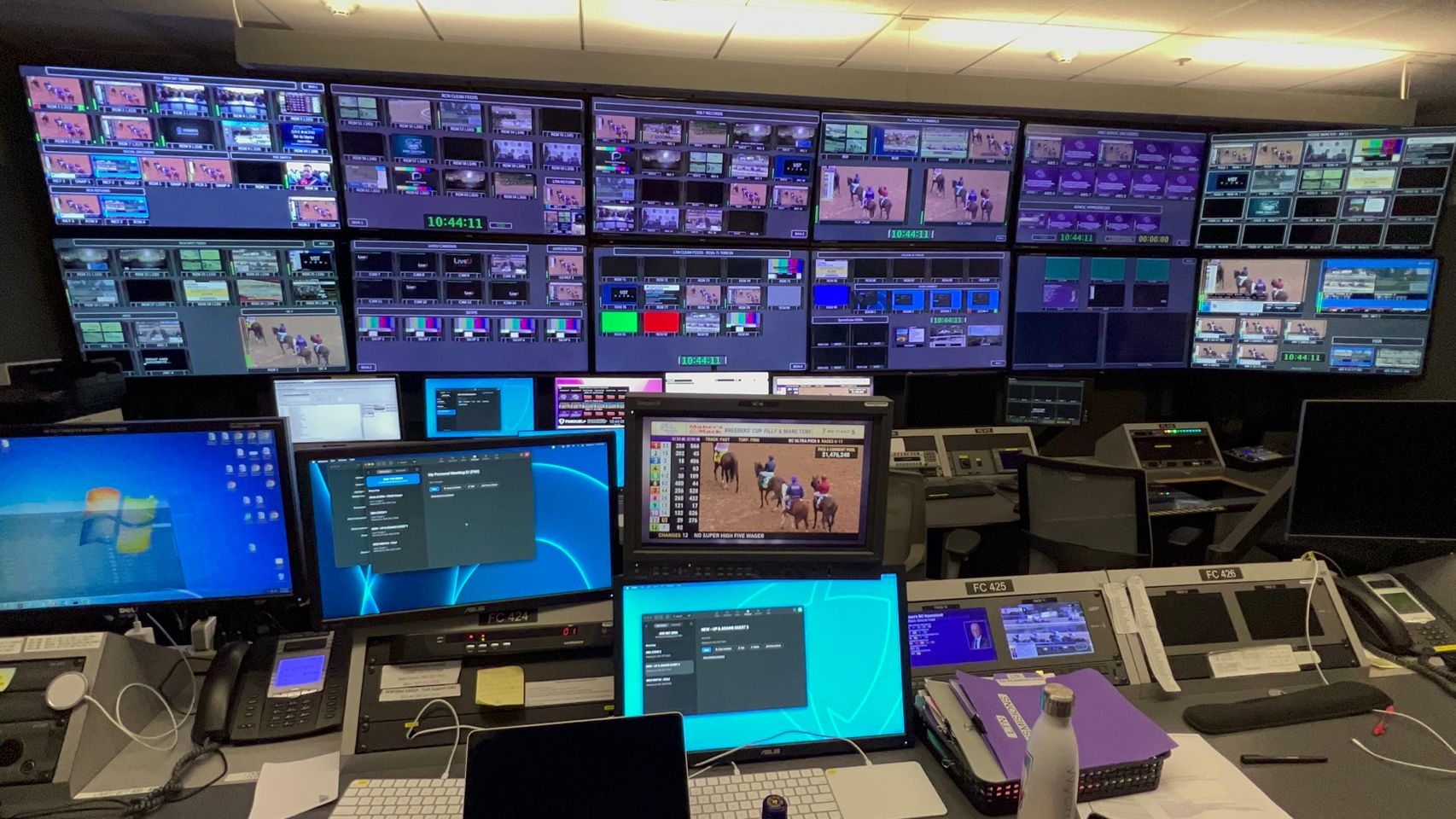 FanDuel TV is also exploring more broadcast-quality solutions for remote interviews from people’s homes, as well as from stadiums and practice facilities.

“Integration of live remote guests is a huge part of what we do now,” says Grigsby. “What the pandemic taught us is, you don’t have to get a sat truck anymore; you can just get someone on Zoom and put them on TV. That’s a phenomenal learning from the pandemic — which everyone learned, not just us. Now we are looking to incorporate technologies into our day-to-day workflow that can take that to the next level.”

On the distribution side, FanDuel TV is running proofs of concept for monitoring of both linear and OTT and has partnered with Sencore, Skyline Communications, and TAG Video systems to manage the tasks with as much automation as possible.

“Monitoring is a big deal for us,” Grigsby points out. “I don’t want to wait until someone on Twitter tells us their TV channel or their stream is not looking good. I want to be the first to know if there is a hiccup in the system. That’s important to us, and we’re continuing to make an investment.”

The Data Factor: Integrating Real-Time Betting Info Into the Broadcast

Nowhere is real-time data more essential than in betting, and FanDuel is aware of this when integrating betting data into its broadcasts. Today, FanDuel TV receives data from nearly a dozen sources, aggregates it, and develops it into formats that can be used across every one of its shows on FanDuel TV and FanDuel+. 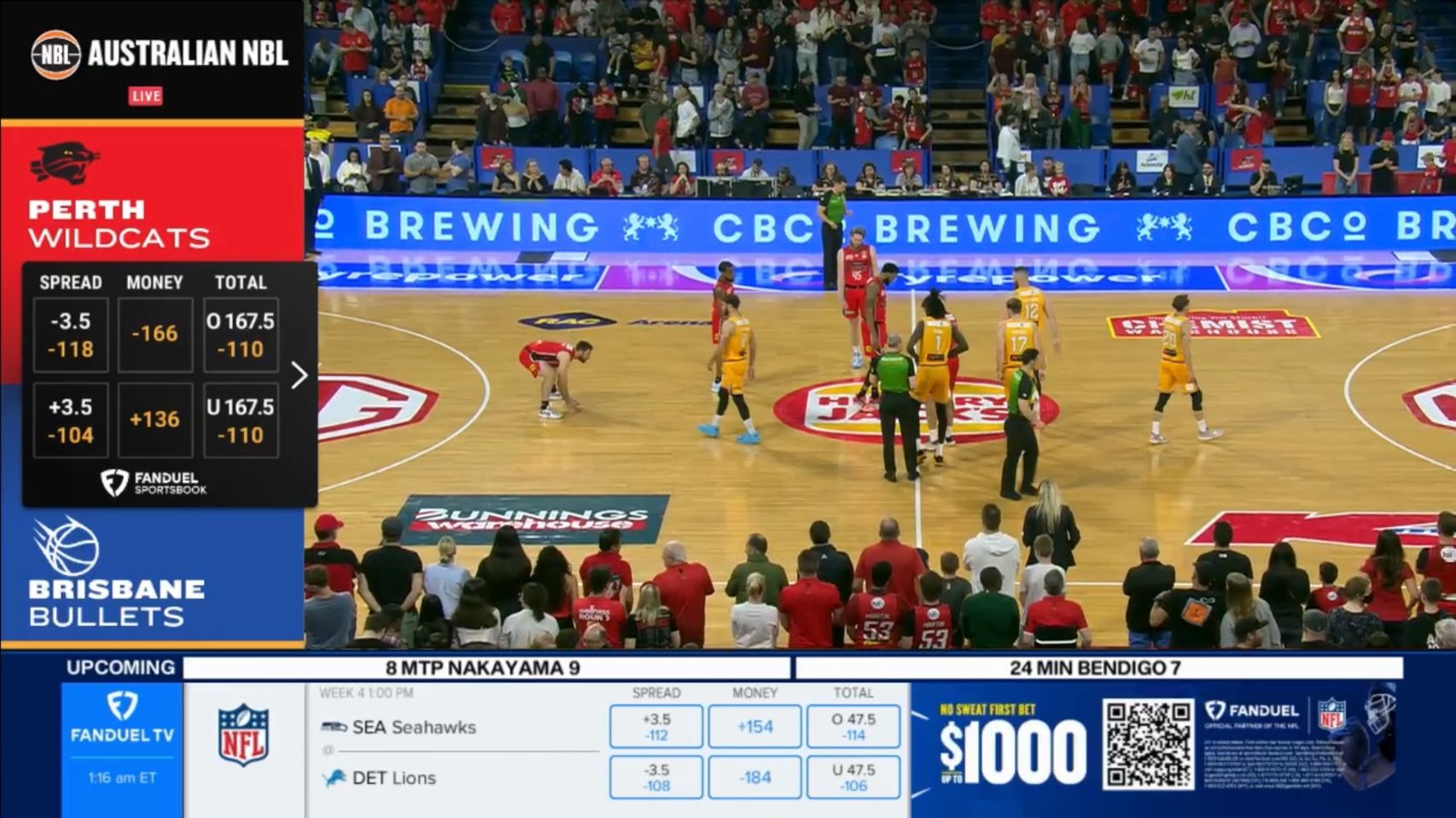 In addition, TVG Network already had a workflow for integrating horseracing data into its live broadcasts in real time, and that system is available to all customers betting on horseracing nationwide. With the relaunch, that established data workflow was simply extended into the FanDuel Sportsbook APIs.

“Essentially,” says Grigsby, “what you see on screen from a betting perspective are the same industry-leading betting lines that you can see and bet on within the FanDuel Sportsbook app in the 17 states [where sports-betting is legal]. Integration of that live data into our broadcast with visualization attached to it is very important to us. It’s definitely our secret sauce and how we differentiate ourselves from general sports networks.”

At nearly three months old, FanDuel TV boasts a solid weekday lineup of Up & Adams, Run It Back, and More Ways To Win. And Grigsby and his team are concentrating on the biggest sports event of all: Super Bowl LVII.

“Our footprint at the Super Bowl in Arizona is going to be phenomenal,” he says. “We learned a lot last year, and we’re going to be at Radio Row all week with Kay Adams, Pat McAfee, Lisa Kerney, and some other big names. For the second year in a row, we are going to have a huge Super Bowl party that will have a big-name musical act. We couldn’t be more excited for Super Bowl.” 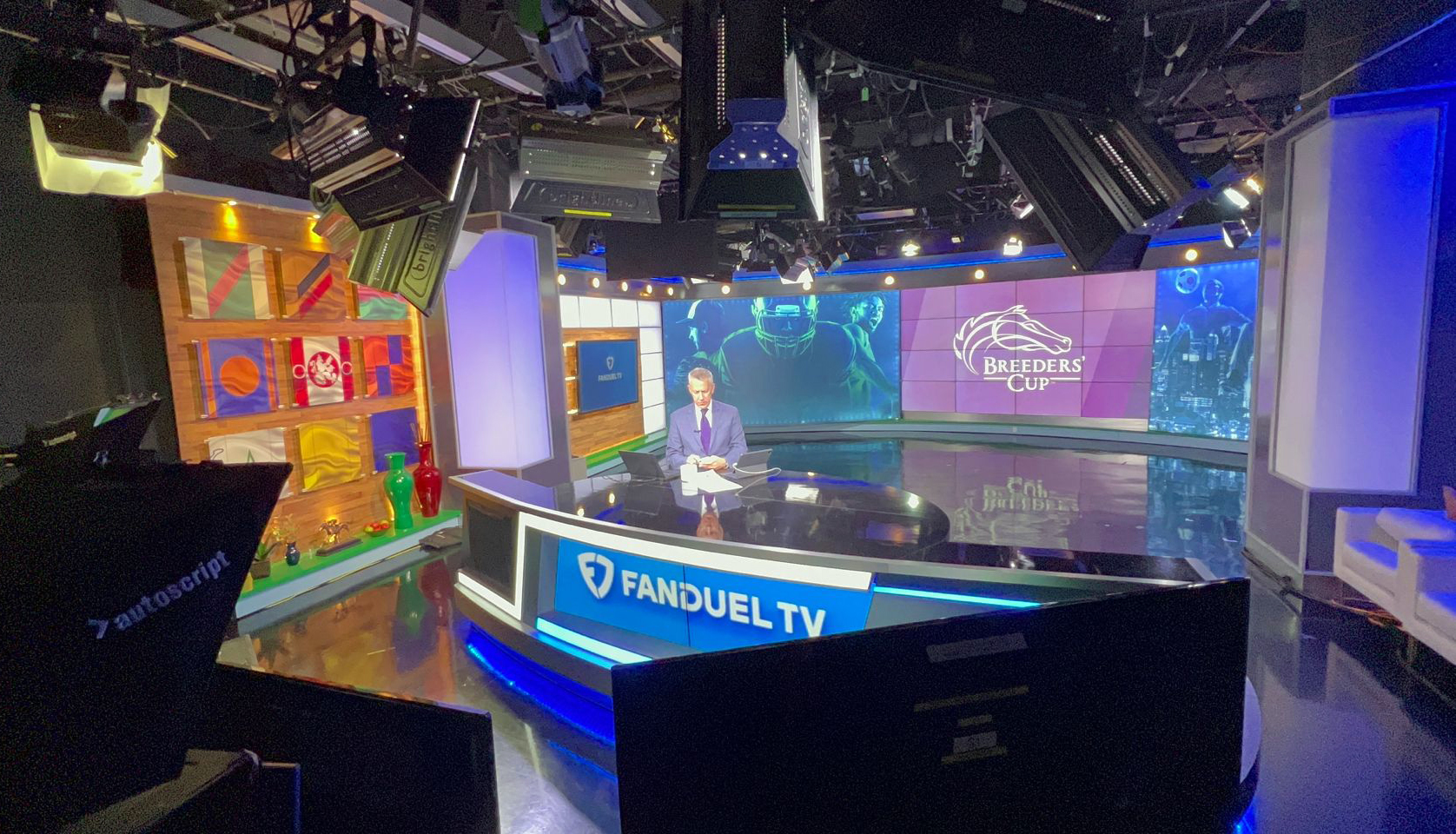 Although much of the focus at FanDuel TV has been on expanding beyond horseracing, the sport remains integral to its programming strategy. Grigsby says that horseracing betting will be fully integrated into the FanDuel Sportsbook App by the end of the year, opening up a massive new prospective audience for the network. In addition, he sees a major opportunity for live horseracing programming to draw in new betting-focused viewers during the daytime hours.

“I feel that horse racing has a phenomenal opportunity in the middle of the day, when mainstream sports are not playing and there is nothing to bet on,” he explains. “Horseracing has this amazing ability to own the day until your baseball, hockey, and basketball games start [in the evening]. With horseracing in the FanDuel Sportsbook [App], which is the biggest sportsbook in the U.S. and, with us [broadcasting] races every day as we have for two decades, that’s something I’m looking forward to from a viewership and business-monetization perspective.”