The National Hockey League today announced an extensive format change to the annual esports initiatives played on the EA SPORT NHL game title. The tournament, now in its sixth season, has been rebranded as the EA SPORTS NHL 23 World Championship™.

Players and fans will have the opportunity to engage with more NHL esports content than ever before under the tournament umbrella – including live Twitch streams, Club tournaments, in-person events and NHL player content, with an official World Championship making its triumphant return in June coinciding with the 2023 NHL Awards and 2023 Upper Deck NHL Draft.

“Expanded programming in NHL markets and participation from all 32 Clubs has always been our ultimate objective as we continue to grow the NHL gaming ecosystem”, says Chris Golier, NHL Group Vice President of Business Development and Technology Partnerships. “As we head into the EA SPORTS NHL 23 World Championship season, we are excited to provide more global opportunities for players to compete at the highest level, more consistent social engagement across NHL platforms and the culmination of funnel tournaments at NHL signature events to showcase the skills of our players to our enthusiastic CHEL community.”

Registration for the EA SPORTSNHL 23 World Championship and ancillary events begin on Thursday, December 8. Players and fans can stay up-to-date and follow all the action on the official tournament website, www.nhl.com/NHL23, and on social platforms using the #NHL23WC hashtag.

The Club Championship component of the tournament will add 32 prominent events to the calendar and allow NHL Clubs to expand their gaming presence, engage a younger audience and crown an EA SPORTS NHL 23 Club Champion. All NHL Clubs will host an esports tournament where the winner will receive prize money and an automatic bid into the EA SPORTS NHL 23 North American Championship knockout round.

EA SPORTS’ new cross-platform matchmaking ability will enable players to square off against opponents on the same console generation, creating larger player pools and shortening queue times to ensure players have more options to face off and spend less time waiting to take the ice. Each ancillary event will produce two winners – one from each respective console generation (one from PlayStation4 / Xbox One and one from PlayStation5 / Xbox Series X|S) – who will then continue play in the EA SPORTS NHL 23 World Championship draw. This will give players more chances to play, qualify and win, and fans more touchpoints to the CHEL community.

The new tournament structure will see the NHL also host a new slate of online open tournaments in North America and Europe with finalists having the chance to attend an in-person final event during NHL North American signature events, including the 2023 Honda NHL® All-Star Weekend and 2023 Navy Federal Credit Union NHL Stadium Series.

The new EA SPORTS NHL 23World Championship word mark and logo can be downloaded from the NHL’s Brand Management Site (BAMS) – a password protected digital library and communication vehicle for NHL creative and brand marketing resources that serves as a one-stop provider of NHL logos and creative files used by the League. Downloads are offered in all relevant file formats, including .eps, .pdf, .jpg and .png. 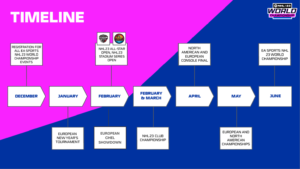 Each NHL Club will host an in-person or online tournament using a format of their choice, so long as only one player is designated the Club Champion – and therefore only qualifying one player as the EA SPORTS NHL 23 North American Championship Club representative.

In-person events for the North American Championship, European Championship and World Final will be played solely on the PlayStation5 console.

As part of the multiyear relationship, DreamHack Sports Games (DHSG) will continue producing hockey’s premier esport events with the NHL through production of compelling content, live streams from tournaments, and influencer-driven competitions.

For the third consecutive year, Battlefy will serve as the Official Tournament Platform and League Operator for all competitions that fall within the EA SPORTS NHL 23 World Championship umbrella, providing seamless registration in multiple languages and a content hub that will allow fans to follow the 2022-22 gaming season in real time. On competition day, Battlefy supports our global player base with access to real time support & referees, creating a frictionless experience for the tens of thousands of fans that descend upon the virtual rink.