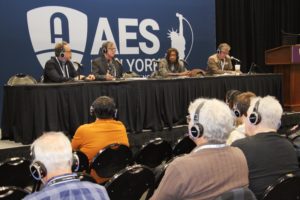 With registration for the co-located 2022 NAB Show New York drawing a combined audience of 16,500+ content creation professionals, AES New York 2022 offered an array of audio engineering events and learning opportunities highlighting the past, present and future of audio. Alongside the AES New York Convention’s wealth of cutting-edge presentations and workshops, attendees were able to catch up with the latest tech gear and services from over 100 brands on the show floor.

Several prominent audio manufacturers took their AES New York presence to the next level, hosting a variety of exhibition floor events and opportunities that exemplified the industry’s support and encouragement for the current and up-and-coming audio professionals, students and enthusiasts who packed the aisles. Two such attractions were the Avid Partner Pavilion, which showcased the latest workflow and capability-extending technologies from Avid partners, and the Media Over IP Pavilion, which hosted demonstrations and solutions hosted by the Alliance for Media Solutions (AIMS). Emphasizing their commitments to the next generation of audio professionals, JBL generously provided an extensive monitoring system for the Student Recording Competition and additional sessions requiring high-performance playback, while Genelec sponsored the Convention’s Education Center area. 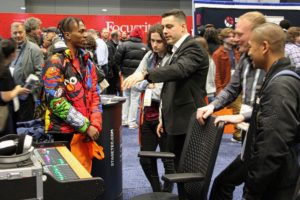 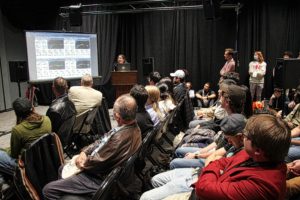 “Our enthusiastic and ever-supportive industry partners and sponsors have truly, once again, made the AES Convention an unparalleled experience,” enthused AES New York 2022 Convention chair Jonathan Wyner. “From inspiring and motivating our AES Student Members to audio demonstrations that explore the cutting edge of today’s technology and offer glimpses into audio’s future, the AES is proud to be a converging point for technology, creatives and audio engineers of every facet. A huge shout-out to JBL and Neumann for creating phenomenal listening spaces in the challenging environment of a convention center. We are truly thankful for the crucial support of all of our partners and can’t wait to build an even bigger AES New York 2023 on this year’s success!”

2023 will mark 75 years since the Audio Engineering Society was founded, and it heads into its 75th anniversary year with an impressive event schedule that builds on the New York Convention’s momentum with three hot-topic-focused international conferences and two international conventions, including a return to Manhattan in October 2023: