The UK arm of Creative Technology is moving to an IP-based model and has upgraded much of its technology to facilitate this. As part of that move, the rental company has made a large investment in RTS equipment to ensure its intercoms would be IP-based. 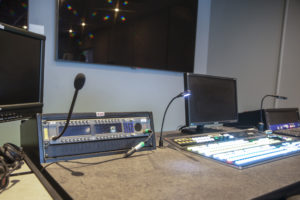 “We’re making a very big investment in IP this year and are looking at the next generation of signal distribution – we have chosen ST-2110 as a platform for that,” explains Sid Lobb, Head of Vision and Integrated Networks at Creative Technology. “It’s part of a direction of investment that is heavily biased towards IP.”

Two key reasons were behind this decision. Firstly, NEP Group’s US operation has a large inventory of RTS equipment, and secondly the company found its existing RTS solutions to be extremely flexible when in use during the pandemic lockdowns.

“From our experiences over the pandemic, particularly with large virtual contribution TV shows and conferences with massive amounts of IFBs and returns and everything else, the Dante workflow that comes as part of OMNEO* with RTS was a key enabler for us being so flexible in pulling in lots of virtual contributions,” recalls Lobb. “When we were looking at what we were going to do during our summer deliveries and what we needed to invest in, RTS came out as a clear winner in terms of flexibility, and also in terms of group consistency. “The NEP Group has a massive inventory of RTS kit already; a lot of that is built into facilities, but there’s also a fair amount – particularly in America – that can be rented out for large events, allowing us to scale up as needed,” he continues. “What we wanted to do was create a similar kind of inventory that will be Europe-based, product that can support the rest of the group when they are delivering large events over here.” 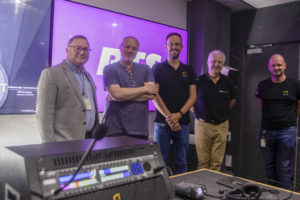 The flexibility inherent in RTS products continues to be a major benefit for Creative Technology. “We have a number of ODIN matrices and we initially bought them with 16 ports, because we needed small matrices in different modules,” recalls Lobb. “However, when our requirements increased, the licensing option made it easy to upgrade from 16 to 32 or 48-ports – all in the same hardware platform. In addition, there are considerations like additional redundancy – it’s a direction we’re already taking with both our video and our audio distribution, and now comms is being interwoven into that, because it’s such an integral part of every show we do.

“The new Digital Beltpack is a big new thing for us. It can serve as a simple four-channel beltpack in partyline mode or used as what is essentially a four-channel matrix panel. It can be connected to a PoE switch allowing up to six to be daisy-chained together. That functionality in that form factor is really useful.”

Another unique RTS technology that is adding value to CT Group’s workflows is RVON (RTS Voice Over Network) – a proprietary VoIP technology for RTS intercoms that uses standard Ethernet, allowing users to communicate globally over the public internet with no distance limitations or latency issues.

“We hadn’t used RVON (RTS Voice Over Network) very heavily in the past, but recently it has been a real problem-solver, and very simple to work with”, adds CT Group’s Dallas McIntosh. “There were issues with the network at a recent location meaning that we didn’t have enough ports available to work with OMNEO and then I remembered that I had 16 channels I could use on a matrix equipped with RVON cards. That was a real eye-opener and I’m a real advocate of RVON now.” 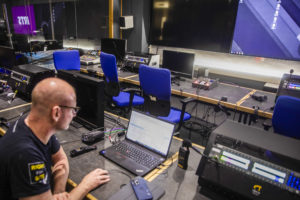 The first major use for the new investment came with a large multi-sport event that took place over the summer in Birmingham. “We provided an ST-2110-based IP infrastructure for all signal distribution,” says Lobb. “This is something that we’ve been investing in for a while now and we were looking for a comms system that could piggyback onto that infrastructure and investment. The fact that we can now link together all the different nodes around a venue and have matrix-level comms interfacing with the broadcast is really important to us. We designed an ST-2110 network that we had full control over and transported most of the media requirements around venues.”

With a successful first use, Lobb is clearly satisfied with the investment that has been made. “It’s the flexible ecosystem that’s so useful to us in rental. It’s the different form-factors, it’s the four-channel beltpack, it’s the 1U 16 panels, the 2U 32 panels – all of that’s really useful, but then you add on things like the commentary panels that just all work natively with OMNEO, it’s a really powerful offering for an ecosystem of products.”