There’s the idea that studio coverage needs to create its own environment, and then there’s the philosophy of Fox Sports’ remote studio operations at the FIFA Men’s World Cup in Doha, Qatar. Blending unique applications of creativity and technology with the natural and man-made beauty of the city, the broadcaster has developed four sets along the Doha Corniche, the 4.4-mile waterfront promenade that hugs Doha Bay.

“We put a lot more attention into not only being correct or architecturally appropriate into the area but making [our sets] shine,” says Rod Conti, VP, remote studio operations, Fox Sports. “It has definitely become the star of our shows.” 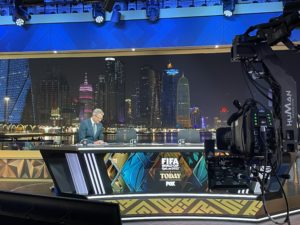 Mesmerizing fans at home with bright lights, swooping shots, and bursting energy took two years of planning, planning, and execution by the Fox Sports team. As the city of Doha rose to meet the gargantuan expectations of hosting an event like the FIFA World Cup, Conti and his team chose a location that would identify for viewers what city the tournament is being played in. For past events, this meant choosing St. Basil’s Cathedral in Red Square for the 2018 FIFA Men’s World Cup in Moscow or the Eiffel Tower for the 2019 FIFA Women’s World Cup in Paris. Unlike those two cities, however, Doha is only 127 years old and still developing into the modern age. The crew had some searching to do. 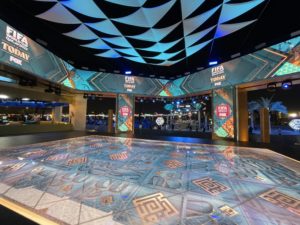 “When we came to Qatar, they didn’t have [an iconic location] that stood out since it’s a fairly new country,” says Conti. “When we were looking around for different options, which involved the Souq Waqif, Al Bidda Park, and the museums, we understood that this is a country on the move when we saw the downtown skyline. We’ve seen it grow incredibly, and everything started to come to life very quickly.” 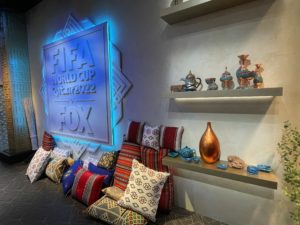 Working closely with the Supreme Committee for Delivery & Legacy, a Qatari-run group that oversees delivery planning and operations for the 2022 FIFA World Cup, Fox Sports zeroed in on the Doha Corniche: a popular meeting place for locals and tourists alike that provides tantalizing vistas of the skyscrapers and the Doha Bay section of the Arabian Gulf. Since the skyline is continually growing vertically, Conti and VP, Field Operations and Engineering, Kevin Callahan wanted to marry this burgeoning town with its roots. 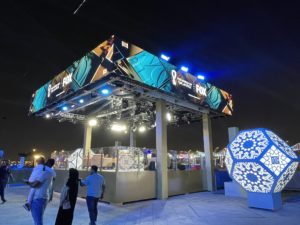 A digital-only set is opposite of the main structure.

“We took the dhow boats, which we noticed were an older part of their pearl-diving history, and we said, ‘You know what? The contrast of the old and the new might be the backdrop,’” adds Conti. “We saw this picture in our heads and knew that we wanted to have this spot.”

Pen was put to paper, and conceptualizations became drawings. Collaborating with Los Angeles-based |drive| studio, Fox Sports EVP/Creative Director Gary Hartley and Art Director Johnny Cho produced the final blueprint for the project. Aiming to showcase the culture and daily life of the host nation, the pair made sure to feature work of local artists on the building’s exterior and integrate symbols and iconography: rectangular flags on the ceiling to honor the Qatari passion for falconry, Persian pillows and tapestry, hand-made pottery, and desert rose, a rose-like crystal that can be found in-country. 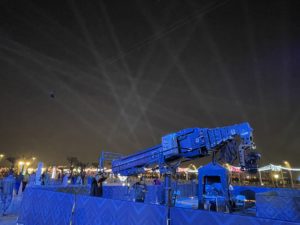 A Flycam and Technocrane 22 are deployed at the Doha Corniche.

Planning transitioned into real-world construction in the latter part of 2022. With the set pre-built in Fox Sports’ Charlotte, NC, facility and shipped overseas in 46 containers, operations shifted to Doha in mid September. As the sets were installed and put into place, the home of the onsite production team — a control room positioned within a temporary compound a few hundred feet from the sets — needed to be built as well. That project started on Oct. 1 and was completed on Nov. 10, 10 days before the competition’s opening match between Ecuador and Qatar.

Inside the Design: Accounting for High Winds, Meshing AR With LED Floor 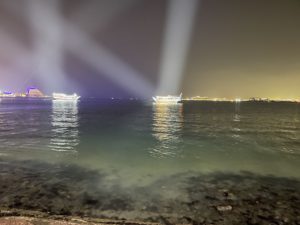 With a beautiful vision, the broadcaster faced several challenges with the locale. With massive expanses of desert surrounding Doha, rain isn’t part of the weather forecast, but high-intensity winds are. Although the windiest part of the year is February with an average speed of 10.9 mph, average speeds can reach 9.3 mph between Nov. 14 and April 15. Given a breeze from a large body of water and loose sand from the country, Conti deemed it necessary to have fail-safes and called in Filmwerks, Fox Sports’ partner on other remote builds this year: the NASCAR Clash at the Coliseum in February, the 2022 Daytona 500 two weeks later, and MLB at Field of Dreams. Responsible for overall construction of the full 148- x 33-ft. footprint, Filmwerks implemented a system of glass windows that would block the wind and prevent debris from entering the set.

“Every wall can be covered and protected within 30 minutes with our sliding system,” he points out. 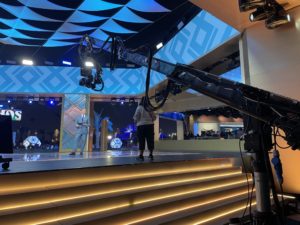 Alexi Lalas shoots a segment with a Technocrane 45.

With questions about the wind answered, the finished product has turned into an expansive presence featuring non-conventional shapes and workflows that have elevated every show. Each of the four spaces has its own distinct purpose. For example, a digital-only structure has become a priority at this year’s World Cup. Headlined by DaMarcus Beasley, Jimmy Conrad, Melissa Ortiz, and Sacha Kljestan, hours of FIFA World Cup Now content offers guests on a location that encourages social-media users to flock to the network’s linear outlets with a glimpse of the set opposite the main structure.

Another space is reserved for FIFA World Cup Live, a show that sets the table for the day’s matches in a more conversational backdrop. Next is an LED-centric set, a portion of which is dominated by seven Penta Center interior screens and an all-LED floor. Driven by displays provided by Creative Technology, which has an office in Doha, the cast of FIFA World Cup Today and FIFA World Cup Tonight bend the traditional norms of studio shows. Deploying the LED floor, Stype camera tracking on a Technocrane 45, and Unreal Engine, shows have leveraged augmented-reality graphics for different segments of the show, including presentation of starting lineups, player demos, and sponsorship messaging. 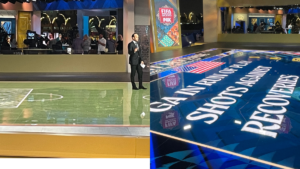 “It’s playing an instrumental role in everything we do and adding to the experience,” says Conti. “When you start looking at the versatility of the technology, [the investment] pays for itself.”

At the main desk are Rob Stone, Landon Donovan, Alexi Lalas, Clint Dempsey, and Maurice Edu (along with rotating personalities Kate Abdo, Carli Lloyd, Eni Aluko, and Kelly Smith) in front of a background of the Doha skyline. With the well-lit edifices and the massive LED real estate on the pentagram-shaped space, the team weren’t sure whether the screens would be the highest-quality with the best clarity. 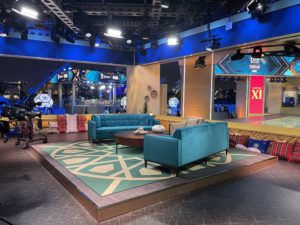 A conversation-style set is amongst the four spaces.

“We had contingencies, so we made a hard print for the floor for the day hours,” says Conti. “We didn’t know how the technology would hold up with the sun, but we’ve gotten good texture out of them. We don’t normally [broadcast outdoors] at night all the time, so, when we knew that we’d be broadcasting more at night hours, it was a great opportunity.”

The massive studio has its own dedicated production-control room nearby, which handles FIFA World Cup Today. According to Director, Remote Studio Engineering, Greg Pfeifer, the production-control room at the Corniche studio has a Calrec Apollo and an Artemis mixer, enabling the studio show to have a main mix and a submix. EVS servers and graphics gear onsite to minimize latency are controlled by operators in Fox Sports’ Pico facility in Los Angeles and need to send only command signals.

“The main studio show is cut here and produced here,” Pfeifer says. “FIFA World Cup Tonight is more of a remote show with eight cameras sent back to Pico, where they cut the show. But the early-morning pregame shows and FIFA World Cup Today are cut here.” 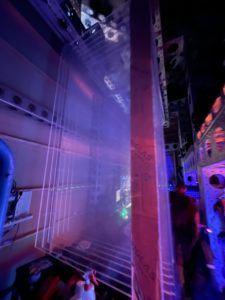 Filmwerks installed a sliding system of glass to prevent high winds and debris from getting inside.

Whether the production is being powered by a team in Doha or in the U.S., the crew has a ton of equipment at their disposal. AR implementations are capturing fans, but the 19-camera complement also has a Flycam system that stretches across Fox Sports’ area of the Corniche, a Technocrane 22 at the digital set, a main-stage jib, a Steadicam, and K-array speakers disguised as ornate pillars to not take away from the aesthetic.

There are still two weeks left in Qatar, and, although this tournament is of utmost importance, Fox Sports is about to embark on a very busy seven or eight months. Major events on the broadcaster’s calendar are Super Bowl LVII at State Farm Stadium in Phoenix in February and the 2023 FIFA Women’s World Cup in Australia and New Zealand in July and August. Also on the schedule are the 2023 World Baseball Classic in March, the 2023 United States Football League season from April to June, the 2023 MLB All-Star Game in Seattle in July. The production team is planning for Super Bowl LVII and the next FIFA Women’s World Cup while producing the World Cup in Qatar.

“Aside from the heat, I think that sliding this [World Cup] to November when we’re extremely busy was the hardest part of the job,” says Conti. “The Super Bowl is no small show, and we’ve made two visits [to Australia and New Zealand] while we’re here in Qatar for some scouting. There are a lot of wheels spinning right now.”

The World Cup Group Stage meant long days and nights for the remote studio-show team, but now the World Cup is in the Knockout Stage with 16 games in 16 days. While the crew finishes up in Qatar, Conti is already looking towards the biggest game on the NFL calendar.

“The World Cup is like the Super Bowl in that it just grows and grows, but, at the Super Bowl, when you get tired. it’s time for the Big Game,” says Conti. “But here, it starts heavy, and then we start seeing a few dark days. By the Final, we’re pretty rested and ready to go.”