YES will serve as production entity for ESPN2, FS1, its own telecasts at Basketball HOF Invitational

There is no shortage of early-season tournaments on the college-basketball calendar this year, but none have the complicated production workflow of the Basketball Hall of Fame Invitational at Brooklyn’s Barclays Center this Sunday. Although three networks — ESPN2, Fox Sports 1, and YES — will televise the four-game lineup, YES will produce all four games. It’s an arrangement rarely seen among either national or regional sports networks.

“In my 40 years in the business, I’ve never done anything quite like this,” says Woody Freiman, VP, production and programming, YES Network. “There have certainly been similar [scenarios]: I remember, back at The Baseball Network, we would do a World Series game for ABC one night and for NBC the next night. But I don’t ever recall a production going from one entity to another to another and then back again all in one day.”

The action will tip off at 11:30 a.m. ET with Iona vs. St. Bonaventure on YES Network, followed by Oklahoma State vs. Virginia Tech on ESPN2 at 2 p.m., Maryland vs. Tennessee on FS1 at 4:30 p.m., and then again on YES Network for Hofstra vs. UMass at 7:00 p.m. YES will be the lone production entity onsite at Barclays Center for all four games. 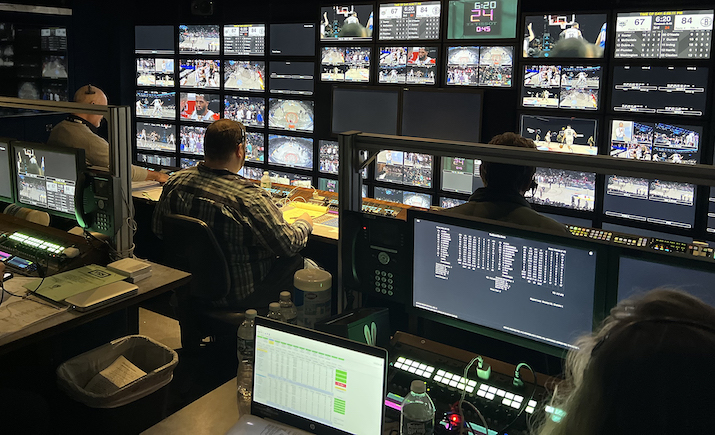 Yes Network’s major challenge in producing four games for three networks in a day will be the quick turnarounds on Game Creek Video Yogi.

“We knew it would make the most sense if we handle the whole production for the whole day,” says Freiman. “[The tournament organizers] said that would be interesting, so they spoke to ESPN and Fox [Sports], and because they respect us and trust us so much, they agreed to do it. We’ll be the production entity on all four telecasts across three different networks.”

Fortunately, YES’s Game Creek Video Yogi mobile unit will already be on hand at the Barclays truck dock since it is handling the Nets game tonight. As a result, YES is able to keep Yogi A and B units in place for a full set day tomorrow in preparation for game day on Sunday. Fox and ESPN will have their own graphics operator and coordinator onsite for the primary graphics and scorebug systems – both of which will be housed in Yogi B unit.

“Obviously, we’re very familiar with that truck and its engineers,” says Rob Brinkmann, senior director, studio and technical operations, YES Network. “We’re very thankful it will already be there. On set day, we’ll make sure that the truck engineers know exactly what’s going to be happening when and how the monitor-wall changes will take place between games.”

YES will split the quartet of games between two producer/director pairs: Troy Benjamin (lead producer on YES’s Yankees broadcasts) and Mike Cooney will be producer and director, respectively, for Games 1 and 2; producer Mike Medvin and director Ryan Rutherford will be at the front bench for Games 3 and 4. The rest of the production and technical team will remain in place for the whole four-game day.

“There’s no question that it’s a very long day,” says Freiman. “The real challenge is that there will be a very short turnaround from game to game. We could have as little as 20 minutes to change over the monitor walls and swap out the graphics, animations, wipes, and music from entity to entity to entity.”

All announcers will be onsite calling the action. On hand for YES’s two games (Game 1 and Game 4) will be Justin Shackil (play-by-play) and Vin Parise (analyst). ESPN and Fox Sports will have their own teams at the announcers’ tables for Games 2 and 3, respectively.

In terms of transmission for all three networks, YES’s engineering team plans to establish paths early in the day (around 9:30 a.m.) one by one.

“We’ll start with YES and then do ESPN and then do Fox to make sure they’re all getting the correct signals,” Brinkman explains. “[Fox and ESPN] are responsible for booking their paths, but we need to ensure everything is running smoothly. We’ll check in with everyone early and then keep [all the paths] up and running for the rest of the day.”

He notes that the arrangement provides ESPN and Fox Sports with a production that is both cost-efficient and robust, given that they will now have a full onsite show rather than the REMI/Home Run Production that would likely have been the case had they produced the games themselves.

“There are certainly challenges,” notes Brinkman, “but ESPN and Fox were good enough to work closely with us on making the shows as seamless as possible. There’s not going to be a lot of time between shows, so we’ll have as much as we can preloaded on the set day. Obviously, there’ll be a lot of communication with the TD and with audio getting music set up. It’s a unique challenge because we’ve never done anything like this before, but we’re ready to step up to the challenge.”

Although YES has handled below-the-line production for ESPN (for the Pinstripe Bowl at Yankee Stadium) and other entities, the scale of this show trumps anything the RSN has done in the past.

Says Freiman, “I am very proud of how respected not only our production teams are across the industry but how respected our operations and engineering teams are. Being able to pull off something like this with all the complications and challenges behind the scenes is no easy task, so it’s great to see the confidence that [ESPN and Fox Sports] have shown in us. I can’t think of another regional sports network that does games on the level we do, and certainly we’re on a par with what ESPN and Fox do on a regular basis. In 20 years, we’ve proven ourselves to be able to handle almost everything. This is a nice validation.”