Sports broadcasts on the radio have their own special requirements, and manufacturers ensure that their broadcast-audio consoles meet those needs. Here are a few of the leading flagship models. 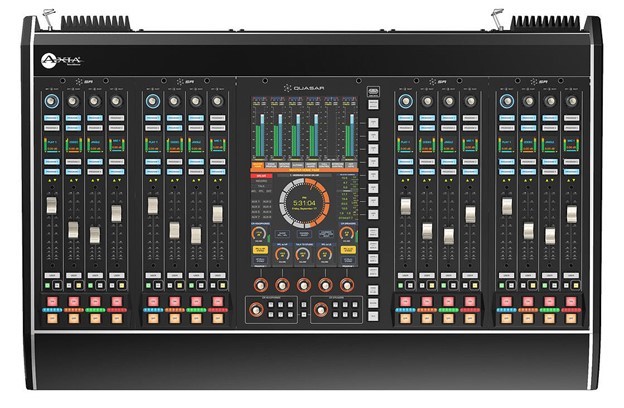 As part of Telos Alliance’s Livewire+ AES67 ecosystem, Quasar SR is the direct replacement for Axia’s best-selling Fusion console and is comparable to the Fusion console in both price and feature set. The feature set is actually superior to that of Fusion: DSP is better quality, and channel-mixing capacity is higher — thanks to the DSP engine, which is the same as that of the Axia’s flagship Quasar XR. Its ergonomics and customization capabilities are also superior to those of Fusion. It delivers all the power, ergonomics, and industrial design of the Quasar XR console. Quasar SR uses the same frame, power supply, and master module as Quasar XR, but the fader modules are non-motorized; there are fewer, larger, and more accessible buttons on each channel strip; and its control surface does not offer layers.

The Calrec Type R modular, expandable, IP-based audio console deploys standard networking technology and combines it with configurable soft panels that can be tailored to operator needs. Type R’s physical control system consists of three slimline panels: a fader panel, as well as a large and a small soft panel. Each is compatible with COTS hardware and powered over Ethernet to keep cabling to a minimum. Type R has a simple 2RU core with integrated I/O resources to get customers up and running immediately. A single core can power up to three independent mixing environments with dedicated DSP resources. Whether used as an independent studio console, microphone processor, or utility mixing, the ability to use multiple mixing engines combined with the flexibility of an AES67-compatible network provides enough flexibility to keep pace with changing requirements. Type R provides simple customization across established networks, open control protocols, and surface personalization. With a native-IP backbone, it provides an infrastructure for future expansion. 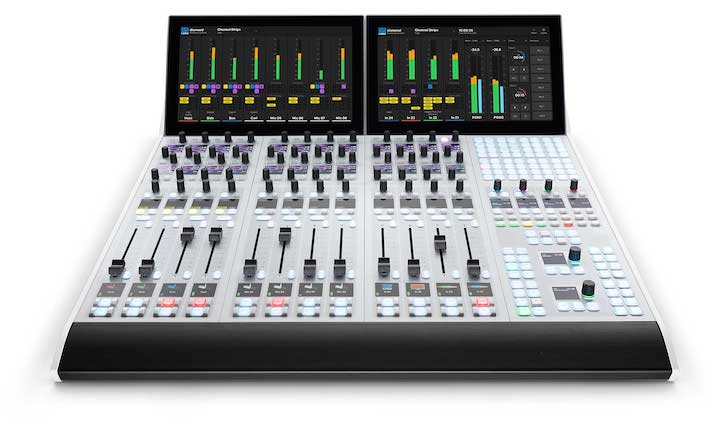 Evertz offers the Studer Micro Series for small production. Micro Core, the heart of the system, provides the functionality of a high-end digital mixing console with a feature-rich set of tools for a multitude of mixing needs in a compact and cost-effective package, an ideal solution for radio- and TV-broadcast production, ENG/DSNG, remote production, and much more. Control of the graphical user interface is built directly into the Micro Core but can also be remotely controlled by any HTML5 browser. For a more tactile touch, two PoE networked Micro Fader units can be connected. In addition to the standard XLRs provided for analog and AES digital I/O, the Micro features Studer’s HQ Mic preamplifiers, Dante I/O connectivity, and a USB track player/recorder with a simple-to-use radio-automation system as standard. 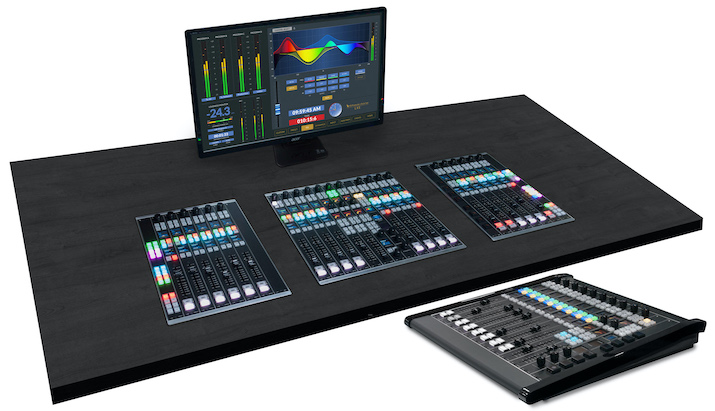 Wheatstone LXE control surface is particularly well-suited to sportscasting. It’s the console of choice, for instance, for the Huskers Radio Network in Nebraska and for WBZ-FM Boston (98.5 The Sports Hub). The latter uses LXE console surfaces to cover more than 20 Patriots games, 82 Celtics games, and 82 Bruins games annually from its new studios in Boston. Every switch, knob, and OLED display on the LXE can be reprogrammed to fit the game or workflow at hand; controls can be custom-scripted to execute any number of functions that can address the entire WheatNet-IP infrastructure at the facility. For example, Faders 1 thru 12 can be active on the physical control surface while Faders 13 through 24 are active on a virtual LXE at the sports venue, with both instances contributing to the same program output. The right mix-minus also automatically follows the right source — whether it’s down the hall, in the booth, or across a link — along with the relevant GPIO logic for triggering mics or breaks. Even connections associated with those sources follow along. LXE, a WheatNet-IP audio networked console surface, comes in different sizes and form factors and is also available in a virtual format, so the control surface can be run on a touchscreen.