In Boston, as the calendar turns and crews ready for the 2023 edition of the NHL Winter Classic (2 p.m. ET, TNT), there’s a sizable elephant in the room. And, somehow, it isn’t Fenway Park’s fabled Green Monster (more on her later). For the NHL and its broadcast partner Warner Bros. Discovery Sports (formerly Turner Sports), it’s simply: the weather. 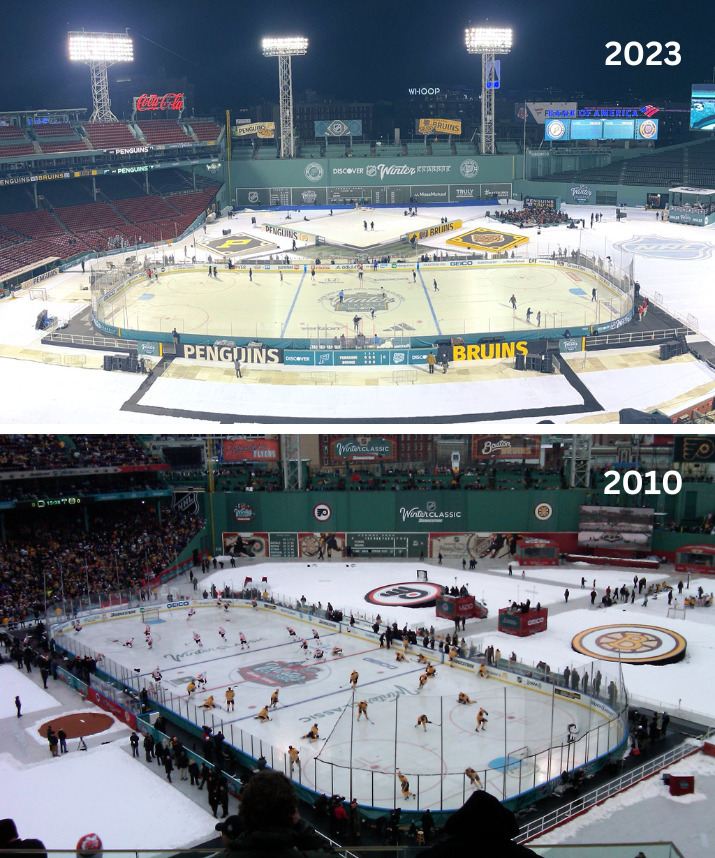 The 2023 NHL Winter Classic marks the second time that Boston’s Fenway Park has hosted the New Year’s event. This year, the NHL has positioned the rink differently. It’s the first time where a Winter Classic has been hosted at a baseball stadium and the rink hasn’t been positioned running from third base to first base.

This NHL Winter Classic – the 14th in the history of the tentpole New Year’s event – is the second produced by WBD Sports, but in a lot of ways, this is the first where the network has been able to go as “all out” as they envisioned when they first landed the marquee event upon the signing of its rights deal with the NHL in 2021.

The 2021 event – which, should be noted, still went off quite successfully at Minneapolis’ Target Field – was marred by brutally cold weather (it was nearly six degrees below zero at puck drop). With temps forecasted to break 50 degrees Fahrenheit in Boston on Monday, the event could be looking at a difference of nearly 60 degrees.

“It is so unbelievable,” beams Lee Estroff, Director, Technical Operations for WBD Sports. “I mean, this is how the Winter Classic should be. The fact that everybody can congregate, be outside and not have to run from trailer to trailer or deal with frostbite, it’s very pleasant. I think we all have a new appreciation for how cold it could be out here. We’re all very happy and we’re very thankful, for sure because I think everybody still has a lot of scars from last year.”

A stadium as historic and architecturally-unique as Fenway is a playground for a camera crew. The ops team at WBD Sports is taking every opportunity to put cameras in unique locations to capture the beauty of the event and the venerable venue.

Nearly 60 cameras are deployed throughout the stadium (approximately 50 for the game alone). There’s more than twenty robos, 12 super slow-mos, a four-point SkyCam, and three cameras shooting in shallow depth-of-field – one of which is SkateCam (the on-ice shooter with a stabilizing gimble). The other two are AnkleCams, robos from Jib Tek embedded into the lower corner boards which the network first added DoF to during last season’s Western Conference Final.

The production team is also committed to showcasing the star of the venue in this broadcast: Fenway Park’s Green Monster. The 37-foot-2-inch-high left field wall will serve as the backdrop to the rink placed on the field and WBD Sports has placed a 50-ft. tall jib right next to it on the field. Its an angle that’s sure to become a favorite of the front bench – this Winter Classic is headed up by NHL on TNT’s lead producer-director team of Joe Whelan and Paul Hemming, as well as technical director Paul Harvath.

Another angle that promises to capture viewers’ attentions on this show is the recently-introduced “Panger Vision.” “Panger Vision” places a tiny Dream Chip AtomOne mini Air onto the headset of NHL on TNT analyst Darren Pang, who will serve as the between-the-benches reporter during this Winter Classic.

Regarding the weather, the conditions this year have, according to Estroff, simply made set up simpler and more efficient. Having full facilities on-site [the 10+-truck compound is anchored by NEP Broadcasting’s Supershooter 8 and powered by 2,800kW of Redundant Power from CES Power – which also powered the chillers that made the game’s ice surface] actually had the crew ahead of schedule, as of Friday morning.

The biggest operational improvement, though, has been the ability to finally bring the NHL on TNT studio show to site.

Last year, the crew was unable to travel to Minneapolis due in part to the weather, but mostly due to the rise of the Omicron variant of COVID-19 that surged in the United States in the final weeks of December 2021. It led to multiple postponements of live sporting events, including multiple NHL games. The studio crew, instead, hosted from then-Turner Sports’ Techwood Campus in Atlanta.

The studio set for this year’s show – a Filmwerks product – is right on the field directly in centerfield.

According to Estroff, the studio team is thrilled to finally be able to be a part of this event in person. “The Winter Classic’s just a special event that we all look forward to,” he says, “everybody loves being a part of it. It’s such a cool unique opportunity for us. The studio people who missed it last year are so excited to be out here and to enjoy this. The rest of us are just happy as we’re not freezing.”

In addition to the eye-catching visuals, WBD Sports has dedicated sizable resources to the audio side of the show. More than 40 effects microphones cover the facility to capture the abnormal sound space of the facility. Additionally, four players will be wearing microphones, as well as both head coaches and a couple of the referees.

During the summer, Randy Pekich, a veteran A1 who will mix his third Winter Classic, took a trip to Fenway Park to take in a Boston Red Sox game to get a better understanding of the map of sound in the ballpark.

“We want to use the audio to put viewers where the players will be,” explains Pekich. “It’s very much an audio-follows-video kind of show: whatever you see, you’ll also be hearing.”

The show will be produced in 5.1 surround.

A Repositioned Rink Changes the Dynamics

This, of course, isn’t the first time the NHL Winter Classic has been hosted at Fenway. The event matched the Bruins and the Philadelphia Flyers here back in 2010; a game which was broadcast by the league’s former partner NBC Sports.

There’s one huge difference with this year’s event, however. The NHL has decided to reposition the rink and, for the first time in Winter Classic history will not run the rink from third base to first base. Instead, it flows from third base into right field. The TNT crew is thrilled by the prospect as it places the Green Monster squarely as the backdrop to the game.

Coverage of the 2022 NHL Winter Classic begins on Monday at 1 p.m. ET on TNT with NHL on TNT Face Off. Game coverage begins at 2 p.m. ET, also on TNT.