44 cameras, 40+ mics will cover all the bases as hockey returns to Fenway Park

The 2023 Discover NHL Winter Classic on Jan. 2 from Boston’s Fenway Park, the 14th since the first in 2008, will reprise the sport’s greatest twist: putting on a hockey game in an outdoor baseball stadium.

“That’s the single biggest challenge we have with this event,” says Dan Nabors, director, engineering, Warner Bros. Discovery (WBD) Sports. “It’s like putting a square peg into a round hole.”

This year, the company’s second as the NHL’s main broadcaster and host of the Winter Classic — which is making its second visit to Fenway — the event will be characterized by plenty of interesting angles from the 44 cameras onsite, including the Jib Tek shallow–depth-of-field “ankle cam” POV camera mounted in the dasher boards and designed to focus on skate action.

Lots of Sound Capture as Well

The Winter Classic’s audio also is quite comprehensive. Veteran hockey A1 Randy Pekich, who has mixed two previous outdoors Winter Classics and one Stadium Series game, describes the Winter Classic as “very much a hockey game, only grander.” He’s mixing a base array of a dozen ice microphones (Crown PCCs mounted on the glass), 16 camera mics, eight stereo crowd mics, and one lav in each goal net. He expects to implement another 10 or so by game time, including lavs mounted near the benches and in the approach tunnels (available for replays only and under the league’s guidance). Two players per team will be wired for sound, as will both head coaches and referee Chris Rooney. 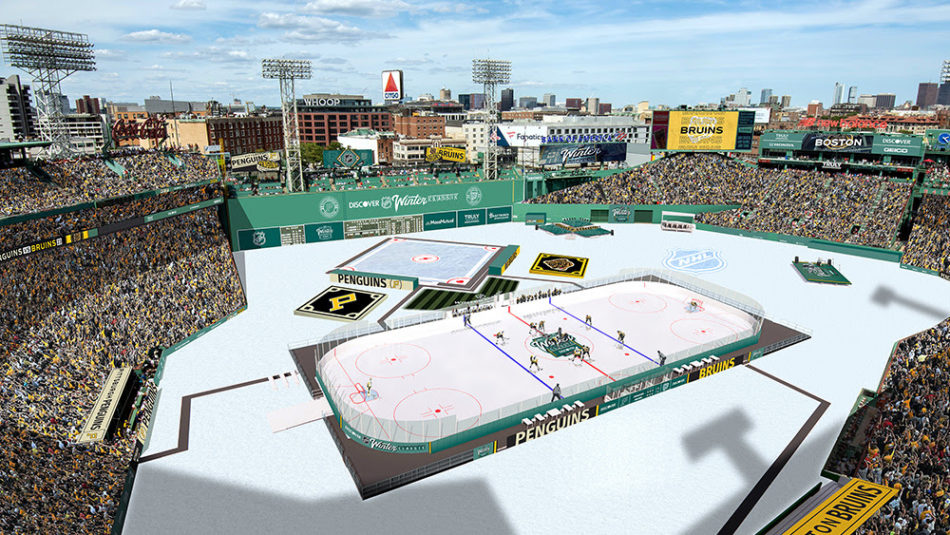 “We want to use the audio to put viewers where the players will be,” he explains, noting that the production’s 5.1-surround format will keep ambience nicely present in the surrounds for all the environments the cameras reach. “It’s very much an audio-follows-video kind of show: whatever you see, you’ll also be hearing.”

To Suit the Sound to the Specific Venue

The audio strategy for this event goes back nearly a year. Chris Brown, VP, production operations and technology, WDB Sports, recalls the singular sound of hockey played outdoors during the Feb. 26 NHL Stadium Series game at Nissan Stadium in Nashville, where the Nashville Predators hosted the Tampa Bay Lightning. Brown says the network’s approach to the audio for the Winter Classic stems from the desire to capture the distinctive sound of a lightning-fast, highly percussive sport played in a venue designed for a more pastoral one. Unlike the generally consistent sonic nature of most arenas, individual geometries make ballparks architecturally and acoustically unique. Fenway Park is defined largely by its towering and acoustically reflective left-field wall, which baseball fans affectionally call the Green Monster.

To give the venue a pre-show vetting, Brown dispatched Pekich to see — and hear — a baseball game at the stadium last September.

“I asked him to go to a ballgame there and listen to the sound of the venue and the crowd and tell me what he needs to bring that sound back through his console [for the Winter Classic],” Brown explains. “The A1 is mixing from inside the truck, so they rarely get to hear what the crowd actually sounds like when the fans go crazy inside the stadium. That was the mission for this, and we worked closely with the NHL to achieve that.”

It’s a tactic, he adds, that might become a regular part of preparations for tentpole events like the Winter Classic, as more sports are played in less-conventional environments.

Brown notes further that some “poignant moments” are planned to engage the crowd with some of the music performances. Knowing the nuances of the venue’s acoustics will help significantly in capturing the emotions those moments evoke, he believes.

It’s not just the viewers who will benefit from the event’s sound. The fans in the stands will have their in-person experience further enhanced, via effects-capture microphones that the NHL will deploy around the rink to send the cracks of sticks and pucks through the venue PA system.

In addition, this outdoor game will have more live music than in the past. The face-off between the Boston Bruins and Pittsburgh Penguins will have its own “score” from rockers the Black Keys, classic R&B trio Bell Biv DeVoe, and Beantown’s own renowned Boston Pops Orchestra, as well as baseball-themed activities taking place on the “Ice Diamond” auxiliary rink. A portion of the Black Keys’ performance during the first intermission will be televised.

WBD Sports is deploying NEP Supershooter 8 and ST-8 A and B production units for the game and ND7 A and B and ST-7 for the studio show. The music elements, produced by the NHL and mixed onsite by Grammy Awards show veteran Tom Holmes, will be sent as separate feeds via fiber to WBD Sports.

“It’s a very big production,” says Nabors, with obvious understatement. “That’s a bit ironic since Fenway is more intimate than some of the other [baseball] venues it has been done in. For instance, Target Field in Minneapolis last year was a very big stadium; that can make it more of a challenge to get closer to the action. At Fenway, we’re able to get the cameras in closer. That’ll make for a unique look.”

(Last year’s Winter Classic was the coldest of the events, with a temperature of -5.7 F at puck drop. Boston’s forecast for the game day is a relatively balmy 51.)

Unlike last year, when COVID restrictions compelled Turner Sports to produce the studio show remotely, WBD Sports will be doing the entire production onsite. The studio team of Paul Bissonnette, Anson Carter, Rick Tocchet, and the Great One, Wayne Gretzky, led by host Liam McHugh, will reprise their roles, as will Kenny Albert, who will handle play-by-play, along with color commentator Eddie Olczyk, and Keith Jones inside the glass.

It’s also very much what WBD Sports has aimed for since taking on the NHL broadcasts in 2021: hockey, up close and personal.

“We came into the first year with large production values right from the start,” says Nabors. “It’s a good production model for hockey, and that’s what we’re continuing to do, here and during the season.”