Every year the numbers explode off the page. ESPN’s production of the 2023 edition of the CFP National Championship from SoFi Stadium (7:30 p.m. ET, ESPN) is no different. 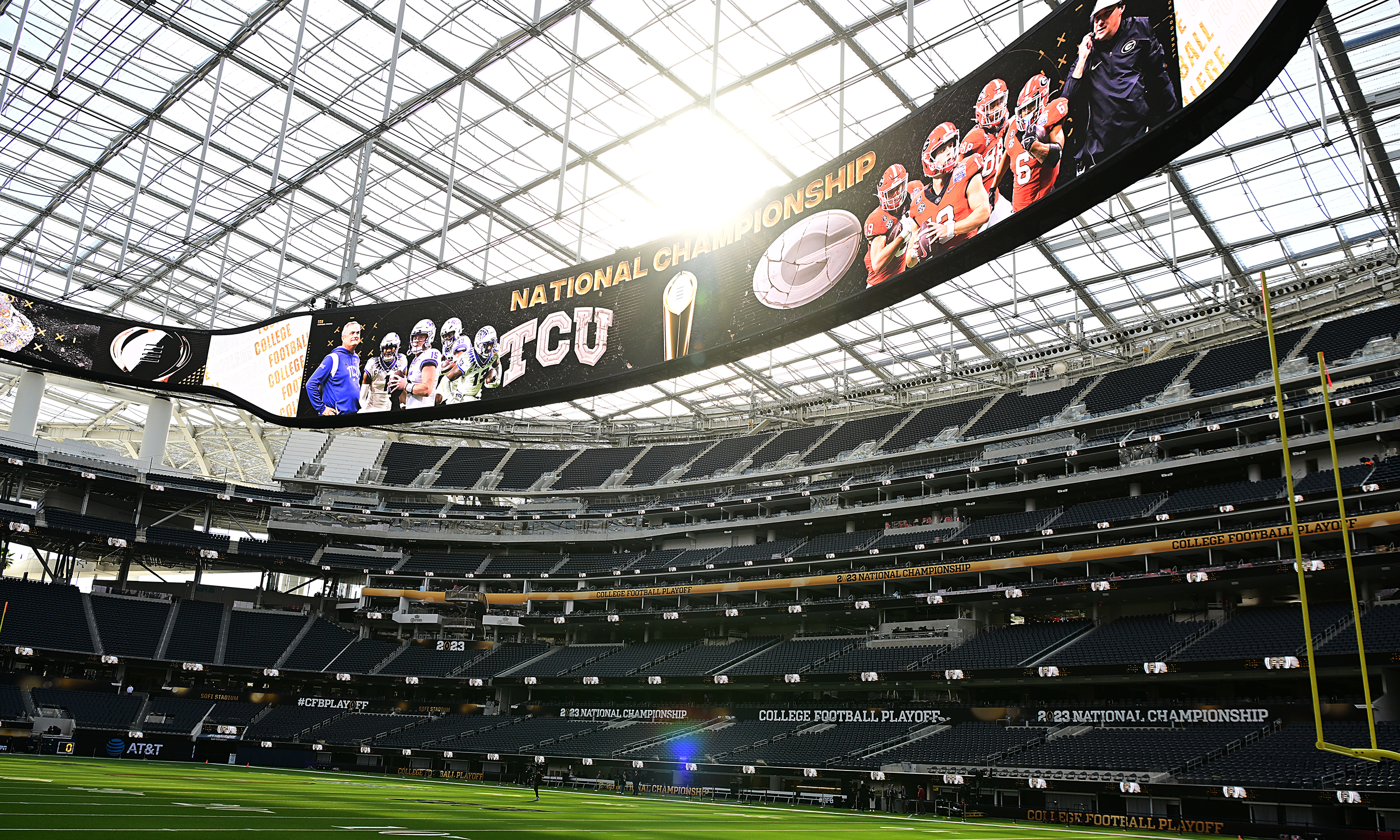 Ninety-five game cameras. Seventy-four transmission paths. Approximately 170 channels of replay. More than eighteen miles of fiber. Five aerial cameras (including two SkyCams, a live drone, and the iconic Goodyear Blimp). Twelve mobile units in a production compound so big that it spilled out into the SoFi Stadium parking lot.

Operationally, the CFP National Championship Game is one of, if not the, biggest effort that ESPN puts behind a single game. From the amount of resources deployed to cover every inch of the action to the host of alternate viewing options the network offers, its simultaneously the most fully-baked and most experimental event on the ESPN calendar. 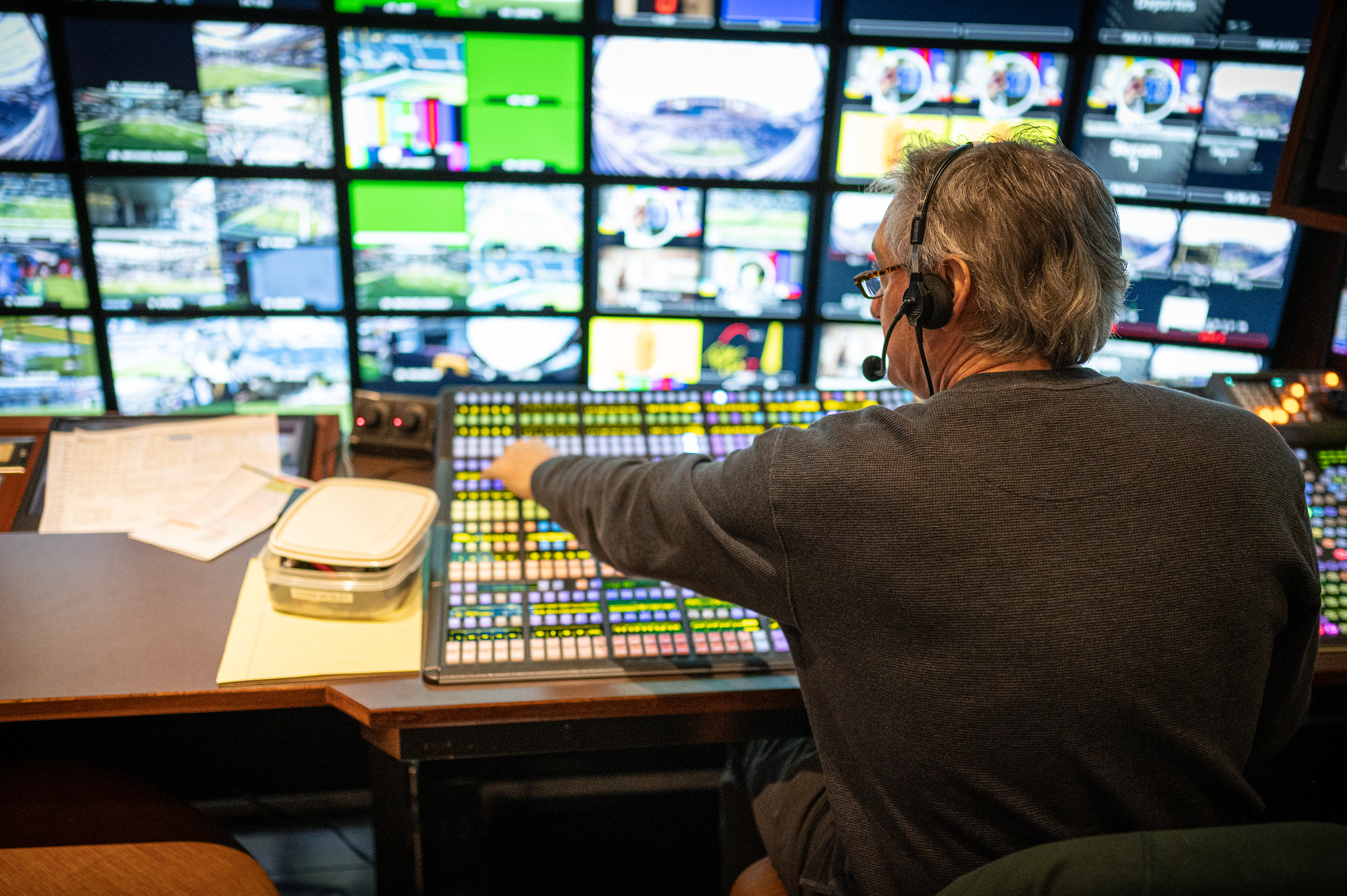 “I think this show is the personification of everything ESPN can do,” says Tommy Mitchell, senior operations manager for ESPN, who is working his eighth CFP National Championship game. “The game is the game and we will always give our attention to the game. That will always be our number one priority. But this show really lets us flex our technical muscle and test out what else we can do. The technology that we are given the opportunity to utilize and the bandwidth we’re given to test things on a show of this level is amazing.”

Among the key elements of the production that are new this year include the deployment of Fujinon’s new HZK25-1000mm lens, the “AllCam” (which is a stitching together of three 4K cameras to offer a complete all-22 view of the playing field with digital pan and zoom), the rigging of two SkyCams (one of which is rigged to allow for it to fly in the space inside SoFi Stadium’s signature Infinity Screen), and a production compound fully powered by UPS (uninterruptible power supply).

Inside the Camera Plan

The goal for ESPN’s camera coerage at the CFP Championship each year is two-fold: one is to offer a comprehensive look at the action on the field. The other is to simply make sure they have every possible spot on the field covered in the case of any extraneous circumstance. Sometimes an angle won’t get used at all. Sometimes it’ll provide a look critical to the outcome of the game.

This year that means 84 cameras dedicated to game coverage alone and an additional 11 that are added resources from other ESPN studio shows, Megacast offerings, and shares resources from the SoFi Stadium team. 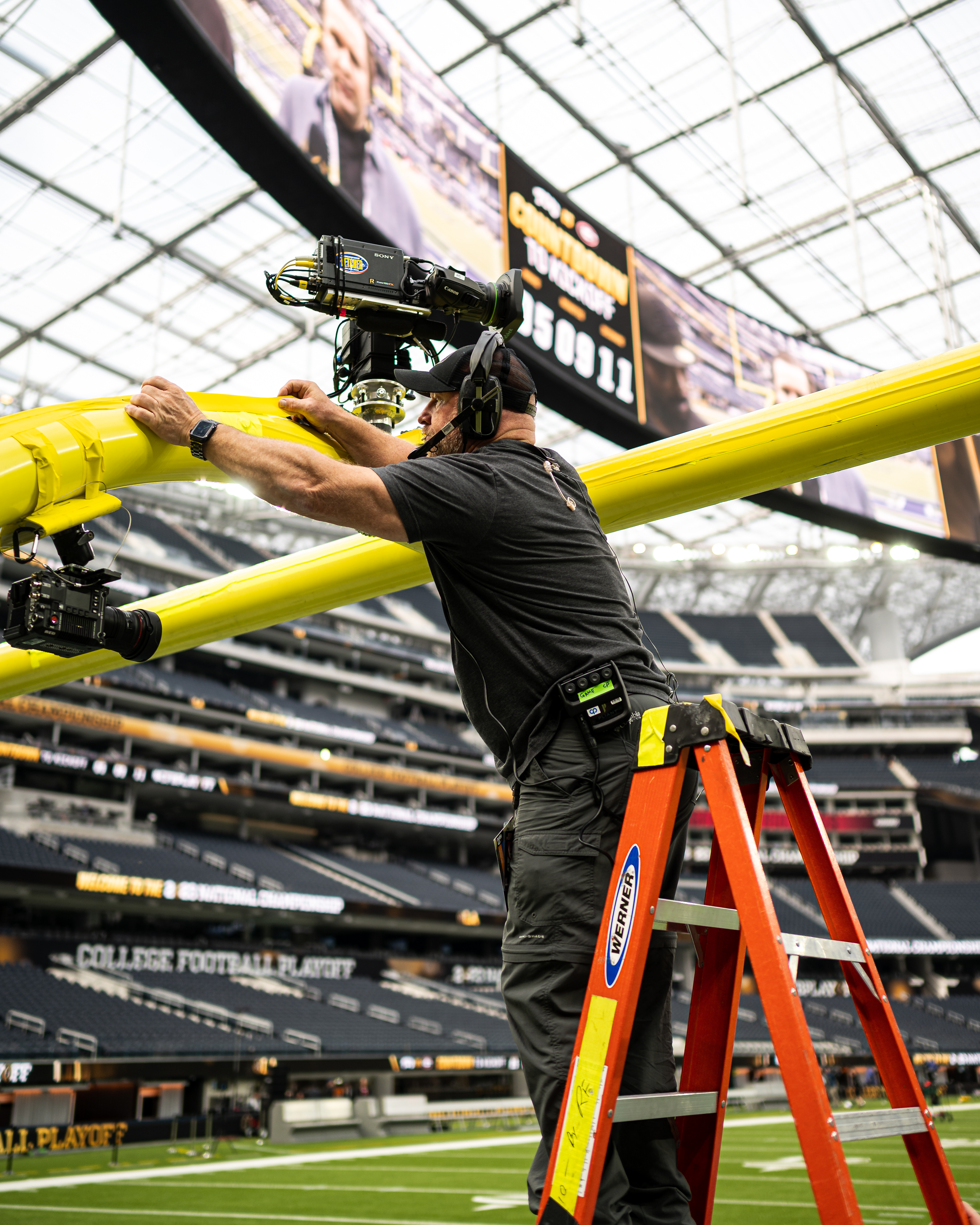 Technician Jerome Leigh affixes a camera to the goalpost prior to the 2023 CFP National Championship. (Photo Courtesy of ESPN)

The lineup features a whopping 16 super slow-motion cameras (all ranging from 4x, 6x, and up to 8x), four 4K cameras, 16 wireless cameras supported by either RF or bonded cellular, 12 robos, two SkyCams, a two-point FlyCam (which is rigged to fly over the extensior pond outside SoFi Stadium and into the building’s front entry way), and a DJI Mavic 3 drone that will fly outside the stadium and cam be taken live.

There are, of course, numerous speciality cameras and angles for an event of this nature. As expected, Pylon Cams are here – 30 of them in fact. The end zone pylons, of which there are 16 in the front and 12 in the rear, are provided by BSI. At the start of the season, ESPN upgraded its “A” game Pylon Cam package to put a Dreamchip camera controlled by Cyanview to offer a higher resolution sensor.

The “AllCam,” as ESPN is calling it, is a 4K capture of the entire playing field. Three 4K camera angles (positioned at the same spot where the main game camera is located off the 50 yard line) are stitched together within Chyron Paint where a digital pan-tilt-zoom can be done without loss of resolution.

“Think of it as an All 22 that we can tilt and zoom digitally,” says Mitchell.

It’ll also offer a valuable backup if something anywhere on the field needs to be zoomed in on that the other array of cameras don’t happen to catch.

The ESPN crew is also bringing back an innovative camera angle from last year but in a much more logistically simple way. A year ago at this event, ESPN set up cameras in the catwalk of the roof at LucasOil Stadium in Indianapolis. The locked-off robotic cameras offered unprecedented overhead views of the goal line pylons at the corners of each end zone. This angle was meant to provide an angle that might be needed on a tight play at the goal line. This year’s show will have the same look but those cameras are already, conveniently built into the edges of SoFi Stadium’s Infinity Screen. The video feeds are being provided to ESPN by the in-house videoboard team.

All these looks offer a plethora of views for the game’s production team. Monday night’s game will again be produced by Bill Bonnell and directed by Derek Mobley. The duo has worked together on top-flight college football games for ESPN since 2006. Also at the front bench is technical director (TD) John Zipay.

ESPN’s coverage is also slated to feature Fujinon’s new HZK25-1000mm Lens. The native PL Mount was first introduced last month in the United States and made its U.S. debut in the exhibit hall of the 2022 SVG Summit in December. 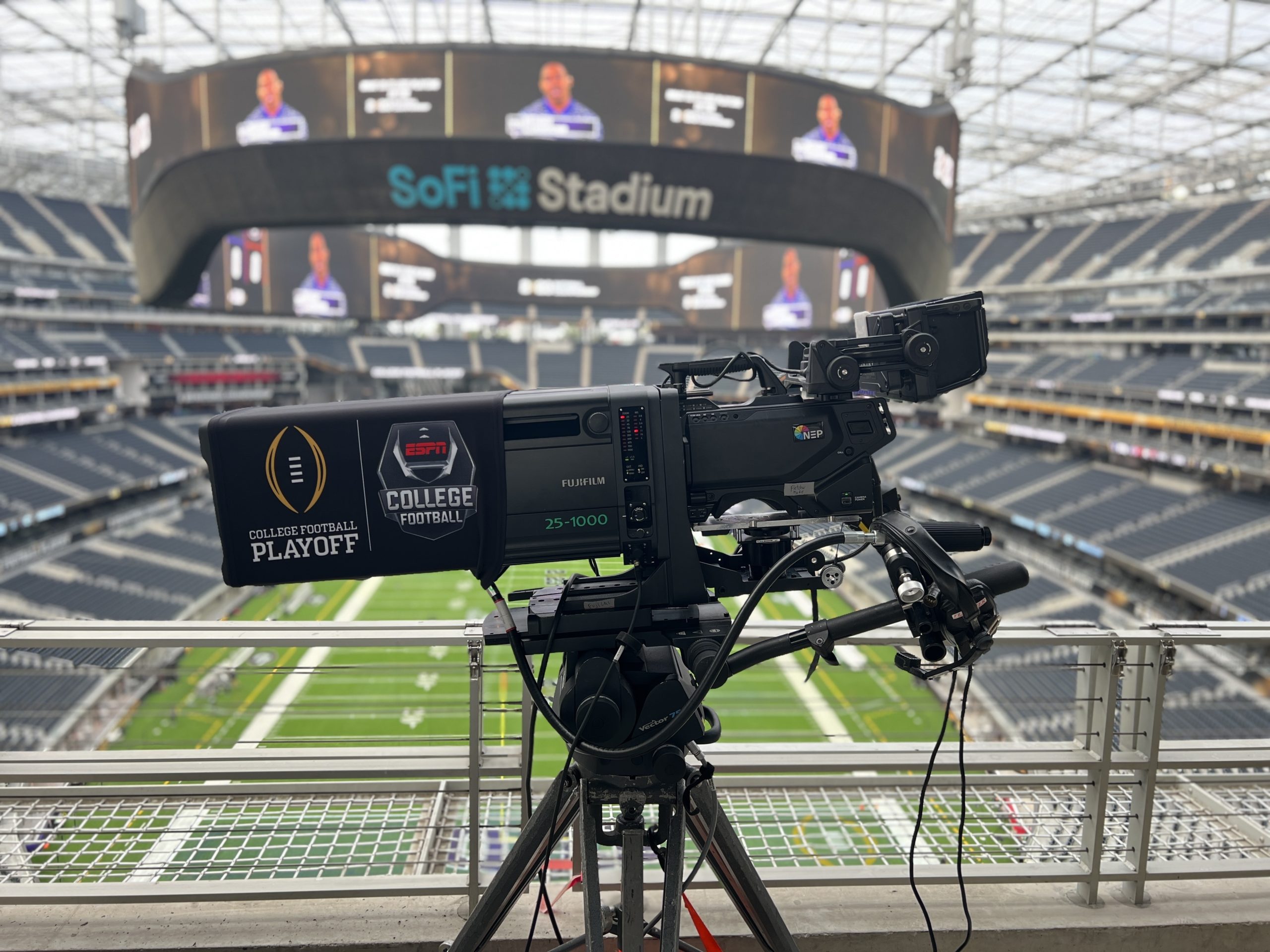 At CFP, the lens will be incorporated on a Sony 4800 camera positioned at one of two high-end-zone locations. While the lens is yet to be released its designed to support large sensor format cameras, and boasts a 40x zoom ratio and a telephoto focal length of 1000mm while providing a broadcast-caliber bokeh for a cinematic feel and a strong combination of of magnification and telephoto reach.

“It allows us to put a lens that is meant to be put on a full-frame camera on a full frame camer, and operate it like we would,” says Brian Ristine, remote operations specialist for ESPN. “I’m pretty excited to see how that works and fits in the workflow to augment the things that we’re doing.”

Prior to this event, the lens had been used in December on a Monday Night Football game by ESPN and on an NFL broadcast by CBS Sports. It’s planned to be used in the NFL Playoffs by both ESPN and CBS Sports (at the AFC Championship Game). Fujinon says that the lens will again be on display at the HPA Tech Retreat (Feb. 20-22, Palm Springs) and the 2023 NAB Show (April 16-19, Las Vegas).

A total of 12 mobile production vehicles – provided by Game Creek Video – are on-hand to support production of the main game, various Megacast alternate viewing options, and studio programming for College GameDay and the SEC Network. 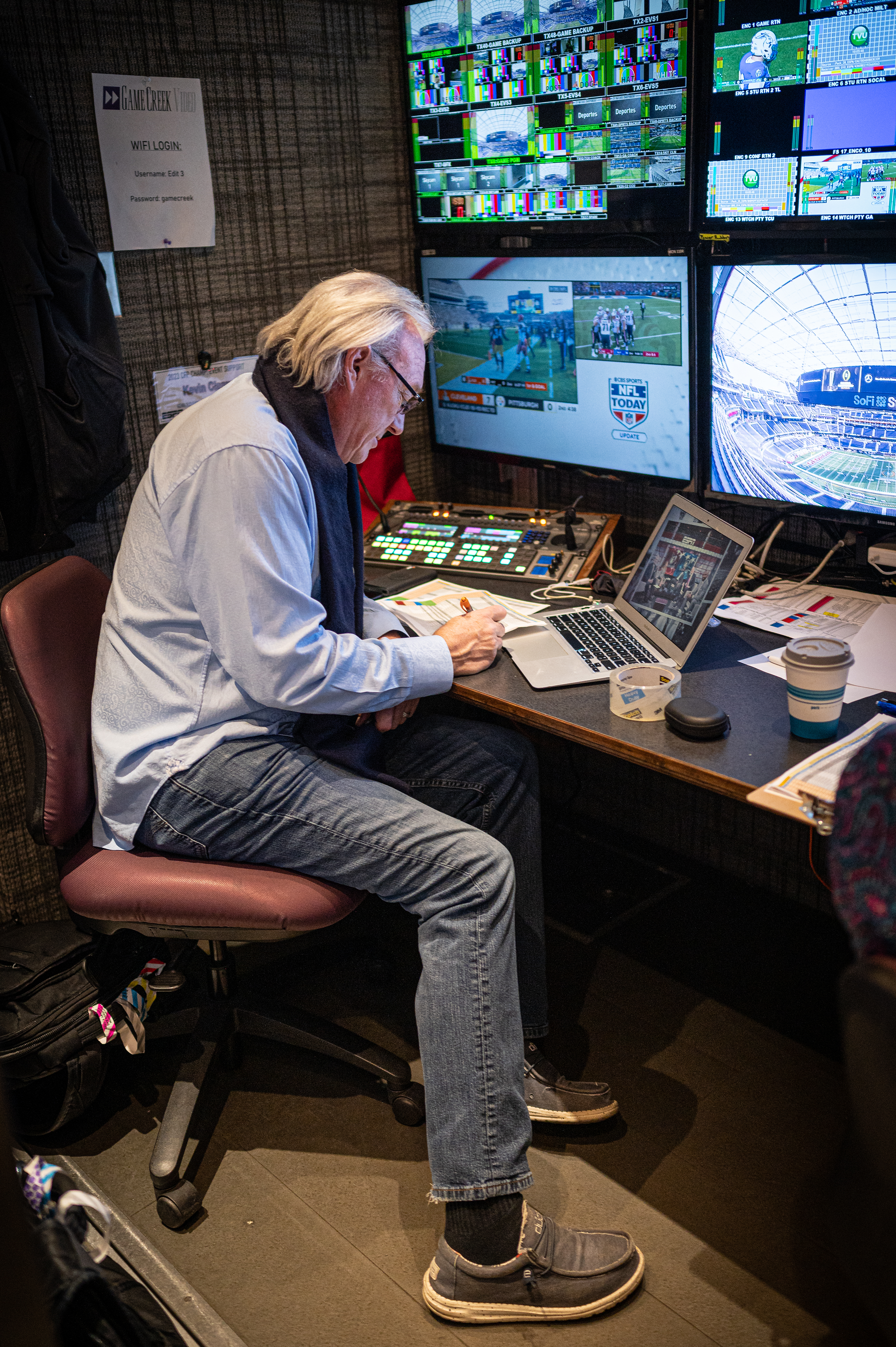 The compound is so large that it spills out of SoFi Stadium’s loading dock and out into the parking lot. More than 1,700 feet of fiber has been utilized to connect the two compounds. Most of the production units remain in the primary compond while numerous support vehicles and office trailers were set up outside.

GCV’s deployment is anchored by 79 and it’s A and B units, which serve as the home for the main game production.

In a first for ESPN at an event of this size, the compound and its supporting facilities are being 100% powered by UPS. Saunders Electric has provided two of its Engineering Emmy Award-winning mobile UPS systems. Those units are tied directly into the house power and the power distributed to all the trucks and support vehicles in the compound.

On the transmission side, there 74 paths between the Hollywood Park site and Bristol: 54 outbound and 20 inbound).

Main game coverage of the 2022 CFP National Championship Game between TCU and Georgia begins at 7:30 p.m. ET on ESPN. For a complete listing of the 12 MegaCast options available, CLICK HERE.