It has been a unique season for the NBC Sports operations team: it not only was tasked with delivering one of the biggest weekly live productions in the business with Sunday Night Football but also collaborated closely with Amazon Prime Video on its inaugural Thursday Night Football package. This weekend, NBC’s team will once again be split, with the TNF crew on hand in Jacksonville, FL, with Game Creek Prime One and Prime Two trucks for Chargers-Jaguars and the SNF crew and NEP ND1 trucks handling Sunday’s Ravens-Bengals game in Cincinnati. 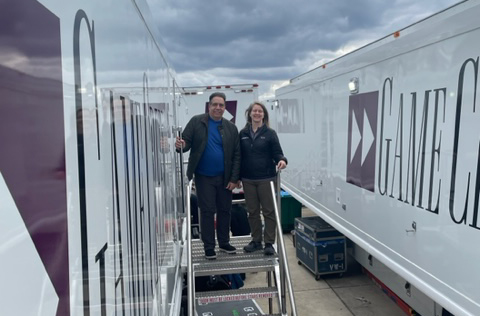 “It has definitely been an interesting and very different kind of year,” says Jenny Powelson, director, remote technical operations, NBS Sports, who oversaw operations for TNF this season. “Just getting brand-new trucks in time for our [broadcast] boot camp in L.A. and then getting to Week 1 was a major accomplishment. And then putting on such a massive show like that every week was very challenging. But this team is what made it all happen. Every single person on this crew was handpicked to be a part of this team, and we couldn’t have done it without every one of them.”

Although SNF and TNF deploy a near-Super Bowl-level of production technology each week, NBC still found a way to add a few new toys to its NFL Super Wild Card Weekend productions.

Both games will feature field-side pregame-show sets for Football Night in America, with co-host Jac Collinsworth and analyst Rodney Harrison pulling their own version of Phil Collins’s Live Aid stunt by providing live reports at TIAA Bank Field on Saturday before heading to Paycore Stadium for Sunday’s game. Meanwhile, host Maria Taylor — along with analysts Jason Garrett, Chris Simms, Mike Florio, and Matthew Berry — will be back in the studio in Stamford, CT.

NBC will deploy more than 40 cameras for Saturday’s game in Jacksonville and Sunday’s game in Cincinnati — with the two camera complements largely mirroring one another. This includes 13 Sony HDC-5500’s in 6X-slo-mo mode, five HDC-4800 4K cameras, two Sony HDC-P50 RF Steadicams on the field, and a Skycam Wildcat wired aerial system.

Since both games will have Sony HDC 4800 4K cameras shooting down the sidelines for close plays on the field, NBC’s production team opted to forgo goal-line Pylon Cams this weekend. However, both productions will have 3G wireless RF line-to-gain cams on hand.

Saturday’s game in Jacksonville will also feature a jib overlooking the stadium bowl, which the game in Cincinnati will not have. Saturday’s game will have an extra EVS XT-VIA replay system at its disposal, bringing the number of replay operators to a whopping 17.

A Grand Sendoff for a Legend in the Truck

Sunday’s production will be led by Coordinating Producer Rob Hyland and director Drew Esocoff, who will also handle NBC’s Divisional Round playoff game next week out of ND1. The Prime trucks, meanwhile, will transition to Fox Sports, which will use the mobile units for its NFC Championship and Super Bowl LVII pregame shows.