Tees up 2023 season next weekend from Torrey Pines

CBS Sports is a week away from teeing up its 2023 PGA TOUR coverage and the network will collaborate with the tour to introduce a number of new innovations, including new camera systems and graphic enhancements to the constant leaderboard. Key additions include integrated player stats and swing data as well as virtual overlays that will be utilized regularly within live coverage. 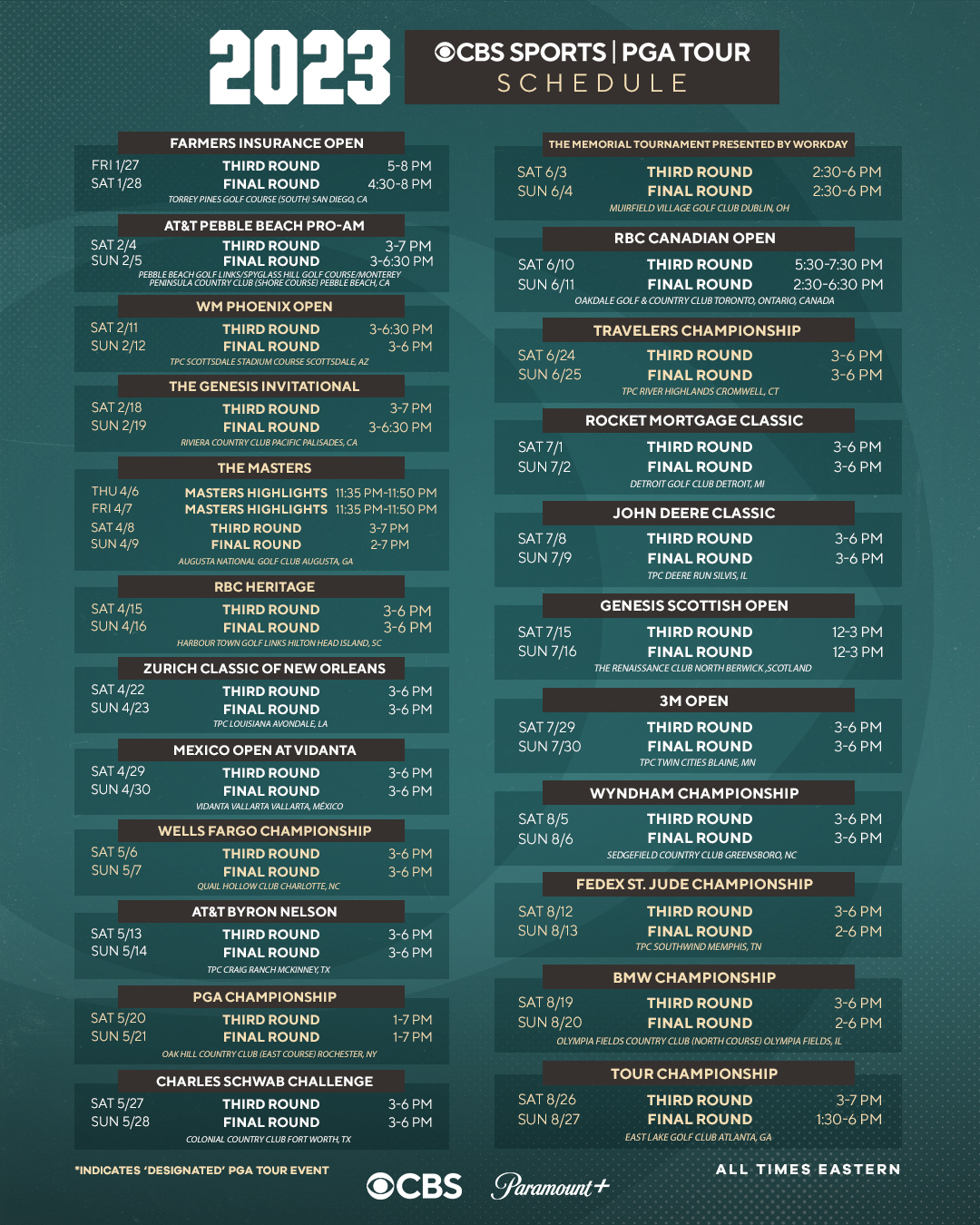 Sellers Shy serves as lead producer for CBS Sports’ golf coverage, alongside Steve Milton as lead director. CBS Sports’ schedule gets underway at the Farmers Insurance Open from Torrey Pines Golf Course in San Diego with a special Saturday final-round conclusion (the NFL’s AFC Championship game will be front and center on CBS on January 29). The third round on Friday, Jan. 27 (5:00-8:00 PM, ET) and final round on Saturday, Jan. 28 (4:30-8:00 PM, ET), will be broadcast on the CBS Television Network and streamed live on Paramount+.

Also look for the Network’s “Eye on the Course” commercial break format to allow viewers to continue following the action as well as an expanded “on-course set” configuration featuring Colt Knost who will offer perspective from inside the ropes and Amanda Renner who will provide reports and conduct interviews.

This marks the 66th consecutive year CBS has televised the PGA TOUR. Jim Nantz returns to anchor the coverage but Trevor Immelman takes over as lead analyst for the multiplatform coverage of 23 PGA TOUR events in 2023 originating from four countries across the CBS Television Network and Paramount+.

The GOLF ON CBS schedule will culminate in August with weekend coverage of the PGA TOUR’s entire FedExCup Playoffs for the very first time, and The CBS Television Network in 2023 also will be the broadcast home for 11 of the 17 designated PGA TOUR events.

Jim Nantz will anchor the Network’s coverage, beginning with the Farmers Insurance Open, which he’ll call live from the site of the AFC Championship game. Immelman – 2008 Masters champion and captain of the 2022 Presidents Cup International team – will make his debut as CBS Sports’ new lead golf analyst. Ian Baker-Finch and Frank Nobilo will join Nantz and Immelman to provide analysis from the Super Tower throughout the season. Lead on-course reporter Dottie Pepper, along with Mark Immelman, Knost, and Renner. Andrew Catalon who will host select CBS broadcasts.

Complementing the Network’s coverage of the PGA TOUR in 2023, CBS Sports also will feature live final round broadcasts of three LPGA Tour events:

In addition to live tournament coverage in 2023, CBS Sports will provide multi-platform, complementary golf programming throughout the season. The Network will air six PGA TOUR Specials and six Korn Ferry Tour Specials, as well as several episodes of COURSE RECORD WITH MICHAEL BREED, along with additional golf programming throughout the season leading into live golf coverage.

CBS Sports Network also will air both classic PGA TOUR telecasts each week leading up to the tournament on CBS, as well as encores of CBS’ final round coverage on Monday nights.

CBS Sports’ full programming lineup of all PGA TOUR and LPGA Tour events, as well as additional golf shows will be available to stream on Paramount+. Additional coverage throughout the season will be available on CBSSports.com, the CBS Sports app, CBS Sports HQ – the 24/7 streaming sports news network, The First Cut podcast and @GolfonCBS social media platforms.