Main goals for the dedicated space are live productions, access to players

After years without a permanent facility for producing digital and creative content, the Atlanta Falcons have opened the doors to the state-of-the-art Ticketmaster Studios. A separate addition to the team’s training facility in Flowery Branch, GA, the new studio will be used to create and develop engaging digital content for daily consumption and tentpole events alike.

“In a sport where players wear helmets, it’s a little bit difficult to get to know them as a person,” says Scott Kegley, VP, digital strategy, AMB Sports + Entertainment (AMBSE), which owns the Falcons. “We want to be able to bring [our fans] closer to the players and tell their stories in a manner that is unique to us and our brand.” 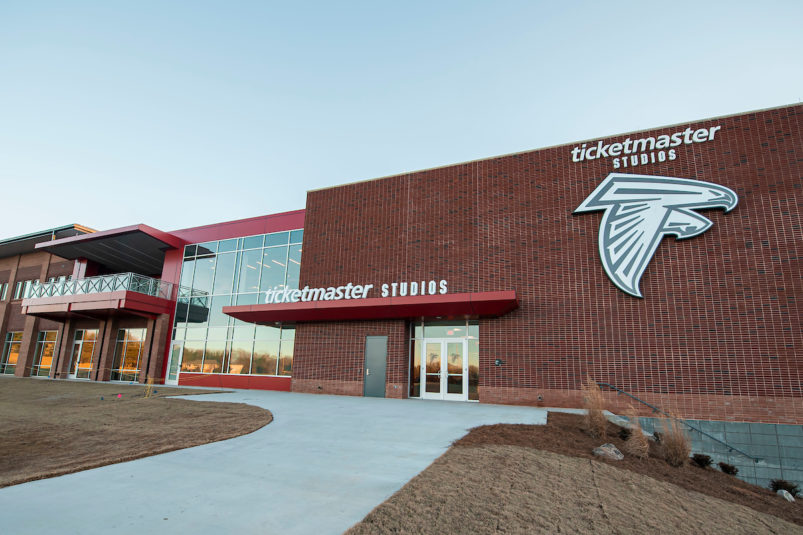 In previous seasons, the Atlanta Falcons’ video-production team adopted an ad hoc approach to capturing and delivering content. Without a brick-and-mortar home, projects were restricted to postproduction, and staffers had to work in a more mobile setting. Finding the crew its own space and expanding content strategy to include live, real-time production were two major priorities when the project was begun four years ago.

“My group became known for pushing around carts everywhere because we had no dedicated space,” says Austin Hittel, director, video production and broadcast, Atlanta Falcons. “If we were doing an NFL Draft show, we were pulling a TriCaster into the indoor facility and creating makeshift. From an operations standpoint, my team spent a lot more time building and breaking down, which for us wasn’t good because we were creating less content.” 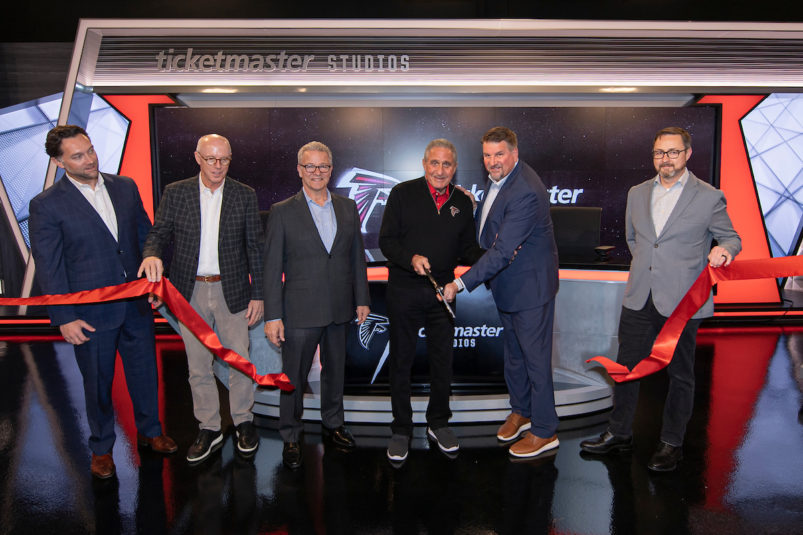 Along with establishing a facility for the production team, the main goal for the project was to have an area that was easily accessible to the players, who don’t generally have much time between practice and other meetings. To make the most of their time, the organization knew exactly where to place its new production center: attached to the training facility’s main building and right next to the locker room and players’ cafeteria.

“We wanted to make it convenient because our players’ time is valuable,” adds Hittel.

Unfortunately, the COVID-19 pandemic put the plans on hold throughout 2020, but the Falcons revitalized the project in early 2021. The first order of business was to lock in the necessary partners, who would help them complete the job with the highest quality. 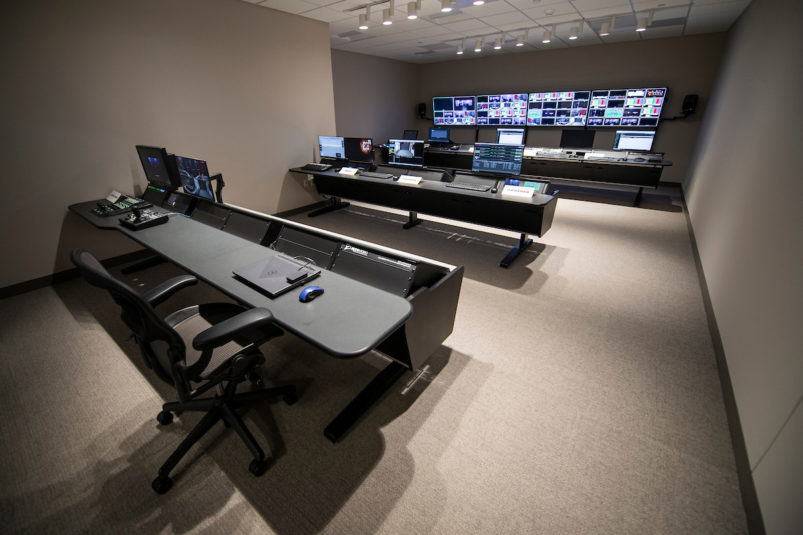 For systems integration in the brand-new control room, Hittel and company tapped Alpha Video, which has played a vital role in other impressive builds over the past five years, including the Las Vegas Raiders’ studio. The Falcons discussed expanding their 50-acre training facility to accommodate the studio, and, once that idea was put in motion, Alpha Video deployed an onsite team to Georgia to evaluate the situation.

“This was a collaborative effort between the Falcons, Alpha Video, their architect, and their general contractor,” says Jeff Volk, VP, sports and entertainment, Alpha Video. “There were no designs, so we spent a good three to four months at the end of 2021 to refine that. When the project was green-lit, construction started, and we finalized the list of equipment and materials to support the architectural spaces.”

Volk notes a few obstacles that had to be navigated in completing the job. During the conceptualization stage, for example, the Alpha Video team needed to mesh the ideas of both veteran employees and new staffers on the Falcons. 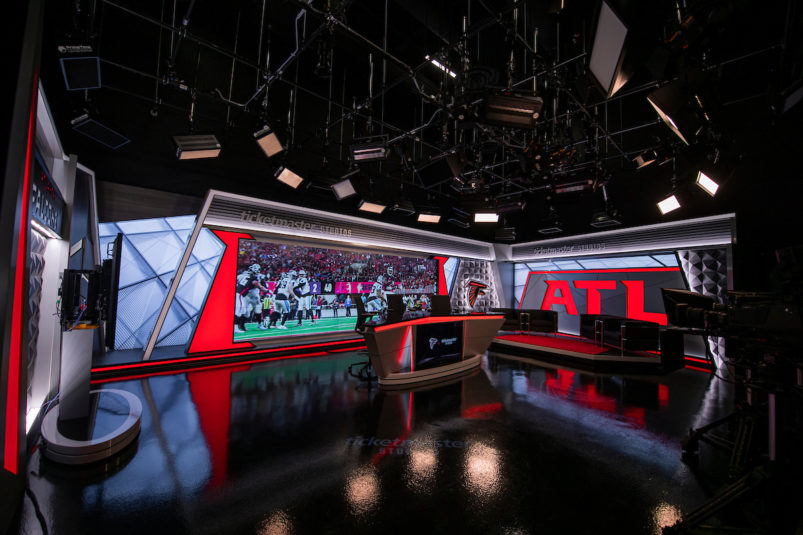 “Whenever you start on a brand-new construction project, there will be people that were part of the project from the beginning and new people that come in,” he says. “The biggest challenge is translating various visions into one cohesive set of ideas and having that come out on the other end as the finished product.”

“The nuance is [knowing] what teams are doing from a content perspective and how we can build something that supports that content strategy,” Volk explains. “The trick is developing a space that’s flexible should their vision go in a different direction or their content isn’t adaptable to what’s popular with their fans and they need to pivot.” 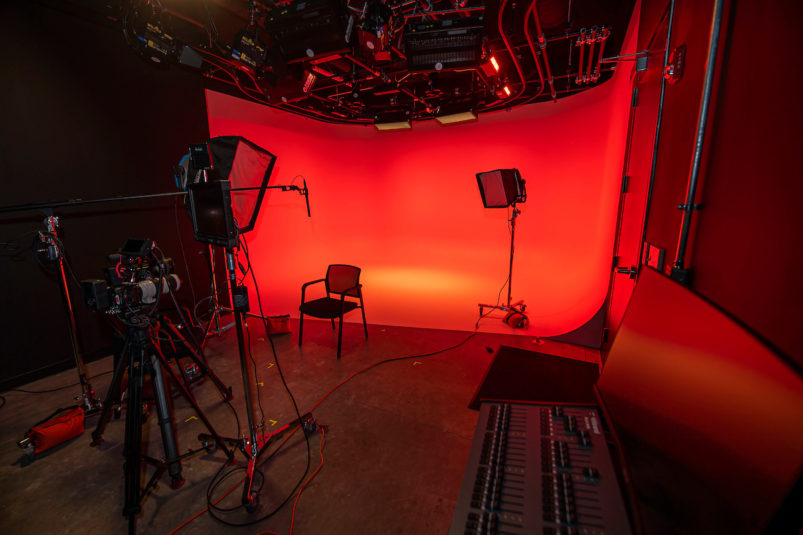 The Falcons’ photography team has its own dedicated studio.

Also, given the uniqueness of the build, the Alpha Video crew was tasked with fitting all the desired hardware into the space’s specific dimensions.

“We had limited options to build a building big enough to accommodate a facility of this size,” says Volk. “We had to be pretty creative with our spacing. As a result, a lot of the back-of-house areas have unique shapes and dimensions. Given the site plan that we had to stay within, we landed on the most ideal building possible.”

Nestled within the newly created wing are three separate studios — one for broadcast, one for podcasts and other audio-centric material, one solely for visuals and photography — and a dedicated broadcast-control room. The studio also includes a balcony overlooking the practice field and features broadcast connectivity to the control room.

The main studio features three Grass Valley LDX 92 cameras, multiple Canon lenses, a large-scale LED wall, and a main desk and scenic elements built by Creative Dimensions. In the secondary studio, the photography team works with controllable lighting from ILS and an expansive backdrop that can be used for player photos and other one-on-one activities. In the podcast studio, which was also put together by Creative Dimensions, content is captured by three Sony BRC-X1000 PTZs and two Sony RM-IP500 PTZ camera remote controllers.

Particularly notable is the symmetry between this control room and the in-venue control room at Mercedes-Benz Stadium, the franchise’s home. That not only creates cross-functionality among staffers at both locations — NDI connectivity links the two sites despite their being 45 miles apart — but also allows the engineers to focus on troubleshooting the same equipment if there are complications.

“When we’re commissioning and configuring [our control room], it’s basically a version of what’s at the stadium,” says Hittel. “It’s great for us because we can rely on the same freelancer pool, and it saves us a lot of time on having to find those resources.” 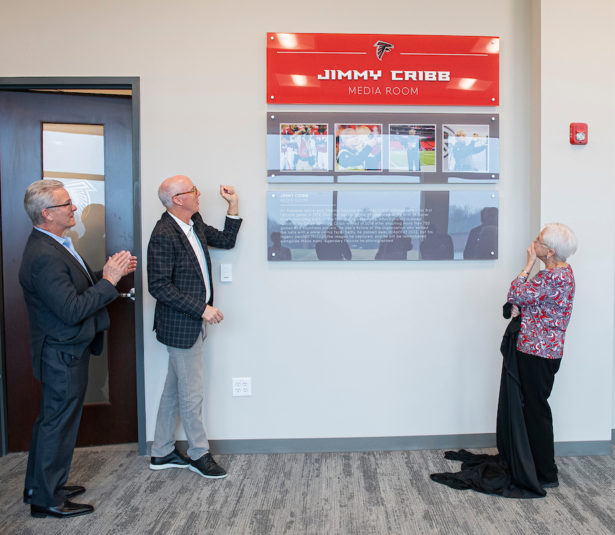 In addition to the multiple studios, Ticketmaster Studios honors one of the Falcons’ own: longtime team photographer Jimmy Cribb, who died last April. Covering the team for nearly four decades after his first game in 1979, Cribb worked more than 750 games and 18 Super Bowls and captured the play of 1,000 Falcons players before retiring at age 74 after the 2018 season. The large, multi-purpose Jimmy Cribb Media Room will host all executive, coach, and player press conferences as well as providing a home for local media.

With the new space, the franchise has focused on expanding the offerings in its digital portfolio. Although the production team is still leaning on postproduced content, the control room and main studio will allow live productions during key moments on the NFL calendar: free agency in March, the NFL Draft in April, and Training Camp throughout the summer months.

Having played a part in two other studio builds — the Minnesota Vikings in 2018 and the San Francisco 49ers in 2019 — Kegley has experience driving content within a new space. 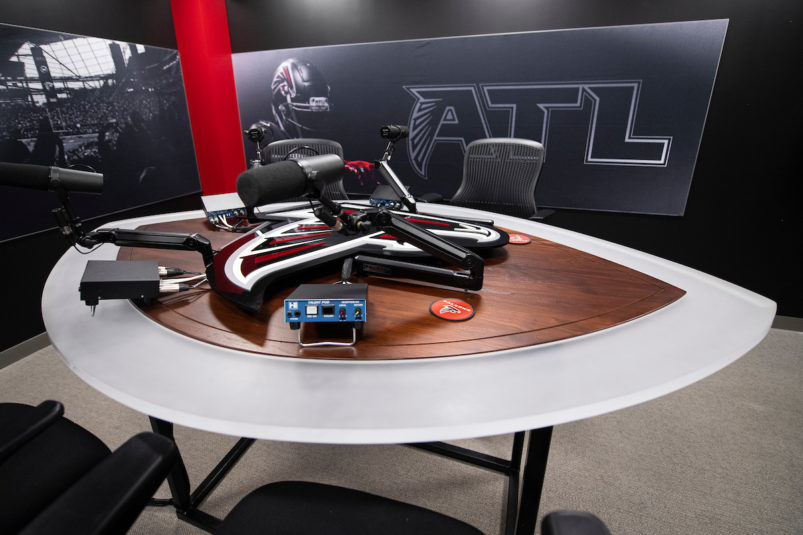 Audio content will be centralized in the podcast studio.

“These tentpole events in the offseason is where the studios will get stress-tested,” he says. “We’re going to have a bit of a phased approach; we’re not just going to do a two-hour live show right away. We still need to plan all of the serialized content that we do during the season, but this studio is going to alleviate a lot of our problems.”

As the crew becomes more advanced with the workflows and rhythm of the new strategy, the content calendar will eventually feature a lot of day-to-day material, including pre/postgame analysis and weekly previews. And, since the new space is all theirs, the production team has full autonomy over the studios.

“As we talked with a few other teams in the league as well as the NFL,” says Hittel, “we started to see the opportunity a studio would bring. We can now be very reactive to breaking news and other time-sensitive information.”

From a sales perspective, the new studios were given boost by the Falcons’ partnership with Ticketmaster, considered the premier ticketing destination for sports events, concerts, and other performances. Ticketmaster’s backing has elevated the brand recognition of the Falcons and their digital content. Then-AMBSE Chief Revenue Officer Tim Zulawski, who was recently promoted to president, was instrumental in getting this deal done.

“There are a lot of things that Ticketmaster is going to be presenting,” says Kegley, “not only the studio but the content produced within the studio to a large degree, with several series that we’ve worked with them on. This [deal] certainly doesn’t get done without our partnerships team being able to sell our dream and vision.”

Since the studio’s opening, the production team has mapped a long-term path for success. The studio not only will allow increased output of content but will maximize the time spent with players.

“Previously, we were able to do only so many features,” says Hittel. “Now we’re going to exponentially increase that amount to open up our players to the fans. Increasing both quality and quantity is going to be awesome for us.”