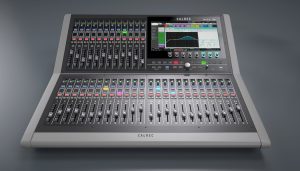 Br.IO is an easy and affordable way to expand Brio’s IO. Like other Calrec IO boxes, Br.IO offers both primary and secondary connections to a Hydra2 network for full redundancy. Users can connect either copper or fibre directly to the Hydra2 port on the rear of the console via the optional Hydra2 module. Combined with an H2Hub, which acts as a portable hub or switch point, multiple Br.IOs can be added to deliver greater flexibility quickly to support a variety of live productions.

“Launched to great acclaim at NAB earlier this year, Brio offers a good combination of IO on its surface so you can be up and running immediately,” says Dave Letson, Calrec’s vice president of sales. “We understand the need for expansion, so Br.IO now offers a quick, easy, and affordable way of doubling Brio’s IO.

“Simply plug the Br.IO into the ports on the rear of the Brio for a fully redundant connection. Like all Hydra2 IO, the Br.IO will be instantly detected by the console and available to use straightaway. There’s nothing to it.”

Calrec Audio will showcase Brio and Br.IO, together with several other new innovations in its product line, at IBC2016 on stand 8.C61.